Go big or go gnome. The New York Times bestselling authors of Kill the Farm Boy welcome you to the world of Pell, the irreverent fantasy universe that recalls Monty Python and Terry Pratchett.

“A complete delight, as fluffy and fun as The Lego Movie and as heartfelt as Harry Potter and the Sorcerer’s Stone.”—Locus

War is coming, and it’s gonna be Pell.

On one side stand the gnomes: smol, cheerful, possessing tidy cardigans and no taste for cruelty.

On the other side sit the halflings, proudly astride their war alpacas, carrying bags of grenades and hungry for a fight. And pretty much anything else.

It takes only one halfling bomb and Offi Numminen’s world is turned upside down—or downside up, really, since he lives in a hole in the ground. His goth cardigans and aggressive melancholy set him apart from the other gnomes, as does his decision to fight back against their halfling oppressors. Suddenly Offi is the leader of a band of lovable misfits and outcasts—from a gryphon who would literally kill for omelets to a young dwarf herbalist who is better with bees than with his cudgel to an assertive and cheerful teen witch with a beard as long as her book of curses—all on a journey to the Toot Towers to confront the dastardly villain intent on tearing Pell asunder. These adventurers never fit in anywhere else, but as they become friends, fight mermaids, and get really angry at this one raccoon, they learn that there’s nothing more heroic than being yourself.

In No Country for Old Gnomes, Delilah S. Dawson and Kevin Hearne lovingly tweak the tropes of fantasy and fairy tales. Here you’ll find goofy jokes and whimsical puns, but you’ll also find a diverse, feminist, and lighthearted approach to fantasy that will bring a smile to your face and many fine cheeses to your plate.

An excerpt from No Country for Old Gnomes

“Never trust quotes placed at the beginning of chapters as if they were diamonds of the brain. They were probably written by a halfling expressly for the purpose of deceiving you.”
—Gnomer the Gnomerian, in the Fourth Gnomeric Cycle

In a hole in the ground there lived a family of gnomes. Not a yucky, moist, gross hole filled with worm tails and old chicken bones, nor yet a dusty, crusty, sandy hole entirely lacking modern plumbing and ergonomic seating: It was a gnomehome, and that meant tidiness and comfort.

In this particular moment, however, there was strife. There was, in fact, a Mighty Row. Onni Numminen had finally had enough of his twin brother’s ungnomeric antics.

“Offi, you can’t wear that thing to the Midsummer Shindig. It’s ridiculous.”

Offi looked down, the gaslights flashing off his glasses. “Why not? It’s a cardigan. All gnomes wear cardigans. And you must admit it’s tidy. I’m following all the rules.” He tugged his scraggly beard in a way gnomes did when they thought they were getting away with something, which only annoyed Onni more.

“But it’s black! With rabid purple bats on it!”

The very sight of the thing nearly made Onni’s brain short-circuit. Tidy sweater, never better! was one of the very first gnomeisms every gnomelet learned in gnomeschool, but it was assumed the sweaters would be in bright colors and feature embroidered ducks, pineapples, or tulips, cheerful symbols of gnomeric togetherness. It was true that Offi had knit himself a finely crafted cardigan, but it was entirely the wrong color. What kind of gnome would wear black? And then he had gone and lovingly embroidered creepy purple bats on it, their eyes made of shiny red buttons. Offi was correct: Technically, there was nothing wrong with it. But it was obvious to anyone with eyes that Offi Numminen wasn’t being . . . gnomeric.

And that was the worst thing a gnome could do, outside of steal­ing pudding or shaving off his or her beard.

“You can’t wear it to the shindig,” Onni repeated, tugging his own scruffy beard in exasperation. “I won’t allow it.”

Offi gave him a dark look, in part because that was one of only two looks Offi could give these days, the other being one that said that life was merely a slow trudge toward death and Offi’s soul was a black repository for pain.

Onni hated both looks, and gnomes weren’t supposed to hate any­thing, except an untidy sock drawer. And halflings. And anyone who called them “knee-high,” since they had their own knees and were appropriately taller than said body parts.

“I can so wear it, and I will, and you don’t get to allow me any­thing. I’ve tried to be like you, Onni, and where did it get me? No­where. Pretending to be happy never made anyone happy. Do you know what it’s like, being me, and you being you? Knowing everyone thinks my twin is the poster boy for gnomeric youth? By dinkus, they gave you a medal that straight up says paragon of gnomeric youth on it. And I have to stare at it all the time.”

He glumly glanced to where the medal hung on a plaque amidst dozens of other medals proudly proclaiming things like exemplar of togetherness and tidiest cardigan and spiffiest hat and wow, what a gnome. And then they both glanced to Offi’s identical plaque, which featured only one sad, smallish medal, reading eats pudding with minor gusto.

For once, Onni tried to see things from his brother’s point of view. Onni considered himself a foine boy, and not only because he had three foine boy medals. But he tried. He actively wanted to make his parents proud by being the most gnomeric of gnomes. He got along. He spouted the gnomeisms whenever appropriate. He did his best to be round, affable, and clean and to wear only the brightest colors.

Whereas Offi had recently slid into the darkest acceptable colors: navy blue, forest green, and a particularly virulent shade of plum just this side of a bruise. He was appropriately round and clean, but not even a curmudgeonly badger would consider him affable. He was grim. He was dour and even verging on sour. He was, in essence, Not Jolly.

Onni’s twin increasingly turned away from people and sought his quiet corner of their father’s workshop, where Offi put on his unac­ceptably greasy work cardigan and tinkered with Old Seppo’s broken or forgotten machines. Why, Offi hadn’t even gone to the Everybody Goes to This Dance dance! He was destroying Onni’s social capital, and that was one thing Onni couldn’t abide. So he tried another tactic.

“If you wear that to the Midsummer Shindig, you’ll break Mama’s heart.”

Offi glared. “Mama loves Papa, and he’s not the most gnomeric of gnomes.”

Onni snorted. “That’s different, by dinkus! He’s a war hero. They’re allowed to get peculiar. And he still wears appropriately bright cardi­gans. Besides, he’s starting to get a reputation in town—you know that. Paranoid, they call him. Just last week at the beard salon, I heard Una Uvulaa call him Crazy Old Seppo.”

That finally brought fire to Offi’s eyes, a rare third look that ap­peared to be Characteristically Ungnomeric Rage. “Did she mention he installed one of his Halflings Hate This Heat-Resistant Hatch hatches for her? Because they may talk about him behind his back, but the foine folk of Pavaasik still rely on him to keep their homes safe from halfling firebombs.” A flash of worry lit Offi’s eyes, and Onni frowned at the shadows around them. By hokum, had his batty twin lined them with soot? They were all . . . soulful.

“It’s getting worse, you know,” Offi continued. “Pooti Pinkelsen’s whole family exploded last week. The halflings’ firebombs are getting worse. I heard Papa telling Mama about it. If they’d had one of Papa’s hatch covers, they wouldn’t have had their giblets blown up. So our love of gadgetry trumps your love of . . . getting along. You can’t get along if you’re dead.”

Onni’s hands clenched into fists, and he regretted starting the row. Gnomes were proud of their round stomachs but had little stomach for fighting.

“Look, Offi, gadgetry has its place, but the heart of our strength will always be people. As Mama always says, Stick together, tough as leather!”

Offi rolled his eyes, shocking Onni. For all that they were twins, identical down to their blue eyes and golden curls, distinguishable only by Offi’s black-rimmed spectacles—which were honestly mostly for show—Onni was quite sure he had never rolled his eyes in such a deliberately rebellious manner. His brother was on dangerous ground.

“Onni, how do you not get it? The halflings are dropping firebombs into our homes—seemingly just for fun, I might add—and that’s not going to stop because everyone wears a nice cardigan and holds hands while singing ‘The Get-Along Song.’ They tried that once, and everyone blew up! Everyone we know is blowing up! My cardigan is not the problem. Father is right. We need weaponry. And not the sort that hurls waistcoats at squirrels to hide their shame. Real ma­chinery, like he built during the Giant Wars.”

“Not this again!” Onni moaned.

“The teacher had a natural prejudice against glasses!”

“You had oil on your cardigan!”

“You had . . . er, charm on yours!” Offi tried, pushing up his glasses and glaring at Onni.

“Not this again,” Onni moaned.

And that’s when they heard the BOOM!

“Firebomb!” they said in unison. 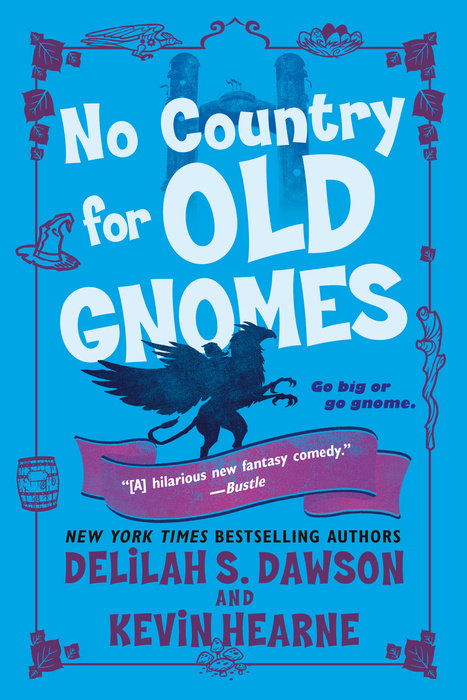