This princess can shave herself! The hilarious bestselling authors of Kill the Farm Boy and No Country for Old Gnomes are back with a new adventure in the irreverent world of Pell.

Once upon a time, a princess slept in a magical tower cloaked in thorns and roses.

When she woke, she found no Prince Charming, only a surfeit of hair and grotesquely long fingernails—which was, honestly, better than some creep who acted without consent. She cut off her long braids and used them to escape. But she kept the beard because it made a great disguise.

But these are no ordinary pirates aboard The Puffy Peach, serving under Filthy Lucre, the one-eyed parrot pirate captain. First there’s Vic, a swole and misogynistic centaur on a mission to expunge himself of the magic that causes him to conjure tea and dainty cupcakes in response to stress. Then there’s Tempest, who’s determined to become the first dryad lawyer—preferably before she takes her ultimate form as a man-eating tree. They’re joined by Alobartalus, an awkward and unelfly elf who longs to meet his hero, the Sn’archivist who is said to take dictation directly from the gods of Pell. Throw in some mystery meat and a dastardly capitalist plot, and you’ve got one Pell of an adventure on the high seas!

In this new escapade set in the magical land of Pell, Delilah S. Dawson and Kevin Hearne lovingly skewer the tropes of fairy tales and create a new kind of fantasy: generous, gently humorous, and inclusive. There might also be otters.

An excerpt from The Princess Beard


Atop an Ivory Tower Crammed Perilously Close with Foine Books

But do not call me late to brunch.

For I am the mouthpiece of the god Pellanus, and it is a tiring job, and I am an old elf in possession of dodgy knees and a distaste for mimosas. I was once a carefree elfling sprig, enjoying the heady pleasures of the Morningwood, but then I received the Call. It was as if the double-headed god spoke directly to me with both mouths.

“Itchie,” the god boomed, a male and female tone merging.

“Yes, hello?” I said, because that is called conversation.

“You are to be the next Sn’archivist,” the god continued.

And then there was a long and awkward pause, and I suppose Pellanus felt as confused about the whole thing as I did, because every time I tried to speak, so did they.

And thus I did shut up, because Pellanus is a capricious god, and spontaneous combustion is real.

The god paused. “Sure. If you say so. You see, the last Sn’archivist is but a ghost, and you will replace her.”

I took a moment to consider it.

“Forgive me, O Pellanus, but that does not sound like a good job offer,” said I.

“It is not an offer!” the god boomed, both voices ripe with fury. “It is a holy order! This is the Call. Not like a regular call, but the Call, with a capital C!”

“Ah,” I said again, because I was quite determined to become a door-to-door sales elf. “Are the benefits good?”

And with that, I told King Glosstangle of my sacred duty, was roundly laughed out of the Morningwood, and found the fastest ship to the Siren Sn’archipelago. There, just as Pellanus promised, I found a tower. Within that tower, I found a corpse, which was very dead, as Pellanus had also promised. I also found a fleet of helpful monks dedicated to my care; the benefits were indeed good. The first thing I did was to ask the monks to remove the skeleton as well as the ruined rug beneath it. The next thing I did was to request a new rug, plus a citrus salad, a journal, and a quill.

For Pellanus had just begun to speak to me, and I had much to record.

Now I have a purpose.

And that purpose is driven by schedule.

Pellanus has just informed me that proper Fantasy books are always written in third person past tense, and so I will switch. Are you ready? Because, you see, I will no longer speak as I, Itchmael, but will begin telling a different story about other people, mostly. Still, when you see the Sn’archivist, that’s me. I mean him. I mean, I am him.


The Sn’archivist, a most wise and clever fellow, lived according to the schedule given him by the even wiser and cleverer god, Pellanus.


The schedule was simple but sacrosanct. The schedule, at this point, was as much of a biological imperative for the Sn’archivist as eating, sleeping, or visiting the boom-boom room. And after waking, and blatting a sonorous blort on the tower boghorn, and quaffing three cups of kuffee and a rasher of boar bacon, it was time for him to write, without fail—and generally without variation.

For uncounted years he had written tirelessly about the same subject. A vital subject, to be sure, for it was the secret source of joy throughout Pell, but he’d begun to wonder in recent months about whether he was accomplishing anything, since he’d filled floors of bookshelves with volumes on the subject but no one ever came to read them. What was the point of possessing such knowledge if it was never shared? He often read aloud to his shining gnomeric construct, Reginald the Affirmation Gecko, but that didn’t count. Reginald never retained anything he heard. He only spouted one of his many thousands of affirmations whenever the Sn’archivist required a response and, when lacking the proper affirmation, congratulated the Sn’archivist on continuing to exist. Your wit is a shining beacon of hope in a dark world! the gecko might say, or simply, Wow! Nice elbows, pal!

The location of his tower might have had something to do with the poor distribution of his work, the Sn’archivist mused. Perched on the eastern precipice of an island in the Sn’archipelago, his home was hardly convenient to the populace of Pell, and he was not entirely sure they knew of his existence. He was supplied and fortified by the Sn’archdruid and a handful of monkish Sn’acolytes who looked after gardens of produce and herds of livestock, but they never asked to read his tomes. They sat around their campfire at night and listened to the Sn’archdruid tell them stories and sing them bawdy ballads about the early, earthier days, when Pellanus had been but a young and gawky god, but whenever the Sn’archivist tried to join them and sing songs of his knowledge, they fell silent and looked at their shoes and soon made excuses to go back to their holy hovels.

Ah, well. No matter. He’d always known that following the Call would isolate him socially as well as geographically. He had his work and his gecko, and that would have to be enough. The Sn’archivist had just finished another volume yesterday and shelved it lovingly on the tenth-floor anteroom. This morning he would start a new book, putting quill to paper and letting the knowledge of years and the enlightenment of Pellanus pour out of him. But after his first cup of kuffee he didn’t feel like frying up the usual rasher of boar bacon. Instead, he wanted something different. He wanted . . . oatmeal! With fresh fruit! Fiber, by Pellanus! And vitamins! He rummaged in his pantry, searching for the oats, already feeling that something extraordinary was about to happen. He was about to deviate from the schedule. Indeed, he already had! Whether this would prove to be the beginning of something remarkably fine or remarkably tragic he did not know, but the prospect of variety was like a siren’s call, irresistible and alluring.

Soon enough he sat before a bowl of oats topped with raspberries, blueberries, slivered almonds, and brown sugar. And when he sampled his first spoonful—oh, what splendid magnificence! An explosion of taste with a muted subtext of circulatory health benefits!

“Reginald,” he declared, “this oatmeal is delicious.”

The gold-and-silver affirmation gecko blinked and cocked his head, tiny gears turning audibly in his skull as he considered a reply. “Think of how happy you’re making your colon right now!” Reginald said. “You’re just a super dude!”

The Sn’archivist grunted happily and continued eating. And then, halfway through his breakfast, after his second cup of kuffee but before his third, a voice spoke into either ear, except it was two voices: A woman’s in his left ear and a man’s on his right. Identical tones and inflections, but octaves apart.

“Today, you will write a different book,” the voice intoned, and the Sn’archivist froze, not wanting to miss a single word. It was the voice of the great two-faced god Pellanus, gracing him with divine inspiration, as it once had so long ago, when he’d received the Call. He was to write a single book on a new subject, display it in a place of honor, and then point it out to whoever next came to call on him in the tower.

And then the double voice told him the subject of the new book.

The Sn’archivist dropped his spoon, oatmeal forgotten, and gulped down his last cup of kuffee. He rushed downstairs to the third floor, where his writing desk was, and ran his thin fingers over the stack of blank books waiting in a crate beside it. He pulled them all out and inspected them, wishing to choose the most flawless specimen for what was to be a truly special work. Several had small tears on the corners of the pages. Others had tiny scuffs on the cover. But eventually he picked one that seemed closest to perfection, with crisp ivory sheets and a rich ruby cover, and he placed it reverently on his desk.

Today was different because today he would write something different. Something important! The oatmeal had been a herald of the divine! He was a conduit for powers far beyond those of most mortals! He dabbed his quill in the inkpot, paused briefly over the paper to savor the moment, and then he scratched out two words, pregnant with meaning, on the first page:

Yes. That was it! That was it exactly. He didn’t know exactly what it was, only that those two words were most definitely, exactly, it. He could feel that he had written something vital. Something crucial. Words with the power to save lives.

But he rather hoped no one asked him to explain how. 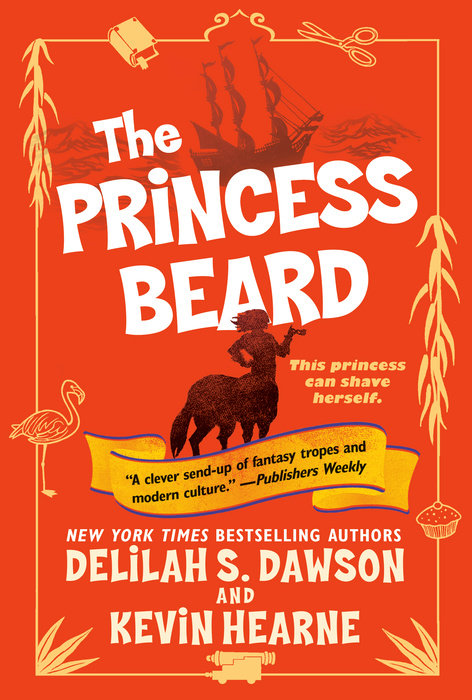