When Kate Campbell’s life in Manhattan suddenly implodes, she is forced to return to Sea Point, the small town full of quirky locals, quaint bungalows, and beautiful beaches where she grew up. She knows she won’t be home for long; she’s got every intention (and a three-point plan) to win back everything she thinks she’s lost.

Meanwhile, Miles Hoffman—aka “The Prince of Sea Point”—has also returned home to prove to his mother that he’s capable of taking over the family business, and he’s promised to help his childhood best friend, Ziggy Miller, with his own financial struggles at the same time. Kate, Miles, and Ziggy converge in Sea Point as the town faces an identity crisis when a local developer tries to cash in on its potential. The summer swells, and white lies and long-buried secrets prove as corrosive as the salt air, threatening to forever erode not only the bonds between the three friends but also the landscape of the beachside community they call home.

Full of heart and humor—and laced with biting wit—Rock the Boat proves that even when you know all the back roads, there aren’t any shortcuts to growing up.

An excerpt from Rock the Boat

Kate Campbell opened her eyes but couldn’t see a thing. It was the middle of the night and, like a young Miss Clavel only less French and more ginger, she knew something was not right. Recalling the details of the previous evening, however, she realized it was just the opposite—­nothing was wrong, and everything was finally about to be extremely right.

Kate smiled in the dark as all the evidence accumulated to form an arrow pointing at a singular fact: Thomas would propose to her in the morning. Wriggling back under the covers, Kate grinned as she imagined what everyone would think besides It’s about time. Of course it was about time; it had been twelve years.

Despite—­or maybe because of—­the countless, candid conversations they’d had about how and when to get engaged, Kate was shocked that Thomas would spring this on her. It was impressive, really, to still surprise someone after more than a decade of dating (never mind those two rocky breaks when he was stressed in med school, or those six months his first year of surgical residency, or this second fellowship). They’d agreed forever ago that the only real incentive to marry would be if they wanted to start a family, and they hadn’t even discussed children in the last six months because Thomas’s fellowship was basically Kill Bill only in long, white coats and with far more blood.

But the end of the fellowship was finally in sight with an offer at the same hospital, and their conversation the night before was undeniable evidence of an imminent proposal. They’d been in a cab crossing back over the Brooklyn Bridge, Kate watching the fare tick up and up, when Thomas had asked if she’d like to go to brunch at Norman’s in the morning.

“With Aggie and Marta?” Thomas’s sister and sister-­in-­law lived above them in the building Thomas’s grandparents owned. They would carpool to New Hampshire together for Easter Sunday, just as they’d done every Easter since they were twenty-­two.

“Just us,” Thomas had said, as he continued to stare down at his phone. This calculated attempt to plan a casual brunch without Aggie and Marta seemed odd to Kate, like inserting a key only to find the door already unlocked. It momentarily jostled her out of her midnight stupor, but she had been too tired to explore what Thomas’s suggestion might mean—­until now, hours before dawn, when his odd behavior had, poof, turned into proof.

But proposing in April? Kate wrinkled her nose. April in New York was horrific—­an open sewage drain of a month with damp clothes and nagging colds, everyone trudging through the office as bedraggled and psychotic as the Times Square pigeons. Kate had assumed that if this was going to be the year, Thomas would have waited for May, and asked while they were on vacation with his friends.

As the sun rose, however, Kate warmed to Thomas’s strategy: He would pop the question now so they could then drive up to New Hampshire to celebrate with the Mosby clan over Easter. She hoped but doubted that Thomas had thought to include her family in some way, which was not his strong suit, only because his family was big and fun and . . . a lot. All three generations and extended branches of Mosbys lived here in the city, mostly on the Upper East Side but everyone in Manhattan, or what Thomas jokingly referred to as “the only island that matters.” It was easy enough to forget that Kate did come with her own small family of four from a tiny beach town in New Jersey. Technically, Sea Point was only a three-­hour drive from the city—­the same distance as New Hampshire—­but it felt worlds apart from her life in New York because the rest of the Campbells found the city as daunting as Thomas found Sea Point “quaint.”

Kate closed her eyes and hoped the sleepless night wouldn’t show on her face when they asked a stranger to snap their picture after she’d said yes—­or maybe Thomas had hired a photographer to hide in the bushes for candids? She wondered if he had thought to size his grandmother’s engagement ring just before emitting a low groan: She had become the kind of person she despised, and she wasn’t sure whether to blame her work, her generation, or herself.

As a rising star at Artemis Public Relations, Kate’s craft was bending stories into taglines. Recently, she’d caught herself treating her own life like a client’s portfolio, and her online profile reflected her professional life’s permeation into the personal—­her photos were flawless, her captions simple and clever. Kate envisioned colleagues, acquaintances, and ghosts from the past viewing her engagement photo with envy, even googling Thomas. In two days, she’d post a cute photo—­the ring tastefully included but not prominently featured—­with a low-­key caption, something along the lines of: We did a thing.

Three hours later, Kate encouraged Thomas to take his time in the shower so she could strategize her caught-­off-­guard look. Each hanger held a jacket or sweater that wouldn’t be good enough for her future mother-­in-­law, Evelyn, who would apologize to her friends for Kate’s poor taste as they pinched her phone screen and zoomed in to inspect every inch of the engagement photos. But here, this wasn’t bad—­a blue-­checked dress Thomas had once said made her look like a sexy Raggedy Anne. The dress showed effort without letting Thomas know that she knew.

“Done yesterday,” Thomas called over the high-­pitched groan of the pipes. The water pressure was barely more than a sad dribble, but Kate wasn’t about to complain after four years living rent free. Then again, Kate thought, maybe she could raise the issue once she became a Mosby.

Running a brush through her hair and a rake through her thoughts, Kate found herself feeling triumphant rather than joyful—­or maybe joyfully triumphant. She’d put in so much time, given all of her twenties to this relationship, and endured a decade’s worth of saccharine smiles from ancient strangers inquiring, “So when do you think you’ll . . . ?”

The imminent proposal felt validating in a way that probably wasn’t especially feminist, and yet, wouldn’t anyone feel victorious when they finally saw the big return on their risky investment? And it had been downright dicey at times—­after twelve years, the bottom had dropped out more than once, usually in direct correlation to where Thomas was in the medical gauntlet. Even last night at the party, Kate had worried they were heading toward the red when she’d gestured to the spinach stuck in his front teeth and Thomas had rolled his eyes before skulking off, leaving her alone in the kitchen.

Now, Kate gave herself a once-­over in the mirror: Her strawberry-­blond hair rippled down in obedient, tame waves, the freckles across her nose were visible but not chaotic like they would be by mid-­June. The dark, pronounced eyebrows she’d hated as a kid were cooperating today, and after she’d drawn a bronze rim around her wide green eyes, Kate took private delight in the double takes that her heart-­shaped face so often invited.

Just last week, she’d been confused for the breakout actress from that Netflix show while ordering at Barney Greengrass. Kate no longer blushed when she disappointed strangers bold enough to approach her—­in fact, she wore big black sunglasses to encourage such speculation. Tourists came from small towns like hers to gawk at the city’s glamour and so Kate indulged in their celebrity-sighting fantasies not only because it was fun but also because it proved just how far she had come since arriving in New York fifteen years ago as a college freshman.

The toilet flushed and the bathroom door opened.

“You look nice,” Thomas said, checking his hair in the mirror. “Where’s my putty?”

Kate handed him the hair product half hidden under her brush—­it arrived every month from a tiny shop in Vancouver and cost more than their utility bills—­but he wouldn’t know that. Thomas dropped his keys twice before successfully tucking them into his jacket pocket. Nerves, Kate deduced, flashing him a well-­glossed grin. “We haven’t been to Norman’s in ages!” she announced to Thomas’s reflection in the hallway mirror.

“Back to where it all began,” he replied, slipping his bare feet into the walking loafers to which the entire Mosby clan subscribed.

Beck Dorey-Stein grew up in Narberth, Pennsylvania, and taught high school English for three years before serving as a White House stenographer from 2012 to 2017. Her first book, From the Corner of the Oval, was a New York Times bestseller. She now lives on the coast of Maine. 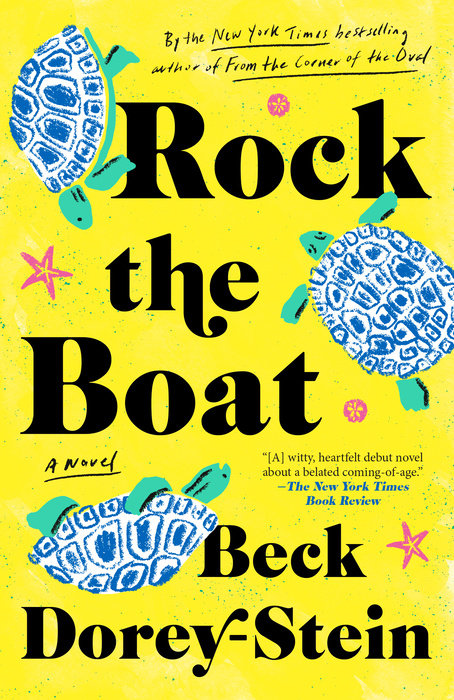