The People, the Politics, and the Promise That Launched America into the Space Age

JFK issued the historic moon landing challenge. These are the stories of the visionaries who helped America complete his vision with the first lunar landing fifty years ago.

A Companion Book to the AMERICAN EXPERIENCE® Film on PBS®

Going in depth to explore their stories beyond the PBS series, writer/producer Robert Stone—called “one of our most important documentary filmmakers” by Entertainment Weekly—brings these important figures to brilliant life.

In 1961, President John F. Kennedy proposed the nation spend twenty billion dollars to land a man on the Moon before the end of the decade. Based on eyewitness accounts and newly discovered archival material, Chasing the Moon reveals for the first time the unknown stories of the fascinating individuals whose imaginative work across several decades culminated in America’s momentous achievement. More than a story of engineers and astronauts, the moon landing—now celebrating its fiftieth anniversary—grew out of the dreams of science fiction writers, filmmakers, military geniuses, and rule-breaking scientists. They include

• Science fiction author Arthur C. Clarke, whose writing inspired some of the key players in the Moon race. A scientific paper he wrote in his twenties led to the U.S. beating Russia in one area of space: communications satellites.
• Wernher von Braun, the former Nazi military genius who oversaw Hitler's rocket weapons program. After working on ballistic missiles for the U.S. Army, he was recruited by NASA to manage the creation of the Saturn V moon rocket.
• Astronaut Frank Borman, commander of the first mission to circumnavigate the Moon, whose powerful testimony before Congress in 1967 decisively saved the U.S. lunar program from being cancelled.
• Poppy Northcutt, a young mathematician who was the first woman to work in Mission Control. Her media exposure as a unique presence in this all-male world allowed her the freedom to stand up for equal rights for women and minorities.
• Edward Dwight, an African American astronaut candidate, recruited at the urging of the Kennedy White House to further the administration’s civil rights agenda—but not everyone welcomed his inclusion.

Setting these key players in the political, social, and cultural climate of the time, and including captivating photographs throughout, Chasing the Moon focuses on the science and the history, but most important, the extraordinary individuals behind what was undoubtedly the greatest human achievement of the twentieth century.

An excerpt from Chasing the Moon

The book in the shop window caught the boy’s attention immediately. The vibrant purple dust jacket depicted a bullet-­shaped machine trailed by an arc of orange flame. If there was any doubt in Archie Clarke’s mind what the illustration was intended to depict, the book’s title, The Conquest of Space, made it obvious. It was a spaceship. The captivating image reminded him of the colorful covers of the American science-­fiction magazines that he had seen in the back room of Woolworth’s.

Spectacled fourteen-­year-­old Archie peered into the small W. H. Smith bookshop located a short distance from his grandmother’s house on England’s Bristol Channel. Dressed in short pants and an Oxford shirt, Archie was walking with his aunt Nellie toward Minehead’s main shopping arcade. It was 1932, and Archie had recently lost his father, after a long illness exacerbated by injuries sustained during a German poison-­gas attack in World War I. He routinely visited his grandmother and aunt in the small but active southwest England beach resort during the weekends and holidays, leaving his mother freer to attend to his younger siblings on the remote family farm a few miles away.

Nellie Willis, a tall young woman with an intelligent face framed by a brown bob, doted on her clever nephew. She could see that the book displayed in the shop window fascinated him. Despite the family’s struggling finances, she gave Archie the “six and seven”—­six shillings and seven pence—­to purchase it and bring it home.

But when Archie opened the book, he discovered it wasn’t the adventure story that he had expected. Instead, he was looking at a book detailing the fundamentals of rocket science—­astronautics—­supplemented with an imagined account of the first journey to the Moon. Until this moment Archie had assumed space travel was a fantasy. Now he learned that it was actually possible for humans to leave their planet and explore space and that it could happen in the not-­too-­distant future.

Decades later, as one of the world’s leading masters of science fiction and the co-­author of 2001: A Space Odyssey, Arthur C. Clarke would point to that day in 1932 as the moment his life changed. His imagination had been energized by a book, prompting him to wonder about what it might be like when humans began to explore space. In the early 1930s, few in government, media, or business regarded human space travel as a serious possibility. But in Archie Clarke’s mind it held transformative and liberating options. If the human species could escape the confines of gravity, was it conceivable that other fantastic possibilities might come to pass in the near future as well?

Archie’s fascination with the promise of space travel would motivate and determine the direction of his life following that chance encounter with The Conquest of Space. He joined a small cadre of visionaries, theorists, and space-­travel advocates whose youthful dreams, curiosity, and determination led directly to humanity’s first steps on an alien world only three decades later.

The theoretical mathematics upon which all rocket science was based had begun to circulate in prominent scientific journals only a decade before the publication of The Conquest of Space. In the early twentieth century, three independent-­minded theorists, intrigued by the idea of space travel after reading works of science fiction as adolescents, attempted to solve the theoretical physics necessary to carry out an actual escape from Earth’s gravity. Working autonomously, Russia’s Konstantin Tsiolkovsky, American professor Robert Goddard, and physicist Hermann Oberth in Germany conducted their research and study in each of the three countries that would later witness the most decisive events of the early space age. All three theorists were social outsiders intrigued by utopian ideals, and each harbored a personal belief that space travel would inevitably transform human destiny.

The first stirrings of the modern space age arose not in a wealthy industrial nation but in agrarian czarist Russia. At the turn of the century, a popular spiritual philosophy called cosmism—­a mixture of elements from Eastern and Western thought, animism, theosophy, and mystical aspects of the Russian Orthodox Church—­had influenced a new generation of writers, scientists, and intellectuals. For Russian cosmists, space travel would be the ultimate liberation; once the shackles of the Earth’s gravity had been removed and humans inhabited space, the souls of the dead would be resurrected and all humanity would partake in cosmic immortality.

The founding philosopher of Russian cosmism, Nikolai Fedorov, a noted librarian and scholar, chose to personally tutor a bright but impoverished teenager who had been prohibited from attending school due to severe deafness. The student, Konstantin Tsiolkovsky, had an eccentric and strikingly independent intellect and within a few years was hired as a small-­town schoolmaster, despite his disability. In his spare time, Tsiolkovsky conducted independent research on many scientific subjects, including space travel. He had read Jules Verne’s From the Earth to the Moon during his adolescence, and later he even tried his hand at writing his own fictional scientific romances.

In 1903 Tsiolkovsky published a scientific paper that contained the first appearance of what came to be known as the “rocket equation,” a mathematical formula comparing a rocket’s mass ratio to its velocity, the essential calculation necessary to determine how to escape a planet’s gravity. Unfortunately, the importance of his publication went unnoticed; the Russian scientific community ignored his work, dismissing it as the musings of an amateur. His paper would remain unread for another twenty years. Undaunted, Tsiolkovsky continued his studies, going on to publish nearly four hundred scientific papers on such matters as space-­vehicle weightlessness, the operation of multi-­staged launch vehicles, the orbital dynamics of differing rocket burns, and the scientific advantages of polar orbits.

A full decade after Tsiolkovsky’s groundbreaking paper, in 1913, a French aircraft designer named Robert Esnault-­Pelterie independently published his own version of the rocket equation. But once again few took notice. In the United States, Robert Goddard, the second of the three pioneers of rocketry and a part-­time instructor and research fellow at Clark University in Worcester, Massachusetts, was quietly conducting his own rocket research. Entirely unaware of Tsiolkovsky or Esnault-­Pelterie, he submitted patent applications for both a liquid-­fueled rocket and a multi-­stage vehicle.

Like Tsiolkovsky, Goddard had also experienced social isolation during his formative years. A frail only child, he was kept out of school for extended periods due to ill health. As a result, he didn’t graduate from high school until age twenty-­one. During his solitary time at home he read stacks of books from the local library, particularly volumes from the science and technology shelves. He also read H. G. Wells’s science-­fiction classic The War of the Worlds, which made a lasting impression. At age seventeen in 1899, while aloft in the branches of a cherry tree on his family’s New England farm, Goddard experienced an epiphany that moved him so deeply that he noted the date on which it occurred. “As I looked towards the fields at the east, I imagined how wonderful it would be to make some device which had even the possibility of ascending to Mars. I was a different boy when I descended the tree from when I ascended for existence at last seemed very purposive.”

During World War I, while teaching at Clark University, Goddard obtained research funding from the War Department for an experimental tube-­launched solid-­fuel rocket rifle, an early version of what would become the bazooka. He also proposed a rocket that could ascend seventy miles into the atmosphere and carry high explosives or poison gas at least two hundred miles. But after the Armistice, no American military officials thought long-­range missiles a subject worthy of further research, so Goddard sought to find support elsewhere.

It was a technical paper funded and published by the Smithsonian Institution in 1920 that suddenly placed Goddard’s name on newspaper front pages around the world. “A Method of Reaching Extreme Altitudes” proposed that a rocket could be used for the scientific exploration of the atmosphere, placing artificial satellites into orbit, aiding weather forecasting, and physically hitting the Moon. His paper made no mention of human space travel to the Moon; however, many newspaper reports heralded his study with dramatic headlines implying Goddard was working on a moon rocket that would transport human passengers.

Robert Stone is an Oscar- and Emmy-nominated documentary filmmaker. He and his work have been profiled in The New York Times, The New Yorker, and Entertainment Weekly, among many other publications.

Alan Andres spent three decades in trade book publishing and managed a small magazine publishing enterprise. He served as a consulting producer and researcher on PBS’s Chasing the Moon.

The People, the Politics, and the Promise That Launched America into the Space Age 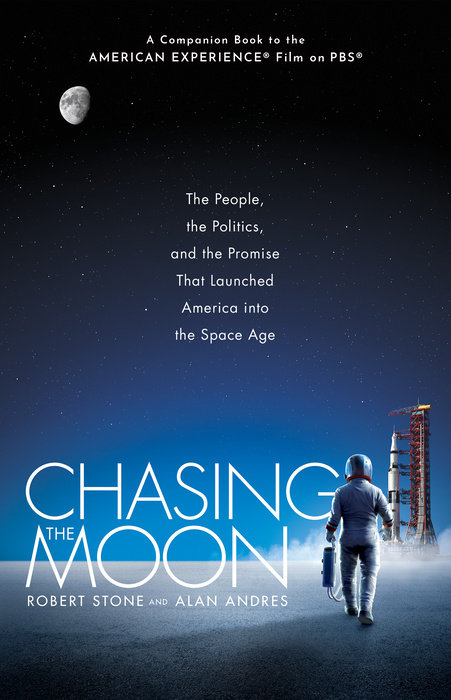