Warm, wise, and magical—the latest novel by the bestselling author of THE LITTLE PARIS BOOKSHOP and THE LITTLE FRENCH BISTRO is an astonishing exploration of the thresholds between life and death

Henri Skinner is a hardened ex-war reporter on the run from his past. On his way to see his son, Sam, for the first time in years, Henri steps into the road without looking and collides with oncoming traffic. He is rushed to a nearby hospital where he floats, comatose, between dreams, reliving the fairytales of his childhood and the secrets that made him run away in the first place.

After the accident, Sam—a thirteen-year old synesthete with an IQ of 144 and an appetite for science fiction—waits by his father’s bedside every day. There he meets Eddie Tomlin, a woman forced to confront her love for Henri after all these years, and twelve-year old Madelyn Zeidler, a coma patient like Henri and the sole survivor of a traffic accident that killed her family. As these four very different individuals fight—for hope, for patience, for life—they are bound together inextricably, facing the ravages of loss and first love side by side.

A revelatory, urgently human story that examines what we consider serious and painful alongside light and whimsy, THE BOOK OF DREAMS is a tender meditation on memory, liminality, and empathy, asking with grace and gravitas what we will truly find meaningful in our lives once we are gone.

An excerpt from The Book of Dreams

The fall only lasts a few seconds. I can hear the engines of the cars above me on Hammersmith Bridge. Rush hour. I smell the city, the fading fragrance of spring, of dew on the leaves. Then I plunge into the cold water and it closes over my head. I strike out with my arms, gathering speed as the receding tide carries me with it. Despite being more than thirty miles away, the sea sucks the river toward it. My body has not forgotten the tug of the tide; it’s as if I never left the sea, although it’s over twenty-five years since I last bathed in the Atlantic.

Finally I reach the girl.

The river is dragging her along. It wants to own her. It’s intent on breaking down her body into its constituent parts, severing her hopes from her fears, ripping the smile from her lips, and cutting off her future.

She’s sinking into the muddy waters. I dive and pull her closer by her hair. I manage to catch hold of a slender, slippery upper arm. I tighten my grip and gather my breath for the coming struggle. Salty, ice-cold water floods into my mouth. The Thames wraps me in its embrace.

Her face, with eyes the color of the wintry sea, floats toward me. She’s pinching her nose shut with the fingers of one hand, as if she had merely jumped into the lukewarm, chlorine-tinged water of a swimming pool. In fact, she has fallen from a boat, one of the many pleasure craft carrying tourists along the Thames. After climbing onto the second-highest bar of the boat’s railings, the girl had tilted her face to catch the May sunshine when a chance wave slapped against the hull, raising the stern and tipping the whole boat forward. The girl didn’t make a sound, but her eyes were brimming with boundless curiosity.

From Hammersmith Bridge we watched her fall—the kissing couple, the beggar in the threadbare tuxedo, and me.

The beggar jumped up from his “turf,” a piece of cardboard in a sunny spot against the suspension bridge’s green rail. “Oh my God!” he whispered. The couple turned to me. Neither they nor the beggar moved a muscle—they simply stared at me. So I clambered over the green cast-iron railing, waited until the small figure surfaced below me, and jumped.

The girl is gazing at me with more trust and hope than a man like me deserves. Of all the people in this city who might have been in a position to rescue her, it had to be me.

I lace my arms around her frail, wet body. The girl kicks out, and her feet catch me in the head and mouth. I swallow water, I breathe in water, but I still manage to make myself buoyant and push for the surface. The world grows louder again. The May wind feels mild on my wet face; the waves send spray into my eyes. I turn onto my back to form a bobbing, watery cot and haul the girl onto my chest so she can breathe and look up at the blue sky. In this position, we float down the Thames past brick facades and wooden boats moored to the muddy banks.

The kid splutters and gasps for air. She seems to be about four or five. I don’t have a clue about children, not even my own.

I start humming Charles Trenet’s La Mer, that majestic hymn to the beauty of the sea. Scraps of the French lyrics bubble up into my mind. I haven’t spoken my native tongue since I was eighteen, but now it comes flooding back.

As I sing, I gradually sense that the girl’s heart is settling into a calmer rhythm. I feel her little lungs pumping and her trust piercing the film of water and fear between us. I hold her tightly and use one arm to propel myself on my back toward the bank, where there is a small jetty. My clothes are sodden. I kick my legs like a frog and my ungainly one-sided crawl makes me look like a one- armed bandit.

“It’s going to be okay,” I whisper. I can hear Eddie’s voice clearly inside my head, as if she were there, whispering in my ear: “You’re not a good liar, Henri. It’s one of your greatest qualities.”

Eddie is the best thing that never happened to me.

My shoulder bumps into one of the floating barrels supporting the jetty. There’s a ladder within reach. I grab the girl by the waist and lift her up, pushing her tiny feet higher and higher until she finds a handhold and wriggles out of my grasp.

I follow her. I climb out of the river; pick up the exhausted child, who is desperately trying not to weep; and carry her past yellow, red, and gray houses back to Hammersmith Bridge. The girl entwines her arms around my neck and buries her face in my shoulder. She’s as light as a feather, but she gets heavier and heavier as I walk along, pursued by the nagging thought that I really need to hurry now to meet Sam. I must go to him. I must. My son’s waiting for me at his school.

The same couple is still standing there on the bridge, holding each other close. The woman looks at me in a daze, her eyes wide and shiny. The kohl swooshes at their corners and her beehive hairstyle remind me of Amy Winehouse. Holding up his smart- phone, the man keeps saying, “I don’t believe it. I don’t believe it, man. You actually got her. That was unbelievable.”

“Were you only filming or did you think of calling for help?” I hiss at him.

I put the girl down. She doesn’t want to let go, and her tiny hands cling to my neck before finally slipping through my wet hair.

All of a sudden I feel very weak and lose my balance. Incapable of standing upright, I stagger out into the road. The little girl screams.

Something big and hot sweeps into view over my shoulder. I see a twisted face through glass. I see a black bonnet, glinting in the sunlight, swipe my legs from under me. And then I see my own shadow rising at breakneck speed from the asphalt to meet me, and hear a noise like eggshells breaking on the rim of a china cup.

The pain in my head is a thousand times more intense than the agonizing twinge you feel when you bite into an ice cream. Everything around me goes quiet. Then I melt. I melt into the ground. I sink down, faster and faster, as if I were plummeting into a deep black lake beneath the asphalt.

Something is gazing up at me expectantly from the lake’s murky depths. The sky is receding all the time, its arc farther and farther overhead. I see the girl’s face up above, staring sadly at me as I seep into the stone with her oddly familiar eyes, which are the color of the sea in winter. Her oceanic eyes are now indistinguishable from the lake above me. I merge into the lake and its waters claim my body. Women and men cluster around the shores, obscuring the last patch of blue sky. I hear their thoughts inside my head.

The woman in the Mini tried to swerve out of the way.

From the way he stumbled out into the road, I thought he must be drunk.

I can make out the beggar in the threadbare tuxedo as he pushes the other people aside, offering me a fresh glimpse of the sky—the never-ending, beautiful sky.

I close my eyes. I’ll rest for a while and then get up again and continue on my way. I can just about make it there on time. It’ll take a while before the roll call for Fathers’ and Sons’ Day gets to Sam and me, to V for Valentiner, his mother’s surname.

We don’t know each other, and I think we should do something about that. If you agree, come to Fathers’ and Sons’ Day on 18 May at Colet Court. That’s part of St. Paul’s School for boys in Barnes. It’s on the banks of the Thames. I’ll be waiting for you outside.

I’LL BE RIGHT with you, Sam. I’m just having a little rest.

Someone prizes open my eyelids. The lakeshore is far, far away, high above me, and a man is calling down from the rim of the hole. He’s wearing a paramedic’s uniform and gold-framed sun- glasses. He smells of smoke. I can see my reflection in his shades. I see my eyes go dull and glaze over. I see the paramedic’s thoughts.

A long shrill beep draws a straight line under my life.

The long beep swells into a final drumroll.

NINA GEORGE is the author of the bestselling international phenomenon The Little Paris Bookshop, as well as numerous other books that have been published around the world. She also works as a journalist, and advocate for writer and women’s rights. She lives with her husband in Berlin and Brittany, France. 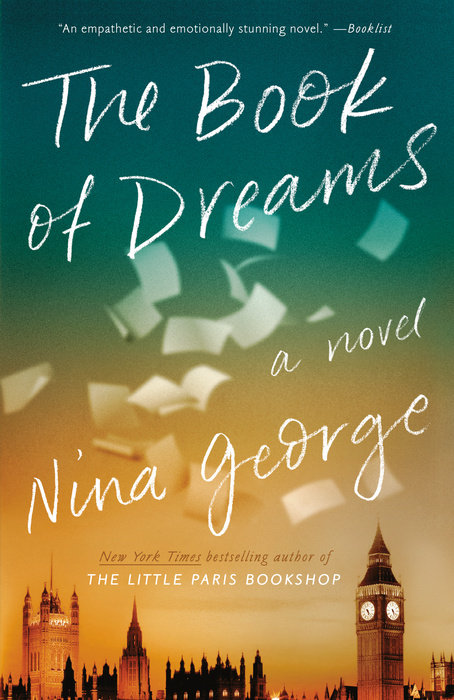