A fabulous adventure into the last frontier of man!

Attention! This is the last message you will receive until your mission is completed. You have sixty minutes once miniaturization is complete. You must be out of Benes’ body before then. If not, you will return to normal size and kill Benes regardless of the success of the surgery.

Four men and one woman reduced to a microscopic fraction of their original size, boarding a miniaturized atomic sub and being injected into a dying man's carotid artery. Passing through the heart, entering the inner ear where even the slightest sound would destroy them, battling relentlessly into the cranium.

Their objective . . . to reach a blood clot and destroy it with the piercing rays of a laser.

An excerpt from Fantastic Voyage

It was an old plane, a four-engine plasma jet that had been retired from active service, and it came in along a route that was neither economical nor particularly safe. It nosed through the cloud banks on a trip that took it twelve hours where five might have sufficed with a rocket-powered supersonic.

And there was well over an hour to go.

The agent aboard knew that his part of the job wouldn’t be finished till the plane touched down and that the last hour would be the longest.

He glanced at the only other man in the large passenger cabin—napping for the moment, with his chin buried in his chest.

The passenger didn’t look particularly striking or impressive, but at the moment, he was the most important man in the world.


General Alan Carter looked up glumly when the colonel walked in. Carter’s eyes were pouchy and the corners of his mouth sagged. He tried to bend the paper clip he was manhandling back into shape and it flicked out of his hand.

“Nearly got me that time,” said Colonel Donald Reid, calmly. His sandy hair lay back smoothly but his short, graying mustache bristled. He wore his uniform with the same indefinable unnaturalness that the other did. Both were specialists, drafted for work in a super-specialty, with military rank for convenience and, considering the applications of the field, somewhat out of necessity.

Both had the CMDF insignia. Each letter was in a small hexagon, two above, three below. The middle hexagon of the three bore the symbol that further classified the man. In the case of Reid, it was the caduceus that marked him as a medical man.

“Sure. And counting the hours, too. Like a fool!” His voice rose a controlled notch. “I sit here with my hands wet, my hair sticky, my heart pounding, and I count the hours. Only now it’s the minutes. Seventy-two minutes, Don. Seventy-two minutes and they’re down at the airport.”

“All right. Why be nervous, then? Is there anything wrong?”
“No. Nothing. He was picked up safely. He was taken right out of their hands with, as far as we know, not a hitch. He got safely into the plane, an old one …”

Reid said, “Paranoia, we call it in my profession. I mean, for anyone to believe They’d do that. They’d risk war and annihilation.”

“They might risk just that to stop what’s happening. I’d almost feel We ought to risk it if the situation were reversed. —So We took a commercial plane, a four-engine plasma jet. I was wondering if it could take off, it was so old.”

“Did it what?” For a moment, the general had sunk into blackened thought.

“Yes, yes. It’s coming along fine. I get my reports from Grant.”

“The agent in charge. I know him. With him in charge, I feel as safe as it is possible to feel, which isn’t much. Grant ran the whole thing; flicked Benes out of Their hands like a seed out of a watermelon.”

“But I still worry. I tell you, Reid, there’s only one safe way of handling matters in this darned racket. You’ve got to believe They’re as smart as We are; that for every trick We’ve got, They’ve got a counter-trick; that for every man We’ve got planted on Their side, They’ve got one planted on Ours. This has been going on for over half a century now; We’ve got to be evenly matched, or it would have been all over long ago.”

“How can I? This thing now, this thing Benes is bringing with him, this new knowledge, may end the stalemate once and for all. And with ourselves as winners.”

Reid said, “I hope the Others don’t think so, too. If They do … You know, Al, so far there have been rules to this game. One side doesn’t do anything to back the other side into a corner so tight he has to use his missile buttons. You’ve got to leave him a safe ledge to step back on. Push hard but not too hard. When Benes gets here, They may get the notion They’re being pushed too hard.”

“We have no choice but to risk that.” Then, as the afterthought plagued him, “If he gets here.”

Carter had risen to his feet, as though to begin a hasty walk back and forth to nowhere. He stared at the other, then sat down abruptly. “All right, why get excited? You’ve got that tranquilizer gleam in your eye, doctor. I don’t need any happy pills. But suppose he does get here in seventy-two—sixty-six minutes. Suppose he lands at the airport. He’s still got to be brought here, to be kept here, safely … There’s many a slip …”

“Twixt the cup and the lip,” sing-songed Reid. “Look here, general, shall we be sensible and talk about consequences? I mean—what happens after he gets here?”

“Come on, Don, let’s wait for that till he does get here.”

“Come on, Al,” mimicked the colonel, an edge appearing on his own words. “It won’t do to wait till he gets here. It will be too late when he gets here. You’ll be too busy, then, and all the little ants at Headquarters will start rushing about madly, so that nothing will get done where I think it needs to be done.”

“I promise …” The general’s gesture was a vague one of dismissal.

Reid ignored it. “No. You’re going to be unable to keep any promise you make for the future. Call the chief now, will you? Now! You can get through to him. Right now, you’re the only one who can get through to him. Get him to understand that CMDF isn’t the handmaiden of defense only. Or if you can’t, get in touch with Commissioner Furnald. He’s on Our side. Tell him I want some crumbs for the biosciences. Point out there are votes on this. Look, Al, we’ve got to have a voice loud enough to be heard. We’ve got to have some fighting chance. Once Benes gets here and is jumped by all the real generals, damn them, we’ll be out of commission forever.”

“I can’t, Don. And I won’t. —If you want it straight, I’m not doing a darned thing till I’ve got Benes here. And I don’t take it kindly your trying to put the arm on me at this time.”

Reid’s lips went white. “What am I supposed to do, general?”

“Wait as I am waiting. Count the minutes.”

Reid turned to go. His anger remained under tight control. “I’d reconsider the tranquilizer if I were you, general.”

Carter watched him go without comment. He looked at his watch. “Sixty-one minutes!” he muttered, and groped for a paper clip.

It was almost with relief that Reid stepped into the office of Dr. Michaels, the civilian head of the Medical Division. The expression on Michaels’ broad face might never move higher than a quiet cheerfulness accompanied by, at most, a dry chuckle, but, on the other hand, it never dropped lower than a twinkling solemnity that never took itself, it would seem, too seriously.

He had the inevitable chart in his hand; or one of them. To Colonel Reid, all those charts were alike; each a hopeless maze; and taken together, they were hopelessness many times compounded.

Occasionally, Michaels would try to explain the charts to him, or to almost anyone—Michaels was pathetically eager to explain it all.

The bloodstream, it seemed, was tagged with a trace of mild radioactivity and the organism (it could be a man or a mouse) then took its own photograph, so to speak, on a laserized principle that produced a three-dimensional image.

—Well, never mind that, Michaels would say at that point. You get a picture of the entire circulatory system in three dimensions which can then be recorded two-dimensionally in as large a number of sections and projections as would be required for the job. You could get down to the smallest capillaries, if the picture were properly enlarged.

“And that leaves me just a geographer,” Michaels would add. “A geographer of the human body, plotting its rivers and bays, its inlets and streams; much more complicated than anything on Earth, I assure you.”

Reid looked at the chart over Michaels’ shoulder and said, “Whose is that, Max?”

“No one’s to speak of.” Michaels tossed it aside. “I’m waiting, that’s all. When someone else waits, he reads a book. I read a blood system.”

“You’re waiting, too, eh? So’s he.” Reid’s head nodded backward in the general direction of Carter’s office. “Waiting for the same thing?”

“For Benes to get here. Of course. And yet, you know, I don’t entirely believe it.”

“I’m not sure the man has what he says he has. I’m a physiologist, to be sure, and not a physicist,” Michaels shrugged in self-deprecatory humor, “but I like to believe the experts. They say there’s no way. I hear them say that the Uncertainty Principle makes it impossible to do it for longer than a given time. And you can’t argue with the Uncertainty Principle, can you?” 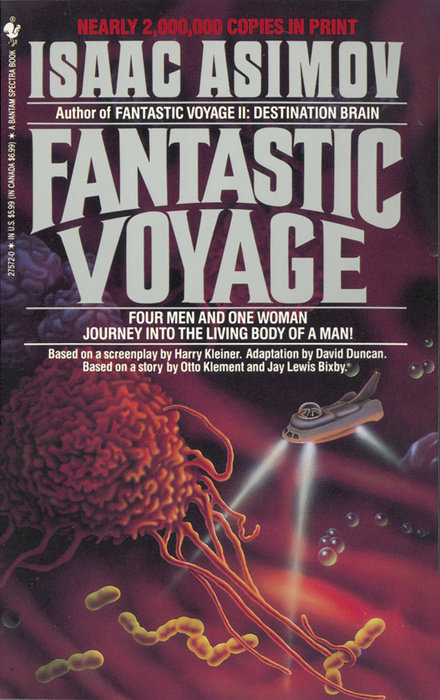