What Racism Costs Everyone and How We Can Prosper Together

NEW YORK TIMES BESTSELLER • LONGLISTED FOR THE NATIONAL BOOK AWARD • One of today’s most insightful and influential thinkers offers a powerful exploration of inequality and the lesson that generations of Americans have failed to learn: Racism has a cost for everyone—not just for people of color.

WINNER OF THE PORCHLIGHT BUSINESS BOOK AWARD • ONE OF THE BEST BOOKS OF THE YEAR: Time, The Washington Post, St. Louis Post-Dispatch, Ms. magazine, BookRiot, Library Journal • LONGLISTED FOR THE ANDREW CARNEGIE MEDAL • “This is the book I’ve been waiting for.”—Ibram X. Kendi, #1 New York Times bestselling author of How to Be an Antiracist

Heather McGhee’s specialty is the American economy—and the mystery of why it so often fails the American public. From the financial crisis of 2008 to rising student debt to collapsing public infrastructure, she found a root problem: racism in our politics and policymaking. But not just in the most obvious indignities for people of color. Racism has costs for white people, too. It is the common denominator of our most vexing public problems, the core dysfunction of our democracy and constitutive of the spiritual and moral crises that grip us all. But how did this happen? And is there a way out?

McGhee embarks on a deeply personal journey across the country from Maine to Mississippi to California, tallying what we lose when we buy into the zero-sum paradigm—the idea that progress for some of us must come at the expense of others. Along the way, she meets white people who confide in her about losing their homes, their dreams, and their shot at better jobs to the toxic mix of American racism and greed. This is the story of how public goods in this country—from parks and pools to functioning schools—have become private luxuries; of how unions collapsed, wages stagnated, and inequality increased; and of how this country, unique among the world’s advanced economies, has thwarted universal healthcare.

But in unlikely places of worship and work, McGhee finds proof of what she calls the Solidarity Dividend: the benefits we gain when people come together across race to accomplish what we simply can’t do on our own. The Sum of Us is not only a brilliant analysis of how we arrived here but also a heartfelt message, delivered with startling empathy, from a black woman to a multiracial America. It leaves us with a new vision for a future in which we finally realize that life can be more than a zero-sum game.

An excerpt from The Sum of Us

Perhaps there’s been a time when you’ve pondered exactly this question. And by nice things, you weren’t thinking about hovercraft or laundry that does itself. You were thinking about more basic as-pects of a high-functioning society, like adequately funded schools or reliable infrastructure, wages that keep workers out of poverty or a public health system to handle pandemics. The “we” who can’t seem to have nice things is Americans, all Americans. This includes the white Americans who are the largest group of the uninsured and the impoverished as well as the Americans of color who are dispropor-tionately so. “We” is all of us who have watched generations of Amer-ican leadership struggle to solve big problems and reliably improve the quality of life for most people. We know what we need—why can’t we have it?“

Why can’t we have nice things?” was a question that struck me pretty early on in life—growing up as I did in an era of rising in-equality, seeing the wealthy neighborhoods boom while the schools and parks where most of us lived fell into disrepair. When I was twenty-two years old, I applied for an entry-level job at Demos, aresearch and advocacy organization working on public policy solutions to inequality. There, I learned the tools of the policy advocacy trade: statistical research and white papers, congressional testimony, litigation, bill drafting, media outreach, and public campaigns.

It was exhilarating. I couldn’t believe that I could use a spread-sheet to convince journalists to write about the ideas and lives of the people I cared most about: the ones living from paycheck to paycheck who needed a better deal from businesses and our government. And it actually worked: our research influenced members of Congress to introduce laws that helped real people and led to businesses changing their practices. I went off to get a law degree and came right back to Demos to continue the work. I fell in love with the idea that information, in the right hands, was power. I geeked out on the intricacies of the credit markets and a gracefully designed regulatory regime. My specialty was economic policy, and as indicators of economic inequality became starker year after year, I was convinced that I was fighting the good fight, for my people and everyone who struggled.

And that is how I saw it: part of my sense of urgency about the work was that my people, Black people, are disproportionately ill served by bad economic policy decisions. I was going to help make better ones. I came to view the relationship between race and inequality as most people in my field do—linearly: structural racism accelerates inequality for communities of color. When our govern-ment made bad economic decisions for everyone, the results were even worse for people already saddled with discrimination and disadvantage.

Take the rise of household debt in working-and middle-class families, the first issue I worked on at Demos. The volume of credit card debt Americans owed had tripled over the course of the 1990s, and among cardholders, Black and Latinx families were more likely to be in debt. In the early 2000s, when I began working on the issue, bankruptcies and foreclosures were rising and homeowners, particularly Black and brown homeowners, were starting to take equity out of their houses through strange new mortgage loans—but the problem of burdensome debt and abusive lending wasn’t registering on the radar of enough decision makers. Few politicians in Washington knew what it was like to have bill collectors incessantly ringing their phones about balances that kept growing every month. So, in 2003, Demos launched a project to get their attention: the first-ever comprehensive research report on the topic, with big, shocking numbers about the increase in debt. The report included policy recommenda-tions about how to free families from debt and avoid a financial melt-down. Our data resulted in newspaper editorials, meetings with banks, congressional hearings, and legislation to limit credit card rates and fees.

Two years later, Congress took action—and made the problem of rising debt worse. Legislators passed a bankruptcy reform bill sup-ported by the credit industry that made it harder for people ever to escape their debts, no matter how tapped out they were after a job loss, catastrophic medical illness, or divorce. The law wasn’t good for consumers, did nothing to address the real problems in family finances, and actually made the problem worse. It was a bad economic policy decision that benefited only lenders and debt collectors, not the public. This was a classic example of the government not doing the simple thing that aligned with what most Americans wanted or what the data showed was necessary to solve a big problem. Instead, it did the opposite. Why?

Well, for one thing, our inability to stop bankruptcy reform made me realize the limits of research. The financial industry and other corporations had spent millions on lobbying and campaign donations to gin up a majority in Congress, and many of my fellow advocates walked away convinced that big money in politics was the reason we couldn’t have nice things. And I couldn’t disagree—of course money had influenced the outcome.

But I’ll never forget something that happened on the last day I spent at the Capitol presenting Demos’s debt research to members of Congress. I was walking down the marble hallway of the Russell Senate Office Building in my new “professional” shoes—I was twenty-five years old—when I stopped to adjust them because they kept slipping off. When I bent down, I was near the door of a Senate office; I honestly can’t remember if it belonged to a Republican or a Democrat. I heard the bombastic voice of a man going on about the deadbeats who had babies with multiple women and then declared bankruptcy to dodge the child support, using the government to avoid personal responsibility. There was something in the senator’s invective that made my heart rate speed up. I stood and kept moving, my mind racing. Had we advocates entirely missed something about the fight we were in? We had been thinking of it as a class issue (with racial disparities, of course), but was it possible that, at least for some of the folks on the other side of the issue, coded racial stereotypes were a more central player in the drama than we knew?

I left Capitol Hill, watching the rush hour crush of mostly white people in suits and sneakers heading home after a day’s work in the halls of power, and felt stupid. Of course, it’s not as if the credit card companies had made racial stereotypes an explicit part of their communications strategy on bankruptcy reform. But I’d had my political coming-of-age in the mid-1990s, when the drama of the day was “ending welfare as we know it,” words that helped Bill Clinton hold on to the (white) political center by scapegoating (Black) single mothers for not taking “personal responsibility” to escape poverty. There was nothing explicit or conclusive about what I’d overheard, but perhaps the bankruptcy reform fight—also, like welfare, about the de-servingness and character of people with little money—was playing out in that same racialized theater, for at least one decision maker and likely more.

I felt frustrated with myself for being caught flat-footed (literally, shoe in hand!) and missing a potential strategic vulnerability of the campaign. I’d learned about research and advocacy and lobbying in the predominantly white world of nonprofit think tanks, but how could I have forgotten the first lessons I’d ever learned as a Black person in America, about what they see when they see us? About how quick so many white people could be to assume the worst of us . . . to believe that we wanted to cheat at a game they were winning fair and square? I hadn’t even thought to ask the question about this seemingly nonracial financial issue, but had racism helped defeat us?

Heather McGhee is an expert in economic and social policy. The former president of the inequality-focused think tank Demos, McGhee has drafted legislation, testified before Congress, and contributed regularly to news shows, including NBC’s Meet the Press. She now chairs the board of Color of Change, the nation’s largest online racial justice organization. McGhee holds a BA in American studies from Yale University and a JD from the University of California, Berkeley, School of Law.

What Racism Costs Everyone and How We Can Prosper Together 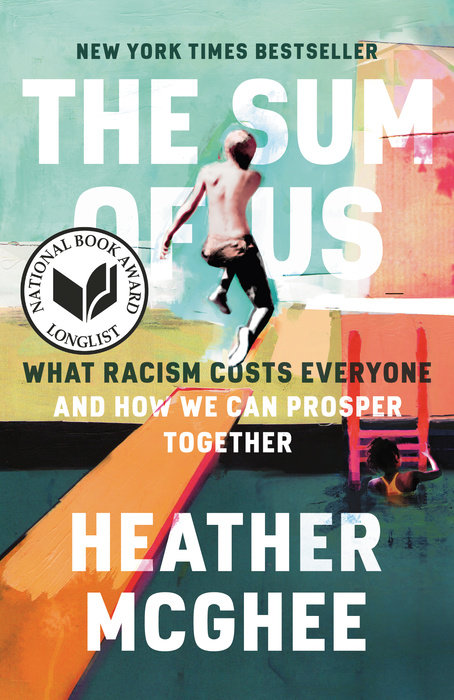