Find the Magic in Yourself: A Beginner Witch's Guide

This illustrated guide to altars, candles, tarot, and spell-building will teach you to protect your energy, honor your intuition, raise your vibration—and tap into your inner-witch.

“Enchantments will blow your mind and make you laugh while imparting expert knowledge of witchcraft and why it’s so needed today.”—NATASHA LYONNE

Mya Spalter spent years among candles, herbs, cats, witchy gifts, and spells as an employee at New York City’s oldest occult shop, Enchantments. In this beautifully illustrated book, Spalter sets out to share ways that she’s found to live life magically and maintain spiritual connection with the elements and the universe.

Spalter, a practicing witch herself, explores Wiccan history and offers an approachable compendium of witchcraft and magical knowledge that will equip you to construct your own original spells, build rituals around your intuition, harness the power of crystals, and create spell candles that can be used by witches everywhere. With Enchantments, Spalter creates a supportive and nonjudgmental space for you to become your own unique kind of witch.

Black and queer, Spalter has written this friendly, inclusive guide to witchcraft that will teach anyone how to:

• Build an altar: Find the right tools to model the grace and beauty you aspire to find in your life.
• Cast a self-love spell on yourself: Recognize your own strength and power to inspire happiness and fulfillment.
• Clear out negative energies: Identify and rid yourself of the things holding you back.
• Set meaningful intentions: Create daily practices that positively affect yourself and the world—and witches—around you.

You will learn why certain colors can help raise your vibrations, how to mix herbs for witchcraft, the keys to banishing unfriendly spirits (with cleansing rituals or even a dance party), and invaluable instructions in the timeless arts of astrology, tarot, crystals, and finding a parking spot downtown.

Open this book and enchant your own life!

An excerpt from Enchantments

1. Altars: Create a Sacred Space
2. Colors: Hues to Help You Achieve Your Goals
3. Candles: Craft a vessel for your intention
4. Plants and Minerals: Harness your energy with herbs and crystals
5. Planets: Tap into the power of the solar system
6. Calendar: Find ways to Embrace the Changing Seasons
7. Covens and Collaborators: Work Magically with Others

8. Uncrossing, Protection, and Banishing: How to clear negativity from yourself and your space
9. Attraction Magic: How to Draw Love, Warmth and Abundance
10. Money Drawing: How to Invite and Encourage Prosperity
11. Divination: How to Access Inner Knowledge
12. Astrology: How Movements of the Planets Mirror and Influence Us

Where the Magic Happens, or Altars

Now that we’re well acquainted, I’ll show you my altars. The altar is an area of your home that’s devoted to your spiritual life. It can serves as a workspace for building your spells, or as a tiny temple for honoring a deity, saint, intention, or concept. The important part is that your altar is a dedicated space. Most people who practice witchcraft or another polytheistic worship have at least one altar in their home. But no pressure. Even people who aren’t spiritually inclined seem to be able to get down with the beneficial function of an altar as a place to model peace and balance in our lives. It’s aspirational.

If you don’t already have a designated altar, find an uncluttered area where you can place items of spiritual significance to you: photos of departed loved ones, plants, postcards, paintings, crystals, mirrors, beads and jewelry, flowers, shells, stones, miscellaneous items of sentimental value. Go nuts. I wish I could come over and help you with this part. It’s my favorite. I actually have a dream of starting a business called Spalter’s Altars, where I go into people’s homes and help them assemble altars out of items they already have or that we could go find at a yard sale or the dollar store. One of the principles of magic that I appreciate the most is the notion that you have what you need all around you. It’s just up to you to be sharp enough to see it.

The items you collected for your altar are now to be considered ritual items. Ritual items are set apart from your other possessions, and you take special care with them. By “ritual,” I mean an elevated habit—that is, a habit that has some symbolic meaning. Humans love ritual; we’ll make a ritual out of anything. We’ve all wished on an eyelash, blown out birthday candles after chanting a little song, knocked on wood, or blessed someone who sneezed. We can’t get enough of ritual, because it resonates with something deep in our human condition. Performing a prescribed action with the knowledge that you’re part of a tradition is really powerful. It’s an opportunity to inhabit a less mundane frame of mind. But we don’t always realize our own agency to create and curate new and personal rituals, to respectfully draw from different practices to cobble together our own unique way to feel connected. Your altar can be a physical representation of what that process looks like for you.

I take immeasurable pleasure in making and maintaining my altars. Beyond my primary altar, every windowsill and plant pot in my house contains some semi-intentional collection of magical crap, so I’m always ready to create an altar to suit my mood or intention. I use whatever I have to hand at any moment: a feather, two marbles, a die turned meticulously to a particular side, broken statuary arranged to appear somewhat less broken, small plastic animals, sea glass and precious stones, widowed earrings, minuscule pinwheels, loose change, mica flakes and dried-up cherry blossoms, golden bobby pins and tiny crystal cordial glasses. I haven’t yet applied the life-changing magic of tidying up, or whatever you call it, but I’m worried it wouldn’t work on me because I truly love and viscerally enjoy every magpie sequin and pottery shard.

My one word of caution as you set up your altar is fire safety! You have to be so careful with candles and incense. If it’s not safe to burn things on your altar, do it in a sink, or in a tub, or on the stovetop. Don’t burn the house down, dummy.

Often for me, practicing solo as I do, the process of creating the altar is the ritual. Sometimes building the tiny, beautiful, sympathetic world of my altar, populated with all of the tiny talismans that bolster my intention, suffused with the sights and smells associated with the feeling I mean to provoke, can be a whole spell in itself.

With that in mind, let’s explore the altar setups suggested by some Wiccan liturgy, as it’s meant to cover all the bases, and then I’ll show and tell how I choose to vary from that, to give you some ideas on how to create your own altars.

Do what you feel.

I refer to Wiccan and Neo-Pagan traditions a lot in this book. Mostly because that’s what I’m most familiar with from working at Enchantments, and through that work I’ve found that the traditions compiled under the name Wicca or modern Paganism host a lot of useful language for discussing matters of universal spiritual significance: the need to create sacred space, make real our connection to the Earth, wonder about our place in the universe, and connect with divinity. Wicca is a special blend of European folk cultures and some transliterations of Mesopotamian, Sumerian, Babylonian, and Egyptian deities and beliefs, but a lot of Pagans will honor any form of divinity that will sit still long enough. I intend no pun in saying that I’m enchanted by the texture and detail of these composite spiritual practices. I feel at home in traditions that are explicitly, consciously evolving human creations. They’re roomy enough for my broad concept of the divine. I also find that modified versions of some Wiccan practices can be applied to lend a little structure to any self-guided practice you want to create. In straight-up Wiccan traditions, as opposed to the Wicca-ria-pop-magic-Jewish-Hoodoo that I do, the ritual items of the altar are more prescribed than my tchotchkes and family photos. That’s not to say that they’re dogmatic about it; it’s just that some of the Wiccan ritual items are the props necessary to act out the processes that their liturgy calls for. Still, it’s worth noting that rule number one in A Witches’ Bible (which is a real book that you can read if Wicca interests you) is: Do what feels right to you. In the end, your altar or ritual might not bear much resemblance to the original, but that’s just the point.

The way I look at it, an altar is like a temple in miniature, a diorama if you will, that contains small representations of the different types and directions of energy, roughly categorized as elements: earth, air, fire, water, and a fifth, ineffable thing, spirit, the animating force, often represented by the image of some deity.

In Wicca, the water element is represented by the ritual cup, or chalice, which is just the Christian word for cup. Earth is represented by a pentacle, or five-pointed star, constructed of a natural substance, like wood or metal. Air is often represented by an athame, a ceremonial witch knife, usually dark-handled (as opposed to the boline, a traditional white-handled witch knife used for everyday things like cutting herbs or carving), or by a sword (if you have that kind of space and you like LARPing). The fire element is represented by a wand. Wands are usually about a foot long, give or take, composed of wood, metal, precious stones, or some combination thereof.

Why these items, you might ask? They correspond to the suits of the Minor Arcana in the tarot (see Chapter 11), and their symbolic role on the altar is informed by a similar logic. The cup (water) is a mystical shorthand for the emotions, while the pentacle (earth) references foundational matters of physical practicality, labor, and money. Air, represented by the blade, is meant to indicate the uncanny quality of thought and language as tangible forces in the world, cutting through space. Which, incidentally, is what people actually do with their blades in ritual: point them as if to cut through the air, thereby directing energy. Wands (fire) are used similarly for directing energy, and in Wiccan liturgy they are meant to symbolize one’s deeds and actions. But there’s a lot of room for interpretation, and some folks prefer to reverse the two and use wands to represent air and thought and swords to represent fire and action. Arguing the point is a more academic exercise than I am interested in here, and since I don’t personally use either of these symbols to represent the elements on my altar, the fine distinctions don’t trip me up too much. You shouldn’t let them trip you up, either. It’s all about what resonates best with your style.

Find the Magic in Yourself: A Beginner Witch's Guide 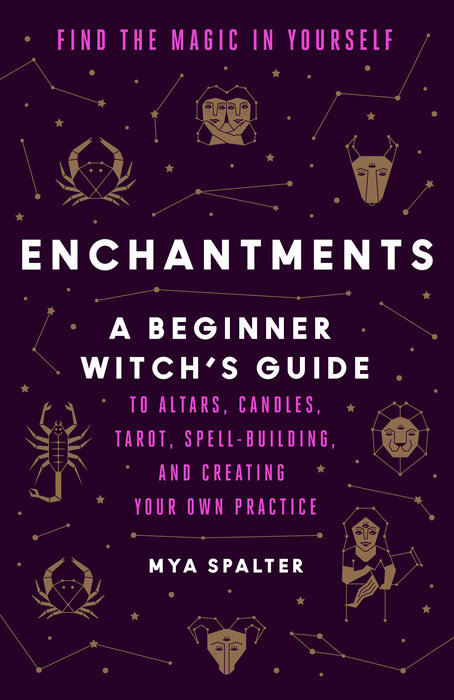