Letters on Loss, Grief, and Transformation

From the writer of the classic Letters to a Young Poet, reflections on grief and loss, collected and published here in one volume for the first time.

“A great poet’s reflections on our greatest mystery.”—Billy Collins

“A treasure . . . The solace Rilke offers is uncommon, uplifting and necessary.”—The Guardian

Gleaned from Rainer Maria Rilke’s voluminous, never-before-translated letters to bereaved friends and acquaintances, The Dark Interval is a profound vision of the mourning process and a meditation on death’s place in our lives. Following the format of Letters to a Young Poet, this book arranges Rilke’s letters into an uninterrupted sequence, showcasing the full range of the great author’s thoughts on death and dying, as well as his sensitive and moving expressions of consolation and condolence.

Presented with care and authority by master translator Ulrich Baer, The Dark Interval is a literary treasure, an indispensable resource for anyone searching for solace, comfort, and meaning in a time of grief.

Praise for The Dark Interval

“Even though each of these letters of condolence is personalized with intimate detail, together they hammer home Rilke’s remarkable truth about the death of another: that the pain of it can force us into a ‘deeper . . . level of life’ and render us more ‘vibrant.’ Here we have a great poet’s reflections on our greatest mystery.”—Billy Collins

“As we live our lives, it is possible to feel not sadness or melancholy but a rush of power as the life of others passes into us. This rhapsodic volume teaches us that death is not a negation but a deepening experience in the onslaught of existence. What a wise and victorious book!”—Henri Cole

An excerpt from The Dark Interval

Mimi Romanelli (1877–­1970), the younger sister of the Italian art dealer and archaeologist Pietro Romanelli, was known for her beauty and musical talent. Rilke stayed in her family’s small hotel in Venice in 1907. They had a romantic relationship and maintained a long correspondence.

There is death in life, and it astonishes me that we pretend to ignore this: death, whose unforgiving presence we experience with each change we survive because we must learn to die slowly. We must learn to die: That is all of life. To prepare gradually the masterpiece of a proud and supreme death, of a death where chance plays no part, of a well-­made, beatific, and enthusiastic death of the kind the saints knew to shape. Of a long-­ripened death that effaces its hateful name and is nothing but a gesture that returns those laws to the anonymous universe which have been recognized and rescued over the course of an intensely accomplished life. It is this idea of death which has developed inside of me since childhood from one painful experience to the next, and which compels me to humbly endure the small death, so that I may become worthy of the one which wants us to be great.

I am not ashamed, my dear, to have cried on a recent early Sunday morning in a cold gondola as it was gliding around endless corners through parts of Venice so vaguely visible that they seemed to extend into another city far away. The voice of the barcaiolo who called out to be granted passage at the corner of a canal received no answer, as in the face of death.

And the bells that I had heard in my room only moments before (my room where I have lived a whole life, where I was born and where I am preparing to die) seemed so clear to me; those same bells trailed their sounds like rags behind them over the swirling waters, only to reconnect without recognition.

It is still this death which continues inside of me, which works in me, which transforms my heart, which deepens the red of my blood, which bears down heavily on the life that had been ours so that this death becomes a bittersweet drop coursing through my veins and permeating everything, and which ought to be mine forever.

And while I am completely engulfed in my sadness, I am happy to sense that you exist, beautiful one. I am happy to have flung myself without fear into your beauty just as a bird flings itself into space. I am happy, dear, to have walked with steady faith on the waters of our uncertainty all the way to that island which is your heart and where pain blossoms. Finally: happy.

Lili Kanitz-­Menar (1869–­1943) was the great-­niece of Rilke’s acquaintance Countess Luise Schwerin (1846–­1906) in whose memory he wrote the poem “Experience of Death” (1907). She performed as a concert singer and conductor under the name Lili Menar.

I thank you, my dear friend, for having written to me. Fifty times I’ve wanted to respond since receiving your letter, but couldn’t get to it. There is so much that I need to get through right now: I mean in my work, and I don’t have quite as much energy as I ought to. And then, to add to all of this, this incommensurate event. What is one supposed to say? How should one account for it? It is always the same question. Over the past few years, I have had to ask myself this question several times. The death of Countess Schwerin and my father’s death (each of which provided me with an experience of infinite greatness and magnanimity) have resulted in the fact that I no longer fear this question. And yet it is difficult to have to face it again so closely, even in the brightest day. And in this most recent case, it is complicated by so many things: Who was this woman who lived for other people and yet, beneath everything and without knowing or admitting to it, harbored the demands of an entire life within her as if they had been left there entirely touched, so that one could often get the idea that she was also the opposite of what she wanted to be, and that both of these states would be equally true and equally unreal? And finally, what sort of relationship did one have with her, in which fondness and even admiration was so oddly compatible with resistance, rejection, and harsh judgments that one never dared to fully take stock of it and arrive at a net total? And for quite some time I experienced the kindness she displayed toward me and which eventually turned into a friendship—­I don’t know when—­rather as a beautifully executed legacy from the wonderful sister who preceded her, than as an actual gift from her. In trying to make sense of this, I only move further away from any insight into this person. Today, my attitude toward death is that it frightens me more in those whom I failed to truly encounter and who remained inexplicable or disastrous to me, than it does in those whom I loved with certainty when they were alive, even if they burst only for a brief moment into the radiant transfiguration of intimacy which love can reach. If people took some simple pleasure in reality (which is entirely independent of time), they would never have needed to come up with the idea that they could ever again lose anything with which they had truly bonded. No constellation is as steadfast, no accomplishment as irrevocable as a connection between human beings which, at the very moment it becomes visible, works more forcefully in those invisible depths where our existence is as lasting as gold lodged in stone, more constant than a star.

This is why I agree with you, my dear friend, when you say that you mourn those “who go away.” Alas, only those can go away from us whom we never possessed. And we cannot even grieve the fact of never really having possessed this one or that one: We would have neither time nor strength nor justification for doing so. For already the most fleeting experience of true possession (or of having something in common with another person, which is after all only double possession) flings us back into ourselves with such enormous force and requires so much of us to do there, and demands such extremely solitary development, that it would be enough to keep all of us occupied individually forever.

Is that not the case?

The letter before your last one conveyed such good news that I now wish a thousand times that your current travels and your inner resolve will very soon lead to more such news, and that you will not be remiss in sending them to me. Clara is busy at work and produces beautiful things. I will see her at the end of the week.

Rainer Maria Rilke (1875–1926) was one of the greatest lyric German-language poets. Born in Prague, he published his first book of poems, Leben und Lieber, at age 19. In 1897 he met Lou Andreas-Salomé, the talented and spirited daughter of a Russian army officer, who influenced him deeply. In 1902 he became a friend, and for a time the secretary, of Rodin, and it was during his 12-year Paris residence that Rilke enjoyed his greatest poetic activity. In 1919 he went to Switzerland where he spent the last years of his life. It was there that he wrote his last two works, Duino Elegies (1923) and Sonnets to Orpheus (1923).

Letters on Loss, Grief, and Transformation 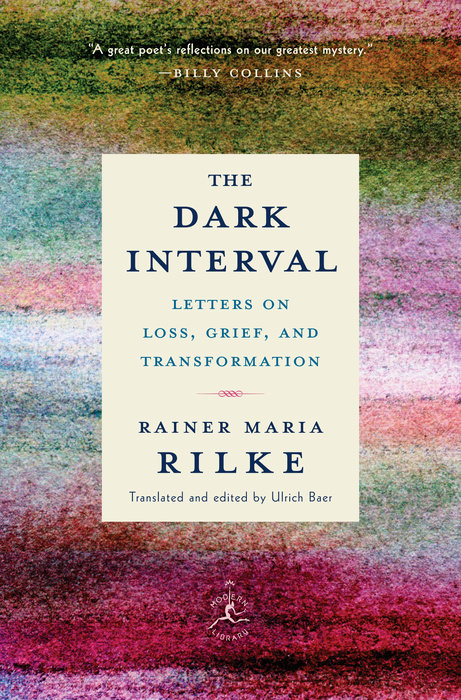