An immigrant’s mysterious death sets off a chilling hunt for the truth in this gripping crime novel from the author of Missing, Presumed

“A police procedural with real imagination and heart, and a marvelous lightness of style and wit.”—Philip Pullman, author of His Dark Materials trilogy

Newly married and navigating life with a preschooler as well as her adopted adolescent son, Manon Bradshaw is happy to be working part-time in the cold cases department of the Cambridgeshire police force, a job that allows her to potter in, coffee in hand, and log on for a spot of Internet shopping—precisely what she had in mind when she thought of work-life balance. But beneath the surface Manon is struggling with the day-to-day realities of what she’d assumed would be domestic bliss: fights about whose turn it is to clean the kitchen, the bewildering fatigue of having a young child while in her forties, and the fact that she is going to couples counseling alone because her husband feels it would just be her complaining.

But when Manon is on a walk with her four-year-old son in a peaceful suburban neighborhood and discovers the body of a Lithuanian immigrant hanging from a tree with a mysterious note attached, she knows her life is about to change. Suddenly, she is back on the job full-force, trying to solve the suicide—or is it a murder—in what may be the most dangerous and demanding case of her life.

An excerpt from Remain Silent

His key in the door, he shoulders across the threshold, stumbles wildly up the stairs to the bathroom. He can’t risk being beaten for soiling the carpet. His stomach is coiling and despite it being empty, he vomits into the toilet: acid bile. In a strange way, the retching comforts him.

Dimitri is at the bathroom’s open doorway.

Dimitri approaches. “Too much to drink?” he asks.

When Matis turns to look up at him, Dimitri says, “My God, what happened to you?”

“Lukas is dead,” Matis sobs. “I brought him here and now he’s dead. I never saw such hatred, Dimitri. Why do they hate us so much?”

“I hope he haunts them out of their beds at night,” says Matis.

“To be haunted, you must have a conscience,” says Dimitri.

“And they have none.”

Dimitri lifts him to his feet. “Come, you need a drink.”

In the kitchen, while Dimitri locates vodka, Matis starts shaking.

Dimitri says, “The police here, they will look into it properly. Not like back home.” He hands Matis the bottle. Matis swigs. Winces. It burns his sore stomach.

“It won’t bring him back. This is my fault.”

In the bedroom, which contains four men sleeping on mattresses on the floor, Dimitri takes the empty place beside Matis, to comfort him. The mattress where Lukas used to whimper in the dark, until one of the men shouted, “Užsičiaupk po velnių”—shut the f*** up.

“Do you need something to sleep?” Dimitri asks. “That guy, the dealer who helped Saulius, he gave us pills.”

Matis shakes his head, rolls onto his back.

If life were a force of will, Matis could wish himself dead. No such luck. His body, tired and broken, keeps going. He keeps on waking on the stinking mattress, soaked in the sweat of other men who had been in the same situation before him. And what happened to them?

When they are in the van at 4 a.m., it is a moment of reprieve—a moment to exhale. They have survived an ordeal, have dragged themselves from too little sleep, got to the BP garage, where migrants from across town are picked up for agricultural work, in time. They cannot be punished for missing the call, for being late. The next ordeal—catching enough chickens through the fog of their exhaustion, through the sting of the scratches on their hands reopening—would come later. Almost all the men fell straight to sleep in the van. Chin to chest. Forehead to window.

He’s always sleeping with this ragtag of psychos, the weird intimacy of sharing a room. The snoring, someone talking in his sleep, the smells emitted by bodies at night, thick and human and perhaps repulsive, but also deeply, vulnerably personal. Lukas may have whimpered on his mattress at night, but Matis didn’t. This had been his idea, and he had had to make it work, had had to make it look like it was working. Up to now, he’d had to survive, even though he didn’t want to, to tell both himself and Lukas that their bind was temporary, a bump on the path to freedom. But with Lukas gone . . .

“Wake me up now, Mummy!” Teddy yells from the next room.

Manon gives Mark a shove and he rolls obediently out of bed.

She squints at her watch. 6:20 a.m. “F***’s sake,” she says, then turns over and descends back to delicious depths. The warmth of the duvet, the darkness of the room thanks to the blackout curtain lining, the numbness of her mind, broken by harsh winds of irritation: the feel of Mark and Teddy getting into the bed.

She would make all manner of pacts with Lucifer to be allowed fresh descent. Give me five minutes, three minutes, one minute. I will give you my soul.

There will be a moment of lovely cuddling, the velvety plush of Ted’s cheek pads, his squidge-able limbs—forearms, upper arms, padded with gentle fat, still of a toddler. She cherishes this remnant of babyhood. She’s become a baby botherer in cafés, overenunciating “Hallo!” into their cloudy eyes, while their mothers look on her with suspicion.

Ted pushes his fingers up her nose and says, “Hello, Defective Mummy!” because he doesn’t know the word is “detective.” Or perhaps he does.

She can feel the crescendo of fidgetry begin: knees in the groin, kissing that becomes biting, until one of them submits to predawn Weetabix.

Standing over her boy, she holds his tiny penis away from his body so the yellow arc of piss, warm and high, hits the hedge. She’s wondering whether to ring Mark to tell him to nudge Fly, make sure he isn’t oversleeping. He’s in an important moment at school (GCSEs) and she permanently feels he’s too lackadaisical, but then she argues with herself about allowing him to grow up and make his own mistakes. So much of her internal monologue these days revolves around where she is going wrong as a parent. To micromanage or to let go, that is the question.

The swings and slide were wet. Teddy went on them anyway. She was too comatose to object (should she start taking iron, for the tiredness?) despite knowing he would swing from happy and absorbed to freezing wet and miserable in a nanosecond.

She looks up. The sky is an ominous thumb smudge, the light low and the air damp. Classic British spring. The chestnut tree twenty yards away billows in the wind, its candelabra flowers bobbing wildly.

The air smells wet, fresh, with a trace of dog turd on its skirts.

She sniffs again, sensing something.

The wind is making things creak and knock.

She can hear a sound that is wrong. Wrong place, wrong context. She scans about, while Teddy concentrates on weeing.

In the billowing tree that is twenty yards away.

She sees two black boots, high among the tree branches. She straightens, squinting to see better. Ankles, trousers. Swaying at head height. The creaking sound might be rope against branch.

She tucks Teddy back into his trousers, swivels him by the shoulders, and lifts him. He is too big to be carried; they’re always arguing about it, him standing in front of her—his block move—with arms in the air and her saying, “No, you can walk.” So he’s bewildered at being lifted, but is certainly not about to argue. He is a deadweight; damp trousers, his legs banging against her body. But she is in flight, not fight, holding his head down against her shoulder so he won’t spot the legs, though it’s unlikely he would notice.

Her boy is a strange combination of beady-eyed and myopic. If she has her head in one of the kitchen cupboards, eating an illicit biscuit, he can fix her with a steely gaze.

“Nothing,” she’ll say, over the rubble of a full mouth.

Yet she has a feeling if she were bleeding to death in the street, he’d stand over her, saying, “Need a drink. I’m urgent.”

She is running away from the tree, carrying Ted with one arm and digging into her pocket with the other for her phone to call it in.

First time she’s ever run away from a body.

“Control, this is Officer Bradshaw, 564. We have a deceased in Hinchingbrooke Country Park close to the car park. Repeat cadaver unattended in country park. Urgent attendance needed, send units. Cadaver is unattended in a public place. In a tree. Hanging from a tree.”

“Can you attend please, Detective Inspector?” says the control room.

“No, I am with a ch—a minor.” Manon is trying to use language Teddy cannot understand. Deceased. Cadaver. Not dead. Not body. “I cannot attend. You need to send units.”

Despite her tone and use of jargon, Ted has sensed the rise in her vital signs, is prickling all over with transferred tension, and he lets out a wail—a combination of confusion and alarm. “All right, Ted,” she says. “It’s all right. Mummy’s all right and you’re all right. Just a work call, that’s all. Shall we go home and watch Fireman Sam?”

Susie Steiner is a former journalist at The Guardian, where she worked as a commissioning editor for eleven years. Prior to that, she worked for The Times, the Daily Telegraph, and the Evening Standard. She lives in London with her husband and two sons. 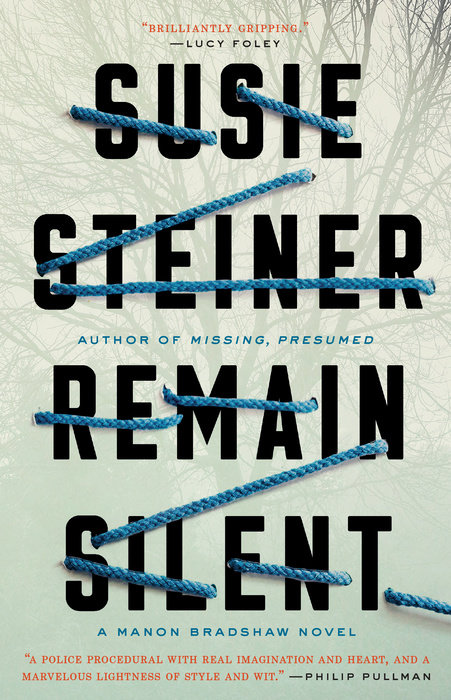