The legendary life and entrepreneurial vision of Fred Harvey helped shape American culture and history for three generations—from the 1880s all the way through World War II—and still influence our lives today in surprising and fascinating ways. Now award-winning journalist Stephen Fried re-creates the life of this unlikely American hero, the founding father of the nation’s service industry, whose remarkable family business civilized the West and introduced America to Americans.

Appetite for America is the incredible real-life story of Fred Harvey—told in depth for the first time ever—as well as the story of this country’s expansion into the Wild West of Bat Masterson and Billy the Kid, of the great days of the railroad, of a time when a deal could still be made with a handshake and the United States was still uniting. As a young immigrant, Fred Harvey worked his way up from dishwasher to household name: He was Ray Kroc before McDonald’s, J. Willard Marriott before Marriott Hotels, Howard Schultz before Starbucks. His eating houses and hotels along the Atchison, Topeka, and Santa Fe railroad (including historic lodges still in use at the Grand Canyon) were patronized by princes, presidents, and countless ordinary travelers looking for the best cup of coffee in the country. Harvey’s staff of carefully screened single young women—the celebrated Harvey Girls—were the country’s first female workforce and became genuine Americana, even inspiring an MGM musical starring Judy Garland.

With the verve and passion of Fred Harvey himself, Stephen Fried tells the story of how this visionary built his business from a single lunch counter into a family empire whose marketing and innovations we still encounter in myriad ways. Inspiring, instructive, and hugely entertaining, Appetite for America is historical biography that is as richly rewarding as a slice of fresh apple pie—and every bit as satisfying.

*With two photo inserts featuring over 75 images, and an appendix with over fifty Fred Harvey recipes, most of them never-before-published.

An excerpt from Appetite for America

WHO THE HELL IS FRED HARVEY?


On that spring night in 1882, the drunken cowboys riding through northern New Mexico could have been forgiven for squinting in disbelief at the sight of the Montezuma Hotel. It did appear to be a hallucination.

The Montezuma was one of the most astonishing architectural creations in America— although perhaps most astonishing was its location. It was nestled in a gorgeous middle of nowhere, in the foothills of the Sangre de Cristo Mountains six miles outside of Las Vegas, New Mexico, an old Santa Fe Trail town that the railroad had only recently connected to civilization. The largest wood-frame building in the United States— some ninety thousand square feet, with 270 guest rooms— the Queen Anne–style Montezuma featured a dining room that seated five hundred, a casino, a breathtaking wine cellar, eleven bowling alleys, a billiard hall, and an immense therapeutic bathing facility offering six different kinds of baths and douches, so patrons could fully experience the medicinal powers of the underground hot springs.

The service at the Montezuma was brilliant, with staff imported from the best hotels in New York, London, Chicago, and St. Louis. And the cuisine was amazingly ambitious. The food combined the expertise of classically trained chefs from the restaurant capitals of the world with fresh regional American ingredients— fruit, vegetables, and shellfish, as well as delicacies like green turtles and sea celery harvested by pearl- diving Yaqui tribesmen— to which few other kitchens in the country had access, and which most chefs wouldn’t come to fully appreciate for almost another century. Open for only a few weeks, the resort was already attracting dukes and princesses and presidents, who quickly booked passage on the Atchison, Topeka & Santa Fe, the upstart railroad whose newly laid tracks were the only way to get there.

In front of the Montezuma was a large park, exquisitely landscaped with shade trees and rare flowers, planted in three train- car loads of imported sod and topsoil. At the center was a huge fountain, flanked by lawns for tennis and croquet, an archery range, and even a zoo, where the deer and the antelope literally played. The free-form park was illuminated, as was the building itself, by thousands of gaslights fed by the hotel’s own generating station.

So when “Red John” and his men approached on horseback that evening, they couldn’t believe their bloodshot eyes.

The cowboys rode first to the park, where they hollered and shot their guns in the air while galloping across the manicured bluegrass and graveled walks. The commotion could be heard throughout the hotel, from its grand entranceway to its cavernous main dining room. There it reached a tall, slim man in his mid- forties, with a perfectly groomed Van Dyke beard, deep, cautious eyes, and senses that were always cocked. He tried to ignore the noise and enjoy his dinner, but soon threw down his linen napkin and rose abruptly from his canebacked chair.

The man was dressed fastidiously in a dark blue suit with a waistcoat and dangling watch fob, the formal uniform of a Victorian gentleman from his homeland of England. But he walked quickly, with the nervous energy of America, drawing the attention of the dining room staff and some of the guests as he passed.

By the time he left the dining room, the cowboys had dismounted and were running riot through the hotel. He could hear them in the billiard hall, where they were taking target practice with the Indian relics and curios displayed above the bar, and shooting the tops off the private- label liquor bottles on the sideboard.

“Boys, put up your guns!” the Englishman called out, striding into the room.

“Who the hell are you?” Red John yelled.

“My name is Fred Harvey,” he replied. “I run this place. And I will not have any rowdies here. If you don’t behave like gentlemen, you can’t stay here and you can’t come again. Now put up your guns and take a drink with Fred Harvey!”

Although he had been in America for thirty years, Fred still retained his British accent, which made some Westerners titter.

But as the cowboys laughed, cursed, and taunted him, and hotel guests started gathering, he walked over and grabbed Red John by the collar. In a single motion, the fastidious Englishman yanked the dusty desperado over the bar and pinned him to the floor.

“You mustn’t swear in this place,” he told the stunned cowboy. There was a moment of silence— and then Red John told his men to stand down.

“Fred Harvey is a gentleman, boys,” he declared, brushing himself off. “I say, let’s have those drinks.”

When the drinks were done, they were served a midnight breakfast as well— the breakfast for which Fred Harvey was becoming famous. The freshest eggs and steak available in the country, shipped directly from farms in refrigerated train cars. Pan- size wheat cakes stacked six high. Quartered wedges of hot apple pie. And cup after cup of the best damn coffee these cowboys had ever tasted in their lives.

Red John and his men never made trouble at the Montezuma again.

But they still wanted to know, as did more and more people across the country:

Who the hell is Fred Harvey?

Stephen Fried is an award-winning journalist and New York Timesbestselling author who teaches at Columbia University Graduate School of Journalism and the University of Pennsylvania. He is, most recently, the author of the historical biography Appetite for America, and the coauthor, with Congressman Patrick Kennedy, of A Common Struggle. His earlier books include the biography Thing of Beauty: The Tragedy of Supermodel Gia and the investigative books Bitter Pills and The New Rabbi. A two-time winner of the National Magazine Award, Fried has written frequently for Vanity Fair, GQ, The Washington Post Magazine, Rolling Stone, Glamour, and Philadelphia Magazine. He lives in Philadelphia with his wife, author Diane Ayres. 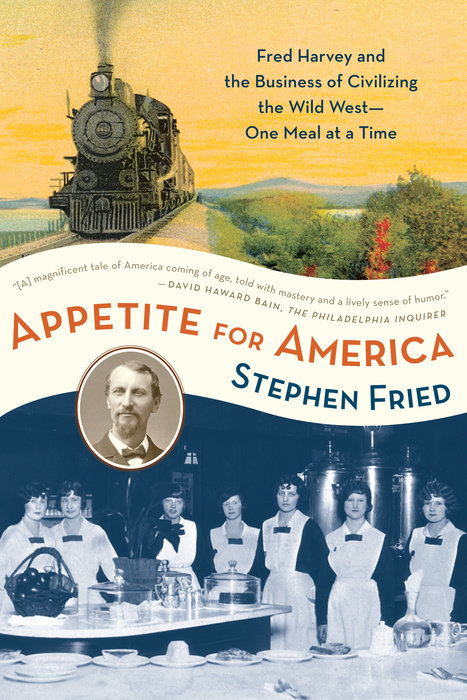