As seen in Star Wars: The Last Jedi, welcome to the casino city of Canto Bight. A place where exotic aliens, captivating creatures, and other would-be high rollers are willing to risk everything to make their fortunes. Set across one fateful evening, these four interconnected stories explore the deception and danger of the lavish casino city.

• An honest salesman meets a career criminal as a dream vacation turns into the worst nightmare imaginable, in a story by Saladin Ahmed.

• Dreams and schemes collide when a deal over a priceless bottle of wine becomes a struggle for survival, as told by Mira Grant.

• Old habits die hard when a servant is forced into a mad struggle for power among Canto Bight’s elite, in a tale by Rae Carson

• A deadbeat gambler has one last chance to turn his luck around; all he has to do is survive one wild night, as told by John Jackson Miller.

In Canto Bight, one is free to revel in excess, untouched from the problems of a galaxy once again descending into chaos and war. Dreams can become reality, but the stakes have never been higher—for there is a darkness obscured by all the glamour and luxury.

“Then eat something. But go.”

Kal’s throat went dry as he saw Minn’s hands move toward the undealt cards, ready to dispose of the decks. Please, don’t—

Kal turned to see a diminutive reptilian in a formal black coat, accentuated with a dazzling stellabora lapel bloom. The green-skinned creature flashed a smile so broad it nearly bisected his face as he dropped a fat tray of coins onto the tabletop to Kal’s right. “Deal me in,” he said, hopping up into the chair beside Kal.

Kal stared at the ebullient arrival, mystified, before looking to the dealer, who suspended her cleanup. He told Vestry, “I guess I’m in luck.”

The pit boss stared silently at the players. Kal could swear he saw her mouth form the words, That’s what you think.

“You should have been at the yacht races.” He offered a chubby green hand. “Dodibin. Dodi for short—but don’t call me that.”

“Don’t call me short.” He looked stern for a moment—and then laughed. “And you are Kaljach.”

Lucky guess, he began to say, before remembering his badge. “Kal is fine.” He watched as the Suerton—the species he thought Dodi was—unloaded his chips. Then Dodi pushed a large stack onto the instant-win marker, a side bet the casino covered from its rake.

“Excellent.” Chipper, Dodi rocked back and forth in his chair as Minn started dealing.

It was no skin off Kal’s nonexistent nose; the side bet was against the house, not him. Though he would have loved to cover it, because there was no greater joy than taking money off someone too stupid to—

Dodi flipped up his cards, all in the proper suit and sequence. “Dealt pat.”

Kal hadn’t even looked at his cards yet. He quickly did, and took note of what Dodi had shown, before Minn recovered them all. That was the risk in riding “final station,” the seat on the dealer’s right; Kal saw more cards that way, but occasionally an instant winner would cut a hand short. Fortunately, the odds said that wouldn’t happen very—

“She’s still dealing the hand!” Kal spouted. Calling early was a dumb move, disqualifying if the hand wasn’t as declared. Unless the fool actually had it?

“Well, what do you know?” Dodi said, overturning his four cards as soon as they’d landed. “I had a feeling.” He’d left his winnings from before on the instant-win marker; he’d won again. Minn went to work exchanging Dodi’s coins for higher-denomination ones.

And now, Kal saw, Vestry was back, keeping a discreet watch from behind Minn. She knew everything, or so she put on. What did she know about this guy?

The good news was Kal was only out two initial stakes, and the decks, if anything, had swung even more into his favor. If a hand ever lasted long enough for him to play, he could start building out his pyramid in pursuit of the progressive. But he was beginning to wonder what he was up against—

—and wondered some more when he heard a voice like Dodi’s, only lower-pitched, from behind. “There you are!”

Kal turned to see another Suerton, looking much like Dodi apart from a few extra centimeters’ height, more pronounced ears, and a necklace of silver ringlets. “Thodi!” Dodi said, hopping off his chair. “Kal, meet Thodi, my brother.”

“I’m the smart one,” Thodi said, and smiled. “At your service.” He glanced at Dodi’s stack on the table. “What are we doing?”

“Well, I know that.” Thodi pushed Dodi. “Step aside for the master, my good chump.”

Dodi resisted. “I was doing fine on my own.”

Dodi smirked at Kal. “He always gets me with that.” The slightly younger brother withdrew, and Thodi climbed into the chair. He looked down at Dodi’s winnings. “Oh, now, see, you’re making these silly blind bets again.” He pulled the stacks of coins back from the table and began to sort them. “What you need to do is add up the values of your cards, and bet that. If the number is even, double it. And if it’s prime, you bet your age.”

Thodi played the hand his way—and, in the end, was completely wrong. Kal won some coins, but not many. He must not be that old, Kal thought. But he could live with it. The green guys’ fortunes seemed to dim as the brothers bickered—and that meant the hands lasted longer, giving Kal more data about the decks with every card. And the Ion Barrage chance was ever closer.

This is it! Kal fought to stay calm. Forget the brothers. This was him against fate, months and months of it. This hand, he’d be all in, buying extra draws as necessary to build his pyramid. And then all his problems would be—

“Hi ho!” shouted someone in the aisle.

“Wodi!” the brothers replied in unison. “Over here!”

“What now?” Kal said. He shot an anguished look at Vestry, whose steely reserve had yet to crack. Her eyes were on the aisle, where a Suerton with a bounding gait approached—and then receded, in pursuit of a droid carrying liquid refreshments.

Dodi poked Kal in the ribs. “Wodi, my kid brother. You’ll like him, Kal. Dad used to call him the kind of guy who’d fly all the way to Alderaan if he heard a party was starting.”

“Well, Wodi wasn’t responsible.” Dodi pursed his giant lips as Wodi, having scored a tray of beverages, let out a loud whoop. “At least, I don’t think he was. When did it happen?”

Saladin Ahmed was born in Detroit and raised in a working-class, Arab American enclave in Dearborn, Michigan. His short stories have been nominated for the Nebula and Campbell awards, and have appeared in Year’s Best Fantasy and numerous magazines, anthologies, and podcasts, as well as being translated into five foreign languages. Throne of the Crescent Moon won a Locus Award for Best First Novel and was a finalist for the Hugo, Nebula, and David Gemmell Morningstar awards. Find him on Twitter at @saladinahmed.

Rae Carson is the author of the bestselling and award-winning Girl of Fire and Thorns series. Her books tend to contain adventure, magic, and smart girls who make (mostly) smart choices. Originally from California, she now lives in Arizona with her husband. 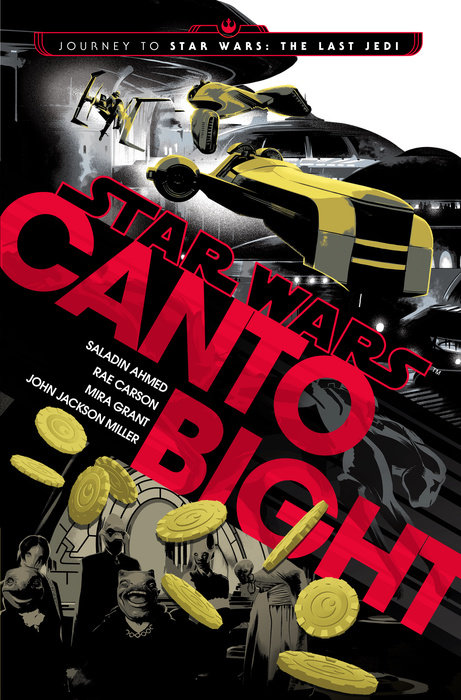