INTERNATIONAL BESTSELLER • “Merlin Sheldrake’s marvelous tour of these diverse and extraordinary life forms is eye-opening on why humans should consider fungi among the greatest of earth’s marvels. . . . Wondrous.”—Time

A mind-bending journey into the hidden universe of fungi, “one of those rare books that can truly change the way you see the world around you” (Helen Macdonald, author of H Is for Hawk).

When we think of fungi, we likely think of mushrooms. But mushrooms are only fruiting bodies, analogous to apples on a tree. Most fungi live out of sight, yet make up a massively diverse kingdom of organisms that supports and sustains nearly all living systems. Fungi provide a key to understanding the planet on which we live, and the ways we think, feel, and behave.

In Entangled Life, the brilliant young biologist Merlin Sheldrake shows us the world from a fungal point of view, providing an exhilarating change of perspective. Sheldrake’s vivid exploration takes us from yeast to psychedelics, to the fungi that range for miles underground and are the largest organisms on the planet, to those that link plants together in complex networks known as the “Wood Wide Web,”  to those that infiltrate and manipulate insect bodies with devastating precision.

Fungi throw our concepts of individuality and even intelligence into question. They are metabolic masters, earth makers, and key players in most of life’s processes. They can change our minds, heal our bodies, and even help us remediate environmental disaster. By examining fungi on their own terms, Sheldrake reveals how these extraordinary organisms—and our relationships with them—are changing our understanding of how life works.

“Entangled Life is a gorgeous book of literary nature writing in the tradition of [Robert] Macfarlane and John Fowles, ripe with insight and erudition. . . . Food for the soul.”—Eugenia Bone, Wall Street Journal

“[An] ebullient and ambitious exploration . . . This book may not be a psychedelic—and unlike Sheldrake, I haven’t dared to consume my copy (yet)—but reading it left me not just moved but altered, eager to disseminate its message of what fungi can do.”—Jennifer Szalai, The New York Times

An excerpt from Entangled Life

A heap of Piedmont white truffles (Tuber magnatum) sat on the scales on a check-­patterned rag. They were scruffy, like unwashed stones; irregular, like potatoes; socketed, like skulls. Two kilograms: €12,000. Their sweet funk filled the room, and in this aroma was their value. It was unabashed and quite unlike anything else: a lure, thick and confusing enough to get lost in.

It was early November, the height of truffle season, and I had traveled to Italy to join two truffle hunters working out of the hills around Bologna. I was lucky. A friend of a friend knew a man who dealt truffles. The dealer had agreed to set me up with his two best hunters, who in turn had consented to let me go out with them. White-­truffle hunters are famously secretive. These fungi have never been domesticated and can only be found in the wild.

Truffles are the underground fruiting bodies of several types of mycorrhizal fungi. For most of the year, truffle fungi exist as mycelial networks, sustained in part by the nutrients they obtain from the soil and also by the sugars they draw from plant roots. However, their subterranean habitat confronts them with a basic problem. Truffles are spore-producing organs, analogous to the seed-­producing fruit of a plant. Spores evolved to allow fungi to disperse themselves, but underground their spores can’t be caught by air currents and are invisible to the eyes of animals.

Their solution is to smell. But to smell above the olfactory racket of a forest is no small task. Forests are crisscrossed with smells, each a potential fascination or distraction to an animal nose. Truffles must be pungent enough for their scent to penetrate the layers of soil and enter the air, distinctive enough for an animal to take note amid the ambient smellscape, and delicious enough for that animal to seek it out, dig it up, and eat it. Every visual disadvantage that truffles face—being entombed in the soil, difficult to spot once unearthed, and visually unappealing once spotted—they make up for with smell.

Once eaten, a truffle’s job is done: An animal has been lured into exploring the soil and recruited to carry the fungus’s spores off to a new place and deposit them in its feces. A truffle’s allure is thus the outcome of hundreds of thousands of years of evolutionary entanglement with animal tastes. Natural selection will favor truffle fungi that match the preferences of their finest spore dispersers. Truffles with better “chemistry” will attract animals more successfully than those with worse. Like the orchids that mimic the appearance of sexually receptive female bees, truffles provide a depiction of animal tastes—­an evolutionary portrait in scent of animal fascination.

I was in Italy because I wanted to be drawn underground by a fungus into the chemical world in which it lived. We are ill-­equipped to participate in the chemical lives of fungi, but ripe truffles speak a language so piercing and simple that even we can understand it. In doing so, these fungi include us for a moment within their chemical ecology. How should we think about the torrents of interaction that occur between organisms underground? How should we understand these spheres of more-­than-­human communication? Perhaps running after a dog hot on the trail of a truffle and burying my face in the soil was as close as I could get to the chemical tug and promise that fungi use to conduct so many aspects of their lives.

The human sense of smell is extraordinary. Our eyes can distinguish several million colors, our ears can distinguish half a million tones, but our noses can distinguish well over a trillion different odors. Humans can detect virtually all volatile chemicals ever tested. We outperform rodents and dogs in detecting certain odors, and we can follow scent trails. Smells feature in our choice of sexual partners and in our ability to detect fear, anxiety, or aggression in others. And smell is woven into the fabric of our memories; it is common for people suffering from post-­traumatic stress disorder to have olfactory flashbacks.

Noses are finely tuned instruments. Your olfactory sense can split complex mixtures into their constituent chemicals, just as a prism can split white light into its constituent colors. To do this, it must detect the precise arrangement of atoms within a molecule. Mustard smells mustardy because of bonds between nitrogen, carbon, and sulfur. Fish smells fishy because of bonds between nitrogen and hydrogen. Bonds between carbon and nitrogen smell metallic and oily.

The ability to detect and respond to chemicals is a primordial sensory ability. Most organisms use their chemical senses to explore and make sense of their environment. Plants, fungi, and animals all use similar types of receptors to detect chemicals. When molecules bind to these receptors, they trigger a signaling cascade: One molecule triggers a cellular change, which triggers a bigger change, and so on. In this way, small causes can ripple into large effects: Human noses can detect some compounds at as low a concentration as thirty-­four thousand molecules in one square centimeter, the equivalent of a single drop of water in twenty thousand Olympic swimming pools.

For an animal to experience a smell, a molecule must land on their olfactory epithelium. In humans, this is a membrane up and behind the nose. The molecule binds to a receptor, and nerves fire. The brain gets involved as chemicals are identified or trigger thoughts and emotional responses. Fungi are equipped with different kinds of bodies. They don’t have noses or brains. Instead, their entire surface behaves like an olfactory epithelium. A mycelial network is one large chemically sensitive membrane: A molecule can bind to a receptor anywhere on its surface and trigger a signaling cascade that alters fungal behavior.

Fungi live their lives bathed in a rich field of chemical information. Truffle fungi use chemicals to communicate to animals their readiness to be eaten; they also use chemicals to communicate with plants, animals, other fungi—­and themselves. It isn’t possible to understand fungi without exploring these sensory worlds, but they are hard for us to interpret. Perhaps it doesn’t matter. Like fungi, we spend much of our lives being drawn toward things. We know what it is to be attracted or repelled. Through smell, we can participate in the molecular discourse fungi use to organize much of their existence.

In human history, truffles have long been associated with sex. The word for truffle in many languages translates to “testicle,” as in the old Castilian turmas de tierra, or earth’s testicles. Truffle fungi have evolved to make animals giddy because their lives depend on it. As I spoke with Charles Lefevre, a truffle scientist and cultivator in Oregon, about his work with the Périgord black truffle, he broke off: “Funny—­as I’m saying this I am ‘bathing’ in the virtual aroma of Tuber melanosporum. It’s as if a cloud of it is filling my office, but there are currently no truffles here. These olfactory flashbacks are common with truffles in my experience. They can even include visual and emotional memories.”

In France, Saint Anthony—­the patron saint of lost objects—­is regarded as the patron saint of truffles, and truffle masses are celebrated in his honor. Prayers do little to stop the skulduggery. Cheap truffles are stained or flavored to pass them off as their more valuable cousins. Prized truffle forests are targeted by truffle poachers. Expertly trained dogs worth thousands of euros are stolen. Poisoned meat is strewn around woods to kill the dogs of rival hunters. In 2010, in a crime of passion, a French truffle farmer, Laurent Rambaud, shot dead a truffle thief he encountered while patrolling his truffle orchards during the night. Following his arrest, two hundred and fifty supporters marched in support of Rambaud’s right to defend his crop, angry at the rise in thefts of both truffles and truffle dogs. The deputy head of the Tricastin truffle growers’ union told La Provence newspaper that he had advised fellow producers never to patrol their fields with a gun because “the temptation is too high.” Lefevre put it well: “Truffles bring out the dark side of people. It’s like money lying on the ground, but it’s perishable and mercurial.”

Merlin Sheldrake is a biologist and a writer. He received a Ph.D. in tropical ecology from the University of Cambridge for his work on underground fungal networks in tropical forests in Panama, where he was a predoctoral research fellow of the Smithsonian Tropical Research Institute. He is a musician and keen fermenter. Entangled Life is his first book. 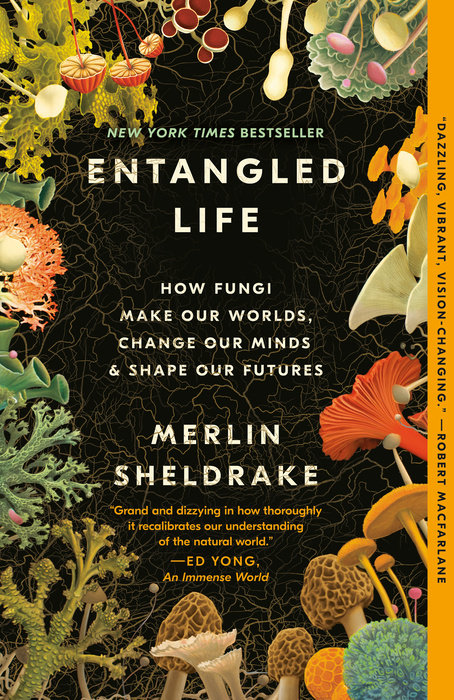