LOS ANGELES TIMES AND PUBLISHERS WEEKLY BESTSELLER • The powerful memoir of a young doctor and former college athlete diagnosed with a rare disease who spearheaded the search for a cure—and became a champion for a new approach to medical research.

“A wonderful and moving chronicle of a doctor’s relentless pursuit, this book serves both patients and physicians in demystifying the science that lies behind medicine.”—Siddhartha Mukherjee, New York Times bestselling author of The Emperor of All Maladies and The Gene

David Fajgenbaum, a former Georgetown quarterback, was nicknamed the Beast in medical school, where he was also known for his unmatched mental stamina. But things changed dramatically when he began suffering from inexplicable fatigue. In a matter of weeks, his organs were failing and he was read his last rites. Doctors were baffled by his condition, which they had yet to even diagnose. Floating in and out of consciousness, Fajgenbaum prayed for a second chance, the equivalent of a dramatic play to second the game into overtime.

Miraculously, Fajgenbaum survived—only to endure repeated near-death relapses from what would eventually be identified as a form of Castleman disease, an extremely deadly and rare condition that acts like a cross between cancer and an autoimmune disorder. When he relapsed while on the only drug in development and realized that the medical community was unlikely to make progress in time to save his life, Fajgenbaum turned his desperate hope for a cure into concrete action: Between hospitalizations he studied his own charts and tested his own blood samples, looking for clues that could unlock a new treatment. With the help of family, friends, and mentors, he also reached out to other Castleman disease patients and physicians, and eventually came up with an ambitious plan to crowdsource the most promising research questions and recruit world-class researchers to tackle them. Instead of waiting for the scientific stars to align, he would attempt to align them himself.

More than five years later and now married to his college sweetheart, Fajgenbaum has seen his hard work pay off: A treatment  he identified has induced a tentative remission and his novel approach to collaborative scientific inquiry has become a blueprint for advancing rare disease research. His incredible story demonstrates the potency of hope, and what can happen when the forces of determination, love, family, faith, and serendipity collide.

Praise for Chasing My Cure

“A page-turning chronicle of living, nearly dying, and discovering what it really means to be invincible in hope.”—Angela Duckworth, #1 New York Times bestselling author of Grit

An excerpt from Chasing My Cure

After you’ve mastered the basics of technique—hand placement, head tilt, and timing—and after you’ve accepted the inevitable feeling of shattering ribs beneath the heels of your hands, the hardest thing about performing CPR is knowing when to stop.

What if one more pump could do it?

Or one more after that?

When—no matter how hard you push, how hard you hope and pray—that pulse just will not return, then what comes next is entirely up to you. The life has already been lost. But hope hasn’t been, not necessarily. You could keep that alive at least. You could keep doing compressions until your arms and shoulders are too worn out to continue, until you can’t push hard enough to make a difference, much less break another rib.

So—how long do you try to bring someone back?

Eventually you will remove your hands from the body, eventually you’ll have to—but eventually isn’t a number. It isn’t guidance. You won’t see it in a CPR diagram. And it doesn’t even really answer “when” so much as “why.” When you eventually stop, you stop because there’s no more hope. That’s what makes the decision so difficult. Your effort allows you to hope that life is possible, and your hope inspires you to push even harder. The three of those things—hope, life, and effort—chase one another, keep one another moving around a track.

I have performed CPR twice in my life. Both times, the patients were nearly dead when I began my relentless chest compressions and prayers. And both ended up dying. I didn’t want to stop. I wish I was still going right now. And I continued to hope that I’d see a pulse appear on the heart monitor even after I had stopped my chest compressions. But hoping and wishing are often not enough. Hope can be a force; but it isn’t a superpower. Neither is any part of medicine, much as we’d like it to be.

When I set out to be a doctor, I had already borne witness to incurable disease and inconsolable sadness—my mother had died of brain cancer when I was in college—but I was still optimistic about the power of science and medicine to find answers and cures. Because to be honest, long after I could reasonably blame it on youth and naïveté, I basically believed in the Santa Claus theory of civilization: that for every problem in the world, there are surely people working diligently—in workshops near and far, with powers both practical and magical—to solve it. Or perhaps they’ve already solved it.

That faith has perverse effects, especially in medicine. Believing that nearly all medical questions are already answered means that all you need to do is find a doctor who knows the answers. And as long as Santa-doctors are working diligently on those diseases for which there are not yet answers, there is no incentive for us to try to push forward progress for these diseases when they affect us or our loved ones.

I know better now. I’ve had a lot of time over the past few years to think about doctors, and they’ve had a lot of time to think about me. One thing I’ve learned is that every one of us who puts on a white coat has a fraught relationship with the concept of authority. Of course, we all train and grind for years and years to have it. We all want it. And we all seek to be the trusted voice in the room when someone else is full of urgent questions. And the public expects near omniscience from physicians. But at the same time, all of that education, all those books, all those clinical rotations, all of it instills in us a kind of realism about what is and what is not ultimately possible. Not one of us knows all there is to know. Not even nearly. We may perform masterfully from time to time—and a select few may really be masterful at particular specialties—but by and large we accept our limits. It’s not easy. Because beyond those limits are mirages of omnipotence that torture us: a life we could have saved, a cure we could have found. A drug. A diagnosis. A firm answer.

The truth is that no one knows everything, but that’s not really the problem. The problem is that, for some things, no one knows anything, nothing is being done to change that, and sometimes medicine can be frankly wrong.

I still believe in the power of science and medicine. And I still believe in the importance of hard work and kindness. And I am still hopeful. And I still pray. But my adventures as both a doctor and a patient have taught me volumes about the often unfair disconnect between the best that science can offer and our fragile longevity, between thoughts and prayers and health and well-being.

This is a story about how I found out that Santa’s proxies in medicine didn’t exist, they weren’t working on my gift, and they wouldn’t be delivering me a cure. It’s also a story about how I came to understand that hope cannot be a passive concept. It’s a choice and a force; hoping for something takes more than casting out a wish to the universe and waiting for it to occur. Hope should inspire action. And when it does inspire action in medicine and science, that hope can become a reality, beyond your wildest dreams.

In essence, this is a story about dying, from which I hope you can learn about living.

David Fajgenbaum, MD, MBA, MSc, is a graduate of Georgetown University, the University of Oxford, the University of Pennsylvania, and the Wharton School. An assistant professor of medicine at the University of Pennsylvania and the associate director for the Orphan Disease Center, he is cofounder and executive director of the Castleman Disease Collaborative Network, as well as the cofounder of the National Students of Ailing Mothers and Fathers Support Network. Dr. Fajgenbaum has been recognized with multiple awards, including the Forbes “30 Under 30” for healthcare and the RARE Champion of Hope Award for science. He has been profiled by major media outlets such as The New York Times, Forbes, Science, Reader’s Digest, and the Today show. He lives in Philadelphia with his wife, Caitlin, and their daughter, Amelia. 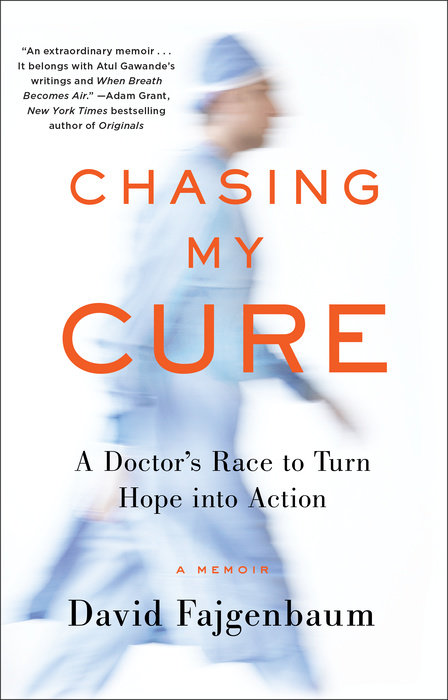