Bea Schumacher is a devastatingly stylish plus-size fashion blogger who has amazing friends, a devoted family, legions of Insta followers—and a massively broken heart. Like the rest of America, Bea indulges in her weekly obsession: the hit reality show Main Squeeze. The fantasy dates! The kiss-off rejections! The surprising amount of guys named Chad! But Bea is sick and tired of the lack of body diversity on the show. Since when is being a size zero a prerequisite for getting engaged on television?

Just when Bea has sworn off dating altogether, she gets an intriguing call: Main Squeeze wants her to be its next star, surrounded by men vying for her affections. Bea agrees, on one condition—under no circumstances will she actually fall in love. She’s in this to supercharge her career, subvert harmful beauty standards, inspire women across America, and get a free hot air balloon ride. That’s it.

But when the cameras start rolling, Bea realizes things are more complicated than she anticipated. She’s in a whirlwind of sumptuous couture, Internet culture wars, sexy suitors, and an opportunity (or two, or five) to find messy, real-life love in the midst of a made-for-TV fairy tale. In this joyful, wickedly observant debut, Bea has to decide whether it might just be worth trusting these men—and herself—for a chance to live happily ever after.

An excerpt from One to Watch

“What do you think?”

Bea was standing before an oversized mirror in the wardrobe room, where Alison had placed her in a navy Zac Posen jumpsuit with long sleeves, flowing legs, a ruffled collar, and a plunging neckline, all woven through with sparkling thread that gleamed copper and silver and gold, making Bea shimmer like a galaxy. With her makeup soft and romantic (and caked on thick enough to withstand hot lights and high-def cameras) and her hair in glossy waves, Bea almost felt like the television star she was about to become.

“I think you’re a magician,” she said breathlessly, and Alison beamed.

“Okay!” Lauren clapped her hands as she strode into the room. “Let’s see our Main Squeeze.”

Bea did a little twirl for Lauren, who grinned with approval. “This is perfect!”

Lauren herself looked game-day ready in her uniform of skinny jeans with a white tee, black blazer, and heels, her auburn hair pulled back in a perfect ponytail.

“What happens if I say no?” Bea’s heart started pounding as it sank in that this was really happening. Had she been completely insane to say yes? What if the whole adventure was an unmitigated disaster?

“It’s gonna be a piece of cake,” Lauren assured Bea as she guided her toward the makeshift studio the crew had constructed on the mansion’s front lawn. “I know it’s your first time doing anything like this, but this is my fifth season running this show, and Johnny could host a Main Squeeze premiere in his sleep.”

The host of Main Squeeze, Johnny Ducey, was an erstwhile teen heartthrob (he’d famously mauled hearts in the fantasy Shakespeare crossover Whither the Werewolf?). After several public bouts with addiction and subsequent stints in rehab, he’d settled into his lucrative and unchallenging work on Main Squeeze, where, it was rumored, he’d slept with female contestants more than once. After so many years watching him conduct earnest interviews with assorted reality stars, it was wild for Bea to contemplate that, in a matter of minutes, she’d be the one sitting opposite him.

“Let’s run down the schedule one more time,” Lauren continued. “Act 1 is the video package introducing you to America, then your interview with Johnny—that’s eight minutes total. Then we cut to commercial—”

“And then we intro the first five men,” Bea broke in, reciting the call sheet she’d memorized by rote. “Another break, another five men, another break, and so on until I’ve met all twenty-five of them. Then they all put on noise-canceling headphones while I give my impressions of them, then I put on noise-canceling headphones while they give their impressions of me.”

Bea paused here as she tried to stave off a wave of nausea—why exactly had she agreed to let a bunch of strange men judge her on live television?

“You’re sure these men are what I asked for?” she asked Lauren. “Diverse, smart, open-minded?”

“Bea, absolutely.” Lauren gave Bea’s arm a squeeze. “There are a couple of villains in the mix—we’re still making a television show—but I don’t want you to worry. You’re going to love spending time with these guys.”

“But what if they don’t love spending time with me?” Bea hated herself for letting her insecurities creep in like this, but the closer they got to air, the more she could feel her anxiety taking hold. “What if they hate me, and the audience does too?”

“I promise, that’s not going to happen,” Lauren reassured her. “I have a plan for tonight specifically to guarantee that everyone in America will be rooting for you.”

“Plan?” Bea was skeptical. “What kind of plan? Why don’t I know about it?”

“Because I need your reactions on camera to be genuine!” Lauren grinned. “So don’t worry, okay? I’ve got your back, Bea. We all do.”

“If you say so,” Bea grumbled, but she still found it difficult to believe that everything was really going to work out as perfectly as Lauren insisted.

They’d arrived in the mansion’s entryway: Just outside the front door, the lawn had been transformed into a makeshift studio, complete with a stage, a barrage of light and camera setups, and a live audience of a hundred Main Squeeze superfans, all of whom had won an Instagram contest for the privilege of being there, and whose feverish chatter Bea could hear through the door over the whir of the enormous generators powering the whole operation.

“Hey, Bea.” Mack, a bushy-bearded sound guy in his fifties, arrived to mic Bea up. “You ready?”

Bea nodded, feeling less and less sure that she actually was.

“Where are the men now?” she asked Lauren as Mack placed a microphone pack in a specially molded pocket Alison had affixed to the back of Bea’s jumpsuit.

“In a trailer outside.” Lauren paused, hearing something come through on her headset. “Okay, Bea, we’re five out from air—I’ve got to get to the control room. How do you feel? Are you good?”

“Yeah, I know, it’s a lot. You’re going to kick ass, okay? Just go out there and be brazen and bold and unapologetically yourself. Failing that, just smile and say you’re ready for love.”

Bea forced herself to nod, and then Lauren was gone.

“Bea, can you say something for me? I need to test your level.”

“What should I say?” she asked Mack. He smiled kindly.

“Tell me what you’re most excited about for tonight.”

Bea knew what she was supposed to say: that she was excited to potentially meet her future husband. But she didn’t believe that, and she didn’t really want to lie about it—not when there weren’t any cameras to pretend for.

“I’m excited for all the little girls who are going to watch this and think, She looks like me.”

Mack gave Bea a warm smile, and in the next instant, a producer was tugging on Bea’s sleeve, leading her out the front door, down the wide stone steps, and into the living rooms of several million Americans.

Kate Stayman-London is a novelist, screenwriter, and political strategist. She served as lead digital writer for Hillary Rodham Clinton's 2016 presidential campaign and has written for notable figures ranging from President Obama and Malala Yousafzai to Anna Wintour and Cher. When not writing or traveling, Kate can be found obsessively ranking Taylor Swift songs, laughing loudly with friends over really good bottles of wine, and of course, watching reality TV. She lives in Los Angeles. 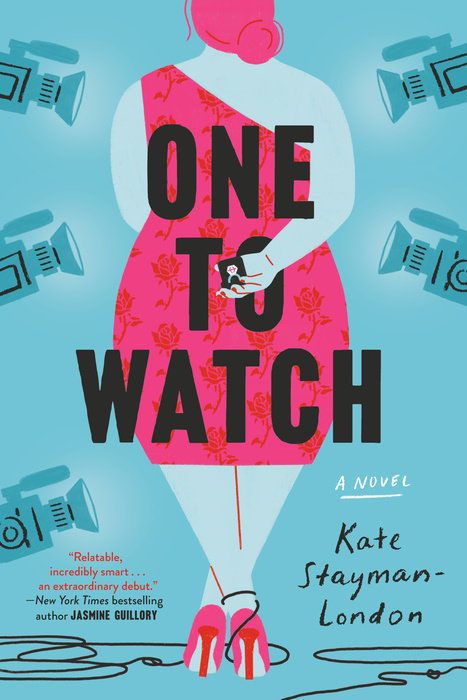