Book Club Pick for Now Read This, from PBS NewsHour and The New York Times • “A whip-smart, challenging book.”—Zadie Smith • “Jia Tolentino could be the Joan Didion of our time.”—Vulture

Jia Tolentino is a peerless voice of her generation, tackling the conflicts, contradictions, and sea changes that define us and our time. Now, in this dazzling collection of nine entirely original essays, written with a rare combination of give and sharpness, wit and fearlessness, she delves into the forces that warp our vision, demonstrating an unparalleled stylistic potency and critical dexterity.

Trick Mirror is an enlightening, unforgettable trip through the river of self-delusion that surges just beneath the surface of our lives. This is a book about the incentives that shape us, and about how hard it is to see ourselves clearly through a culture that revolves around the self. In each essay, Tolentino writes about a cultural prism: the rise of the nightmare social internet; the advent of scamming as the definitive millennial ethos; the literary heroine’s journey from brave to blank to bitter; the punitive dream of optimization, which insists that everything, including our bodies, should become more efficient and beautiful until we die. Gleaming with Tolentino’s sense of humor and capacity to elucidate the impossibly complex in an instant, and marked by her desire to treat the reader with profound honesty, Trick Mirror is an instant classic of the worst decade yet.

An excerpt from Trick Mirror

The I in the Internet

In the beginning the internet seemed good. “I was in love with the internet the first time I used it at my dad’s office and thought it was the ULTIMATE COOL,” I wrote, when I was ten, on an Angelfire subpage titled “The Story of How Jia Got Her Web Addiction.” In a text box superimposed on a hideous violet background, I continued:

But that was in third grade and all I was doing was going to Beanie Baby sites. Having an old, icky bicky computer at home, we didn’t have the Internet. Even AOL seemed like a far-off dream. Then we got a new top-o’-the-line computer in spring break ’99, and of course it came with all that demo stuff. So I finally had AOL and I was completely amazed at the marvel of having a profile and chatting and IMS!!

Then, I wrote, I discovered personal webpages. (“I was astonished!”) I learned HTML and “little Javascript trickies.” I built my own site on the beginner-hosting site Expage, choosing pastel colors and then switching to a “starry night theme.” Then I ran out of space, so I “decided to move to Angelfire. Wow.” I learned how to make my own graphics. “This was all in the course of four months,” I wrote, marveling at how quickly my ten-year-old internet citizenry was evolving. I had recently revisited the sites that had once inspired me, and realized “how much of an idiot I was to be wowed by that.”

I have no memory of inadvertently starting this essay two decades ago, or of making this Angelfire subpage, which I found while hunting for early traces of myself on the internet. It’s now eroded to its skeleton: its landing page, titled “THE VERY BEST,” features a sepia-toned photo of Andie from Dawson’s Creek and a dead link to a new site called “THE FROSTED FIELD,” which is “BETTER!” There’s a page dedicated to a blinking mouse GIF named Susie, and a “Cool Lyrics Page” with a scrolling banner and the lyrics to Smash Mouth’s “All Star,” Shania Twain’s “Man! I Feel Like a Woman!” and the TLC diss track “No Pigeons,” by Sporty Thievz. On an FAQ page—there was an FAQ page— I write that I had to close down my customizable cartoon-doll section, as “the response has been enormous.”

It appears that I built and used this Angelfire site over just a few months in 1999, immediately after my parents got a computer. My insane FAQ page specifies that the site was started in June, and a page titled “Journal”—which proclaims, “I am going to be completely honest about my life, although I won’t go too deeply into personal thoughts, though”—features entries only from October. One entry begins: “It’s so HOT outside and I can’t count the times acorns have fallen on my head, maybe from exhaustion.” Later on, I write, rather prophetically: “I’m going insane! I literally am addicted to the web!”

In 1999, it felt different to spend all day on the internet. This was true for everyone, not just for ten-year-olds: this was the You’ve Got Mail era, when it seemed that the very worst thing that could happen online was that you might fall in love with your business rival. Throughout the eighties and nineties, people had been gathering on the internet in open forums, drawn, like butterflies, to the puddles and blossoms of other people’s curiosity and expertise. Self-regulated newsgroups like Usenet cultivated lively and relatively civil discussion about space exploration, meteorology, recipes, rare albums. Users gave advice, answered questions, made friendships, and wondered what this new internet would become.

Because there were so few search engines and no centralized social platforms, discovery on the early internet took place mainly in private, and pleasure existed as its own solitary reward. A 1995 book called You Can Surf the Net! listed sites where you could read movie reviews or learn about martial arts. It urged readers to follow basic etiquette (don’t use all caps; don’t waste other people’s expensive bandwidth with overly long posts) and encouraged them to feel comfortable in this new world (“Don’t worry,” the author advised. “You have to really mess up to get flamed.”). Around this time, GeoCities began offering personal website hosting for dads who wanted to put up their own golfing sites or kids who built glittery, blinking shrines to Tolkien or Ricky Martin or unicorns, most capped off with a primitive guest book and a green-and-black visitor counter. GeoCities, like the internet itself, was clumsy, ugly, only half functional, and organized into neighborhoods: /area51/ was for sci-fi, /westhollywood/ for LGBTQ life, /enchantedforest/ for children, /petsburgh/ for pets. If you left GeoCities, you could walk around other streets in this ever-expanding village of curiosities. You could stroll through Expage or Angelfire, as I did, and pause on the thoroughfare where the tiny cartoon hamsters danced. There was an emergent aesthetic—blinking text, crude animation. If you found something you liked, if you wanted to spend more time in any of these neighborhoods, you could build your own house from HTML frames and start decorating.

This period of the internet has been labeled Web 1.0—a name that works backward from the term Web 2.0, which was coined by the writer and user-experience designer Darcy DiNucci in an article called “Fragmented Future,” published in 1999. “The Web we know now,” she wrote, “which loads into a browser window in essentially static screenfuls, is only an embryo of the Web to come. The first glimmerings of Web 2.0 are beginning to appear. . . . The Web will be understood not as screenfuls of texts and graphics but as a transport mechanism, the ether through which interactivity happens.” On Web 2.0, the structures would be dynamic, she predicted: instead of houses, websites would be portals, through which an ever-changing stream of activity—status updates, photos—could be displayed. What you did on the internet would become intertwined with what everyone else did, and the things other people liked would become the things that you would see. Web 2.0 platforms like Blogger and Myspace made it possible for people who had merely been taking in the sights to start generating their own personalized and constantly changing scenery. As more people began to register their existence digitally, a pastime turned into an imperative: you had to register yourself digitally to exist.

In a New Yorker piece from November 2000, Rebecca Mead profiled Meg Hourihan, an early blogger who went by Megnut. In just the prior eighteen months, Mead observed, the number of “weblogs” had gone from fifty to several thousand, and blogs like Megnut were drawing thousands of visitors per day. This new internet was social (“a blog consists primarily of links to other Web sites and commentary about those links”) in a way that centered on individual identity (Megnut’s readers knew that she wished there were better fish tacos in San Francisco, and that she was a feminist, and that she was close with her mom). The blogosphere was also full of mutual transactions, which tended to echo and escalate. The “main audience for blogs is other bloggers,” Mead wrote. Etiquette required that, “if someone blogs your blog, you blog his blog back.”

Through the emergence of blogging, personal lives were becoming public domain, and social incentives—to be liked, to be seen—were becoming economic ones. The mechanisms of internet exposure began to seem like a viable foundation for a career. Hourihan cofounded Blogger with Evan Williams, who later cofounded Twitter. JenniCam, founded in 1996 when the college student Jennifer Ringley started broadcasting webcam photos from her dorm room, attracted at one point up to four million daily visitors, some of whom paid a subscription fee for quicker-loading images. The internet, in promising a potentially unlimited audience, began to seem like the natural home of self-expression. In one blog post, Megnut’s boyfriend, the blogger Jason Kottke, asked himself why he didn’t just write his thoughts down in private. “Somehow, that seems strange to me though,” he wrote. “The Web is the place for you to express your thoughts and feelings and such. To put those things elsewhere seems absurd.”

Every day, more people agreed with him. The call of self-expression turned the village of the internet into a city, which expanded at time-lapse speed, social connections bristling like neurons in every direction. At ten, I was clicking around a web ring to check out other Angelfire sites full of animal GIFs and Smash Mouth trivia. At twelve, I was writing five hundred words a day on a public LiveJournal. At fifteen, I was uploading photos of myself in a miniskirt on Myspace. By twenty-five, my job was to write things that would attract, ideally, a hundred thousand strangers per post. Now I’m thirty, and most of my life is inextricable from the internet, and its mazes of incessant forced connection—this feverish, electric, unlivable hell.

Jia Tolentino is a staff writer at The New Yorker. Raised in Texas, she studied at the University of Virginia before serving in Kyrgyzstan in the Peace Corps and receiving her MFA in fiction from the University of Michigan. She was a contributing editor at The Hairpin and the deputy editor at Jezebel, and her work has appeared in The New York Times Magazine, Grantland, Pitchfork, and other publications. She lives in Brooklyn. 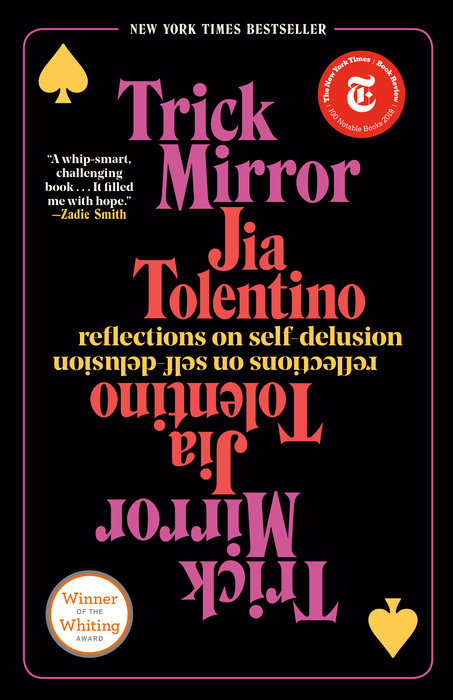