A Park Avenue princess discovers the dark side of 1930s New York when a debutante ball turns deadly in this gripping historical mystery for readers of Victoria Thompson, Susan Elia MacNeal, and Rhys Bowen.

Manhattan, 1938. Tired of being trapped in the gilded cage of her family’s expectations, Elizabeth Adams has done what no self-respecting socialite would think to do: She’s gotten herself a job. Although Elizabeth’s dream is to one day see her photographs on the front page of the Daily Trumpet, for now she’s working her way up as the newsroom’s gal Friday.

But fetching coffee isn’t exactly her idea of fun. So when veteran reporter Ralph Kaminsky needs a photographer to fill in for a last-minute assignment, Elizabeth jumps at the chance. At the Waldorf Hotel, Elizabeth is tasked with tracking down the season’s “It girl,” Gloria DeWitt, who will be making her society debut. Working her own connections to New York’s upper crust, Elizabeth manages to land an exclusive interview with Gloria.

Then Gloria’s stepmother is shot dead in a Waldorf bathroom, placing Elizabeth at the scene of a headline-worthy scandal: “Murder of a Society Dame.” Now Elizabeth will have to get the scoop on the killer before her good name gets dragged through the gossip columns—or worse. . . .

Elizabeth Adams will return in Murder, She Uncovered!

An excerpt from Murder, She Reported

It was six-thirty at night and Elizabeth Adams was still at her desk. The newsroom was comparatively quiet—the usual cacophony of clattering typewriter keys absent for the time being.

Most of the reporters had fled to a tenement building on Eighth Avenue where a man was holed up in a standoff with the police. He’d just killed his wife and was threatening to kill himself.

Elizabeth shivered. She rubbed the back of her neck and stared at the piece of paper protruding from her typewriter. Her bones ached from the cold and she was hungry. She wondered why she had thought it would be glamorous to have a job.

Instead of sitting in this drafty newsroom, she could be resting comfortably in her family’s Madison Avenue apartment listening to the radio or reading a magazine and waiting for Mrs. Murphy to put one of her excellent dinners on the table.

Elizabeth’s mother had been horrified when Elizabeth told her about the job—crying and twisting her monogrammed lace handkerchief between her fingers and asking why on earth Elizabeth couldn’t be more like Helen Cummings’s daughter Dorothy, who was engaged to Humphrey Van Alstyne and spent her time planning her wedding. How was she ever going to explain to her friends that her daughter was not only working—she said the word as if it left a foul taste in her mouth—but working for some ghastly newspaper.

A woman was meant to only have her name in the paper three times in her life, her mother reminded her—when she was born, when she married and when she died. It certainly wasn’t meant to appear under some sordid photograph on the front page.

Elizabeth had laughed and assured her mother that it would be many years before she had a credit line and probably many more years after that before she landed a picture on the front page.

Even Mrs. Murphy had gone pale when she asked why Elizabeth had come to the breakfast table with her hat already on, rushing through her boiled egg, and Elizabeth replied that she had a job and mustn’t be late.

Elizabeth groaned and put her fingers back on the keys. She had had the crazy idea that she could right social injustices and further truth by working for a newspaper. So far she had been relegated to the role of office gal Friday fetching coffee, running copy to the editor, checking sources. She sighed. She knew she had to pay her dues.

The air stirred and the scent of Tabu wafted toward her. She looked up to see Estelle Draper bearing down on her. Elizabeth hastily put her head down and pecked out a few more words.

Estelle was wearing a brown-and-white tweed suit with a nipped-in waist and a brooch on the lapel. Dark-rimmed glasses dangled from a gold chain around her neck.

Estelle was the women’s editor for the Daily Trumpet. She had made it clear from the beginning that she didn’t like her position as the only woman in the office usurped.

Elizabeth had taken pains to win Estelle over, bringing her a nickel cup of coffee from Horn & Hardart in the morning or a piece of lemon meringue pie from Schrafft’s when she learned it was Estelle’s birthday.

Estelle stopped beside Elizabeth’s desk and rapped it sharply with the yellow pencil in her hand.

“Almost,” Elizabeth mumbled, keeping her eyes on the paper protruding from her typewriter.

She hoped Estelle wouldn’t notice how little she’d done. She’d engaged in a bit of hyperbole when she’d told the paper she could type, and she was laboriously picking out each letter of Estelle’s “Dear Miss Draper” column that ran in the paper every day under Estelle’s byline.

Dear Miss Draper, Elizabeth read. My fiancé and I have broken it off. Do I have to give the engagement ring back?

Damned if I know, Elizabeth thought as she pecked out a few more words.

The scent of Tabu faded and was replaced by a sulfurous odor. Elizabeth sniffed the air. Eggs. It smelled like eggs. Her stomach grumbled.

She turned around to see Ralph Kaminsky, one of the veteran reporters, taking a sandwich out of its waxed paper wrapping. Elizabeth knew without asking that it was egg salad on rye with sliced onions. So far she had never seen Kaminsky eat anything else. He’d chase it down with cold coffee left in the thick white mug on his desk and then follow that up with a cigarette.

She wondered why he wasn’t with all the other reporters racing to Connecticut in an attempt to beat one another to the story that was bound to be on the front page of every paper in town. Crime was his beat—this story was right up his alley.

Elizabeth didn’t know much about Kaminsky—only that he lived alone, had been with the Daily Trumpet since he was a kid hired to sweep the floors and that every afternoon at four o’clock on the dot—unless he was off chasing a story—he left his desk in the newsroom to head to the bar across the street for a shot of Old Schenley’s and a cold Budweiser chaser.

As far as Elizabeth could tell, Kaminsky lived for his job, ready to sally forth into the city, day or night, to report on wretched stories of murder, theft and the more horrific cases of assault and battery.

Kaminsky was all sharp edges—bony elbows and knees—with gray hair that stood up like the bristles on a brush and a long face with a prominent nose and purple circles, like bruises, under his eyes.

The telephone on Kaminsky’s desk rang, and he grabbed it. He muttered a couple of words, sputtering bits of his egg salad sandwich into the air.

Elizabeth cringed and looked away. Kaminsky scared her a little. He was blunt to the point of being rude and had no use for women invading what he viewed as the male domain of the newsroom.

“That crumb!” Kaminsky yelled as he slammed the receiver down so hard it jumped out of the cradle and hung alongside his desk, swaying back and forth, the dial tone blaring.

“Anybody know how to work one of these?”

Elizabeth turned around again to see Kaminsky brandishing a camera.

She hesitated then raised her hand. “I do.”

Kaminsky looked startled then barked. “Get your hat and coat. Sullivan’s got the flu and Gloria DeWitt is making her debut at the Waldorf, and all predictions point to her being the ‘It Girl’ of the decade. Boss wants pictures and a story.”

Peg Cochran is the national bestselling author of No Farm, No Foul; the Cranberry Cove Mysteries; and the Gourmet De-Lite Mysteries. 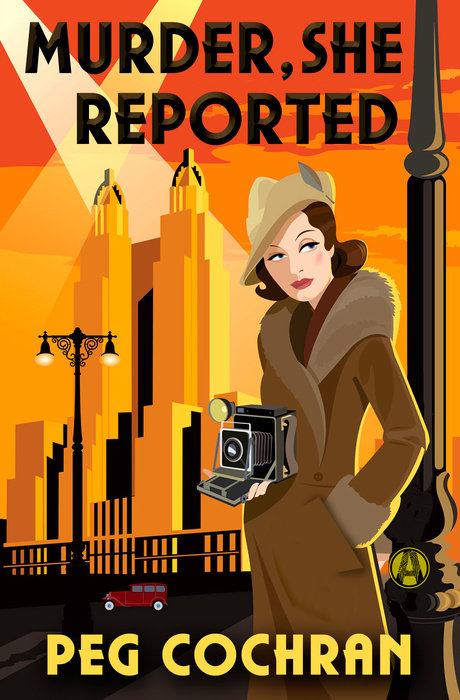