A gutsy Manhattan socialite encounters murder and corruption at the World’s Fair in this captivating historical cozy mystery for readers of Victoria Thompson, Susan Elia MacNeal, and Rhys Bowen.

New York City, 1939. A rising star at the Daily Trumpet, Elizabeth “Biz” Adams has been sent to the World’s Fair—billed as the “World of Tomorrow,” a look toward a brighter future even as the drumbeats of war grow louder—to cover a robbery. What she stumbles upon instead is a dead woman, dumped into the Aquacade’s pool with a nylon stocking wrapped around her neck.

Elizabeth snaps a photo as the police arrest Joey Dorman, a gentle young hot dog vendor who made no secret of his obsession with the murder victim. Even though she’s thrilled that her photo makes the front page, the fear and confusion evident on Joey’s face are haunting. So Elizabeth vows to prove his innocence—or his guilt—with her partner at the Daily Trumpet, Ralph Kaminsky. Meanwhile, her romance with Detective Sal Marino is heating up, and Elizabeth is more determined than ever to follow her heart.

But when Kaminsky’s efforts to expose the real killer land him in the hospital, Elizabeth is forced to continue the investigation on her own. And as she tries to narrow down the long list of suspects, she discovers a dark secret running through the Fair—a secret some would kill to protect.

Look for all of Peg Cochran’s delightful mysteries featuring Elizabeth Adams, which can be read together or separately:
MURDER, SHE REPORTED
MURDER, SHE UNCOVERED
MURDER, SHE ENCOUNTERED

An excerpt from Murder, She Encountered

“Grab your hat, Biz. We’re going to the World’s Fair.”

Elizabeth Adams looked up from the photographs she was sorting through to find Ralph Kaminsky, veteran crime reporter for the Daily Trumpet, leaning over her.

He was wearing his suit jacket, which moments ago had been hanging on the back of his chair, and his battered hat was plunked on top of his bristly gray hair.

Elizabeth had wanted to go since the Fair opened in April, and she and her friend Irene had planned to make a day of it at the end of the month. The Fair was being billed as The Dawn of a New Day and Elizabeth had read about some of the attractions including the Perisphere where an auditorium the size of Radio City Music Hall housed a mammoth model of the city of tomorrow.

“Looks like there’s been a robbery. Some crook held a gun to the head of one of the concession stand workers and demanded he hand over all the money in the till. If we get out there fast, we can snag an interview with the victim. My source swore on the blessed Virgin that he didn’t tell any other reporters about the story.”

Elizabeth tossed the photographs she was holding back on her desk and reached for her camera.

She was more than happy to get out of the newsroom. Sun glinted through the grime on the windows, and the room was stifling in the July heat. She prayed there would at least be the ghost of a breeze outside.

“Where are you headed?” Fred Culver, one of the Daily Trumpet’s newest reporters, said as he passed Elizabeth and Kaminsky on their way to the elevator.

He was quite young and had a bit of fuzz on his upper lip. Elizabeth was never sure whether it was a nascent mustache or he’d missed that spot shaving.

“We’re headed to the World’s Fair,” Kaminsky said, slapping the younger reporter on the back as he walked by.

“Some people have all the luck,” Culver shot back.

“Seniority,” Kaminsky said with a wink and a nod.

The force of the July heat hit them as soon as they exited the revolving door of the Daily Trumpet building. There was a slight breeze but it was barely strong enough to flutter the ribbon on Elizabeth’s hat. She felt the fabric of her shirtwaist dress clinging to her back as they walked toward the IND subway stop at Forty-second Street and Sixth Avenue.

Elizabeth dropped her nickel into the slot in the turnstile and pushed her way through. She and Kaminsky joined the crowd waiting on the subway platform, many of the men fanning themselves with their hats and the women daintily pressing lace-trimmed handkerchiefs to their damp foreheads.

A gust of foul smelling air came rushing down the tunnel—pushed into the station by the arriving train. Elizabeth was grateful that it wasn’t crowded and she and Kaminsky were able to get seats. She couldn’t imagine being pressed against some stranger in this heat.

They shuffled off the train with the rest of the passengers at the Smith-Ninth Street Station in Brooklyn where once again they stood on the platform waiting for the S Special train that would take them right to the World’s Fair grounds.

Elizabeth was relieved when they were able to get seats near a window that was open an inch or two. Unfortunately the breeze that came through the crack did little more than blow the hairs around her forehead. It certainly did nothing whatsoever to cool her down.

The subway emerged from the darkness to continue its journey above ground. It went over a bridge, which elevated it above another set of tracks below, through the Jamaica Yard until finally it rattled over a pine wooden trestle that took it across swampy marshland. Elizabeth stared out the window, craning her neck when she thought she saw a snowy egret standing amidst the reeds.

And then they were pulling into the World’s Fair station. Elizabeth felt her excitement rise at the thought of finally seeing the fair even if she wouldn’t be visiting any of the pavilions. She’d been reading about it ever since it opened—all the amazing exhibits—from the World of Tomorrow to Billy Rose’s Aquacade. It was all New York had been talking about for months.

The train came to a stop and the doors hissed open. Elizabeth followed Kaminsky to a row of turnstiles leading to the exit.

He turned toward Elizabeth. “You have to put in another nickel,” he said, reaching into his pocket. “Taking the train all the way to the Fair costs a dime. Highway robbery if you ask me.”

Elizabeth dutifully dug out her change purse, chose a nickel from the handful of coins, and inserted it into the turnstile. She looked back over her shoulder as they emerged from the station, which had been built especially to accommodate fairgoers. Independent Subway was spelled out in individual letters across the front and the large clock above it put the time at nearly noon.

They joined the handful of people waiting in line to pay their admission.

“Seventy-five cents,” Kaminsky said, pushing his hat back on his forehead. “They really nickel and dime you to death these days.” He turned to Elizabeth. “But don’t worry—the paper will pay you back.”

Kaminsky gave a bark of laughter and slapped himself on the forehead. “I forgot. You’re one of them rich society dames. What are a couple of dimes and nickel--you’re probably rolling in dough.”

Elizabeth gave him a stern look. “Hardly,” she said, without elaborating. No need to tell Kaminsky that she was saving every penny she could in order to have the first and last month’s rent on a place of her own. Kaminsky would think she was crazy trading the comfort of her family’s Madison Avenue apartment for a cold water flat.

Girls like Elizabeth were expected to live at home until they married but she’d made up her mind that she wanted to be on her own first. She didn’t want to be one of those women who went from her parents straight to the arms of a husband.

The subway terminal was in the amusement zone, a two hundred and eighty acre area and one of seven zones at the fair. They heard the excited shouts of children from the Children’s World exhibit to their right as well as the squeals from the fairgoers braving the parachute drop at the other end of the zone.

“Look at those fools,” Kaminsky said, cocking his head in the direction of the ride, “paying forty cents to have the wits scared out of them.”

“I don’t know,” Elizabeth said, skipping a bit to catch up with Kaminsky’s long strides, “I think it looks like fun.”

Kaminsky stopped in his tracks. “I dare you.”

Elizabeth raised her chin. “Oh? Are you paying?” She put out her hand.

Kaminsky laughed. “Okay, Biz,” he said using the nickname he’d bestowed on Elizabeth, “you’re on. But later. We’ve got a robbery victim to interview first.”

“Excuse me,” Kaminsky grabbed the arm of a young man scurrying past pushing a trash cart. “Do you know where the hot dog stand is?”

The young man pushed his cap back and scratched his forehead. He pointed in the distance. “On the other side of the lake. Past the amphitheater by the Fountain Lake gate.”

“Thanks.” Kaminsky touched the brim of his hat.

They made their way around Fountain Lake, past the amphitheater and past the stucco Mediterranean revival Florida pavilion where palm trees swayed in the slight breeze, until they spotted the blue and yellow Childs concession stand. A young man, in a matching blue and yellow uniform, was busy turning a dozen hot dogs with a fork. He looked up and smiled as Elizabeth and Kaminsky approached.

“How many? Two?” The fellow looked at Kaminsky and raised his eyebrows. “Three?”

Kaminsky shook his head. “You the fellow who was robbed?” He gestured to Elizabeth. “We’re from the Daily Trumpet.”

“Robbed?” The young man scratched his head. “I think someone’s been pulling your leg, mister. All I’ve been doing all day is selling hot dogs. I don’t know where you got that idea from.”

Kaminsky pulled a handkerchief from his pocket and wiped the back of his neck. “I got a tip that someone was robbed. Robber held a gun to the guy’s head and took all the money out of the till.”

“I haven’t heard nothing like that,” the vendor said. “And I’ve been here all day. I haven’t even had a chance to take a trip to the john.” He looked up suddenly. “Excuse me, miss,” he said to Elizabeth. “I didn’t mean no offense.”

Kaminsky swore under his breath. He turned to Elizabeth. “That Robert Belcher. He’s gonna pay for this. He set me up.”

Peg Cochran is the national bestselling author of No Farm, No Foul; the Cranberry Cove Mysteries; and the Gourmet De-Lite Mysteries. 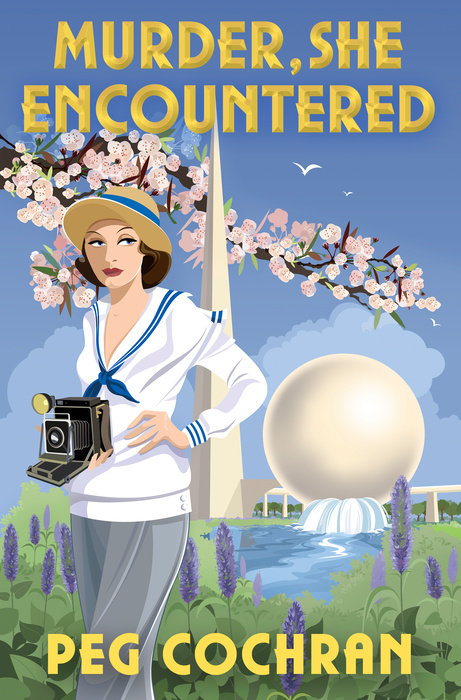