A Han and Lando Novel

NEW YORK TIMES BESTSELLER • Han Solo and Lando Calrissian are reunited on the Millennium Falcon in a galaxy-spanning novel inspired by Solo: A Star Wars Story. But even the fastest ship in the universe can’t outrun the past. . . .

The hardcover edition includes a reversible jacket, with one side featuring Han and the other featuring Lando!

It’s one of the galaxy’s most dangerous secrets: a mysterious transmitter with unknown power and a reward for its discovery that most could only dream of claiming. But those who fly the Millennium Falcon throughout its infamous history aren’t your average scoundrels. Not once, but twice, the crew of the Falcon tries to claim the elusive prize—first, Lando Calrissian and the droid L3-37 at the dawn of an ambitious career, and later, a young and hungry Han Solo with the help of his copilot, Chewbacca. But the device’s creator, the volatile criminal Fyzen Gor, isn’t interested in sharing. And Gor knows how to hold a grudge. . . .

It’s been ten years since the rebel hero Han Solo last encountered Fyzen Gor. After mounting a successful rebellion against the Empire and starting a family with an Alderaanian princess, Han hasn’t given much thought to the mad inventor. But when Lando turns up at Han’s doorstep in the middle of the night, it’s Fyzen’s assassins that he’s running from. And without Han’s help, Lando—and all life on Cloud City—will be annihilated.

With the assistance of a young hotshot pilot, an Ewok slicer prodigy, the woman who might be the love of Lando’s life, and Han’s best and furriest friend, the two most notorious scoundrels in the New Republic are working together once more. They’ll have to journey across the stars—and into the past—before Gor uses the device’s power to reshape the galaxy.

“Action-packed in all the right ways.”—Tordotcom

“A fun, breezy read, with plenty of humor, Ewok hackers, murderous robots, and rousing fight scenes as Han and Lando go from scrape to scrape [to] track down a long-forgotten enemy.”—The Verge

“Hngh . . .” Han Solo woke with a tiny foot in his face and an irri­tating droid voice in his ear. “What?” The tiny foot was attached to the tiny body of Ben Solo, mercifully sleeping for what seemed like the first time in days. Han’s eyes went wide. Would the boy wake?

“What? No!” Han sat up, still trying not to move Ben too much. He was shirtless, and his hair was almost certainly pointing in eight different directions. He probably had crust on his face. He didn’t much want to talk to Mon Mothma under regular circumstances, let alone half naked and bedheaded.

“Leia?” a voice said as the room lit up with the ghostly blue holo­projection.

Ben stirred, kicked Han once in the face.

“Oh,” Mon Mothma said, squinting at the projection that was being transmitted to wherever she was. “Excuse me, General Solo.”

“I’m not a general anymore,” Han growled, still trying to keep his voice down.

Mon Mothma nodded. “I am aware.” She already struck Han as a sort of spectral presence, all those flowy robes and that faraway look of hers. Being a see-through blue holoform only enhanced that. “It is my habit to refer to our veterans by their rank regardless of their sta­tus.”

“I could retrieve her for you,” T-2LC suggested, turning just enough so the bright hologram Mon Mothma landed on Ben’s sleep­ing face.

Ben’s eyes sprang open to a shining blue form dancing around him. He burst into tears. Han shook his head; couldn’t blame the kid, really—Han probably would’ve done the same thing if he’d suddenly woken to find himself enveloped in a Mon Mothma glow cloud. Which in a way he almost had, now that he thought about it. “Shh, come here, big guy.” He reached his hands under his son’s little arms and pulled him up so Ben was sobbing into Han’s chest. Han felt that tiny heartbeat pitter-pattering away as Ben snorfled and sniffed.

“Why didn’t you just do that in the first place?” Han whisperyelled.

“I am sorry, sir. My programming indicates that when an urgent message is received I am to immediately alert the nearest member of the household, which in this case—”

“The nerve,” Han grumbled, holding Ben against his chest as he hoisted himself off the couch. “Ooh.” A flash of pain simmered along his lower back. Old battle wounds. Or just oldness. Or both. Fantastic. The holoscreen across the room said it was 0430. He had a pile of boring meetings today, kicking off a week of planning and preparing for the inaugural meeting of the New Republic Pilots Commission, which Han had grudgingly accepted the leadership of—a mistake he was still trying to figure out how he’d been suckered into. Han hated planning. He also hated preparing. But what he really hated above everything else, besides maybe the Empire itself, was meetings. And now the Empire had been gone for more than two years, the remnants of their fleet blasted out of the sky over Jakku just as Ben was being born, in fact, and that cleared the way for meetings to take the number one slot on the Things Han Hates list.

And if there was one thing this fledgling republic loved, it was meetings.

He could probably catch a tiny snooze before he had to get ready, Han thought, lying back. Little Ben looked up groggily, those dark eyes settling on Han, studying him. Han had no idea how a two-year-old could have such ancient eyes. It was as if Ben had been waiting around for a millennium to show up at just this moment in history.
Slowly, Ben Solo’s eyes drifted closed as his chin settled on Han’s shoulder.

Han shook his head, smiling. Here he was thinking about fates and destinies. He was starting to sound like Luke.
The thought simultaneously made him smile and unsettled him, and it was that muddle of feelings that drifted along with him as sleep crept up without warning once again, and dissolved the bedroom, the fussing on the other side of the wall, the chirps of morning birds outside, the half-light of a new day, all into a pleasant haze . . .

. . . Right up until a frantic knocking once again shoved Han rudely back into the world of awake.

“What?” He slid Ben carefully off him and stood, heart pounding.

The balcony. It was coming from the door to the balcony. Keeping out of sight of the tall windows, Han picked up Ben and laid him ever so gently on the carpeted floor, on the far side of the room from the knocking. Then he crept to the bedside table, slid open the drawer, and retrieved his blaster. Disengaged the safety. Made his way to the door.

In the corner now, one hand on the doorknob, the other on the trigger, he glanced at Ben. Still asleep. Everything in Han wanted to just kick through the nearest window and let loose a barrage of blast­erfire. But that wasn’t the way, and if this was any threat at all, such recklessness would probably get himself and Ben killed.

Slowly, smoothly, he craned his neck to look at the small datascreen showing the balcony security feed.

All the tightened muscles in his body eased at the same time as he threw open the door, a huge smile breaking out across his face. There, in the purple haze of morning, stood Lando Calrissian, decked out as always in an impeccable dress shirt, half cape, shined boots, and a perfectly trimmed goatee.

One thing that was different about Lando: that wide scoundrel grin was not stretching across his face. In fact, he looked downright pissed.

Han didn’t finish because now Lando was reaching back, winding up, fist tight, and then swinging forward with what looked like all his strength. And then, sure enough, fist met face and Han flew back­ward with a shocked grunt, thinking, as the world flushed to dark­ness: I should’ve probably seen that coming.

Daniel José Older is the New York Times bestselling author of the young adult series The Shadowshaper Cypher, the Bone Street Rumba urban fantasy series, and the middle-grade historical fantasy Dactyl Hill Squad. He won the International Latino Book Award and has been nominated for the Kirkus Prize, the Mythopoeic Award, the Locus Award, the Andre Norton Award, and the World Fantasy Award. Shadowshaper was named one of Esquire’s 80 Books Every Person Should Read. You can find his thoughts on writing, read dispatches from his decade-long career as an NYC paramedic, and hear his music at his website, on YouTube, and on Twitter.

A Han and Lando Novel 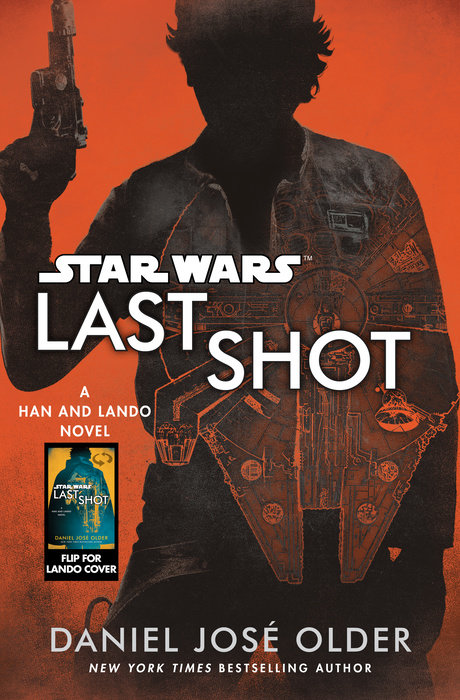