Known for her outstanding performances on the groundbreaking television series The Good Wife and ER, Julianna Margulies deftly chronicles her life and her work in this deeply powerful memoir.

NAMED ONE OF THE BEST BOOKS OF THE YEAR BY GOOD HOUSEKEEPING • “At once a tender coming-of-age story and a deeply personal look at a young woman making sense of the world against a chaotic and peripatetic childhood.”—Katie Couric

As an apple-cheeked bubbly child, Julianna was bestowed with the family nickname “Sunshine Girl.” Shuttled back and forth between her divorced parents, often on different continents, she quickly learned how to be of value to her eccentric mother and her absent father. Raised in fairly unconventional ways in various homes in Paris, England, New York, and New Hampshire, Julianna found that her role among the surrounding turmoil and uncertainty was to comfort those around her, seeking organization among the disorder, making her way in the world as a young adult and eventually an award-winning actress.

Throughout, there were complicated relationships, difficult choices, and overwhelming rejections. But there were also the moments where fate, faith, and talent aligned, leading to the unforgettable roles of a lifetime, both professionally and personally—moments when chaos had finally turned to calm.

Filled with intimate stories and revelatory moments, Sunshine Girl is at once unflinchingly honest and perceptive. It is a riveting self-portrait of a woman whose resilience in the face of turmoil will leave readers intrigued and inspired.

An excerpt from Sunshine Girl

My parents’ marriage was pretty much over by the time I was born. My father was away on a business trip when I was due, and when my mother picked him up at the airport with her large belly protruding over her waistline, my father looked at her and said, “You’re still pregnant?”

Maybe he was kidding. But to a woman nine months pregnant I can see how this could sound harsh. In any event, I waited for him to come home and entered this world three weeks late, a whopping ten pounds, four ounces. My mother likes to say, with a laugh, that she’s still recovering.

Janice Marylin Gardner married Paul Eli Margulies in 1960 after meeting him on a blind date. A ballerina for most of her life, she was born in Brooklyn to Isabel, a pianist who had studied at the Mannes School of Music and was considered a “wunderkind” who would be one of the great hopefuls to become a concert soloist. Her dreams were quashed when she met my grandfather and found herself pregnant with my mother at seventeen.

My mother’s father, Michael Gardner, owned a beauty salon on Flatbush Avenue. He was handsome and charismatic, nursing a bubbling charm with the ladies, not unlike the character Warren Beatty played in the film Shampoo. He was open about his infidelities in front of my mother, telling her this was their secret. In doing so, he made her feel special, made her his accomplice, having enough trust in her to keep this secret from my grandmother. She became his ally, too young to realize that she was joining him in his deceit.

My mother tells me ballet saved her life. From the age of ten she took the long subway ride from Flatbush Avenue to the School of American Ballet in Manhattan every day, by herself. Ballet shielded her from a home fraught with tension, alcohol, and an unhappy marriage.

She became a member of the American Ballet Theatre company right after ballet school and stayed with them for two years. At the time it was called the Ballet Theatre; it eventually became ABT. As she said, “I left because I didn’t feel I was strong enough on my toes to go any further than the chorus. I just wasn’t good enough to be a soloist.”

Instead she pursued Broadway, television, and anything that would give her a decent paycheck where she could utilize her dance background. Her first Broadway show was First Impressions with Polly Bergen and Hermione Gingold. She was a chorus girl and an understudy.

My mother was on The Fred Waring Show, the Johnny Carson show a couple of times, she toured with Sammy Davis Jr. She traveled with the General Motors Motorama show, making a living good enough to rent her own apartment in Manhattan. She was a great beauty, often compared to Ava Gardner. Slender hips, dancer’s legs, deep brown, velvety eyes surrounded by dark voluminous curls.

She met Lee Guber (who later married Barbara Walters) when she was twenty-one years old. He was fifteen years her senior and nervous about the age difference, but they were together for three years. He championed her singing and dancing career with great coaches; she met Jule Styne, who saw her potential as a big Broadway star. “I didn’t want it enough,” my mother later told me.

At the age of twenty-three, she met my father, backstage when she was in the original production of My Fair Lady. He was extremely handsome, smart, charming, and stylish. Proffering humor and intellectual conversation. After their first date, he walked her to the lobby of her Upper West Side apartment, hoping she would invite him up. When she bid him good night at the door my father gazed into her big brown eyes and said, “I can hope, I can think, and I can wait.”

She had never met anyone like him. My father came from a good family. “He was Ivy League,” she mused when reminiscing about their first date. His father, Irving Margulies, was in the leather business, mostly for upholstery. His mother, Henrietta Greenspan Margulies, was a lawyer. They lived in an impressive home in Riverdale, they were respected members of their community, they put both their sons, my father and his younger brother, Michael, through the private Horace Mann school in New York and then Dartmouth College, where my father majored in philosophy.

By the time my mother came into the picture, my father was newly divorced, having just ended a short-lived marriage, and had dropped out of Columbia Law School after one year. His explanation for dropping out: “I was always in the Philosophy Library, I had no interest in the law.”

He had married a young woman named Marcia Pressman when he was just twenty years old, between his junior and senior years at Dartmouth. She lived with him in an off-campus apartment, but by the time he got to Columbia the romance had worn off, I suppose. There are many different versions of that story, none that I can say I really know for sure, except that by the time he met my mother he was already divorced at the age of twenty-four and a law school dropout.

My father had an apartment on Carmine Street in the West Village, where he imagined his life as a poet, a writer, or a philosopher. He was a dreamer, a romantic, a profound thinker. When I asked my mother her first impression of my father’s apartment, she said, “Bach was playing on the record player, candlelight flickered on every surface, dinner was on the table. I think his mother sent Carlos, her cook from Riverdale, to supply the food; she used to do that when Paul announced he was a vegetarian. Carlos would show up with beef bourguignon and a note from Henrietta saying, ‘You need to eat meat, I don’t want you to die.’ ”

Quite soon in their romance my mother discovered she was pregnant with my eldest sister, Alexandra. She thought the best course of action was to move to Las Vegas; she could make a living dancing in one of the many shows there and raise the baby by herself. She hadn’t even thought about getting married. Paul, on the other hand, was excited at the prospect of becoming a father. They were in love so he asked her to marry him. She was turning twenty-four and already tired of show business; getting married seemed like the right thing to do.

They married in June 1960; my mother was six months pregnant. It was a small family gathering at the Waldorf Astoria; she wore a green minidress. Two days later they were on a boat to Israel via Spain. They honeymooned in Spain and then made the journey to Israel, where my sister was born. To this day I can’t get a straight answer about why they moved to Israel. I know my father had a job there, but I’ve never understood what it was or why it was so important for them to be there. I have letters my father wrote to his best friend, Alan Sklar (my godfather). In one he writes, It’s nice here. Uncomplicated. Maybe once a week we go to the movies. The landscape is stark, few trees on rolling hills, bright suns and blue skies. And no physical luxuries.

What fascinates me about the last sentence is the word “uncomplicated.” My father craved an uncomplicated life, a life where he could just sit back and read his books, write from time to time, teach now and then, and have a peaceful existence. Our life was anything but that. My father was one of the most complicated men I have ever known. My mother, probably the most complicated woman I will ever meet. Our life wasn’t drawn from the peaceful blue skies and sun-filled landscapes he speaks of in his letters. Growing up for me was a life in chaos, sometimes beautiful, always filled with love, but much of the time insecure in structure and habitat. I spent most of my childhood trying to navigate rocky terrain and almost all of my adult life, at least up until now, searching for calm.

After a year in Israel, my parents moved back to New York City, where they lived on the Upper West Side. My mother describes this time as tranquil and ideal in every way. She was a young mother, happy to walk to the park with my big sister, Alexandra; my father had secured a good job as a copywriter in an advertising agency. Not his ideal job, but now with a wife and a child he needed to make a good living, and even though it wasn’t poetry, he still was able to write for a living. They had a boatload of friends, an active social life. They enjoyed going to the theater and to dinner parties. They were a gorgeous couple with the world at their fingertips.

Two and half years after Alexandra, my middle sister, Rachel, was born. My parents were still relatively happy at this point, until my father decided that in order to have a healthy life for the children they should move to the suburbs, to Spring Valley, New York, about a forty-five-minute train ride from Manhattan. This is where my mother says it all went wrong.

As an Emmy, Golden Globe, and Screen Actors Guild award winner, Julianna Margulies has achieved success in television, theater, and film. Margulies starred as Alicia Florrick on the long-running hit CBS show The Good Wife, which she also produced, and is also well known for her role as one of the original cast members of ER. More recently, Margulies has starred on critically acclaimed series including The Morning Show, Billions, and The Hot Zone. She has been involved with Project ALS and Erin’s Law and is also a board member of the New York City–based MCC Theater company. She resides in New York City with her husband and son. 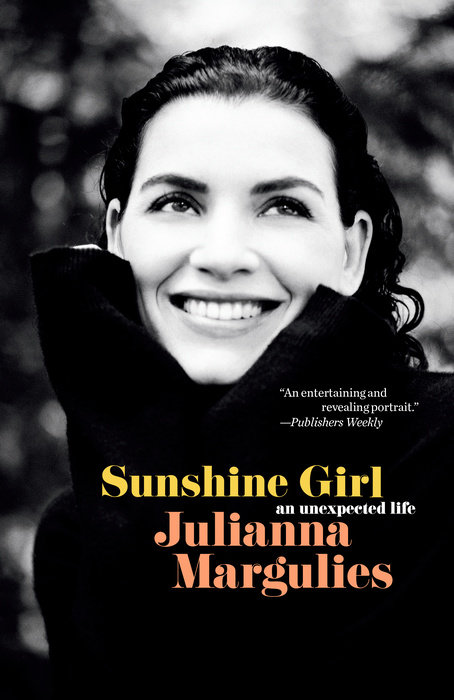