Finding Meaning, Spirituality, and a Deeper Connection to Life--in Judaism (After Finally Choosing to Look There)

“Sarah Hurwitz was Michelle Obama’s head speechwriter, and with this book she becomes Judaism’s speechwriter.”—Adam Grant, New York Times bestselling author of Give and Take, Originals, and co-author of Option B

After a decade as a political speechwriter—serving as head speechwriter for First Lady Michelle Obama, a senior speechwriter for President Barack Obama, and chief speechwriter for Hillary Clinton on her 2008 presidential campaign—Sarah Hurwitz decided to apply her skills as a communicator to writing a book . . . about Judaism. And no one is more surprised than she is.

Hurwitz was the quintessential lapsed Jew—until, at age thirty-six, after a tough breakup, she happened upon an advertisement for an introductory class on Judaism. She attended on a whim, but was blown away by what she found: beautiful rituals, helpful guidance on living an ethical life, conceptions of God beyond the judgy bearded man in the sky—none of which she had learned in Hebrew school or during the two synagogue services she grudgingly attended each year. That class led to a years-long journey during which Hurwitz visited the offices of rabbis, attended Jewish meditation retreats, sat at the Shabbat tables of Orthodox families, and read hundreds of books about Judaism—all in dogged pursuit of answers to her biggest questions. What she found transformed her life, and she wondered: How could there be such a gap between the richness of what Judaism offers and the way so many Jews like her understand and experience it?

Sarah Hurwitz is on a mission to close this gap by sharing the profound insights she discovered on everything from Jewish holidays, ethics, and prayer to Jewish conceptions of God, death, and social justice. In this entertaining and accessible book, she shows us why Judaism matters and how its message is more relevant than ever, and she inspires Jews to do the learning, questioning, and debating required to make this religion their own.

“Searching for meaning in the ancient scripture and traditions of Judaism, Sarah Hurwitz takes us along on an enriching journey of discovery. In Here All Along, she explores her birthright as a Jew and finds timeless and valuable life lessons.”—David Axelrod, director of the University of Chicago Institute of Politics and former senior advisor to President Barack Obama

An excerpt from Here All Along

Why Bother with Judaism?

A decision I made in sixth grade to violate two of the Ten Commandments nearly ended my Jewish journey.

The events that led to these transgressions took place in a fluorescent-lit, industrial-carpeted Hebrew school classroom at the synagogue in the small Boston suburb where I grew up. It was a late fall afternoon, and the light was fading, as were the dozen or so elevenand twelve-year-olds unhappily marking the beginning of their seventh year of Jewish education.

We were carrying on a timeworn American Jewish tradition whereby a couple of days a week, after regular school ended, tired, restless kids were driven to their families’ synagogues, where they sat through another few hours of class during which Jewish educators attempted to teach them to read Hebrew and appreciate an incredibly complex, four-thousand-year-old religion that can be baffling for even the most intelligent adults.

Our teacher was a weary, middle-aged man whose name I’ve forgotten. But I do recall that he insisted we call him Mr. Shalom, the Hebrew word for hello, goodbye, and peace, and that he wore a brightly patterned yarmulke, which struck me as incredibly dorky. So as far as I and my classmates were concerned, he was begging us to disrespect him. And we happily complied, haphazardly filling out the Hebrew worksheets he assigned, talking over his attempts to quiet us down, and misbehaving in ways we never would have dreamed of in real school, where we were generally model students.

About halfway through class on that otherwise unremarkable day, I had a sudden moment of clarity: I was done with all of this.

Maybe it was the poor grade I had gotten on last week’s homework assignment and Mr. Shalom’s look of disappointment as he handed it back to me. Or maybe it was the moment when several of my classmates, in a rare display of cooperative behavior, decided to gang up and make fun of me. Or maybe it was just years of accumulated boredom and the sense that while I might be stuck being Jewish, I didn’t have to waste hours each week on this pointless exercise that was keeping me from worthier 1980s preteen girl pursuits, like watching mediocre TV and reading Baby-Sitters Club and Sweet Valley High books.

Whatever it was, as I walked out the classroom door that afternoon, I decided there was no way I was ever coming back.

That night, I approached my mother and launched into an impassioned speech about how Hebrew school was failing to make me into the Jew I wanted to be. The teachers didn’t challenge us! The students didn’t take class seriously! I wasn’t learning what I needed to learn to carry on our proud tradition!

My mother was, understandably, taken aback. Neither she nor my father was particularly religious, but feeling an obligation to give me and my brother some sense of Jewish identity, they had joined the synagogue in our town and enrolled us in its Hebrew school. And twice a year, on the major Jewish holidays of Rosh Hashanah and Yom Kippur, they dragged us to services, where we squirmed through the endless droning melodies, halfheartedly recited the prayers that alternated between incomprehensible Hebrew and stilted English translations, and obeyed the seemingly random calls to stand up and sit down. The only holiday we celebrated in our home was Ḥanukkah,* but while we lit the candles and said the prayers, it was mainly about the presents.

Given our minimal Jewish practice and the fact that I had never previously displayed much interest in my Jewish education, my mother was probably suspicious of my sudden religiosity. And after some probing, she tried to stall, assuring me that she would talk to my father about it.

But I was relentless, commencing a days-long anti–Hebrew school campaign with a kind of message discipline that I find admirable today, having spent years working in political communications. At every chance I got, I let her know: This Hebrew school did not meet my needs as a Jew, and I was not going back.

Either my father bought my story or I simply wore my mother down, because within a few weeks, she found me another Hebrew school—one that mercifully met only one day a week—which agreed to take me midsemester. The following Sunday, she dropped me off for my first day of class.

Within minutes, my relief at escaping my old Hebrew school was replaced by the sinking sensation that I had done something terribly wrong, because it was clear that this new place was a bit of a loose operation. The kids were struggling to read the kind of one-syllable Hebrew words my former classmates and I had mastered years ago, and we spent much of the time singing Jewish songs with the younger children and having a meandering discussion that I think was supposed to be about Jewish ethics.

Thus began the domino effect on my Judaism. My mother soon got tired of carpooling her children to two different Hebrew schools, so she pulled my brother out of the old one and sent him to the new one with me. With that connection to our synagogue severed, it was easy enough to continue down the slippery slope of disengagement and stop attending services as well.

The following year, through my new Hebrew school, I had my bat mitzvah, which, like the curriculum, was pretty light on the Judaism. Various family members read poems and quotes. I played my flute. It was a beautiful and deeply meaningful coming-of-age ceremony, one that I will always treasure, but it bore only a passing resemblance to a Jewish life cycle ritual.

And that was about it for my Jewish observance. My ancestry stretches back through a tenement on the Lower East Side, the shtetls of Eastern Europe, and presumably all the way to the ancient Near East. But without making any kind of conscious decision beyond the one I made to dishonor my mother and father by bearing false witness to them against my Hebrew school (violating Commandments Five and Nine), I was just kind of done with Judaism.

* Note that a number of Hebrew words that appear in this book, including “Ḥanukkah,” begin with a Hebrew letter that has a guttural “H” sound and can be rendered as “H” or “Ch” in English. I’ve chosen to follow the convention of designating that guttural “H” with an “H” with a dot under it (ḥ/Ḥ) because I think “Ch” can be confusing for English speakers, who tend to mistakenly pronounce it like the “Ch” in “Chair.” I have, however, kept “Ch” when quoting from others who use it and in other select circumstances.

From 2009 to 2017, Sarah Hurwitz worked in the White House, serving as head speechwriter for First Lady Michelle Obama and as a senior speechwriter for President Barack Obama. Prior to working in government, Hurwitz was the chief speechwriter for Hillary Clinton on her 2008 campaign for president and a speechwriter for Senator John Kerry and General Wesley Clark during the 2004 presidential election. Hurwitz is a graduate of Harvard College and Harvard Law School.

Finding Meaning, Spirituality, and a Deeper Connection to Life--in Judaism (After Finally Choosing to Look There) 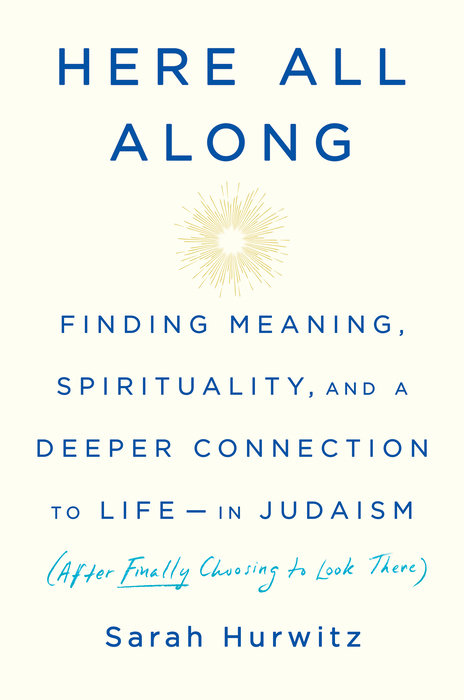