A woman with a plan—and the man who shakes it all up.

Veronica Andersen might not need a man in her life, but in the bedroom . . . well, that’s a different story. With her eye on making partner at her father’s law firm, she doesn’t have time to think about much beyond a fling. So when she can’t get her mind off the hot young thing who walks her dog, Veronica knows exactly what to do.

Brian Walsh isn’t just a dog walker. He’s a former hockey pro who’s rebuilding his life after a career-ending injury on the ice. He’s taking his time and enjoying his current freedom—and the four-legged companionship. If only he could stop fantasizing about the best two legs he’s ever seen. . . .

Brian and Veronica can’t help coming together. Again. And again. Suddenly, Veronica finds herself throwing all her best-laid plans out the window. Could she possibly have fallen in love with a man who’s wrong in every way—except the only one that matters?

An excerpt from Unmanageable

“Now, don’t you even think of giving Mrs. Clouster a hard time.” Veronica stared into Baxter’s soulful brown eyes and tried to read a promise in them. The day was going to be hard enough without him causing her any problems. She suppressed the edge of irritation that had been playing with her since she’d gotten up. “You know we’re doing this for your own good. You don’t want to get fat, do you?”

The truth was, Baxter was already fat, truly fat, roly-poly fat, and there didn’t seem to be any way to change that. Veronica could never resist that chocolate gaze, and any time she had a snack, Baxter ended up with a good part of it.

And she was hopeless at making sure he got the exercise he needed. She had the best of intentions, but her hours at work had been extreme these last months and that wasn’t even considering the three days each week she normally commuted back and forth to the city. And when winter came, that would change to almost every day. No, she was not taking good care of her boy.

Hence, Mrs. Clouster. Veronica glared down at Baxter again, at those eyes, those long silky ears. “I really need you to help me today. I have so much to get done at work and I can’t afford to be late. And don’t you even think about stopping halfway again. You know better. You weigh almost eighty pounds. How do you expect poor Mrs. Clouster to pull you? Last time she sent me a long email about how much her back hurt. I wouldn’t blame her if she left you in the yard to starve.”

Only Baxter wouldn’t starve. Chief Sullivan would bring him home again and Veronica would get a lecture on letting him escape. And she’d simply be thankful that he hadn’t been taken to the pound. Baxter, for all his age and bulk, was an escape artist. When she was watching he hardly moved from the couch, but the minute her back was turned, he was suddenly four blocks away, sitting in the middle of Nancy Beeker’s prize rose garden—or begging for his share at the Wallaces’ barbecue.

“Don’t give me that look. Mrs. Clouster’s due any minute and for once you are going to behave. I have to leave to catch the train and I don’t want you holding me up. Do you understand?”

Baxter tilted his head to the side and continued with his patient, if wanting, expression. He was the epitome of a basset hound.

No, he didn’t understand, or if he did, he’d never admit to it. The only words he ever showed an actual understanding of were cookie and dinner. Sometimes it seemed he clearly understood walk, but only because he instantly went and collapsed on the couch.

A knock sounded at the door.

Veronica glanced quickly in the mirror, making sure her lipstick was neat; ran a hand over her hips, straightening her skirt; pulled on her suit jacket; grabbed her purse, her briefcase and Baxter’s leash.

The large basset hound gave no indication that he had any intention of moving.

“I really do need to leave or I’ll miss my train.” That was far from true. She always gave herself more than enough time, but he didn’t need to know that. “Come on, boy.”

She glanced down the hall at the door. She had no intention of dragging him, even if she knew from experience that his paws almost glided over the polished boards.

Dropping his leash with a sigh, she headed for the door. She’d worry about getting him on his feet once she let Mrs. Clouster in. There was a surprising bluster to the late summer air and it wouldn’t do to keep the older woman standing on the porch.

She gave her boy one last glare and pulled open the door.

Holy hell. That was not Mrs. Clouster.

No. It definitely was not Mrs. Clouster.

She swallowed, hard, felt a flush rising up her chest.

He might be the most perfect man she’d ever seen. She tried not to gape, smoothing her skirt one more time, a deep breath pushing out her chest. Why had she worn the blouse instead of the form-fitting sleeveless turtleneck? “Hello?” she breathed out in a gasp.

She stared up at him, knowing she was tilting her head to the side just like Baxter. He was tall. So tall. Six-four. Six-five. And not in the skinny, under-built way of so many tall men. Her eyes dropped to his massive chest. No, not under-built at all. Her eyes jumped back to his face, to the crinkled green eyes staring down at her from above his neat, sun-touched beard.

She didn’t care for beards, never had. But suddenly she was fighting the urge to reach out and stroke, was wondering how those dark bristles would feel against various parts of her body.

He stared back at her.

She had to say something more. Her throat was suddenly tight. Her mouth dry.

She continued to stare. Could his eyes really be the color of sea glass sparkling in the sun? It was impossible to look away.

And he just kept looking back.

“Can I help you?” And wasn’t that a bit of a screech, nails on a chalkboard?

She blinked and blinked again. Was he so beautiful that he was shining? No, it was the morning sun rising over the trees. That’s why she was blinking.

“This is 1017 Periwinkle Way, isn’t it? My aunt told me to come pick up your dog. I’m supposed to walk him and then keep him for the day because you have to work late.”

“Your aunt?” She was beginning to understand, to figure it out, but her tongue was a little behind.

“I didn’t get a call.” She reached into her purse and pulled out her phone. Shit. It was set to silent. “Or rather, I didn’t know I’d received a call. I must not have taken it off silent. I keep getting a ‘wrong number’ early in the morning and I wanted a good night’s sleep. Oh, there it is. Yes, she called.”

“I understand. I’ve had that happen.”

She hesitated for a moment, trying to find something to say, to think of a clever reply, something to keep him talking, to keep him staring at her. “So, do you like dog walking?” And wasn’t that lame?

His eyes crinkled. “I do actually. I decided to take a break from life and couldn’t think of anything better to do.” He paused, looking at her, waiting.

Was that supposed to mean something to her? There was a strange sense of expectation. “That’s nice,” was all she could think to say—normally she was clever with words, they were how she made her living, but now it was an effort to come out with the basics.

He filled in the space, rambling slightly. “I felt entitled to a little time just doing what I wanted, and what’s better than walking on the beach in the sun. Besides, Aunt Mols is family, so she had to take me in.” He grinned, clearly quite pleased with himself.

Heat rose again, but this time for a very different reason.

Entitled. That was a strange word. The edge of irritation she’d felt earlier began to rise. People who felt entitled were almost always the opposite. Her fingers curled as she resisted the urge to ask what he’d been doing before his break, modeling? With looks like his, it didn’t seem improbable. Maybe he did a little acting too? She’d dated a man like that once, a man who thought his looks entitled him to whatever he wanted.

She was being unfair. It wasn’t about him at all—and she knew it. She stepped back. If only she didn’t find him so attractive. It was as much sexual attraction as irritation that had her reacting. She was off-kilter and feeling far too emotional.

Her backward movement finally caused him to pull his eyes from her and he glanced over her shoulder. “Is that your dog?”

She turned. Baxter had rolled onto his back and lay there with all four feet in the air. A loud snore echoed down the hall—taking her momentary upset with it. “Yes, that’s Baxter.”

Even without seeing his face, she felt him rake his eyes over her boy. “He’s not quite what I expected. Aunt Mols said he was big, but I was picturing more of a Great Dane or a Lab.”

He must have caught her tone because he said, “And nothing. I was simply surprised. I’d figured we’d go for a short run before I took him home.” He glanced down at his bare legs and running shorts.

Her eyes followed. God, he truly was perfect. No matter what she might want to think, it was impossible to deny. Muscles. Muscles. Muscles. Who could resist curling, dark blond hair on tanned skin? She forced her gaze back up, but not before noticing the brace on one knee—and the few vivid scars peeking out from beneath it.

Lavinia Kent is a former two-term president of the Washington Romance Writers and a four-time Romance Writers of America Golden Heart nominee. She lives in Washington, D.C., with her family and an ever-changing menagerie of pets. 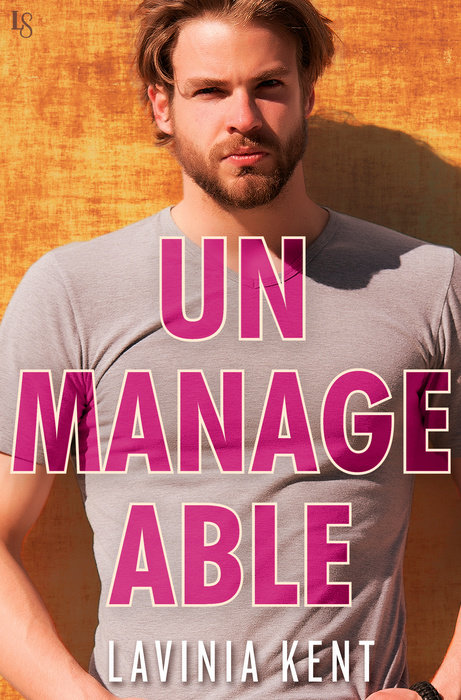