A NEW YORK TIMES NOTABLE BOOK • The fates of a cast of seemingly unconnected people converge during the celebration of an ancient holiday in “a darkly glittering novel” (The New York Times) that brings to mind Station Eleven and The Age of Miracles.

“A beautifully written, thought-provoking book about life at the end.”—Refinery29

In Domenica Ruta’s profoundly original novel, the end of the world comes once a year. Every May 28, humanity gathers to anticipate the planet’s demise—and to celebrate as if the day is truly its last.

On this holiday, three intersecting sets of characters embark on a possibly last-chance quest for redemption. In Boston, bookish wunderkind Sarah is looking for love and maybe a cosmic reversal from the much older Kurt, a tattoo artist she met at last year’s Last Day BBQ—but he’s still trying to make amends to the family he destroyed long ago. Dysfunctional Karen keeps getting into trouble, especially when the voices she’s been hearing coax her to abandon everything to search for her long-lost adoptive brother; her friend Rosette has left the Jehovah’s Witnesses to follow a new pastor at the Last Kingdom on Earth, where she brings Karen on this fateful day. Meanwhile, above them all, three astronauts on the International Space Station, Bear, an American; Russian Svec; and billionaire Japanese space tourist Yui, contemplate their lives as well as their precious Earth from afar.

With sparkling wit, verbal ingenuity, and wild imagination, Ruta has created an alternate world in which an ancient holiday brings into stark reflection our deepest dreams, desires, hopes, and fears. In this tour-de-force debut novel she has written a dazzling, haunting love letter to humanity and to our planet.

“In Ruta’s fiction debut, each May 28 people around the world gather to celebrate what could be the end of the world. The author chooses seven quite different characters, tied together in various ways (romantically, for one pair; orbiting Earth on a space station for three others). Her focus on individual needs and choices as disaster potentially looms gives her story emotional heft.”—The Washington Post

“Domenica Ruta’s empathy is broad and deep, her prose fine-grained, her humor sharp but tender. Last Day is a life-affirming antidote to these pre-apocalyptic times.”—Teddy Wayne, author of Loner

An excerpt from Last Day

“There she is,” he whispered to himself, as if a little surprised to still see her twinkling in the darkness.

It was universally agreed, Earth was always she. The astronauts needed to latch onto this umbilical pronoun, a reminder, while they were as far from home as one could be, that they were still human.

The form she took was different for everyone. Some astronauts saw an eye, others thought of her as a jewel. Just today Bear saw something new: the blue head of a baby, slathered in a caul made of clouds, crowning from out of a black womb. Bear remembered his own daughters being born, and the happy terror of that first, sickening glimpse.

It was the twenty-­sixth of May. He had completed six months of his mission on the ISS and was already preparing for his exit, still six more months away. He was a three-­hour ride from home, and though it was technically possible to make an early departure, no one in the short history of the International Space Station had ever deorbited before they were scheduled. What would it take, Bear wondered now, to justify an early exit? A medical emergency, or a family tragedy? What kind of calamity could he in good conscience withstand?

Bear stopped himself. This kind of future-­tripping was dangerous. He knew that. He’d advised other astronauts at Johnson Space Center against the countdown mentality when preparing them for their missions. You can’t stop the demons of isolation from knocking on your door, he’d say, but you can stop inviting them in for coffee.

He decided to take his own advice and redirect this morbid longing into something more productive: drafting notes for the things he would say about this mission after landing. There would be a barrage of interviews, both in-­house and for publicity, and Bear put a lot of pressure on himself to say something no one had ever said before about the experience of space flight. This womb-­birth analogy was quotable, with potential to go viral in the media, just the kind of thing he needed to preserve. He reached for the pad and pencil attached by cords to his sleeve, catching the pad but missing the pencil. He reached again and missed it, again and then again. Entwined with the floating pad, it eluded his grasp like a tiny pet playing tag.

“Got you,” he said at last. He scribbled down his notes about the earth looking like a birth in progress, then immediately crossed them out. It was a stupid metaphor. He watched the sun rise over the earth for the eleventh time that day. The clouds unthreaded for a moment and he saw the staggering blue that could only be the shallow waters of the Caribbean.

No, he decided, taking one last look at the earth before heading back to work. What he saw through the windows of the Cupola was so much more than any single human birth, more than any man could pin down with words.

He pressed his hand against the thick glass. “There you are.”

She was the biggest thing in the galaxy from this perspective, though really just a pebble. Less than a pebble. But a pretty one, Bear thought, prettier than any other; he wasn’t afraid to admit this most basic chauvinism—­to think of his home planet as better than all other bodies in space. She was his, after all. Or he was hers. He’d felt that on his first mission over a decade ago, and now on his second mission he felt it even more, a sense of humility so precious it dangled wildly on the edge of tragedy.

His watch vibrated with a reminder that his break in the Cupola was up. He’d spent as many minutes as he could possibly spare in this Earth-­sick reverie. It was time to go.

Domenica Ruta was born and raised in Danvers, Massachusetts. She is a graduate of Oberlin College and holds an MFA from the Michener Center for Writers at the University of Texas at Austin. She was a finalist for the Keene Prize for Literature and has been awarded residencies at Yaddo, the MacDowell Colony, the Blue Mountain Center, Jentel, and Hedgebrook. 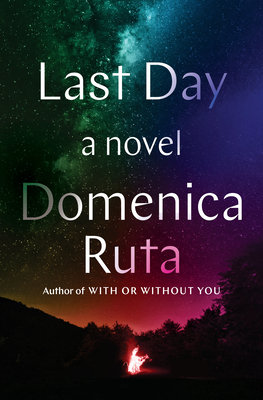