A Story of Brotherhood, Borders, and Belonging

Crossing years and continents, the harrowing story of the road to reunion for two Syrian brothers who—despite a homeland at war and an ocean between them—hold fast to the bonds of family.

“The Road from Raqqa had me gripped from the first page. I couldn’t put it down.”—Christy Lefteri, author of The Beekeeper of Aleppo

The Alkasem brothers, Riyad and Bashar, spend their childhood in Raqqa, the Syrian city that would later become the capital of ISIS. As a teenager in the 1980s, Riyad witnesses the devastating aftermath of the Hama massacre—an atrocity that the Hafez al-Assad regime commits upon its people. Wanting to expand his notion of government and justice, Riyad moves to the United States to study law, but his plans are derailed and he eventually falls in love with a Southern belle. They move to a suburb of Nashville, Tennessee, where they raise two sons and where Riyad opens a restaurant—Café Rakka—cooking the food his grandmother used to make. But he finds himself confronted with the darker side of American freedoms: the hardscrabble life of a newly arrived immigrant, enduring bigotry, poverty, and loneliness. Years pass, and at the height of Syria’s civil war, fearing for his family’s safety halfway across the world, he risks his own life by making a dangerous trip back to Raqqa.

Bashar, meanwhile, in Syria. After his older brother moves to America, Bashar embarks on a brilliant legal career under the same corrupt Assad government that Riyad despises. Reluctant to abandon his comfortable (albeit conflicted) life, he fails to perceive the threat of ISIS until it’s nearly too late.

The Road from Raqqa brings us into the lives of two brothers bound by their love for each other and for the war-ravaged city they call home. It’s about a family caught in the middle of the most significant global events of the new millennium, America’s fraught but hopeful relationship to its own immigrants, and the toll of dictatorship and war on everyday families. It’s a book that captures all the desperation, tenacity, and hope that come with the revelation that we can find home in one another when the lands of our forefathers fail us.

An excerpt from The Road from Raqqa

They used to tell a story in the desert about an eighteenth-century warrior named Ibrahim, who led an Arab army across the Levant—known long before as Mesopotamia—fighting on horseback and on camel for the Ottoman Empire. Ibrahim was loyal to the Ottomans and ruthless to their enemies, and so the empire’s leaders rewarded him with a gift. It wasn’t much, just a swath of land in the desert, tucked inside the elbow of the Euphrates River, some of the land bare and desolate, some of it green and alive.

Only Ibrahim didn’t care much for land. He was a warrior, not a settler. So he left the land untouched and continued to roam the Levant and to wage battle, uninterested in anyplace where he could not find a fight. Ibrahim had a son named Issa and a grandson named Hamed, also nomadic warriors, and Hamed had a son named Taha. When they would tell this story centuries later, the boys and girls of the desert would speculate that Taha did not like to fight like his father, grandfather, and great-grandfather, because if he liked to fight, then he would have continued roaming in search of violence, but instead he came to the land that had now been passed down to him, and he wondered if perhaps he should stay there, if perhaps he should build a life.

Taha found a spot that he liked. Dangerous tribes inhabited the land’s western and eastern edges, but here in the center was a river and an ancient wall, long ago abandoned, and the river and wall together formed something of a cocoon, and Taha decided that here he would be safe. Here he would stay.

He put up a tent and decided to make coffee. He took a stone rod and used it like a mortar and pestle to smash the beans. When they were fully ground, he mixed them with water he boiled on a fire. He waited.

A breeze wafted in from the Euphrates, carrying the smell of coffee across the desert to small and scattered tribes. They took the smell of the coffee as an invitation. One by one, members of each tribe came to Taha and joined him. Together, they sipped.

Taha asked them to stay. Settle here, he said, and let’s work together, share our resources to build a community. To convince them, he offered pieces of his land. Some said yes, and more tribes came. As the years passed, Taha gave away more pieces of his land until there were twelve subtribes in total, and together they decided that the sliver of land just north of their settlement would be the community land, to be divided among every male descendant of every original founder for as long as their city stood.

A city. Yes. That’s what it was now, with homes and markets and mosques and a school. They called it Raqqa. It would stand for centuries, here on this plot of land passed down from Ibrahim to Issa to Hamed to Taha, and its people would remain close-knit, cloistered as they were and uninterested in the outside world. Yet they would always greet visitors with extravagant welcome, providing warm beds and hearty meals and fresh coffee, just as Taha had once done.

And then one day new warriors arrived, and the people of the city looked overhead to see them, in airplanes sent by leaders in Damascus or Moscow or Washington, D.C. And those warriors dropped bombs, and those bombs pounded the city until it was barely anything more than what Taha had found on his journey through the Levant so many years ago. And Riyad and Bashar wondered what makes a city when its people have fled or died, what makes a home when a house has become rubble, what makes a family when brothers and sisters are sent to scatter across the world.

Jordan Ritter Conn is a staff writer for The Ringer. He previously worked at Grantland and ESPN: The Magazine, and he has written for The New York Times and Sports Illustrated. He is a two-time finalist for the Livingston Award, and his work has been cited or recognized by The New Yorker, The Atlantic, The New York Times, The Wall Street Journal, and Slate.

A Story of Brotherhood, Borders, and Belonging 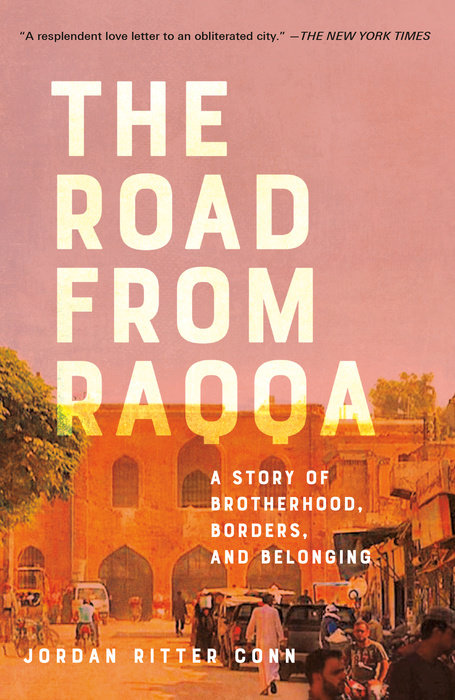