“Oh, joy, a new Peculiar Crimes Unit case by Christopher Fowler . . . the best fun is running all over the city with these amiable partners.”—The New York Times Book Review

The brilliant Arthur Bryant and John May take the late, late shift in a cat-and-mouse hunt with a killer who preys on his victims at the same time every night—the lonely hour of 4 A.M.

When a man is found hanging upside down inside a willow tree on Hampstead Heath, surrounded by a baffling assortment of occult objects, the Peculiar Crimes Unit is called in to investigate. Was this a botched satanic ritual pulled off by bored teenagers, a gang initiation, or the work of a mastermind with grander intentions? Bryant and May set off in search of answers and are soon reminded that London is a city steeped in blood and magic.

When another body is pulled from the river at dawn, it becomes clear that a killer lurks in the night. To catch him, the PCU switches to graveyard shifts, but the team still comes up short. As they explore a night city where the normal rules do not apply, they’re drawn deeper into a case that involves murder, arson, kidnapping, blackmail, loneliness, and bats.

May takes a technological approach, while Bryant goes in search of his usual academics and misfits for help, for this investigation reveals impossibilities at every turn. How do you stop a killer who appears not to exist? Luckily, impossibilities are what the Peculiar Crimes Unit does best.

An excerpt from Bryant & May: The Lonely Hour

At night London is a sea of crimson eyes.

Look—­you can see them everywhere. They peer down from the starless sky, clustered as tightly as pins on a map of the constellations. They mark the tops of the cranes that drift on the night currents and stalk the city like metal mantises, always with one red eye open to watch over the streets.

The cranes are a sure sign that whatever you’ve read or heard to the contrary, London is booming. London is always booming, because of where it is and what it was and what it has become, the sprawling home to nearly nine million people.

Ladies and gentlemen, my name is Mr Arthur Bryant and I will be your guide to the metropolis at night. Seen from up here on Hampstead Heath, London’s thoroughfares are as tangled as veins. Over there is the city’s heart, Piccadilly Circus, an electric sunburst that erases the diurnal cycle, its diodes banishing shadows and driving away miscreants. Who would have thought that the Piccadilly Commandos, those good-­time girls who lurked by the arches on the north side of the circus, would be driven out by illuminated advertisements for hamburgers?

But look, a short distance away are patches as dark as lost pages of history. Hyde, Green, Regent’s, Battersea, the parks at night are absent from London’s map of light. We stand to the north of these, in the largest, darkest blank of all: Hampstead Heath.

The heath was once densely forested, the home to boar-­hunting prehistoric tribes. The Romans drove a road through it, and those fearing the Black Death hid on it. In 1584 a great beacon was built to warn us if the Spanish Armada landed. An elm tree grew so huge here that inside it were forty-­two steps leading to a viewing platform that held twenty observers. Whenever the end of the world was predicted, Londoners came to the heath. The Gordon Rioters headed here, but were diverted with free beer at the Spaniards Inn. Literary clubs met, duellists fought and a court of law was transferred here under canvas during the Great Plague, creating ‘Judges’ Walk.’ To this day, the heath still hosts bank holiday fairs, and ‘Hampsteads’ are still rhyming slang for teeth.

The Ladies of the Night usually met at dusk on the paths into the heath. They came armed with infrared cameras, motion detectors, glow sticks, notepads and hip flasks of tea. In the winter they met only once a month because of reduced nocturnal activity. Tonight they were gathering at an unusually late hour because there was to be a cloudless sky and a full moon, and Pamela’s shift at the hospital didn’t finish until two a.m.

Matilda was the first there because she was early for everything. She volunteered for the local wildlife rescue service, which meant being willing to drive a hedgehog to an animal hospital at midnight, so this sort of activity seemed perfectly normal to her. Sparrow had yet to appear but could be heard crashing through the undergrowth from a hundred yards away. Pamela arrived with a sports bag on her back and an LED torch on her headband. She was their self-­appointed leader because she was the oldest and the most experienced. She had lately become officious because life had started to disappoint her. Sparrow had a pretty face but nothing seemed to keep her weight off. Matilda meant well. All three wore black and kept their voices low, like secret agents on a night mission.

‘That must be Sparrow,’ said Pamela, listening to the crackle of dead branches heading their way. ‘She’s as blind as a you-­know-­what and not exactly light on her feet.’

‘Is it just the three of us?’ Matilda asked. ‘Where are the others? What happened to that woman with the alarming nose?’

‘No sense of commitment.’ Pamela set down her bag. ‘I don’t know why people sign up for things if they’re not going to see them through. Mrs Hardwick stopped coming without so much as a by-your-­leave.’

‘She went into hospital,’ said Matilda.

‘She could have told me.’

‘She wasn’t. She took a beetroot salad in for a friend and got septicaemia from a trolley.’

Sparrow appeared beside them in a cascade of broken twigs. ‘Are we the only ones? I suppose it’s too late for most. They’ve no way of getting home.’ She brushed bits of bark from her bosom. ‘I came up that hill on my bike. I’ve got calves like concrete.’

‘It’s probably me.’ Sparrow checked her bag. ‘I’ve got a veggie carbonara in a Tupperware but the lid’s loose.’

‘If we want to find a winter roost we should come at dusk,’ said Matilda. ‘It’s better when the colony is active.’

‘We already know where the colony is,’ Pamela explained. ‘We need to map out the roost sites. I know it’s late but you both said you didn’t mind coming along at any time of night. Sparrow, you couldn’t make more noise if you arrived in a tractor.’

Sparrow carded holly leaves from her hair. ‘I couldn’t help it. New contacts. I’ve got drops in. I lost the path.’

‘You didn’t have to create a new one. We’re not meant to disturb anything.’ Pamela shook her head. Ungainly and eager to please, Sparrow was less like a tiny bird than a Labrador that had been kept in a small flat for too long.

Pamela turned back to Matilda. ‘We have to submit our biodiversity action plan before the end of the week or we won’t be eligible for funding. The LBG will get it all.’

The London Bat Group worked tirelessly to protect the capital’s population of noctule, pipistrelle, serotine, Natterer’s and Daubenton’s bats, but there were many other rogue groups, of which the Ladies of the Night was one.

At least nine further organizations were scattered across Greater London from Osterley Park to Oxleas Wood, and their members could be extremely territorial. This group had started out as an excuse to get away from husbands, partners and children, but had evolved into charity work that included the organization of midnight walks, fun runs, swimathons and bat studies. Pamela was tireless, which made her exhausting.

‘It’s ever so late.’ Matilda looked in her backpack for something to drink. ‘I’m not normally up at this time. Don’t you miss your sleep?’

‘I’ve got insomnia.’ Sparrow made it sound like something you catch.

‘Do you know what Alfie told me this morning?’ said Pamela. ‘“The government should round up all the poor people and put them in camps.” I don’t know where he gets it from. He’s eleven and has the makings of a serial killer.’

‘Do you never read your emails?’ Pamela swung her headlamp over.

‘There’s not much point in being out at this time of year at all,’ said Sparrow.

‘Why not?’ Matilda asked.

‘Hibernation. They spend six months asleep. We might as well be hunting tortoises.’

‘Matilda, you know what I told you about thinking,’ Pamela reminded her. ‘We’ve got a Brandt’s bat. Tiny and very rare. There’s a clump of ash trees just this side of the water. We think it must be in there, but we don’t know for sure.’

‘Just the one?’ asked Matilda.

Pamela rolled her eyes. ‘How do I know? There was a sighting of a Brandt’s in the woodlands just before the ponds, and that’s why we’ve volunteered to search for its little home.’

Matilda persevered. ‘If it’s a single tiny bat, how are we supposed to find its roost?’

‘They’re very distinctive. The whole point of coming this late is to ensure that we don’t disturb its flight pattern,’ Pamela explained as laboriously as possible. ‘I have a diagram.’ She unfolded a sheet of paper with an unedifying sketch at its centre showing a very big tree and a very small hole.

Matilda could remember when there were fifteen women in the group, ambling about in the golden summer dusk, but the bats were fewer now and the volunteer spotters felt they had better things to do than catalogue flying mice.

Christopher Fowler is the acclaimed author of the award-winning Full Dark House and eleven other Peculiar Crimes Unit mysteries: The Water Room, Seventy-Seven Clocks, Ten Second Staircase, White Corridor, The Victoria Vanishes, Bryant & May on the Loose, Bryant & May off the Rails, The Memory of Blood, The Invisible Code, Bryant & May and the Bleeding Heart, and Bryant & May and the Burning Man. In 2015, Fowler won the coveted Crime Writers’ Association Dagger in the Library Award in recognition for his body of work. He lives in London, where he is at work on his next Peculiar Crimes Unit novel, Bryant & May: Strange Tide. 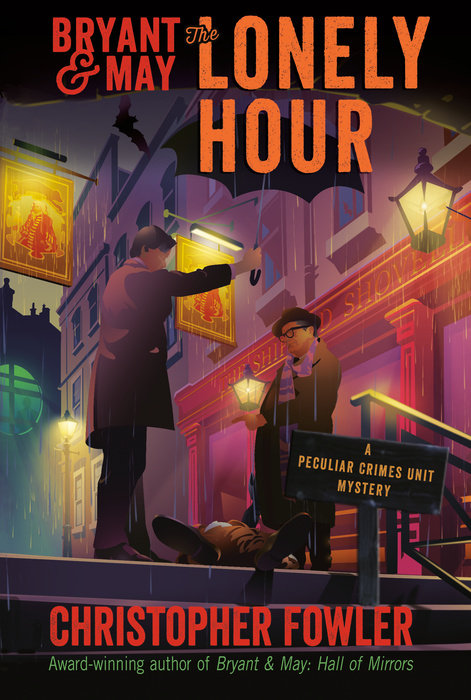