A Memoir of Fumbling Toward Adulthood

From the star of Broadway's The Book of Mormon and HBO's Girls, the heartfelt and hilarious coming-of-age memoir of a Midwestern boy surviving bad auditions, bad relationships, and some really bad highlights as he chases his dreams in New York City

With a new afterword • “Candid, funny, crisp . . . honest and tender about lessons of the heart.”—Vogue

When Andrew Rannells left Nebraska for New York City in 1997, he, like many young hopefuls, saw the city as a chance to break free. To start over. To transform the fiercely ambitious but sexually confused teenager he saw in the mirror into the Broadway leading man of his dreams.

In Too Much Is Not Enough, Rannells takes us on the journey of a twentysomething hungry to experience everything New York has to offer: new friends, wild nights, great art, standing ovations. At the heart of his hunger lies a powerful drive to reconcile the boy he was when he left Omaha with the man he desperately wants to be.

As Rannells fumbles his way towards the Great White Way, he also shares the drama of failed auditions and behind-the-curtain romances, the heartbreak of losing his father at the height of his struggle, and the exhilaration of making his Broadway debut in Hairspray at the age of twenty-six. Along the way, he learns that you never really leave your past—or your family—behind; that the most painful, and perversely motivating, jobs are the ones you almost get; and that sometimes the most memorable nights with friends are marked not by the trendy club you danced at but by the recap over diner food afterward.

Honest and hilarious, Too Much Is Not Enough is an unforgettable look at love, loss, and the powerful forces that determine who we become.

An excerpt from Too Much Is Not Enough

About Andrew Rannells (The Honest Version)

When I have to provide a bio for a Playbill or a television show announcement or the jacket of the book you’re holding in your hand, I’m always struck by how tidy it looks. Each sentence contains an achievement that I’m proud of, something that for years I had only dreamed could be possible. I’ve worked hard, and I’m happy to say that I have achieved much of what I set out to do when I first moved to New York in 1997. (I mean, I would still like to have a weekly brunch date with Stephen Sondheim, but it’s always good to have goals.)

But my biography is also deceiving. It’s all highs and no lows, with bullet points of good stuff and none of the details of the in-between, and it starts with me starring in my third Broadway show, when I was thirty-two. In reality, my bio should include sentences like:

Prior to being cast in The Book of Mormon, Andrew left his family in Omaha, Nebraska, missed them terribly, and often wondered if he had made the right choice to leave his home.

After starring in Hairspray on Broadway as the third Link Larkin, Andrew faced months of unemployment and thought he would never work again. During that time, he loved to stress eat, spiraled into regularly scheduled anxiety attacks, and had to take a job as a temp at Ernst and Young. He still couldn’t tell you what he was supposed to be doing at that job, because he mostly hid in either the men’s bathroom or the break room.

In his free time, Andrew likes to drink wine with friends, watch countless consecutive hours of HGTV, and manage panic about his personal life.

(Just a side note: You know how, at the end of Our Town, the Stage Manager lets Emily go back and pick one day in her life to visit? One of my greatest fears is that this will happen to me when I die and I will accidentally pick a day that I spent alone in my apartment eating large Domino’s pizzas and watching an entire season of Mad Men straight through. Like, all thirteen hours at once. Actually, maybe there’s nothing wrong with that day.)

What these official bios always leave out are the years I had in New York City before I was working on Broadway. Before I was in The Book of Mormon and Girls. Before people started stopping me on the subway to say, “Did we go to high school together?” (Unless you attended an all-boys Jesuit Catholic high school in Omaha, Nebraska, . . . no, we did not.) Or “I love you on Modern Family!” (Actually, that’s Jesse Tyler Ferguson.) Or my all-time favorite, “Tell me why I know you!” (Ma’am, that’s a question only you can answer.)

These missing years were messy and confusing and filled with questionable choices, and for a long time I was happy to omit them. But I realize now just how much happened during that period of my life—a time when I was excited, and terrified, on a daily basis about what the future held for me—and I wanted to tell some stories about experiences that have been just as important as all of those highlights in my bio.

Everyone who leaves home, with dreams of making it in the city, starts somewhere, and I’m pretty sure that my dream began at a young age, when my dad started showing me MGM and Warner Bros. musicals from the forties and fifties. Judy Garland, Betty Grable, Gene Kelly, Dick Haymes. I idolized all of them. My love of older movie musicals led to a love of newer movie musicals like Fame, Little Shop of Horrors, and Grease 2 (I prefer the sequel to the original; I know I’m not alone here).

Because of this love of musicals, my mom suggested I watch the Tony Awards one year. I was instantly hooked. It was so much better than the movies; it was live! I would watch the Tonys every year and dream about being one of those people on the stage performing. It was the 1993 Tony Awards that really sealed the deal. The casts of Kiss of the Spider Woman, Blood Brothers, The Goodbye Girl, and The Who’s Tommy all performed that night, and I fell madly in love with every minute of the telecast. That was the moment I knew that I didn’t want to be just a fan, I wanted to be one of them. I wasn’t sure how I was going to do it, but I knew I had to figure it out. My family, while incredibly supportive, didn’t have the answers, either. I thought I would start with the most obvious first step and just go from there; I had to get myself to New York City.

I see the new kids arriving in the city every year, new faces ready to tackle their dreams, practically shouting, “God, I hope I get it! I hope I get it!” I want to welcome them and tell them what they can expect, what I wish I had known when I first arrived. At the top of that list: It might look like people are ahead of you, be it in money, looks, or opportunity, but here’s what—Eyes on your own paper, folks! Everyone has to do the work. People who just get handed opportunity without the effort usually fuck it up and end up much lower than when they started. Your career is something that starts with the first step, not with a promotion or a movie or an award. It begins the minute you say you are going to do it. So make it all count. I can’t give you a shortcut, because there isn’t one, so the following pages are not a guide to making it in New York. Instead, they are stories of wins, big and small, of falling down but always getting up, and of experiencing everything you possibly can and making a life to be proud of along the way. That’s all a lofty way to say you are about to read about homesickness, bad auditions, good auditions, sex with the wrong person, occasionally sex with the right person (who generally turns out to be the wrong person), some unfortunate but inescapable life events on the path to adulthood, and lots of wine with friends along the way.

If I could squeeze all of these stories into the bio on the jacket of this book, I would. But my editor won’t let me, so please consider this book the longer, more honest version of my bio—the one I’d share with a friend over a few drinks. I should also add that some names and personal details have been changed. I tried to be as accurate as possible, but, let’s be honest, we all know how memory works. For example, as I was writing many of these stories, I imagined myself as a young Leonardo DiCaprio in them, but after consulting some photo albums, I realized that simply wasn’t the case. I hope you enjoy my stories anyway.

Andrew Rannells is an actor, singer, performer, and the author of Too Much Is Not Enough. A Tony, Drama Desk, and Critics Choice Award nominee and Grammy winner, he originated the role of Elder Price in The Book of Mormon and has starred in Hedwig and the Angry Inch, Hamilton, Falsettos, and The Boys in the Band. On the small screen, he has appeared in Girls, The New Normal, Big Mouth, The Knick, The Romanoffs, Black Monday, and Girls5Eva. Rannells's film credits include A Simple Favor, The Intern, Bachelorette, The Boys in the Band, and The Prom. He has published essays in the New York Times and he made his directorial debut adapting one of his own essays for the anthology series “Modern Love.”

A Memoir of Fumbling Toward Adulthood 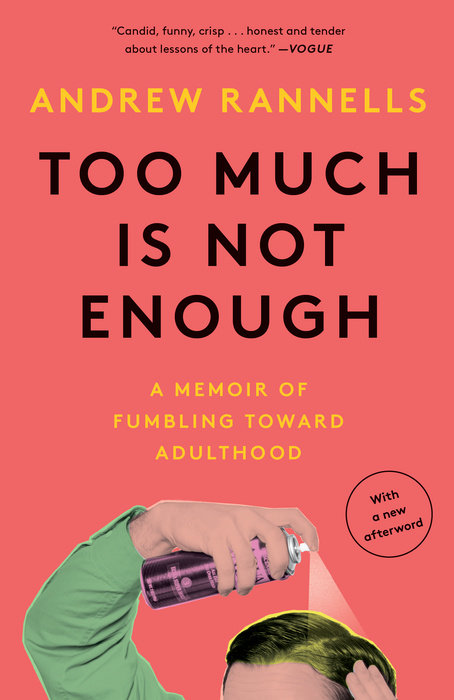