NEW YORK TIMES BESTSELLER • NATIONAL BOOK AWARD LONGLIST • “A feminist jeremiad nested inside a brilliant comic novel—a book that makes you laugh so hard you don’t notice till later that your eyebrows have been singed off.”—Ron Charles, The Washington Post

A finely observed, timely exploration of marriage, divorce, and the bewildering dynamics of ambition from one of the most exciting writers working today

Toby Fleishman thought he knew what to expect when he and his wife of almost fifteen years separated: weekends and every other holiday with the kids, some residual bitterness, the occasional moment of tension in their co-parenting negotiations. He could not have predicted that one day, in the middle of his summer of sexual emancipation, Rachel would just drop their two children off at his place and simply not return. He had been working so hard to find equilibrium in his single life. The winds of his optimism, long dormant, had finally begun to pick up. Now this.

As Toby tries to figure out where Rachel went, all while juggling his patients at the hospital, his never-ending parental duties, and his new app-assisted sexual popularity, his tidy narrative of the spurned husband with the too-ambitious wife is his sole consolation. But if Toby ever wants to truly understand what happened to Rachel and what happened to his marriage, he is going to have to consider that he might not have seen things all that clearly in the first place.

A searing, utterly unvarnished debut, Fleishman Is in Trouble is an insightful, unsettling, often hilarious exploration of a culture trying to navigate the fault lines of an institution that has proven to be worthy of our great wariness and our great hope.

“Blisteringly funny, feverishly smart, heartbreaking, and true, Fleishman Is in Trouble is an essential read for anyone who’s wondered how to navigate loving (and hating) the people we choose.”—Cynthia D’Aprix Sweeney, author of The Nest

“From its opening pages, Fleishman Is in Trouble is shrewdly observed, brimming with wisdom, and utterly of this moment. Not until its explosive final pages are you fully aware of its cunning ferocity. Taffy Brodesser-Akner’s debut is that rare and delicious treat: a page-turner with heft.”—Maria Semple

An excerpt from Fleishman Is in Trouble

Toby Fleishman awoke one morning inside the city he’d lived in all his adult life and which was suddenly somehow now crawling with women who wanted him. Not just any women, but women who were self-actualized and independent and knew what they wanted. Women who weren’t needy or insecure or self-doubting, like the long-ago prospects of his long-gone youth—meaning the women he had thought of as prospects but who had never given him even a first glance. No, these were women who were motivated and available and interesting and interested and exciting and excited. These were women who would not so much wait for you to call them one or two or three socially acceptable days after you met them as much as send you pictures of their genitals the day before. Women who were open-minded and up for anything and vocal about their desires and needs and who used phrases like “put my cards on the table” and “no strings attached” and “I need to be done in ten because I have to pick up Bella from ballet.” Women who would fuck you like they owed you money, was how our friend Seth put it.

Yes, who could have predicted that Toby Fleishman, at the age of forty-one, would find that his phone was aglow from sunup to sundown (in the night the glow was extra bright) with texts that contained G-string and ass cleavage and underboob and sideboob and just straight-up boob and all the parts of a woman he never dared dream he would encounter in a person who was three- dimensional—meaning literally three-dimensional, as in a person who wasn’t on a page or a computer screen. All this, after a youth full of romantic rejection! All this, after putting a lifetime bet on one woman! Who could have predicted this? Who could have predicted that there was such life in him yet?

Still, he told me, it was jarring. Rachel was gone now, and her goneness was so incongruous to what had been his plan. It wasn’t that he still wanted her—he absolutely did not want her. He absolutely did not wish she were still with him. It was that he had spent so long waiting out the fumes of the marriage and busying himself with the paperwork necessary to extricate himself from it—telling the kids, moving out, telling his colleagues—that he had not considered what life might be like on the other side of it. He understood divorce in a macro way, of course. But he had not yet adjusted to it in a micro way, in the other-side-of-the-bed-being-empty way, in the nobody-to-tell-you-were-running-late way, in the you-belong-to-no-one way. How long was it before he could look at the pictures of women on his phone—pictures the women had sent him eagerly and of their own volition—straight on, instead of out of the corner of his eye? Okay, sooner than he thought but not immediately. Certainly not immediately.

But now there was no one to be faithful to. Rachel wasn’t there.

She was not in his bed. She was not in the bathroom, applying liquid eyeliner to the area where her eyelid met her eyelashes with the precision of an arthroscopy robot. She was not at the gym, or coming back from the gym in a less black mood than usual, not by much but a little. She was not up in the middle of the night, complaining about the infinite abyss of her endless insomnia. She was not at Curriculum Night at the kids’ extremely private and yet somehow progressive school on the West Side, sitting in a small chair and listening to the new and greater demands that were being placed on their poor children compared to the prior year. (Though, then again she rarely was. Those nights, like the other nights, she was at work, or at dinner with a client, what she called “pulling her weight” when she was being kind, and what she called “being your cash cow” when she wasn’t.) So no, she was not there. She was in a completely other home, the one that used to be his, too. Every single morning this thought overwhelmed him momentarily; it panicked him, so that the rst thing he thought when he awoke was this: Something is wrong. There is trouble. I am in trouble. It had been he who asked for the divorce, and still: Something is wrong. There is trouble. I am in trouble. Each morning, he shook this off. He reminded himself that this was what was healthy and appropriate and the natural order. She wasn’t supposed to be next to him anymore. She was supposed to be in her separate, nicer home.

But she wasn’t there, either, not on this particular morning. He learned this when he leaned over to his new IKEA nightstand and picked up his phone, whose beating presence he felt even in those few minutes before his eyes officially opened. He had maybe seven or eight texts there, most of them from women who had reached out during the night via his dating app, but his eyes went straight to Rachel’s text, somewhere in the middle. It seemed to give off a different light than the ones that contained body parts and lacy bands of panty; it somehow drew his eyes in a way the others didn’t. At five a.m. she’d written, I’m headed to Kripalu for the weekend; the kids are at your place FYI.

It took two readings to realize what that meant, and Toby, ignoring the erection he’d allowed to  flourish knowing that his phone was rife with new masturbation material, jumped out of bed. He ran into the hallway, and he saw that their two children were in their bedrooms, asleep. FYI the kids were there? FYI? FYI was an afterthought; FYI was supplementary. It wasn’t essential. This information, that his children had been deposited into his home under the cover of darkness during an unscheduled time with the use of a key that had been supplied to Rachel in case of a true and dire emergency, seemed essential.

Taffy Brodesser-Akner is a staff writer for The New York Times Magazine. She has also written for GQ, ESPN the Magazine, and many other publications. Fleishman Is in Trouble is her first novel. 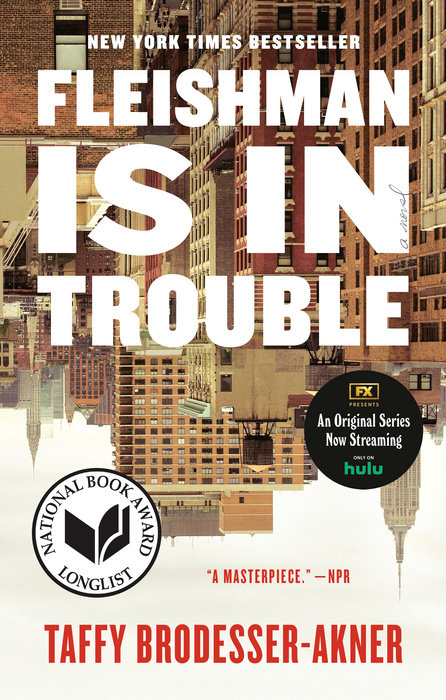