NEW YORK TIMES BESTSELLER • Read with Jenna Book Club Pick as Featured on Today • “Everything a romantic comedy should be: witty, relatable, and a little complicated.”—People

A heartfelt debut about the unlikely relationship between a young woman who’s lost her husband and a major league pitcher who’s lost his game.

NAMED ONE OF THE BEST BOOKS OF THE YEAR BY NPR

In a sleepy seaside town in Maine, recently widowed Eveleth “Evvie” Drake rarely leaves her large, painfully empty house nearly a year after her husband’s death in a car crash. Everyone in town, even her best friend, Andy, thinks grief keeps her locked inside, and Evvie doesn’t correct them.

Meanwhile, in New York City, Dean Tenney, former Major League pitcher and Andy’s childhood best friend, is wrestling with what miserable athletes living out their worst nightmares call the “yips”: he can’t throw straight anymore, and, even worse, he can’t figure out why. As the media storm heats up, an invitation from Andy to stay in Maine seems like the perfect chance to hit the reset button on Dean’s future.

When he moves into an apartment at the back of Evvie’s house, the two make a deal: Dean won’t ask about Evvie’s late husband, and Evvie won’t ask about Dean’s baseball career. Rules, though, have a funny way of being broken—and what starts as an unexpected friendship soon turns into something more. To move forward, Evvie and Dean will have to reckon with their pasts—the friendships they’ve damaged, the secrets they’ve kept—but in life, as in baseball, there’s always a chance—up until the last out.

A joyful, hilarious, and hope-filled debut, Evvie Drake Starts Over will have you cheering for the two most unlikely comebacks of the year—and will leave you wanting more from Linda Holmes.

Praise for Evvie Drake Starts Over

“A quirky, sweet, and splendid story of a woman coming into her own.”—Taylor Jenkins Reid, New York Times bestselling author of Daisy Jones & The Six

“Effortlessly enjoyable . . . [a] pitch-perfect . . . adult love story that is as romantic as it is real.”–USA Today

An excerpt from Evvie Drake Starts Over

Evvie lay awake on the floor in the dark. More specifically, on the floor of the empty little apartment that jutted awkwardly from the back of her house into the yard. She was there because, upstairs in her own bed, she’d had another dream where Tim was still alive.

He was always angry at her for leaving. Do you see what happened? he would say, again and again. He’d felt so close this time that she’d dreamed his cinnamon-­gum breath and the little vein on his forehead, and she was afraid if she turned over and went back to sleep, he’d still be there. So she’d thrown off the blankets and made her way down to the first floor of the house that had always been too big and was much too big now. Descending the wide curved staircase still felt like transgressing, like sneaking down to the front desk of a hotel late at night to ask for extra towels. She’d stopped in the kitchen to put on a pot of water for tea, come directly into the apartment, and stretched out on her back to wait.

When they’d first bought the house—­when he’d first bought the house—­they’d planned to rent out the apartment. But they never got around to it, so Evvie had painted it her favorite shade of peacock blue and used it like a treehouse: KEEP OUT. It was still her favorite place in the house and would remain so, unless Tim’s ghost started haunting it just to say he’d noticed a few little bubbles in the paint, and it would really look better if she did it over.

Nice, she’d thought to herself when that thought first intruded. Welcome to Maine’s most ghoulish comedy club. Here is a little joke about how my husband’s ghost is kind of an asshole. And about how I am a monster.

It was a little after four in the morning. Flat on her back in her T-­shirt and boxers, she took rhythmic breaths, trying to slow the pounding in her temples and belly and wrists. The house felt empty of air and was totally silent except for the clock that had ticked out pick-­a-­pick-­a for thirty-­five years, first in her parents’ kitchen and now in hers. In the dark apartment, she felt so little of anything, except the prickle of the carpet on her skin, that it was like not being anywhere at all. It was like lying directly on top of the earth.

Evvie thought from time to time about moving in here. Someone else could have the house, that big kitchen and the bedrooms upstairs, the carved banister and the slick staircase where she’d once slipped and gotten a deep purple bruise on her hip. She could live here, stretched out on her back in the dark, thinking all her worst thoughts, eating peanut butter sandwiches and listening to the radio like the power was out forever.

The kettle whistled from the kitchen, so she stood and went to turn it off. She took down one of the two public-­radio fundraising mugs from the cabinet, leaving behind the one with the thin coat of dust on its upturned bottom. The tag on her chamomile teabag said, There is no trouble that a good cup of tea can’t solve. It sounded like what a gentleman on Downton Abbey would say right before his wife got an impacted tooth and elegantly perished in bed.

Blowing ripples in her tea, Evvie went into the living room where there was somewhere to sit and curled up on the deep-­green love seat. There was a Sports Illustrated addressed to Tim sticking out of the pile of mail on the coffee table, and she paged through it by the wedge of light from the kitchen: the winding down of baseball season, the gearing up of football season, an update on a college gymnast who was quitting to be a doctor, and a profile of a Yankees pitcher who woke up one day and couldn’t pitch anymore. That last one was under a fat all-­caps headline: “HOW TO BECOME A HEAD CASE.” “Way ahead of you,” she muttered, and stuck the magazine at the bottom of the pile.

Linda Holmes is a novelist, a pop culture correspondent for NPR, and one of the hosts of the popular podcast Pop Culture Happy Hour, which has held sold-out live shows in New York, Los Angeles, Washington, D.C., and elsewhere. She appears regularly on NPR radio shows including Morning Edition, All Things Considered, and Weekend Edition. Before NPR, she wrote for New York magazine online and for TV Guide, as well as for the groundbreaking website Television Without Pity. Her first novel, Evvie Drake Starts Over, was a New York Times bestseller. In her free time, she watches far too many romantic comedies, bakes bread, plays with her wonderful dog, and tries to keep various plants thriving. 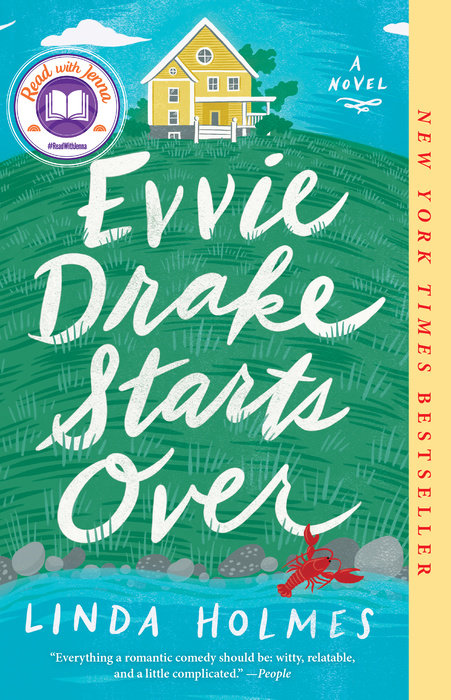