His cover: courthouse janitor. His cause: justice. But when Paul McGrath uncovers a shocking connection to a file of missing evidence, he finds the truth sometimes hits a little too close to home.

An intelligence agent-turned-courthouse janitor, Paul McGrath notices everything and everyone—but no one notices him. It’s the perfect cover for the justice he seeks for both his father and the people who’ve been wronged by a corrupt system. Now he’s discovered a missing file on Alex Pardew—the man who defrauded and likely murdered McGrath’s father but avoided conviction, thanks in large part to the loss of this very file. And what lies behind its disappearance is even worse than McGrath had feared.

Meanwhile, at the courthouse, he stumbles on the case of Len Hendrie, a small businessman who’s been accused of torching a venture capitalist’s mansion. Though Hendrie admits starting the fire, McGrath learns how the VC has preyed on average Joes to benefit himself—and his extensive wine collection. McGrath can’t resist looking deeper into this financial predator and soon finds himself in a gray area between his avenging moral compass and the limits of the law.

Then, just as the Hendrie case is heating up, McGrath receives word of the death of his father’s former housekeeper, sending him back to his family home to confront unfinished business from his past. And he’s about to find some unwelcome truths about the mother he lost as a child—and the father who hid even more secrets than he realized.

An excerpt from Too Close to Home

I’d known Brett Ellison for almost thirty-­three minutes when we reached the service elevator. I’d already seen anger flash across his face. And surprise. And suspicion. But it wasn’t until we stepped out onto the roof—­which was more like stepping out onto the surface of a tiny moon—­that I saw the first trace of fear.

The curved concrete shell was rough underfoot. It had been scoured and bleached by the wind and the sun until it was the texture and color of desiccated ivory, though the weather was playing nice that afternoon. The sky was calm and cloudless. There was no breeze. No birds were in sight. The streets below us were deserted, with the politicians being out of town until the next legislative session began, and the place was silent save for Ellison’s ragged breathing. The sun was low in the sky over my left shoulder, staining the pointed prows of the four neighboring government towers a soft pink, and ahead the Hudson cut a dark diagonal swath through Albany’s eerily empty downtown.

“I don’t get it.” Ellison edged closer to me and grabbed my sleeve. “Why here? What am I supposed to see?”

Ellison had been at his desk when I opened the door to his office, deep in the basement of the adjacent building. He was doing something with his cellphone. He had it at arm’s length, squinting at it like his reading glasses weren’t quite up to their job, and jabbing repeatedly at the screen with a rigid forefinger.

“What the actual . . . ?” His finger froze in midair and he glared up at me over his circular lenses. “Who the hell are you?”

“My name’s Paul.” I walked in, pulled one of his chrome-­framed visitor’s chairs back a couple of feet, and sat down. “I’d say it was a pleasure to be here, but it’s too soon to be sure.”

“Hey!” Ellison jumped up and snatched off his glasses. “I didn’t say you could sit. What the hell do you want? Tell me, or haul your ass out of here, right now.”

“Tell you, or haul my ass out?” I frowned. “I’m curious. Do you get many people showing up unannounced and not telling you what they want? Just hanging around, not saying a word?”

“Did you come here just to annoy me?” Ellison placed his phone facedown on one pile of papers on his desk and threw his glasses onto another. “Or do you have any other purpose in life?”

“To see me?” Ellison ran his fingers through his thin, sandy hair, then reversed the motion to tug his fringe farther down over his forehead. “Why? Do I know you?”

“Not yet.” I conjured up a smile. “But we’re going to change that. Starting now. Because I’m your new partner.”

“Have you been smoking crack?” Ellison gestured toward the portrait of the governor, which was hanging at a slightly crooked angle on the wall behind his desk. “I’m a government official, dumbass. I don’t have any partners. New, or otherwise. I don’t know what kind of wild-­goose chase you’ve been sent on, but—­”

“I’m not talking about your day job, Brett.” His phone started to vibrate, causing it to slide off the stack of papers and spin around on the chipped veneer surface of the desk like a stranded bug. “I’m talking about your other line of work. Your more lucrative one. The one you’ve been running with Marcus the last couple years.”

“You’ve got some wires seriously crossed here, buddy.” Ellison drew himself up a little taller and folded his arms over his chest, wrinkling the fabric of his pin-­striped navy suit coat. “I don’t have another line of work. And I don’t know any Marcus.”

“How many times?” Ellison planted his hands on his desk and leaned forward, revealing a slight gut and bringing it into conflict with the buttons of his neatly pressed white shirt. “I don’t have a partner. I’m not in any business.”

Ellison didn’t respond, so I took a wallet-­sized photograph from my jacket pocket and placed it on a creased manila folder, more or less directly under his nose. I made sure it was facedown. He pretended not to notice. He straightened up. Glared at me. Looked at the wall behind me. Stared at the framed emergency evacuation instructions mounted on the inside of the door. Glanced at the heavy wool overcoat hanging on a bentwood stand in the corner, next to the trash can. Gazed at the coarse brown carpet. Straightened a stack of documents. Hesitated, with his right hand poised in midair. Wrestled with his curiosity for a beat or two longer. And evidently lost, because after another couple of seconds he slowly slid the picture across to his side of the desk. Picked it up. Flipped it over. Studied it for a few seconds. Shrugged. Then let it slip through his fingers and watched as it fluttered down to land on the same pile of papers as his glasses.

“I don’t know her.” Ellison’s voice barely reached me through the stale basement air.

“No.” I retrieved the picture. It was of a woman. A Latina. She was in her mid-­thirties. Smiling. Beautiful. “But you will soon, right? You’re planning to get to know her very well.” I checked my watch. “In less than two hours. At the Renaissance. Room 2440.”

“In return for not reporting her husband to the INS. I believe that was the deal?”

Ellison closed his eyes and rocked back on his heels for a moment. “So. I get it now. You want to be my partner. By which you mean, what? You want to help yourself to heaps of my money? Well, we can talk about that. But let me tell you, before we go any further, there has to be paperwork. NDAs. Watertight ones. With shitloads of penalties for breaching them. Because I’m not admitting to anything. And if I do, when I pay for something to go away, it stays gone away. We’re clear on that?”

I sighed, got up, and started toward the door.

“Wait!” Ellison’s eyes stretched wide. “Where are you going? You haven’t told me how much you want. Give me a chance to negotiate!”

I paused. “First, I don’t negotiate. That just leads to both sides being dissatisfied. Better for one side to be happy. My side, obviously. And second, you don’t get it at all. I’m wasting my time here. I had no idea you were such a wuss. You’re not cut out to be my partner. I expected a man with vision. With ambition. Who was ready to grab a golden opportunity with both hands, not run and hide from shadows. But don’t worry. You’re not the only game in town. I’ll find someone else. Someone with a backbone.”

“I have plenty of backbone!” Ellison was suddenly all puffed up. “And vision. This whole business model was my creation, remember, so don’t—­”

“Business model?” I shook my head. “Let’s not get ahead of ourselves. You skim undocumented workers’ wages and take sexual advantage of their wives. We’re not talking Shark Tank material here, Brett. Which is why I was planning to—­how do you MBA guys put it?—­shift your paradigm. But now I’m not so sure. I’m not convinced you can handle it.”

Ellison snorted. “I saw an opportunity. I took it. That’s who I am. An innovator. An entrepreneur. This operation? It’s just a small part of what I do. And for the record, I can handle anything.” He stuck out his jaw. “Tell me what you have in mind. I’ll evaluate it, and if I think it’ll fly I’ll consider letting you get on board.”

“I don’t think so.” I took another step toward the door. “I don’t like your attitude. Here’s what you should do. Find a replacement for Marcus. Carry on the way you were. Forget about all the extra money we could have made together. And all the extra women I could have sent your way.”

“Marcus retired.” I kept my expression neutral. “On account of the accident he was about to have. Don’t worry. Call him if you want. He’s fine. And he’ll stay that way, as long as he stays retired.”

“OK.” Ellison nodded. “Marcus is out of the picture. He stays out. I get it. See? I can be flexible. I can adapt. I can be a team player. But the question is, can you? Because you know what? There’s something you’re forgetting.”

I raised my eyebrows.

“You want to work in this town, there are wheels that need to be greased. I have the connections. You don’t.”

“You don’t.” Ellison sounded confident. “I’d know. So if you want to succeed here, you need me.”

I let a few seconds tick by. “Or someone like you.”

Andrew Grant is the author of RUN, False Positive, and False Friend. He was born in Birmingham, England. He attended the University of Sheffield, where he studied English literature and drama. He ran a small independent theater company, and subsequently worked in the telecommunications industry for fifteen years. Grant and his wife, the novelist Tasha Alexander, live on a wildlife preserve in Wyoming. 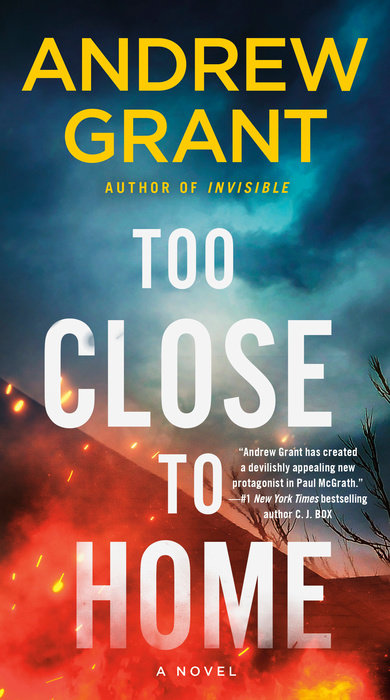