NEW YORK TIMES BESTSELLER • Psychologist Alex Delaware and detective Milo Sturgis search for answers to a brutal, decades-old crime in this electrifying psychological thriller from the master of suspense.

LAPD homicide lieutenant Milo Sturgis is a master detective. He has a near-perfect solve rate and he’s written his own rule book. Some of those successes—the toughest ones—have involved his best friend, the brilliant psychologist Alex Delaware. But Milo doesn’t call Alex in unless cases are “different.”
This murder warrants an immediate call. Milo’s independence has been compromised as never before, as the department pressures him to cater to the demands of a mogul: a hard-to-fathom, megarich young woman who is obsessed with reopening the coldest of cases—the decades-old death of the mother she never knew.

The facts describe a likely loser: a mysterious woman found with a bullet in her head in a torched Cadillac that has overturned on infamously treacherous Mulholland Drive. No physical evidence, no witnesses, no apparent motive. And a slew of detectives have already worked the case and failed. But as Delaware and Sturgis begin digging, the mist begins to lift. Too many coincidences. Facts turn out to be anything but. And as they soon discover, very real threats lurking in the present.

This is Delaware/Sturgis at their best: traversing the beautiful but forbidding place known as Los Angeles and exhuming the past in order to bring a vicious killer to justice.

An excerpt from Serpentine

My best friend, a seasoned homicide detective, is a master of discontent.

Some say Milo Sturgis enjoys the cold comfort of a sour mood.

Grumbling, grimacing, and mumbled curses peak during the muddled middle of murder investigations, when promising leads break their promises. He always gets past it; his solve rate is near-perfect. Which is why his bosses tolerate the biliousness, messages ignored, memos tossed in the trash unread.

I’ve come to think of Milo as allergic to obedience, wonder if it’s rooted in his rookie days when gay cops didn’t “exist” in the department and he had to look over his shoulder and write his own rulebook.

But I could be wrong. Temperament’s a strong factor in determining personality so it could just be the way he is. I wonder what his baby pictures look like. Imagine him as one of those infants who look as though they’ve been weaned on sour pickles.

Like a lot of things, we don’t talk about it.

He doesn’t call me in on all of his cases, just the ones he terms “different” once he’s gotten his bearings. This time, he didn’t wait.

I picked up his phone message when I returned from an eight a.m. run up Beverly Glen. “Misery lusts for company, I’m coming over. If it’s a problem, text me.”

I left the door unlocked and headed for the shower. Before I took two steps, the bell rang.

He’d called from the road.

He barreled through, convex gut leading the way, head lowered, bulky shoulders piled up around his neck like a muscular shawl.

A charging bull if a bull could find an aloha shirt that fit.

He took a moment to stoop and pat the head of my little French bulldog, Blanche, murmured, “At least someone’s smiling,” and continued toward the kitchen.

Blanche cocked her head and looked up at me, expecting clarification. When I shrugged and followed him in, she gave a world-weary sigh and padded along.

Milo’s usual thing is to raid the fridge and assemble snacks worthy of construction permits. This time he filled a coffee cup, sat down heavily at the table, and tugged at the aloha shirt as if aerating his torso. The shirt was sky-blue polyester patterned inexplicably with cellos and bagels. He wore it tucked into baggy khaki cargo pants that puddled over scuffed desert boots.

My true love is a master artisan. She’d designed the kitchen to be sunlit from the south, and this morning’s glow was kind to Milo’s pallid, pockmarked face. But nothing could mask the cherry-sized lumps rolling up and down his jawline.

I filled a mug and settled across from him. “Now I’m scared.”

“Sorry for defying your expectations.” His lips curled but the end product wasn’t a smile. “Maybe I had a big breakfast? Maybe I’m showing discretion?”

“That was a shrink okay if I’ve ever heard one—which is fine, I need therapy.”

He said, “There it is, the old strategic-silence bit . . . ​sorry, I’ll dial it down.” He breathed in and out. Pressed mitt-like palms together. “Namaste or whatever. Glad I caught you.” Sip. “Hoping you’re free today.” Sip. “Are you?”

“Appointments from two to five.”

“That’ll work.” He picked up his cup, put it down. “I plead guilty to acute petulance. But it’s called for.”

“It should be so simple.” Sausage fingers drummed the table. Another long inhale–exhale. “Okay, here’s the deal. Just got a mega-loser shoved in my face like I’m a goddamn rookie. Thirty-six-year-old unsolved. We’re talking freezer burn.”

“No, there’s just this. Listen to the chain of command, Alex. An equally rich buddy of Andrea Bauer—remember her?—sits next to a relative of the victim at a rich persons’ thing. Bauer butts in, she’s connected to the cops, can help. Instead of calling me directly, Bauer contacts a state assemblyman. He hands off to the mayor who can’t even clear the goddamn sidewalks of garbage, couple of cops downtown just got typhus at a homeless encampment.”

He pushed his cup to the side. Lowered a fist to the table but stopped short of contact.

“City’s returning to the Dark Ages but Handsome Jack’s got time to personally contact the chief who punts to Deputy Chief Veronique Martz who calls me yesterday just as I’m about to go off-shift. Important meeting, her office, can’t be handled over the phone. I drive eighty-six minutes downtown, cool my heels in her waiting room for another twenty, finally get ushered into her sanctum for the ninety seconds it takes for her to give me the victim’s name and the basics and warn me not to argue.”

“She didn’t have the goddamn file, locating it is part of my assignment. I asked where the basics came from. She said there a coroner’s summary, I should ask for that, too. I called Bauer to ahem thank her. She’s in Europe.”

Andrea Bauer was the widow of a developer who’d left her a couple hundred million bucks’ worth of real estate. Her home base was an estate in Montecito but she owned board-and-care facilities for mentally challenged adults in several states. Last year one of her charges had been murdered along with five other human victims and two dogs. A week after closing the case, Milo had received a Rolex from Bauer. Against the rules. He’d groused, “Steel, not gold?” and sent it back.

I said, “Maybe you should’ve kept the watch.”

He stared at me. Cracked up. Brought the cup back to arm’s reach and drank.

As he ingested caffeine, his shoulders lowered a bit. Running his hand over his face, he shot up, went to the fridge and pulled out an apple, sat back down and chomped. “Don’t say a thing. This is for the pepsin. Good for digestion.”

I said, “Look at it this way: You’re the A-student who got rewarded with extra homework.”

“You said you wanted therapy. Who’s the victim?”

“Woman named Dorothy Swoboda, all Martz could tell me is she was found shot to death on Mulholland east of Coldwater. Which isn’t even my shop, it’s Hollywood Division. Which I noted to Martz. Only to be ignored. Google gives up nothing on it, only thing I’ve found is in the Times archives. Twenty-four years old, found in her car over the side of a cliff, everything burned up. Nothing in the article about murder, the implication was a one-vehicle accident.”

I said, “Maybe a bullet was found at autopsy and the paper didn’t follow up.”

“That would be par for the course,” he said. “Even back then, you’re not Natalie Wood or O.J. or Baretta, who cares?”

“Swoboda’s daughter, woman named Ellie Barker. Her, Google likes. She made a fortune from exercise wear, sold out a couple years ago for gazillions.”

“Three at the time,” I said. “She probably has no memories of Mommy.”

“Exactly, Alex. This isn’t a police thing, it’s a psych thing, that’s one reason I’d like you along when I talk to her. Maybe you can slide some insight her way and she’ll realize she needs you more than me.” His smile was an off-center crescent. “Think of it as a potential high-end referral, we both come out ahead.”

“What are the other reasons you want me there?”

“Just one,” he said. “Turn on the laser, give me your impression of her, so I know who I’m dealing with. Ultra-rich folk expect the world to spin around them. If she’s unbalanced on top of that, it could get nasty when I fail.”

“I’m being realistic. You know what usually solves the oldies: DNA, bad guy’s in CODIS. Thirty-six-year-old homicide, the body burned to a crisp? What’s the chance any bio-material was there in the first place, let alone collected. This is a woman who can activate politicians with a phone call. I don’t give her what she wants, she’s not gonna be charitable.”

“A woman who lost her mother at three might be more humbled than you think.”

He finished the apple. “You’ve made a new friend without meeting her?”

He got up, tossed the core in the trash. “Fine. I’ll give her a chance. But the case may not give me one.”

“When are you due to meet her?”

“If we leave now, barely enough time to get there.”

Jonathan Kellerman is the #1 New York Times bestselling author of more than forty crime novels, including the Alex Delaware series, The Butcher’s Theater, Billy Straight, The Conspiracy Club, Twisted, True Detectives, and The Murderer’s Daughter. With his wife, bestselling novelist Faye Kellerman, he co-authored Double Homicide and Capital Crimes. With his son, bestselling novelist Jesse Kellerman, he co-authored A Measure of Darkness, Crime Scene, The Golem of Hollywood, and The Golem of Paris. He is also the author of two children’s books and numerous nonfiction works, including Savage Spawn: Reflections on Violent Children and With Strings Attached: The Art and Beauty of Vintage Guitars. He has won the Goldwyn, Edgar, and Anthony awards and the Lifetime Achievement Award from the American Psychological Association, and has been nominated for a Shamus Award. Jonathan and Faye Kellerman live in California and New Mexico. 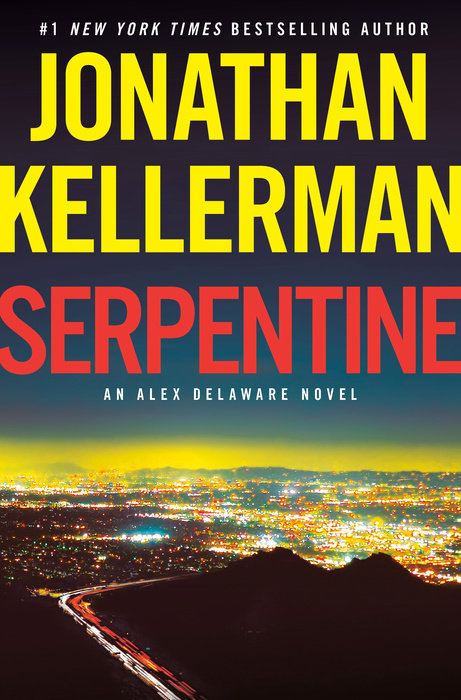