The Reporters Who Took On a World at War

NEW YORK TIMES EDITORS’ CHOICE • A prize-winning historian’s “effervescent” (The New Yorker) account of a close-knit band of wildly famous American reporters who, in the run-up to World War II, took on dictators and rewrote the rules of modern journalism

ONE OF THE BEST BOOKS OF THE YEAR: The New Yorker, Vanity Fair, NPR, BookPage, Booklist

They were an astonishing group: glamorous, gutsy, and irreverent to the bone. As cub reporters in the 1920s, they roamed across a war-ravaged world, sometimes perched atop mules on wooden saddles, sometimes gliding through countries in the splendor of a first-class sleeper car. While empires collapsed and fledgling democracies faltered, they chased deposed empresses, international financiers, and Balkan gun-runners, and then knocked back doubles late into the night.

Last Call at the Hotel Imperial is the extraordinary story of John Gunther, H. R. Knickerbocker, Vincent Sheean, and Dorothy Thompson. In those tumultuous years, they landed exclusive interviews with Hitler and Mussolini, Nehru and Gandhi, and helped shape what Americans knew about the world. Alongside these backstage glimpses into the halls of power, they left another equally incredible set of records. Living in the heady afterglow of Freud, they subjected themselves to frank, critical scrutiny and argued about love, war, sex, death, and everything in between.

Plunged into successive global crises, Gunther, Knickerbocker, Sheean, and Thompson could no longer separate themselves from the turmoil that surrounded them. To tell that story, they broke long-standing taboos. From their circle came not just the first modern account of illness in Gunther’s Death Be Not Proud—a memoir about his son’s death from cancer—but the first no-holds-barred chronicle of a marriage: Sheean’s Dorothy and Red, about Thompson’s fractious relationship with Sinclair Lewis.

Told with the immediacy of a conversation overheard, this revelatory book captures how the global upheavals of the twentieth century felt up close.

An excerpt from Last Call at the Hotel Imperial

The Nazi spies were watching from the shore as the passengers boarded the Dutch liner in Southampton, England, bound for New York. The war was a few weeks old, and every transatlantic ship was full. England would be bombed from the air—that was a certainty. Prepare for poison gas attacks, the British government had instructed its populace. To accommodate the crowds scrambling for berths, the ship’s crew had set up cots in the gymnasium and filled the Delft-tiled swimming pool with makeshift bunks.

At the harbor, newly minted security officials, zealous in their duties, were screening every traveler. Overzealous, judged some of the passengers, especially the well-heeled ones, as the guards picked through their valises and badgered them with questions about their plans abroad and their acquaintances in America. The security officials had been warned about smugglers and saboteurs trying to get on board. At this rate, it would be hours before all the passengers had made their way through the long lines onto the ship.

The name of the boat, the Nieuw Amsterdam, was painted on the side of the hull in huge white letters. The Dutch, for now, were still a neutral power. Would it be enough to dissuade a trigger-happy German U-boat commander? That was the subject—to be joked or fretted about, according to one’s disposition—as the first-class passengers settled into the smoking room to calm their nerves.

On its maiden transatlantic crossing the previous year, the Holland-America Line had boasted that its new flagship was a “Ship of Peace,” built with luxury—not conversion to military use—in mind. The irony was already apparent well before the Nieuw Amsterdam left Rotterdam. In March 1938, the Third Reich’s soldiers had marched over the Austrian border. In Munich six months later, the British prime minister, Neville Chamberlain, sacrificed the Czechs to Hitler in the name of “peace for our time.” When it came to wishful thinking, the directors of the Holland-America Line had plenty of company. That included many of the ship’s American passengers, who had nonchalantly dismissed the war clouds, departing their homes in Cleveland and Rochester for business trips that summer to Frankfurt or London, jaunting to Florence to see the Old Masters or to Salzburg for the music.

The Nazi spies kept an eye on the passengers in line. The shabby ones traveling third class were mostly Jews—merchants from Odessa or Warsaw who’d paid for their family’s passage to New York with pieces of jewelry or cash smuggled out in the lining of their coats or the hems of wives’ dresses. There were illustrious personages waiting to board, too, the sort whom the Holland-America Line’s directors had envisioned when they outfitted the boat with a full-sized air-conditioned theater, satinwood dining chairs, and gold-leafed ceilings hung with Murano chandeliers. The son of the Chinese leader Chiang Kai-shek was sailing on the Nieuw Amsterdam. So, too, was the eighty-two-year-old widow of steel tycoon Andrew Carnegie. Winston Churchill’s confidant, Conservative Party politician Sir Ronald Tree, was aboard. He’d been dispatched to America to shore up the British propaganda effort. And there was Hollywood royalty in the person of the actress Merle Oberon, who’d dazzled that year as the tormented heroine of Wuthering Heights.

Still more famous, though, were the two men whom the Nazi spies were tailing. Their bylines had appeared all around the globe, reporting on bank collapses, peace conferences, uprisings, assassinations. Their voices were familiar from newsreels and radio. Between them, they’d interviewed Mussolini, Gandhi, Nehru, and Hitler. They had tête-à-têtes with FDR at the White House, shared cigars with Churchill, and traveled on a paddleboat from Constantinople to the island of Prinkipo for an audience with Leon Trotsky, the exiled prophet of worldwide revolution. Their predictions headlined newsreels and their exploits were written up in the gossip columns. “Knights-errant of our time, rescuers of nations in distress, Champions of the downtrodden and oppressed,” groused one envious English reporter.

The Nazis already had thick files on both men. John Gunther was thirty-eight years old, tall, and well-built, with deep-set blue eyes, blond hair, and a high forehead. A few years earlier, he’d written the sort of book that, like Hemingway’s The Sun Also Rises, made a young man’s future, not least because of the scandal it caused. Published in 1936, Inside Europe was a daringly frank account of the doings in the Continent’s chancelleries and palaces. With dash and insight, Gunther had drawn an acid portrait of the dipsomaniacs and neurotics who were driving the Continent full throttle toward catastrophe, and the septuagenarians who were trying, impotently, to avert the crash. He’d done more than any other reporter to raise the alarm about the European crisis. The book was banned in Germany, a fact that Gunther’s publishers elsewhere played up in their advertising. It sold a million copies worldwide.

The spies’ real quarry, though, was Gunther’s traveling companion, H. R. Knickerbocker—Knick to his friends. Red-haired and wiry, Knick had shot out of Yoakum, Texas, snapping at facts like a terrier, to win the Pulitzer Prize for his reporting on Stalin’s first Five-Year Plan. On the eve of the war, he was, at forty-one, reportedly one of the best-paid correspondents in the world. He was always rushing, Hermes featherweight typewriter in hand, to the places other people were fleeing. Was it true that the great H. R. Knickerbocker was on the train? a Jewish passenger on the Vienna-bound service had inquired just before Nazi tanks rolled into Austria. “With the foreign press here they won’t dare to do anything wrong, will they? Will they?” the man pleaded.

Neither Knick’s fame nor his passport could insulate him from what was coming. A few days before boarding the Nieuw Amster­ dam, Knick had led the biggest scoop of his career. Now Hitler’s propaganda minister, Joseph Goebbels, was baying for his blood.


“We were scavengers, buzzards, out to get the news, no matter whose wings got clipped,” John Gunther wrote years later of his world-famous coterie of American correspondents. In the 1920s and 1930s, millions of Americans got their foreign news from a very small number of international reporters. Among them were John’s closest friends: Knick, Vincent (Jimmy) Sheean, and Dorothy Thompson.

Jimmy and Dorothy, like John and Knick, had arrived in Europe in the early 1920s as young reporters, just as the dust of the Great War was settling. Sent by their editors to Bucharest, Prague, and Vienna, they saw—more clearly than most—the practical failings of the peace treaty signed at Versailles in 1919. The new democracies created from the shards of defeated empires were frail things, their economies shattered, their politics riven. Lacking tidy ethnic frontiers, the states midwifed at the Paris Peace Conference proved no match for the nationalist passions incubating within their borders.

At first, the reporters had cracked jokes, as everyone did, about the strongmen rising in Italy and Germany and across east-central Europe: Mussolini posturing under a steel helmet, on a horse, striding atop a cannon. Hitler strutting and bellowing and a whole battalion of little Hitlers in lockstep behind him. But it didn’t take long before they realized how close these gangsters were to taking power. As Americans, they had imagined that people wanted freedom: that the whole thrust of human history, in fact, was toward liberty. But what if the leaders people freely chose were dictators rather than democrats?

As irrationality replaced progress as the leitmotif of the era, the ideas about unconscious drives that Sigmund Freud had developed in prewar Vienna gained new currency. At bohemian dinner parties in Greenwich Village or Chicago’s Towertown, all the talk was of complexes and repression, of neuroses to which sexual liberation provided the cure. Americans were particularly enthusiastic about psychoanalysis, though Freud complained that they made a “hodge podge” of his theories. The self was becoming the new frontier of human experience and explaining the world required looking inward as well as out.

In the interwar years, American foreign correspondents became the kings of the hill. Shouting questions in ministerial briefing rooms, bragging in bars, they comprised the largest contingent of foreign reporters in most world capitals. Their outsize role doesn’t accord with the old stereotype of an isolationist United States, barricaded behind its oceans. However, it helps to explain the monumental turnabout in the 1940s, when the United States went from hemispheric power to global hegemon.

Decades before American military bases dotted the globe, the correspondents saw the world as a whole: Europe, Asia, and the United States, colliding at warp speed. Armed with a peculiarly American obsession with personalities, they sounded an early warning about the rise of the dictators. At a time when appeasement and isolationism held sway, theirs were the voices prophesying the Second World War, garnering audiences in the millions for their efforts. The storm, they said, was just over the horizon. It was high time for Americans to engage with foreign affairs.

Deborah Cohen is the author of The War Come Home, Household Gods, and Family Secrets. She is also the Peter B. Ritzma Professor of Humanities and Professor of History at Northwestern University, focusing on modern Europe.

The Reporters Who Took On a World at War 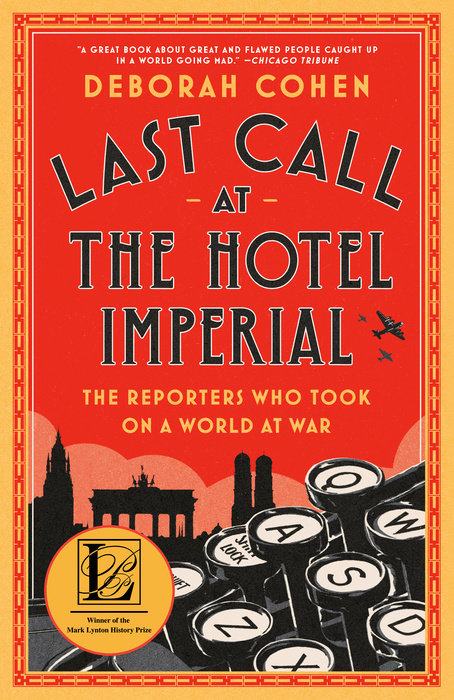