NATIONAL BESTSELLER • A dazzling epic of betrayal, love, and fate that spans five generations of an Indigenous Chicano family in the American West, from the author of the National Book Award finalist Sabrina & Corina

A Phenomenal Book Club Pick • “Sometimes you just step into a book and let it wash over you, like you’re swimming under a big, sparkling night sky.”—Celeste Ng, author of Little Fires Everywhere and Everything I Never Told You

ONE OF THE MOST ANTICIPATED BOOKS OF 2022—The Millions, Electric Lit, Lit Hub, Book Riot

There is one every generation, a seer who keeps the stories.

Luz “Little Light” Lopez, a tea leaf reader and laundress, is left to fend for herself after her older brother, Diego, a snake charmer and factory worker, is run out of town by a violent white mob. As Luz navigates 1930s Denver, she begins to have visions that transport her to her Indigenous homeland in the nearby Lost Territory. Luz recollects her ancestors’ origins, how her family flourished, and how they were threatened. She bears witness to the sinister forces that have devastated her people and their homelands for generations. In the end, it is up to Luz to save her family stories from disappearing into oblivion.

Written in Kali Fajardo-Anstine’s singular voice, the wildly entertaining and complex lives of the Lopez family fill the pages of this multigenerational western saga. Woman of Light is a transfixing novel about survival, family secrets, and love—filled with an unforgettable cast of characters, all of whom are just as special, memorable, and complicated as our beloved heroine, Luz.

An excerpt from Woman of Light

Luz Lopez sat with her auntie Maria Josie near the banks where the creek and the river met, the city’s liquid center illuminated in green and blue lights, a Ferris wheel churning above them. The crowds of Denver’s chile harvest festival walked the bottomlands with their faces hidden behind masks of turkey legs and bundles of buttered corn. The dusk air smelled of horse manure and gear grease and the sweet sting of green chilies roasting in metal drums. Through the smog of sawdust and food smoke, Luz was brightened by the flame of her kerosene burner, black hair curled around her noteworthy face, dark eyes staring into a porcelain cup. She wore a brown satin dress dulled from many washes—but still she shined.

“Tell me,” said an old man in Spanish, fiddling with the white-brimmed Stetson across his lap. His eyes murky, faraway. “I can take it.”

Luz searched inside the cup, tea leaves at the bottom. Along the edges, she saw a pig’s snout, and deeper into the mug, far into the future, she glimpsed a running wolf. Luz placed the cup on the velvet cloth over her booth’s wide table, which was really an old Spanish door, the rusted knob exposed like a pointed thorn.

The old man lifted his hat to his sweat-salted head. “The goddamn beans, the lard Ma uses.”

“Can’t always blame a woman,” Maria Josie interrupted with reserved confidence. She was thickset with deep brown hair cut close to her face, and she wore workmen’s trousers and a heathery flannel with wide chest pockets, her dark eyes peering through round glasses. She told the old man that almost no one she knew could afford lard anymore. “Especially not in an abundance, señor.”

“You’ll have to give it up,” Luz said sweetly. “For your health, more time at life.”

The old man swore and tossed a nickel into Luz’s tackle box, leaving the booth with the hunkered posture of a man bickering with himself.

It was an annual festival, a grouping of white tents and a lighted main stage. Denver’s skyline around them, pointed and gray, a city canyon beneath the moon. Rail yards and coal smelters coughed exhaust, their soot raining into the South Platte River. Young people had unlaced their boots and removed their stockings, wading into the moon’s reflection. Bats swooped low and quick.

“Can I interest you ladies in a reading?” Luz asked. Two younger girls had slowed their pace, dissolving cotton candy onto their tongues. They gawked at Luz’s teakettle and leaves, her tackle box of coins.

The taller of the two girls said, “Bruja stuff?”

The shorter one giggled through blue teeth and licked the last of her candy. “We don’t mess around with that,” she said and reached across the booth. She pushed aside a mossy stone, snatching one of Diego’s handbills. The girls locked arms and skipped down the aisle between tents, bouncing to the main stage where the Greeks were hosting their annual contest, “Win Your Woman’s Weight in Flour.”

Maria Josie whispered, “The young ones are no good.”

Luz asked why, said at least she was trying.

“Focus on the viejos—they’re steady.”

“Sure they are,” Luz said. “Until Doña Sebastiana comes.”

Onstage, Pete Tikas was at the microphone in a maroon suit with a red carnation pinned to his lapel. “Calling all homegrown Denver gals,” he shouted, tapping the platform with his wooden cane, the sound booming. He owned the Tikas Market, and folks from all over, nearly every neighborhood, called him Papa Tikas. They brought him gifts from their gardens—rosemary and cilantro, bootleg mezcal. They named their babies Pete and carried them into the market, wrapped in white blankets. While many Anglo-owned stores turned them away, Papa Tikas welcomed all. Money is money, was his motto, though it went beyond that. He cared about his city, about the people his store fed.

“I kinda like these big ol’ gals,” said Maria Josie, motioning through the night toward the main stage. “Maybe we’ll get customers from all this ruckus.”

Luz and her older brother, Diego, had lived with their auntie for nearly a decade. When Luz was eight years old, her mother, Sara, decided she could no longer care for her children, sending them north to live with her younger sister, Maria Josie, in the city. Whenever Luz thought of her mother, she felt like a stone was lodged into her throat, and so she didn’t think of her often.

Maria Josie flashed an ornery smile. She had an elegant gap between her front teeth. “Hell, some of those girls are pretty cute.” She pointed to the dozen or so women ascending the stage. Tall ones. Short ones. Those with the heft of their railroad worker men. Big-boned gals from the Martinez clan who didn’t have a chance against the chubby Gallegos. Pick us. Weigh me. I’m the winner, winner.

The first woman took to the scale and Papa Tikas hollered, “One ninety! You can do better, ladies.” A regal woman in an orange shawl was next. She had a dazed look, as if she’d walked into her own birthday party expecting a wake. The crowd trembled with applause.

Maria Josie shook her head and pushed back in her chair, the front two legs lifting from the silty earth. She motioned with a kissy mouth to the bleachers, stage left, where Diego twirled beneath the metal slits in barred light. “Look at that boy now,” she said.

He was on in twenty minutes. Dirt coughed beneath his feet, his mouth as open as a third eye socket. He moved in patterned steps, a dancer beating an invisible flame. Although she couldn’t make them out through the harvest light, Luz knew that her brother’s snakes, Reina and Corporal, were nearby in their wicker basket. The breezeless weather was good for a festival, even better for the snakes. Within a month, Reina and Corporal, six-foot-long rattlers, would curl beneath a heat lamp in Diego’s bedroom. They could die if left under an open window, a wintry draft freezing their bodies in an instant. Cold-blooded, Luz had learned, meant something.

“If I told you I killed it myself, would you believe it?” It was Lizette, who had approached the booth in a secondhand fur coat, rabbit or fox, most likely stolen or pawned by her fiancé, Alfonso. “Real eye-catching, huh?”

Maria Josie slammed her chair back onto four legs. She leaned over the booth, rubbing with her index finger and thumb at Lizette’s disintegrating jacket. Flecks of powdery fur floated in the dark. “Skinned it yourself, too?”

Lizette frowned and flicked her right hand, as though she smoked a cigarette that didn’t exist. She plopped down in the chair across from Luz, sliding open her green mermaid clutch, rows of loosened beads across the siren’s face. “Read for me, prima? Same as usual,” she said, “but more on Al. I think he’s cheating. That son of a bitch.”

“Only a fool would do such a thing,” said Maria Josie sarcastically. “Unimaginable.”

Lizette blushed. Her ridged cheekbones gave her an ornamental look, and her eyes were a galaxy of greens and golds and black. The cousins had been inseparable since Luz first arrived in Denver. “Thank you, Tía,” said Lizette.

Luz reached for her brass kettle, the water kept at a low boil over the kerosene burner, her fingers scented with fuel. She lifted the kettle and poured tea into a white cup. It was always the same when she read for Lizette. Usually she saw a doll and a rattle, and in recent years, as her sight grew stronger, Luz glimpsed a sunny apartment with a yellow kitchen, white French doors, brick walls.

“Think of your question,” said Luz, handing the cup to Lizette. “Don’t get sidetracked like usual.”

Lizette held the cup to her mouth, puffed as if blowing out birthday candles. “Me?”

Lizette stared coolly at Maria Josie before finishing her tea and handing the cup to Luz. “What’s the damage?”

Delicately, Luz placed the cup brim down, draining leftover tea on a cloth napkin, the brown water bleeding onto the fabric. She turned the cup counterclockwise three times before flipping it over and gazing inside, the leaves darkly drenched like ground liver. A star, a boot, stray images along the ridge. Luz focused until the symbols blurred, giving way to another view, a moment caught like trout from a river. Black hair rising and falling over white sheets, Lizette’s curls perfumed with rose water. A long, airy moan. Teeth against floral pillows, a curved toe hitting a metal bed frame. Luz closed her eyes, she turned away from the cup.

“Wow, Lizette,” Luz said, flatly. “You aren’t even married yet.”

Kali Fajardo-Anstine is the author of Sabrina & Corina, a finalist for the National Book Award, the PEN/Bingham Prize, The Story Prize, and winner of an American Book Award. She is the 2021 recipient of the Metcalf Award from the American Academy of Arts and Letters. Her work has been honored with the Denver Mayor’s Award for Global Impact in the Arts and the Mountains and Plains Independent Booksellers Association Reading the West Award. She has written for The New York Times, Harper’s Bazaar, ELLE, The American Scholar, Boston Review, and elsewhere, and has received fellowships from MacDowell, Yaddo, Hedgebrook, and Tin House. Fajardo-Anstine earned her MFA from the University of Wyoming and has lived across the country, from Durango, Colorado, to Key West, Florida. She is the 2022/2023 Endowed Chair of Creative Writing at Texas State University. She is from Denver, Colorado. 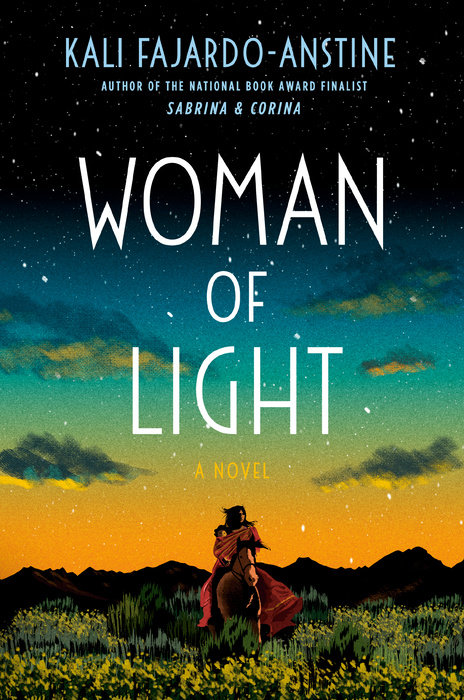