Follow the eccentric, cantankerous, utterly charming Professor Chandra as he tries to answer the biggest question of all: What makes us happy?

“Searingly funny, uplifting, and wonderful . . . Professor Chandra is as unbending a curmudgeon as one could wish to find scowling from the pages of a novel.”—Helen Simonson, New York Times bestselling author of Major Pettigrew’s Last Stand and The Summer Before the War

Professor Chandra is an internationally renowned economist, divorced father of three (quite frankly baffling) children, recent victim of a bicycle hit-and-run—but so much more than the sum of his parts.

In the moments after the accident, Professor Chandra doesn’t see his life flash before his eyes but his life’s work. He’s just narrowly missed the Nobel Prize (again), and even though he knows he should get straight back to his pie charts, his doctor has other ideas.

All this work. All this success. All this stress. It’s killing him. He needs to take a break, start enjoying himself. In short, says his doctor, he should follow his bliss. Professor Chandra doesn’t know it yet, but he’s about to embark on the journey of a lifetime.

“Professor Chandra is a wonderful character—stodgy, flawed, contentious, contemptuous—yet vulnerable, insecure, lonely, repentant, and ridiculous enough to win our sympathy. . . . In the end, Balasubramanyam’s novel is a sort of Christmas Carol for a new age.”—NPR

“Impressively, Balasubramanyam . . . balances satire and self-enlightenment [in] a surprisingly soulful family tale that echoes Jonathan Franzen’s The Corrections in its witty exploration of three children trying to free themselves from the influence of their parents.”—The Guardian

“Funny from start to finish . . . Spending time with Professor Chandra feels like you’ve been in therapy, in a good way.”—Irish Times

An excerpt from Professor Chandra Follows His Bliss

It should have been the greatest day of his life. His youngest daughter, Jasmine, had flown from Colorado to share in his triumph. There had been pieces in the Financial Times and the Wall Street Journal which were all but premature celebrations: “Like Usain Bolt in the hundred,” the former read, “like Mrs. Clinton in November, this is one front-runner who cannot lose.” The Academy were famous for their secrecy, their cloak-and-dagger strategies to stave off leaks, but this time even the bookies agreed—the Nobel Prize in Economics 2016 belonged to Professor Chandra.

He did not sleep that night, only lay in bed imagining how he would celebrate. There would be interviews, of course, CNN, BBC, Sky, after which he would take Jasmine out for an early brunch before her flight, perhaps allowing her a glass or two of champagne. By evening the college would have organized a function somewhere in Cambridge. His competitors would be there, all the naysayers and back­stabbers and mediocrities, but Chandra would be magnanimous. He would explain how the million-dollar check and the banquet in December with the King of Sweden meant nothing to him. His real joy lay in being able to repay the faith shown by his departed parents, trusted colleagues, and his old mentor, Milton Friedman, who had once helped him change his tire in the snow in the days when Chandra was still a lowly Associate Professor.

By midmorning he had rehearsed his victory speech a dozen times. Still in his dressing gown, he brought a cup of coffee to his bedroom and placed it by the telephone before stretching out on the bed, his hands behind his head, in anticipation of the call. An hour later his daughter entered to find him snoring on top of the covers.

Chandra did not move. He had waited so long for this, ­suffered through so much; his BA at Hyderabad, his PhD at Cambridge, his first job at the LSE, that punishing decade at Chicago and, after his return to Cambridge, the crash of 2008, the instant vilification of his tribe, the doubts, the pies in face, and every year afterward the knowledge that though his name had been on the committee’s longlist in April and their shortlist in the summer, that 18-carat-gold medal had still ended up in someone else’s fist. This was the year his ordeal was supposed to end, the year that should have made it all worthwhile.

“And who, may I ask, was the lucky recipient this time?”

“There were two of them,” said Jasmine.

Chandra jerked his body erect, shoved two pillows behind his back, his reading glasses onto his nose.

Chandra groaned. “Not Hart and Holmström?”

“So who will it be next year? Starsky and Hutch?”

“Well, that’s that, then,” he said, pulling the covers over his body and realizing that, were it not for his daughter, he would probably remain in that position until next year.

Ten minutes later Jasmine returned to tell him that a group of journalists were outside the house. Chandra met them, still in his dressing gown, and politely answered their questions. It was his daughter’s idea to invite them in for coffee, which meant he ended up sitting at his kitchen table with four members of the local press: one from the Grantchester Gazette, one from the Anglia Post, and two from the Cambs Times.

“We’re so sorry, sir,” said a young woman from the Gazette, who appeared close to tears.

“It was yours,” said the man from the Times, who smelled of gin. “We were hoping for a fine party tonight.”

“Oh, de rien, de rien,” he said, wishing he could stop speaking French, a language he had no knowledge of at all. “Laissez-faire.”

Before the journalists left he assured them he was delighted for the winners and was glad it was all over and was looking forward to seeing them again next year. His performance fooled everyone except for Jasmine who for the rest of the morning repeated the same sentence with a seventeen-year-old’s mercilessness, asking, “Are you all right, Dad? Are you all right?” keeping at it no matter what he said until finally, on the way to the airport, he lost his temper and shouted, “Can’t you see I’m fine?”

In the past he would have assumed Jasmine’s inquisition was motivated only by sweetness and concern, but now Chandra was convinced there was malice involved, that Jasmine had finally entered into the family tradition of torturing the patriarch, if this was what he still was, for she was a teenager now and lived with her mother in Boulder who blamed him not only for the divorce, three years old now, but also for the rise of Ebola and Boko Haram.

As soon as he reached home the phone began to ring with a stream of condolence calls that continued throughout the day and then, more sporadically, for the rest of the week. For the following month people he barely knew stopped him in the street to offer their sympathies, men and women who couldn’t have named three economists had their lives depended on it.

By November the hysteria had died down, replaced by horror at the U.S. election, and it was then that Chandra realized, in all probability, he would never win the prize now. The odds had gone down a decade before when the Bengali had worked his unctuous charm, but even if time enough elapsed for ­another Indian to win, the field had changed. For years eco­nomists had wantonly obscured their profession, rendering everything absurdly technical with incompressible logarithms such that they were treated more like mystic seers than social scientists. Economics was little more than a poor man’s ­mathematics now, but Chandra still struggled with calculus, ­considering it beneath him, a task for a penniless research assistant.

In any case, his slide to the right was hardly something the Scandinavians were likely to reward; that sub-subcontinent of mediocrity would consider it a signal of intellectual and moral deviance. It was what Chandra loathed most about liberals—their shameless self-righteousness, as if the species’ failings were always someone else’s fault, while anything they did, murder and arson included, were heroic acts in the service of liberty and justice. In point of fact, the Swedes weren’t even liberals. They were neutrals, abstainers who behaved as if they had deliberately chosen not to become a superpower in the interests of preserving their objectivity.

Chandra wished he had just one Swedish student he could torment mercilessly, but the closest thing was a Dutch girl with an American accent who was, regrettably, quite bright. And so he went on giving his lectures and affecting the appearance of a man too wrapped up in his own research to notice that such a petty and trivial thing as the Nobel Prize even existed.

Rajeev Balasubramanyam was born in Lancashire and studied at Oxford, Cambridge, and Lancaster universities. He is the prize-winning author of In Beautiful Disguises. He has lived in London, Manchester, Suffolk, Kathmandu, and Hong Kong, where he was a Research Scholar in the Society of Scholars at Hong Kong University. He was a fellow of the Hemera Foundation, for writers with a meditation practice, and has been writer-in-residence at Crestone Zen Mountain Center and the Zen Center of New York City. His journalism and short fiction have appeared in The Washington Post, The Economist, New Statesman, London Review of Books, The Paris Review, McSweeney’s, and many others. He currently lives and works in Berlin. 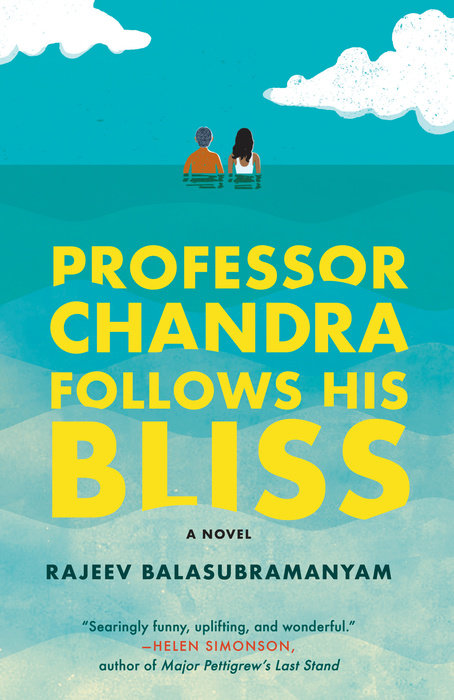