A New Spirituality for Today

A leading minister offers an inspiring guide to living a meaningful life by embracing the power of gratitude.

“Galen Guengerich’s wise and tender words about belonging, connection, and gratitudeare like keys to unlock our hearts, give us courage, and call us into the kind ofrelationships and community we are all longing for.”—Elizabeth Lesser, bestselling author of Broken Open

Galen Guengerich, the charismatic, brilliant leader of one of the nation’s most prominent Unitarian Universalist congregations, All Souls in New York City, shares with readers his wisdom on how to lead a purposeful and joyful life through the practice of gratitude. When Guengerich was in his midtwenties, he left the Conservative Mennonite Church, the faith of his upbringing. The prospect of venturing out on his own was daunting, but he needed to find the way of life that was right for him.

For Guengerich, transcendence is not limited to experiences of the divine; it can also be reached through gratitude’s ability to take us beyond ourselves and create connection to others and the universe. Through his personal story, poems that resonate with his spiritual message, and guided spiritual practice, including “gratitude goals,” this book helps readers discover how the way of gratitude can make them happier and healthier, and provide a new sense of belonging, not only to the universe as a whole but also to themselves.

An excerpt from The Way of Gratitude

What’s madness but nobility of soul

At odds with circumstance? The day’s on fire!

I know the purity of pure despair,

My shadow pinned against a sweating wall.

That place among the rocks—is it a cave,

Or winding path? The edge is what I have.


Some years ago, my wife, Holly, and I made an overnight trip from Manhattan to Lancaster County, Pennsylvania. I had lived in the Lancaster area for a number of years beginning in my midteens, and eventually I had gone to college at Franklin & Marshall, where I majored in classics. Holly and I were on our way to attend a retirement party for the Latin professor who had chaired the classics department.

En route, as we meandered through lush Amish and Mennonite farms east of Lancaster, we passed a small Mennonite church out in the country. As we passed the church, Holly noticed that I had grown quiet, then pensive.

“How do you feel about being here?” she asked. She knew that one of my uncles had once served that congregation as its pastor, and during my early twenties, I had been a youth minister there for a few years and then acting pastor for a short time. After a long pause, I replied, “Ambivalent. On the one hand, I feel claustrophobic—like I can’t breathe. On the other hand, this is the mine where my gold came from.”

When I was in my midtwenties, I left the Conservative Mennonite Church, the faith of my upbringing. It is the most difficult thing I have ever done.

Like their better-known Amish offshoots, the Conservative Mennonites of my childhood followed a simple and relatively austere way of life. We drove cars, but didn’t watch television. We dressed plainly and unfashionably—two decades behind the times, not a century behind like the Amish, who don’t use buttons, zippers, or synthetic fabrics. We attended church three times a week, singing hymns without musical accompaniment. The use of instruments might lead to dancing, which was “worldly” and therefore sinful. In that era, Conservative Mennonites didn’t vote or otherwise become politically involved. In the language of the tradition, we were called to be “the quiet in the land,” following the self-effacing example of Jesus in this life, even as we looked forward to extravagant rewards for our faithfulness in the next one.

Over the centuries, Mennonites developed their intentionally unobtrusive way of life because they often encountered withering persecution for their faith, especially for their steadfast commitment to pacifism and their belief that members should be baptized only as assenting adults, not as passive infants. This practice of baptizing people as adults, historically known as Anabaptism, was a capital crime (punishable by death) in parts of Europe during the late sixteenth and early seventeenth centuries. The Mennonites defended themselves against persecution by developing close-knit communities within cloistered environments. They kept quiet and kept to themselves. In the farming community where I grew up in central Delaware, virtually everyone was Mennonite—and many were related to me.

My father is a Mennonite minister, as was my maternal grandfather, along with seven of my eleven uncles and a dozen or so of my first cousins or their spouses. By the time I left the Mennonite church, I had spent several years in seminary preparing to be a Mennonite minister. When people ask me what I do for a living, I sometimes say that I’m in the family business. Except that I’m not.

Why did I leave? It wasn’t because I took issue with people who strive to live simply and peacefully. Even today, as I look around at the many calamities in our world, I can confidently assert that the Mennonite way of life isn’t part of the problem. If everyone lived simply and peacefully, the world would be a far better place.

I have also come to realize how much I gained from my upbringing—the gold I took from the mine. I learned the importance of knowing what you believe. I learned how people in close-knit communities keep each other company in good times and support each other in difficult times. Especially during the years I lived on a farm, I learned the importance of hard work and perseverance. I also came to understand how completely we rely on the natural world, especially the plants and animals that provide us with sustenance. These experiences, and my reactions to them, have contributed decisively to my personal growth over the decades since.

Even so, my experience of growing up in a Mennonite cloister left me feeling trapped in a world that, for me at least, wasn’t the real world. I felt like I was living someone else’s idea of a life, based on a tradition of belief whose time had long passed. I wanted to be part of the world around me.

By the time I was in middle school, my family had moved to southern Arkansas, where my father started a Mennonite mission church. Though I attended public school, my parents tried to limit my exposure to the typical pursuits of teenagers at the time: watching television, listening to rock ’n’ roll, going to the movies, and playing team sports, especially football. While I would eventually come to see the wisdom in some of my parents’ limitations, I did not understand them at the time. I felt left out.

Ironically, my most painful experiences of being left out came when I ended up the focus of attention. Most of the time we were seated alphabetically in class. The girl who often sat behind me was, by general consensus, the prettiest girl in our class. In my view at least, she was also the nastiest. She happened to be captain of the cheerleading team. Predictably, her boyfriend was the quarterback of the football team. She delighted in tormenting me by acting in sexually suggestive ways toward me in front of her friends—including her boyfriend, the quarterback. I can still feel the humiliation.

As I gained my independence during my late teens and early twenties, I was gradually able to reduce the lifestyle differences between me and the non-Mennonites around me. Along the way, I became aware that these differences masked an underlying similarity. We shared many of our religious beliefs with the people around us—even the ones who lived differently. We as Mennonites were not alone in our loyalties.

Like many who practice one of the established religious traditions of the West (Judaism, Christianity, and Islam), Mennonites look to an ancient revelation as the source of their most trustworthy knowledge concerning what to believe and how to live. Scripture trumps science, and revelation trumps reason, when it comes to deciding the most important things in life. Also like many established traditions, Mennonites view this life mainly as a prelude to the next life—a “foretaste of glory divine,” as a popular Mennonite hymn puts it. On these terms, almost everything that has ultimate meaning either happened in the ancient past or will happen in the infinite future.

I left the Mennonite church because I didn’t want to live with my eyes closed and my mind made up. I wanted to open myself to discover meaning in what I learned from my own experience. I wanted to know joy in this life, not some future life.

It also became increasingly clear to me that I couldn’t serve two masters if I ended up in the ministry: the biblically literalist doctrinal commitments of the church on the one hand (belief in a supernatural God, an inerrant scripture, the virgin birth, the resurrection, and so on) and the laws of nature as articulated by science and reason on the other. I couldn’t preach one thing and believe another.

Galen Guengerich is senior minister of All Souls Unitarian Church, a historic congregation located on the Upper East Side of Manhattan. He graduated from Princeton Theological Seminary and earned a Ph.D. in theology from the University of Chicago. His sermon at All Souls on the Sunday after 9/11, “The Shaking of Foundations,” was selected as one of seven responses to 9/11, along with speeches by President Bush, Governor Pataki, and Mayor Giuliani, for Representative American Speeches 2001–2002. He is the author of God Revised: How Religion Must Evolve in a Scientific Age and a member of the Council on Foreign Relations.

A New Spirituality for Today 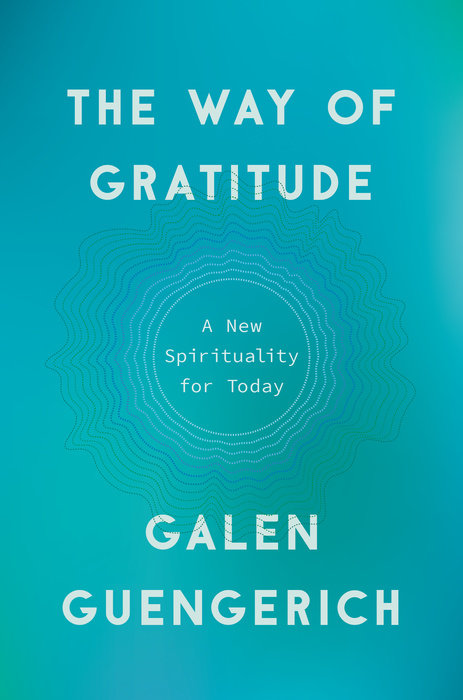