The ultimate handbook for fostering and cultivating a strong team culture, from the New York Times bestselling author of The Culture Code and The Talent Code.

“If you are a leader—or if you work with one—and want to understand how to build psychological safety, trust, and a sense of purpose for your team, then you need this book.”—Charles Duhigg, author of The Power of Habit

Building a team has never been harder than it is right now. How do you create connection and trust? How do you stay focused on your goals? In his years studying the ways successful groups work together, Daniel Coyle has spent time with elite teams around the world, observing the ways they support each other, manage conflict, and move toward a common goal. In The Culture Playbook, he distills everything he has learned into sixty concrete, actionable tips and exercises that will help your team build a cohesive, positive culture.

Great cultures, Coyle has found, are built on three essential skills: safety, vulnerability, and purpose. Within this framework, he shows us how we can better serve our teammates, ourselves, and our shared purpose, including:

• scheduling regular team “tune-ups” to place an explicit spotlight on the team’s inner workings and create conversations that surface and improve team dynamics
• creating spaces for remote coworkers to connect with their colleagues to foster a team spirit even across distances
• holding an anxiety party to serve as a pressure-relief valve, as well as a platform for people to connect and solve problems together

With reflections, exercises, and practical tips that will prove invaluable to companies, athletes, and families alike, and replete with black-and-white illustrations, The Culture Playbook is an indispensable guide to ensuring that your team performs at its best.

An excerpt from The Culture Playbook

You feel it the instant you enter a strong culture: that warm sense of cohesion, the shared willingness to speak up, the whole group thinking and feeling as one entity. We usually describe this phenomenon as “group chemistry,” and tend to regard it as mysterious and accidental. But in fact, science has shown that group chemistry—or, to use the more accurate term, psychological safety—is not mysterious at all. Rather, it is built through the exchange of belonging cues—small, vivid behaviors that send a crystal-clear message:

• You have a voice here.

Belonging cues signal our brains to switch out of vigilance mode, where we scan for possible danger, into connection mode, where we actively tune in to the people around us. That’s why strong cultures send belonging cues in abundance, especially during critical moments when norms get established, such as the first time a group comes together, the group’s first disagreement, and the first time the group learns something together. If you get these critical moments right—that is, if you flood the zone with belonging cues—you’ll go a long way toward creating the foundation of safety on which strong culture is built.

One of my favorite belonging-builders is the Oscar-nominated director Ava DuVernay, who makes a practice of learning the names of her entire crew before the first day of filming. “I don’t treat my actors differently than I treat the gaffer or the grip or the craft services manager or hair and makeup, because we’re all making the movie,” she told The Statesman. “No one is better than anyone else just because they’re in front of the camera.”

The actions that follow are a series of belonging generators. As you use them, keep in mind that your overarching goal is not merely to make people feel safe but to create an environment where everybody—from the newest hire to the CEO—knows they can speak up when it counts. “The academic research is overwhelming,” says Amy Edmondson of Harvard, who pioneered the study of psychological safety. “When people believe they can speak up at work, the learning, innovation, and performance of their organizations is greater.”

Psychological safety is powerful because it’s personal. You may experience a strong, warm sense of connection and belonging; the person next to you may be experiencing the opposite. As you explore these questions with your group, be sure to keep curiosity, perspective, and empathy foremost in mind.

Brilliance is dazzling; that’s why we tend to think that great performance can make up for bad behavior. But that belief is wrong: Studies show that the benefits of high-performing jerks almost never outweigh their cost to the group’s performance.

Zero-tolerance policies work because they send a flashing-neon belonging cue: Nobody, no matter how talented, is more important than the rest of the group. And it works: Research shows that people in groups that value civility are 59 percent more likely to share information with one another than people in groups that don’t. Here are three ways to jerk-proof your group, as well as to deal with occasional flare-ups:

• NAME IT: Make it unmistakably clear in the hiring process that jerks are not welcome. One swift way to do this is to add a jerk assessment. For example, the San Antonio Spurs evaluate hundreds of players each year for consideration in the NBA draft, assessing and measuring every factor—shooting percentage, speed, defensive skills, you name it. At the bottom of their evaluation sheet is a single line:

If this box is checked, they will not draft that player, no matter how talented they are.

To assess potential jerkhood, pay close attention to how the potential hire treats everyone—Zappos even debriefs the shuttle-bus driver who brings the candidate to the interview. Also, consider using these three questions, developed by Dylan Minor of the Kellogg School of Management at Northwestern University, which have been shown to indicate the likelihood that someone will engage in toxic behavior:

1. Which statement do you agree with more?

A. The rules should always be followed.

B. Sometimes you need to break the rules to get the job done.

A. Ask others how they are doing.

B. Move on from the past.

3. At work, do you see yourself more as:

B. A customer advocate.

(Answers B, A, and B indicate that someone is less likely to engage in toxic behavior.)

• BROADCAST IT: Send the “no jerks” message consistently and creatively. Paint it on your walls. Print it in the employee handbook—and name the specific behaviors that you will not tolerate (for example, condescension, rudeness, demands for special treatment). Repeat it in speeches, presentations, and town halls. The New Zealand All Blacks rugby team, one of the most successful sports teams of all time, has a mantra: “No Dickheads.” Other groups use the “No Asshole Rule” to similar effect. It’s simple and unmissable, and that’s why it works.

• CONFRONT IT: If someone behaves like a jerk, call them out quickly and privately, spotlighting the behavior rather than the individual. If the pattern continues, don’t hesitate to part ways. You can’t eliminate all bad behavior. But you can send a consistent, unmistakable message that no one is bigger than the group.

A veteran Navy SEALs commander puts it this way: “Your face is like a door: It can be closed or open. You want to make sure you keep the door open.”

He’s talking about your expression—specifically the muscle above your eyes, which is called the frontalis. Using the frontalis—eyebrows raised, eyes alert and open—is how we signal attention, energy, enthusiasm, and engagement. Studies by psychologist Chris Frith show that signals from our eyes, brows, and forehead are perceived as more genuine and powerful than signals from our lower face, which are easily faked (think polite smiling). So when it comes to building safety, your frontalis is the most important muscle in your body—especially when you’re working remotely and can’t send as many physical cues.

Inside strong cultures, beginnings aren’t merely beginnings: They are treated as vital moments when a sense of belonging is created, or not. That’s why these cultures love to use that most underrated, clichéd tool of all: the icebreaker. You know, that supremely corny, cringe-inducing round-robin technique where individuals take turns answering personal questions in order to create cohesion. The keys to using them well are (1) to understand that the cringe is the point—the mutual vulnerability will draw you closer; and (2) to use them tactically, not indiscriminately. Here are a couple tips:

• Distinguish between icebreakers for Day One—the first time people meet—and icebreakers for project work, when people who already know one another are forming a team to work toward a specific goal. They may feel similar, but they have vastly different functions. Day One icebreakers are for getting to know colleagues as people—their likes, dislikes, interests—while the new-project icebreakers are for generating energy and clarity around the work itself.

Daniel Coyle is the New York Times bestselling author of The Culture Code, The Talent Code, The Little Book of Talent, The Secret Race, Lance Armstrong’s War, and Hardball: A Season in the Projects. Coyle, who works as an advisor to the Cleveland Guardians, lives in Cleveland, Ohio, during the school year and in Homer, Alaska, during the summer with his wife, Jen, and their four children. 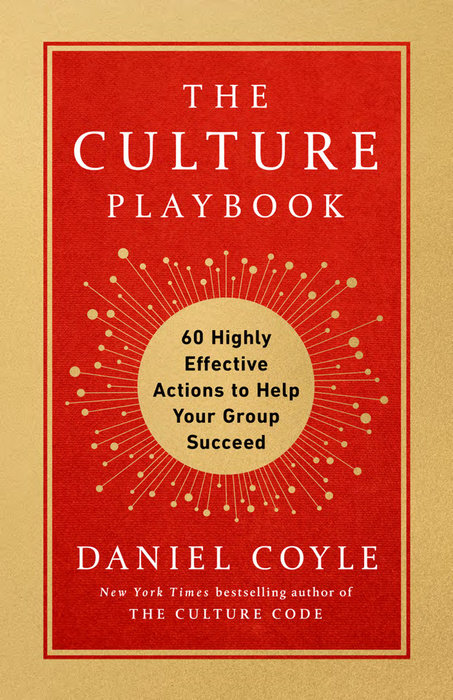