The Mayan god of death sends a young woman on a harrowing, life-changing journey in this dark, one-of-a-kind fairy tale inspired by Mexican folklore.

“A spellbinding fairy tale rooted in Mexican mythology . . . Gods of Jade and Shadow is a magical fairy tale about identity, freedom, and love, and it's like nothing you've read before.”—Bustle

The Jazz Age is in full swing, but Casiopea Tun is too busy cleaning the floors of her wealthy grandfather’s house to listen to any fast tunes. Nevertheless, she dreams of a life far from her dusty small town in southern Mexico. A life she can call her own.

Yet this new life seems as distant as the stars, until the day she finds a curious wooden box in her grandfather’s room. She opens it—and accidentally frees the spirit of the Mayan god of death, who requests her help in recovering his throne from his treacherous brother. Failure will mean Casiopea’s demise, but success could make her dreams come true.

In the company of the strangely alluring god and armed with her wits, Casiopea begins an adventure that will take her on a cross-country odyssey from the jungles of Yucatán to the bright lights of Mexico City—and deep into the darkness of the Mayan underworld.

Praise for Gods of Jade and Shadow

“A dark, dazzling fairy tale . . . a whirlwind tour of a 1920s Mexico vivid with jazz, the memories of revolution, and gods, demons, and magic.”—NPR

“A magical novel of duality, tradition, and change . . . Moreno-Garcia’s seamless blend of mythology and history provides a ripe setting for Casiopea’s stellar journey of self-discovery, which culminates in a dramatic denouement. Readers will gladly immerse themselves in Moreno-Garcia’s rich and complex tale of desperate hopes and complicated relationships.”—Publishers Weekly (starred review)

An excerpt from Gods of Jade and Shadow

Some people are born under a lucky star, while others have their misfortune telegraphed by the position of the planets. Casiopea Tun, named after a constellation, was born under the most rotten star imaginable in the firmament. She was eighteen, penniless, and had grown up in Uukumil, a drab town where mule-­drawn railcars stopped twice a week and the sun scorched out dreams. She was reasonable enough to recognize that many other young women lived in equally drab, equally small towns. However, she doubted that many other young women had to endure the living hell that was her daily life in grandfather Cirilo Leyva’s house.

Cirilo was a bitter man, with more poison in his shriveled body than was in the stinger of a white scorpion. Casiopea tended to him. She served his meals, ironed his clothes, and combed his sparse hair. When the old brute, who still had enough strength to beat her over the head with his cane when it pleased him, was not yelling for his grandchild to fetch him a glass of water or his slippers, her aunts and cousins were telling Casiopea to do the laundry, scrub the floors, and dust the living room.

“Do as they ask; we wouldn’t want them to say we are spongers,” Casiopea’s mother told her. Casiopea swallowed her angry reply because it made no sense to discuss her mistreatment with Mother, whose solution to every problem was to pray to God.

Casiopea, who had prayed at the age of ten for her cousin Martín to go off and live in another town, far from her, understood by now that God, if he existed, did not give a damn about her. What had God done for Casiopea, aside from taking her father from her? That quiet, patient clerk with a love for poetry, a fascination with Mayan and Greek mythology, a knack for bedtime stories. A man whose heart gave up one morning, like a poorly wound clock. His death sent Casiopea and her mother packing back to Grandfather’s house. Mother’s family had been charitable, if one’s definition of charity is that they were put immediately to work while their idle relatives twiddled their thumbs.

Had Casiopea possessed her father’s pronounced romantic leanings, perhaps she might have seen herself as a Cinderella-­like figure. But although she treasured his old books, the skeletal remains of his collection—­especially the sonnets by Quevedo, wells of sentiment for a young heart—­she had decided it would be nonsense to configure herself into a tragic heroine. Instead, she chose to focus on more pragmatic issues, mainly that her horrible grandfather, despite his constant yelling, had promised that upon his passing Casiopea would be the beneficiary of a modest sum of money, enough that it might allow her to move to Mérida.

The atlas showed her the distance from the town to the city. She measured it with the tips of her fingers. One day.

In the meantime, Casiopea lived in Cirilo’s house. She rose early and committed to her chores, tight-­lipped, like a soldier on a campaign.

That afternoon she had been entrusted with the scrubbing of the hallway floor. She did not mind, because it allowed her to keep abreast of her grandfather’s condition. Cirilo was doing poorly; they did not think he’d make it past the autumn. The doctor had come to pay him a visit and was talking to her aunts. Their voices drifted into the hall from the nearby living room, the clinking of dainty china cups punctuating one word here and another there. Casiopea moved her brush against the red tiles, attempting to follow the conversation—­expecting to be informed of anything that went on in the house in any other way was ridiculous; they never bothered talking to her except to bark orders—­until two shiny boots stopped in front of her bucket. She did not have to look up to know it was Martín. She recognized his shoes.

Martín was a youthful copy of their grandfather. He was square-­shouldered, robust, with thick, strong hands that delivered a massive blow. She delighted in thinking that when he grew old, he would also become an ugly, liver-­spotted wretch without teeth, like Cirilo.

“There you are. My mother is going crazy looking for you,” he said. He looked away when he spoke.

“What is it?” she asked, resting her hands against her skirt.

“She says you are to go to the butcher. The silly codger demands a good cut of beef for supper. While you’re out, get me my cigarettes.”

Casiopea wore no shoes and no stockings and a frayed brown skirt. Her mother emphasized neatness in person and dress, but Casiopea didn’t believe there was much point in fretting about the hem of her clothes when she was waxing floors or dusting rooms. Still, she must don a clean skirt if she was heading out.

Casiopea eyed Martín and considered defying him, but she was practical. If she insisted on changing, then Martín would give her a good smack and she would accomplish nothing except wasting her time. Sometimes Martín could be reasoned with, or at least tricked into changing his mind, but she could tell by his sanguine expression that he’d had a row with someone and was taking it out on her.

He looked disappointed. He’d wanted a scuffle. She smiled when he handed her the money she needed to run the errands. He looked so put off by that smile, she thought for a moment he was going to slap her for no reason. Casiopea left the house in her dirty skirt, without even bothering to wrap a shawl around her head.

In 1922 Governor Felipe Carrillo Puerto had said women could now vote, but by 1924 he’d faced a firing squad—­which is exactly what you’d expect to happen to governors who go around delivering speeches in Mayan and then don’t align themselves with the correct people in power—­and they’d revoked that privilege. Not that this ever mattered in Uukumil. It was 1927, but it might as well have been 1807. The revolution passed through it, yet it remained what it had been. A town with nothing of note, except for a modest sascab quarry; the white powder shoveled out was used for dirt roads. Oh, there had been a henequen plantation nearby once upon a time, but she knew little about it; her grandfather was no hacendado. His money, as far as Casiopea could tell, came from the buildings he owned in Mérida. He also muttered about gold, although that was likely more talk than anything else.

So, while women in other parts of the world cut their hair daringly short and danced the Charleston, Uukumil was the kind of place where Casiopea might be chided if she walked around town without her shawl wrapping her head.

The country was supposed to be secularist after the revolution, something that sounded fine when it was printed as a decree, but was harder to enforce once push came to shove. Cristero rebellions bubbled down the center of Mexico whenever the government tried to restrict religious activity. That February in Jalisco and Guanjuato all priests had been detained for inciting people to rise against the anti-­Catholic measures promoted by the president. Yet Yucatán was tolerant of the Cristeros, and it had not flamed up like other states. Yucatán had always been a world apart, an island, even if the atlas assured Casiopea she lived on a verdant peninsula.

No wonder in lazy Uukumil everyone held to the old ways. No wonder, either, that their priest grew more overzealous, intent on preserving morality and the Catholic faith. He eyed every woman in town with suspicion. Each diminutive infraction to decency and virtue was catalogued. Women were meant to bear the brunt of inquiries because they descended from Eve, who had been weak and sinned, eating from the juicy, forbidden apple.

If the priest saw Casiopea he would drag her back to her house, but if he did, what of it? It was not as if the priest would strike her any harder than Martín would, and her stupid cousin had given her no chance to tidy herself.

Casiopea slowly walked to the town square, which was dominated by the church. She must follow Martín’s orders, but she would take her time doing so. She glanced at the businesses bunched under the square’s high arcades. They had a druggist, a haberdasher, a physician. She realized this was more than other towns could claim, and still she couldn’t help but feel dissatisfied. Her father had been from Mérida and had whisked her mother off to the city, where Casiopea was born. She thought she belonged there. Or, anywhere else, for that matter. Her hands were hard and ugly from beating the laundry against the stone lavadero, but her mind had the worst of it. She yearned for a sliver of freedom.

Somewhere, far from the bothersome grandfather and impertinent coterie of relatives, there would be sleek automobiles (she wished to drive one), daring pretty dresses (which she’d spotted in newspapers), dances (the faster, the better), and a view of the Pacific sea at night (she knew it courtesy of a stolen postcard). She had cut out photos of all these items and placed them under her pillow, and when she dreamed, she dreamed of night swimming, of dresses with sequins, and a clear, starlit sky. 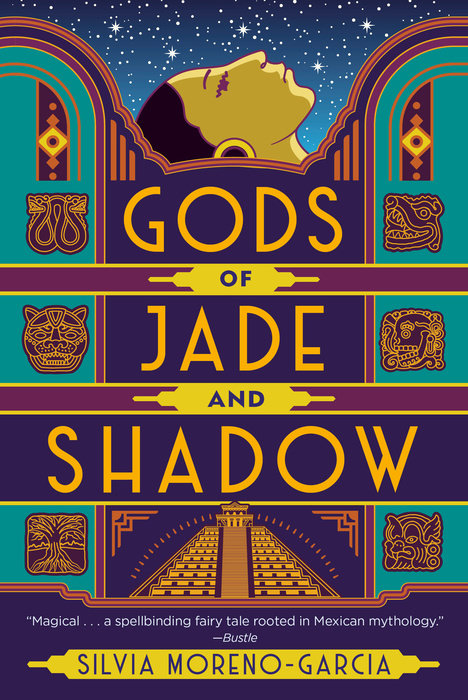