NEW YORK TIMES EDITORS’ CHOICE • A courageous young Sri Lankan woman tries to protect her dream of becoming a doctor in this “heartbreaking exploration of a family fractured by civil war” (Brit Bennett, #1 New York Times bestselling author of The Vanishing Half).

“An achingly moving portrait of a world full of turmoil, but one in which human connections and shared stories can teach us how—and as importantly, why—to survive.”—Celeste Ng, New York Times bestselling author of Little Fires Everywhere

Jaffna, 1981. Sixteen-year-old Sashi wants to become a doctor. But over the next decade, a vicious civil war tears through her home, and her dream spins off course as she sees her four beloved brothers and their friend K swept up in the mounting violence. Desperate to act, Sashi accepts K’s invitation to work as a medic at a field hospital for the militant Tamil Tigers, who, following years of state discrimination and violence, are fighting for a separate homeland for Sri Lanka’s Tamil minority. But after the Tigers murder one of her teachers and Indian peacekeepers arrive only to commit further atrocities, Sashi begins to question where she stands. When one of her medical school professors, a Tamil feminist and dissident, invites her to join a secret project documenting human rights violations, she embarks on a dangerous path that will change her forever.

Set during the early years of Sri Lanka’s three-decade civil war, Brotherless Night is a heartrending portrait of one woman’s moral journey and a testament to both the enduring impact of war and the bonds of home.

An excerpt from Brotherless Night

The Boys with the Jaffna Eyes

I met the first terrorist I knew when he was deciding to become one. K and his family lived down the road from me and mine, in one village of the Tamil town called Jaffna, in Sri Lanka. The Jaffna peninsula is the northernmost part of the country. Many people have died there: some killed by the Sri Lankan Army and the state, some by the Indian Peace Keeping Force, and some by the Tamil separatists, whom you know as the terrorists. Many people, of course, have also lived.

In early 1981, I was almost sixteen years old. I already wanted to become a doctor like my grandfather, and I had recently begun attending my brothers’ school, where girls my age were accepted for Advanced Level studies. In those days, I thought mostly about the university entrance exams. K, too, dreamed of medical school. And this was what made us alike, long before K chose the movement, long before I treated patients in a New York City emergency room. Long before we became so different.

K had the upper hand from the first, not because he was one year older, or a boy, but because I was his patient. Our meeting was both gruesome and fortunate for me. On the day that we met, I was boiling water for tea. I had to use a piece of cloth to hold the pot’s metal handle. But that morning the cloth slipped, the handle slipped, and the pot slipped, pouring scalding water all over me. I screamed and screamed for my mother—­Amma! My shrill voice carried out onto the road, where K was passing. Letting his bicycle fall in the dirt at our gate, he ran inside.

By the time he reached me in the kitchen at the back of the house, Amma had already found me. As bubbles rose and popped on my skin, I shut my eyes, but I could hear her sobbing, and the sounds of pots and pans clattering to the floor. With every clang, heat flared around and inside me. Under my skin, another skin burned. I cried and called for Murugan, Pillaiyar, Shiva.

“Sashi!” he said, and I opened my eyes to his face without recognising it. “Sit!” he said, and pointed to a chair. When I kept screaming but did not move, he grabbed my hands, pushed me down into the chair, and peeled my blouse up, baring my scorched stomach. I heard Amma’s aiyo! beside me as though she were speaking from a great distance. Snatching a bowl of eggs off the table, K began cracking them onto the wounds.

“I have to fetch water—­” Amma said. Clutching a pan, she tried to move past him.

But he put his shoulders between her and the doorway. “This will cool the burn,” he said.

She stood there uselessly. I stared at him, trying to focus on anything but the pain, and saw only his thumbs working in and out of the eggshells, scraping the slime of the whites cleanly onto the swelling rawness. He did it very swiftly, as though he had had a lot of practise, as though every scrap of egg was precious. My skin was so hot that even now, when I remember those quick and clever hands and the slippery shock of relief, I cannot quite believe that the eggs did not just cook on my flesh.

When the last one was cracked and steaming on my skin, K looked up at Amma. “Are there more?” She did not respond, still stunned. “More eggs?” he said. She blinked, then nodded. “Good—­keep covering the burn. I’ll go for the doctor—­”

When K returned with the physician half an hour later, the older man looked over the makeshift dressing with approval. “It should heal,” he said. “You may not even have a scar. My own mother used to crack eggs onto burns. This is not the kind of medicine they teach in school. Whose idea was it?”

K glanced at me without saying anything. I crackled inside still.

“I didn’t know what to do,” Amma said softly.

So I began as K’s patient, though he ended as mine.

So many foods remind me of K now.

When he came to visit me a few days after the accident, his aunt Neelo came with him, bearing my favourite maampazham—­mangoes—­and vaazhaipazham, the special small, sweet bananas that grew in their yard. My mother must have mentioned that I liked them. The fruit pleased me, but for once, I felt more interested in the boy, who until this moment had belonged more to my brothers than to me. I tried to examine him without being too obvious. His shirt was tucked unevenly into his trousers, which were too large. He looked sturdy, but not skinny, and had a rim of hair on his upper lip that was not quite a moustache. It barely showed—­he was dark from the sun. Thick, black-­framed spectacles dominated his thin, sensitive face. He wiped them carefully with a handkerchief so worn it was nearly transparent. I did not know then that it had belonged to his late mother.

He replaced his spectacles, and when I realised that he was studying me with equal intensity I looked away. Everyone always spoke about how clever K was and what an excellent physician he would be. But those people were only speculating. I knew absolutely, with an indebtedness that ran through my body, and I felt both envy and something else that confused me. The thick lenses distorted his eyes, but it was too late; I already knew they were lovely and old, full of a certainty that appealed to me. I wanted that certainty for myself, to be someone who could look at burned flesh and then touch it.

K looked over at my mother and his aunt, who were deep in conversation, and then back at me.

“How are you feeling?” he asked.

“I feel better. But it itches,” I said, plucking at my blouse. My mother had given me the oldest, most worn dress she had, and still, every time the fabric touched my skin, I hurt. “I also want to do medicine. How did you know what to do?”

He shrugged. “It made sense, even though it wasn’t modern. The protein and fat soothe the burn.”

Out of habit, I rubbed at the wound. “Had you ever treated some—­”

He leaned forward abruptly and put his hand over mine. “Don’t scratch it—­you’ll scar,” he said. After a moment, he let his fingers fall away. I looked over at my mother and his aunt, who were still talking. I moved my hand from my stomach, and we sat in silence.

“Are your brothers here?” he asked finally.

They weren’t, and we sat quietly until Neelo Aunty came to collect him. He bid me goodbye with a formal face. “Good luck with your studies,” he said impersonally, as though his hands had never touched me.

So we were not friends at first, although he had already been more intimate with me than any other boy I had known.

When I was well enough to return to school, I walked stiffly through the green of our campus, looking for him. My torso was bandaged and schoolgirl-­uniformed, the pain appropriately dressed and private again. As I walked, I laid my hand gently over the hurt to make sure it was still there. The burn matched my pulse in its throbbing, already on its way to becoming a near-­invisible scar. He was the only other person there who had seen my injury—­even my brothers had not—­and I felt that he knew some indecent, vital secret that I needed to confirm. But although I looked for him in the sea of faces, he was nowhere to be found.

When we did meet again, some time later at the temple in our village, his moustache appeared slightly more successful. He glanced at my belly, where one of my mother’s old sari blouses covered smaller bandages. I lowered my arm across my body and looked away. Standing with my brothers in the line of men waiting to be blessed, K did not seem unusual. You would have thought him just one of many dark men with white smiles. And, you know, you would have been wrong.

Let me tell you about dark men with white smiles, these Tamil men I loved and who belonged with me. In my house there were four of them. Each of my brothers resembled my father in a different way. All of them had what some people call Jaffna eyes—­dark and piercing. If you have seen such eyes, you will know what I mean.

V. V. Ganeshananthan is the author of Love Marriage, which was longlisted for the Women's Prize and named one of the best books of the year by The Washington Post. Her work has appeared in Granta, The New York Times, and The Best American Nonrequired Reading, among other publications. A former vice president of the South Asian Journalists Association, she has also served on the board of the Asian American Writers’ Workshop, and is presently a member of the board of directors of the American Institute for Sri Lankan Studies and the Minnesota Prison Writing Workshop. She teaches in the MFA program at the University of Minnesota and co-hosts the Fiction/Non/Fiction podcast on Literary Hub, which is about the intersection of literature and the news. 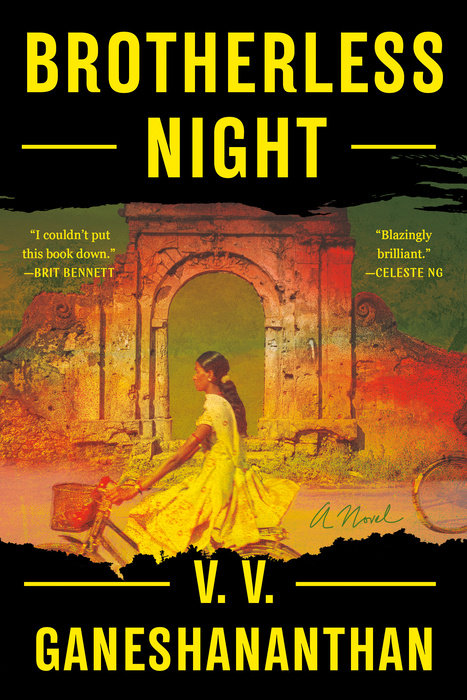