In the twenty-second century Earth obtains limitless, free energy from a source science little understands: an exchange between Earth and a parallel universe, using a process devised by the aliens. But even free energy has a price. The transference process itself will eventually lead to the destruction of the Earth's Sun—and of Earth itself.

Only a few know the terrifying truth—an outcast Earth scientist, a rebellious alien inhabitant of a dying planet, a lunar-born human intuitionist who senses the imminent annihilation of the Sun. They know the truth—but who will listen? They have foreseen the cost of abundant energy—but who will believe? These few beings, human and alien, hold the key to Earth's survival.

An excerpt from The Gods Themselves

"Don't be dramatic," said Myron Bronowski, placidly. "You didn't expect to. You told me that." He was tossing peanuts into the air and catching them in his plump-lipped mouth as they came down. He never missed. He was not very tall, not very thin.

"That doesn't make it pleasant. But you're right, it doesn't matter. There are other things J can do and intend to do and, besides that, I depend on you. If you could only find out-"

"Don't finish, Pete. I've heard it all before. All I have to do is decipher the thinking of a non-human intelligence."

"A better-than-human intelligence. Those creatures from the para-Universe are trying to make themselves understood."

"That may be," sighed Bronowski, "but they're trying to do it through my intelligence, which is better than human I sometimes think, but not much. Sometimes, in the dark of the night, I lie awake and wonder if different intelligences can communicate at all; or, if I've had a particularly bad day, whether the phrase 'different intelligences' has meaning at all."

"It does," said Lamont savagely, his hands clearly bailing into fists within his lab coat pockets. "It means Hallam and me. It means that fool-hero, Dr. Frederick Hallam and me. We're different intelligences because when I talk to him he doesn't understand. His idiot face gets redder and his eyes bulge and his ears block. I'd say his mind stops functioning, but flack the proof of any other state from which it might stop."

Bronowski murmured, "What a way to speak of the Father of the Electron Pump."

"That's it. Reputed Father of the Electron Pump. A bastard birth, if ever there was one. His contribution was least in substance. I know."

"I know, too. You've told me often," and Bronowski tossed another peanut into the air. He didn't miss.

It had happened thirty years before. Frederick Hallam was a radiochemist, with the print on his doctoral dissertation still wet and with no sign whatever of being a world-shaker.

What began the shaking of the world was the fact

that a dusty reagent bottle marked "Tungsten Metal" stood on his desk. It wasn't his; he had never used it. It was a legacy from some dim day when some past n habitant of the office had
wanted tungsten for some long-forgotten reason. It wasn't even really tungsten any more. It consisted of small pellets of what was now heavily layered with oxide-gray and dusty. No use to anyone.

And one day Hallam entered the laboratory (well, it was October 3, 2070, to be exact), got to work, stopped shortly before 10 A.M., stared transfixed at the bottle, and lifted it. It was as dusty as ever, the label as faded, but he called out, 'God damn it; who the hell has been tampering with this?"

That, at least, was the account of Denison, who overheard the remark and who told it to Lamont a generation later. The official tale of the discovery, as reported n the books, leaves out the phraseology. One gets the impression of a keen-eyed chemist, aware of change and instantly drawing deep-seated deductions.

Not so. Hallam had no use for the tungsten; it was of no earthly value to him and any tampering with it could be of no possible importance to him. However, he hated any interference with his desk (as so many do) and he suspected others of possessing keen desires to engage in such interference out of sheer malice.

No one at the time admitted to knowing anything about the matter. Benjamin Allan Denison, who overheard the initial remark, had an office immediately across the corridor and both doors were open. He looked up and met Hallam's accusatory eye.

He didn't particularly like Hallam (no one particularly did) and he had slept badly the night before. He was, as it happened and as he later recalled, rather pleased to have someone on whom to vent his spleen, and Hallam made the perfect candidate.

When Hallam held the bottle up to his face, Denison pulled back with clear distaste. "Why the devil should I be interested in your tungsten?" he demanded. "Why should anyone? If you'll look at the bottle, you'll see that the thing hasn't been opened for twenty years; and if you hadn't put your own grubby paws on it, you would have seen no one had touched it."

Hallam flushed a slow, angry red. He said, tightly, "Listen, Denison, someone has changed the contents. That's not the tungsten."

Denison allowed himself a small, but distinct sniff. "How would you know?"

Of such things, petty annoyance and aimless thrusts, is history made.

It would have been an unfortunate remark in any case. Denison's scholastic record, as fresh as Hallam's, was far more impressive and he was the bright-young man of the department. Hallam knew this and, what was worse, Denison knew it too, and made no secret of it. Denison's "How would you know?" with the clear and unmistakable emphasis on the "you," was ample motivation for all that followed. Without it, Hallam would never have become the greatest and most revered scientist in history, to use the exact phrase Denison later used in his interview with Lamont.

Officially, Hallam had come in on that fateful morning, noticed the dusty gray pellets gone-not even the dust on the inside surface remaining-and clear iron-gray metal in their place. Naturally, he investigated.

But place the official version to one side. It was Denison. Had he confined himself to a simple negative, or a shrug, the chances are that Hallam would have asked others, then eventually wearied of the unexplained event, put the bottle to one side, and let subsequent tragedy, whether subtle or drastic (depending on how long the ultimate discovery was delayed), guide the future. In any event, it would not have been Hallam who rode the whirlwind to the heights.

With the "How would you know?" cutting him down, however, Hallam could only retort wildly, "I'll show you that I know."

And after that, nothing could prevent him from going to extremes. The analysis of the metal in the old container became his number-one priority, and his prime goal was to wipe the haughtine from Denison's thin-nosed face and the perpetual trace of a sneer from his pale lips.

Denison never forgot that moment for it was his own remark that drove Hallam to the Nobel Prize and himself to oblivion.

He had no way of knowing (or if he knew he would not then have cared) that there was an overwhelming stubbornness in Hallam, the mediocrity's frightened need to safeguard his pride, that would carry the day at that time more than all Denison's native brilliance would have.

Hallam moved at once and directly. He carried his metal to the mass spectrography department. As a radiation chemist it was a natural move. He knew the technicians there, he had worked with them, and he was forceful. He was forceful to such an effect, indeed, that the job was placed ahead of projects of much greater pith and moment.

Hallam's broad and humorless face wrinkled into a harsh smile. "All right. We'll tell that to Bright-boy Denison. I want a report and--

"But wait awhile, Dr. Hallam. I'm telling you it's not tungsten, but that doesn't mean I know what it is."

"What do you mean you don't know what it is."

"I mean the results are ridiculous." The technician thought a while. "Impossible, actually. The chargemass ratio is all wrong."

"All wrong in what way?"

"Well, then," said Hallam and, regardless of the motive that was driving him, his next remark set him on the road to the Nobel Prize and, it might even be argued, a deserved one, "get the frequency of its characteristic x-radiation and figure out the charge. Don't just sit around and talk about something being impossible."

It was a troubled technician who came into Hallam's office a few days later.

Hallam ignored the trouble on the other's face-he was never sensitive-and said, "Did you find-"He then cast a troubled look of his own at Denison, sitting at the desk in his own lab and shut the door. "Did you find the nuclear charge?"

"If you made a measurement, that's it. Don't argue with the facts."

Tracy rubbed his ear and said, "I've got to, Doe. If I take the measurements seriously, then what you've given me is plutonium-186."

"But that's impossible. There's no such isotope. There can't be."

"That's what I'm saying to you. But those are the measurements."

"But a situation like that leaves the nucleus over fifty neutrons short. You can't have plutonium-186. I You couldn't squeeze ninety-four protons into one nucleus with only ninety-two neutrons
and expect it to hang together for even a trillion-trillionth of a second."

And then Hallam stopped to think. It was tungsten he was missing and one of its isotopes, tungsten-186, was stable. Tungsten-186 had 74 protons and 112 neutrons in its nucleus. Could something have turned twenty neutrons into twenty protons? Surely that was impossible. 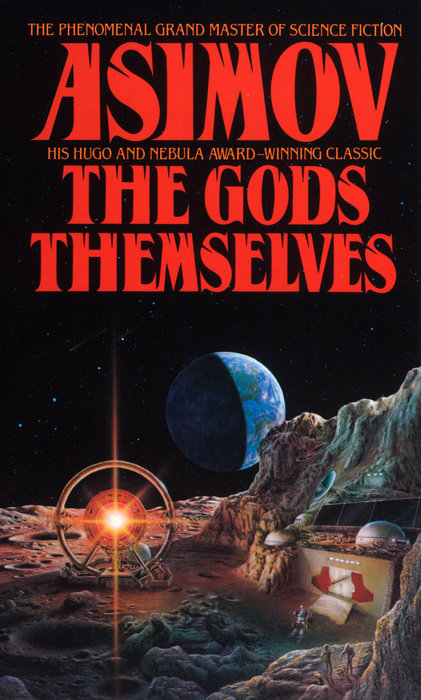