A millennium into the future, two advancements have altered the course of human history:  the colonization of the Galaxy and the creation of the positronic brain.  On the beautiful Outer World planet of Solaria, a handful of human colonists lead a hermit-like existence, their every need attended to by their faithful robot servants.  To this strange and provocative planet comes Detective Elijah Baley, sent from the streets of New York with his positronic partner, the robot R. Daneel Olivaw, to solve an incredible murder that has rocked Solaria to its foundations.  The victim had been so reclusive that he appeared to his associates only through holographic projection.  Yet someone had gotten close enough to bludgeon him to death while robots looked on.  Now Baley and Olivaw are faced with two clear impossibilities:  Either the Solarian was killed by one of his robots--unthinkable under the laws of Robotics--or he was killed by the woman who loved him so much that she never came into his presence!

An excerpt from The Naked Sun

1
A QUESTION IS ASKED

The call to Washington had been disturbing enough in itself. It came without details, a mere summons; and that made it worse. It included travel slips directing round trip by plane and that made it still worse.

Partly it was the sense of urgency introduced by any order for plane travel. Partly it was the thought of the plane; simply that. Still, that was just the beginning of uneasiness and, as yet, easy to suppress.

After all, Lije Baley had been in a plane four times before. Once he had even crossed the continent. So, while plane travel is never pleasant, it would, at least, not be a complete step into the unknown.

And then, the trip from New York to Washington would take only an hour. The take-off would be from New York Runway Number 2, which, like all official Runways, was decently enclosed, with a lock opening to the unprotected atmosphere only after air speed had been achieved. The arrival would be at Washington Runway Number 5, which was similarly protected.

Furthermore, as Baley well knew, there would be no windows on the plane. There would be good lighting, decent food, all necessary conveniences. The radio-controlled flight would be smooth; there would scarcely be any sensation of motion once the plane was airborne.

He explained all this to himself, and to Jessie, his wife, who had never been airborne and who approached such matters with terror.

She said, “But I don’t like you to take a plane, Lije. It isn’t natural. Why can’t you take the Expressways?”

“Because that would take ten hours”—Baley’s long face was set in dour lines—“and because I’m a member of the City Police Force and have to follow the orders of my superiors. At least, I do if I want to keep my C-6 rating.”

There was no arguing with that.


Baley took the plane and kept his eyes firmly on the news-strip that unreeled smoothly and continuously from the eye-level dispenser. The City was proud of that service: news, features, humorous articles, educational bits, occasional fiction. Someday the strips would be converted to film, it was said, since enclosing the eyes with a viewer would be an even more efficient way of distracting the passenger from his surroundings.

Baley kept his eyes on the unreeling strip, not only for the sake of distraction, but also because etiquette required it. There were five other passengers on the plane (he could not help noticing that much) and each one of them had his private right to whatever degree of fear and anxiety his nature and upbringing made him feel.

Baley would certainly resent the intrusion of anyone else on his own uneasiness. He wanted no strange eyes on the whiteness of his knuckles where his hands gripped the armrest, or the dampish stain they would leave when he took them away.

He told himself: I’m enclosed. This plane is just a little City.

But he didn’t fool himself. There was an inch of steel at his left; he could feel it with his elbow. Past that, nothing——

Well, air! But that was nothing, really.

A thousand miles of it in one direction. A thousand in another. One mile of it, maybe two, straight down.

He almost wished he could see straight down, glimpse the top of the buried Cities he was passing over; New York, Philadelphia, Baltimore, Washington. He imagined the rolling, low-slung cluster-complexes of domes he had never seen but knew to be there. And under them, for a mile underground and dozens of miles in every direction, would be the Cities.

The endless, hiving corridors of the Cities, he thought, alive with people; apartments, community kitchens, factories, Expressways; all comfortable and warm with the evidence of man.

And he himself was isolated in the cold and featureless air in a small bullet of metal, moving through emptiness.

His hands trembled, and he forced his eyes to focus on the strip of paper and read a bit.

It was a short story dealing with Galactic exploration and it was quite obvious that the hero was an Earthman.

Baley muttered in exasperation, then held his breath momentarily in dismay at his boorishness in making a sound.

It was completely ridiculous, though. It was pandering to childishness, this pretense that Earthmen could invade space. Galactic exploration! The Galaxy was closed to Earthmen. It was preempted by the Spacers, whose ancestors had been Earthmen centuries before. Those ancestors had reached the Outer Worlds first, found themselves comfortable, and their descendants had lowered the bars to immigration. They had penned in Earth and their Earthman cousins. And Earth’s City civilization completed the task, imprisoning Earthmen within the Cities by a wall of fear of open spaces that barred them from the robot-run farming and mining areas of their own planet; from even that.

Baley thought bitterly: Jehoshaphat! If we don’t like it, let’s do something about it. Let’s not just waste time with fairy tales.

But there was nothing to do about it, and he knew it.

Then the plane landed. He and his fellow-passengers emerged and scattered away from one another, never looking.

Baley glanced at his watch and decided there was time for freshening before taking the Expressway to the Justice Department. He was glad there was. The sound and clamor of life, the huge vaulted chamber of the airport with City corridors leading off on numerous levels, everything else he saw and heard, gave him the feeling of being safely and warmly enclosed in the bowels and womb of the City. It washed away anxiety and only a shower was necessary to complete the job.

He needed a transient’s permit to make use of one of the community bathrooms, but presentation of his travel orders eliminated any difficulties. There was only the routine stamping, with private-stall privileges (the date carefully marked to prevent abuse) and a slim strip of directions for getting to the assigned spot.

Baley was thankful for the feel of the strips beneath his feet. It was with something amounting to luxury that he felt himself accelerate as he moved from strip to moving strip inward toward the speeding Expressway. He swung himself aboard lightly, taking the seat to which his rating entitled him.

It wasn’t a rush hour; seats were available. The bathroom, when he reached it, was not unduly crowded either. The stall assigned to him was in decent order with a launderette that worked well.

With his water ration consumed to good purpose and his clothing freshened he felt ready to tackle the Justice Department. Ironically enough, he even felt cheerful.

Undersecretary Albert Minnim was a small, compact man, ruddy of skin, and graying, with the angles of his body smoothed down and softened. He exuded an air of cleanliness and smelled faintly of tonic. It all spoke of the good things of life that came with the liberal rations obtained by those high in Administration.

Baley felt sallow and rawboned in comparison. He was conscious of his own large hands, deep-set eyes, a general sense of cragginess.

Minnim said cordially, “Sit down, Baley. Do you smoke?”

He drew it out as he spoke, and Minnim thrust back a cigar he had half drawn.

Baley was instantly regretful. A cigar was better than nothing and he would have appreciated the gift. Even with the increased tobacco ration that went along with his recent promotion from C-5 to C-6 he wasn’t exactly swimming in pipe fixings.

“Please light up, if you care to,” said Minnim, and waited with a kind of paternal patience while Baley measured out a careful quantity of tobacco and affixed the pipe baffle.

Baley said, his eyes on his pipe, “I have not been told the reason for my being called to Washington, sir.”

“I know that,” said Minnim. He smiled. “I can fix that right now. You are being reassigned temporarily.”

Baley raised his eyebrows and looked thoughtful. “How temporarily, sir?”

Baley was aware of the advantages and disadvantages of reassignment. As a transient in a City of which he was not a resident, he would probably live on a scale better than his official rating entitled him to. On the other hand, it would be very unlikely that Jessie[…]”

Baley was aware of the advantages and disadvantages of reassignment. As a transient in a City of which he was not a resident, he would probably live on a scale better than his official rating entitled him to. On the other hand, it would be very unlikely that Jessie and their son, Bentley, would be allowed to travel with him. They would be taken care of, to be sure, there in New York, but Baley was a domesticated creature and he did not enjoy the thought of separation.

Then, too, a reassignment meant a specific job of work, which was good, and a responsibility greater than that ordinarily expected of the individual detective, which could be uncomfortable. Baley had, not too many months earlier, survived the responsibility of the investigation of the murder of a Spacer just outside New York. He was not overjoyed at the prospect of another such detail, or anything approaching it. 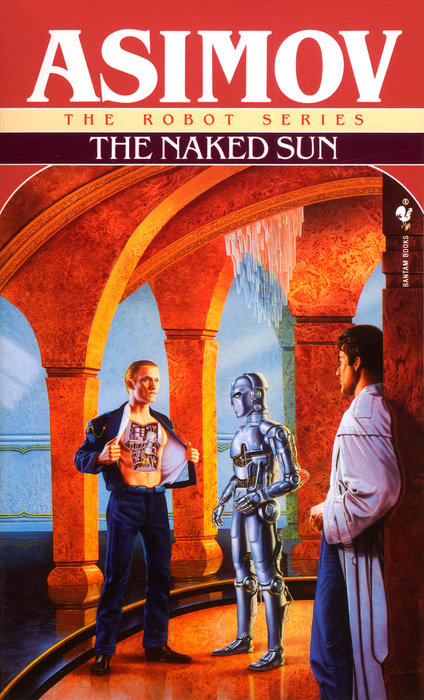