“Lush, irresistible . . . It took me into the hearts of women I could otherwise never know. I was transported.”—Amy Bloom, New York Times bestselling author of White Houses and Away

Conjure Women is a sweeping story that brings the world of the South before and after the Civil War vividly to life. Spanning eras and generations, it tells of the lives of three unforgettable women: Miss May Belle, a wise healing woman; her precocious and observant daughter Rue, who is reluctant to follow in her mother’s footsteps as a midwife; and their master’s daughter Varina. The secrets and bonds among these women and their community come to a head at the beginning of a war and at the birth of an accursed child, who sets the townspeople alight with fear and a spreading superstition that threatens their newly won, tenuous freedom.

Magnificently written, brilliantly researched, richly imagined, Conjure Women moves back and forth in time to tell the haunting story of Rue, Varina, and May Belle, their passions and friendships, and the lengths they will go to save themselves and those they love.


LONGLISTED FOR THE CENTER FOR FICTION FIRST NOVEL PRIZE

“An engrossing debut . . . Atakora structures a plot with plenty of satisfying twists. Life in the immediate aftermath of slavery is powerfully rendered in this impressive first novel.”—Kirkus Reviews (starred review)

An excerpt from Conjure Women

The black baby’s crying wormed and bloomed. It woke Rue by halves from her sleep so that through the first few strains of the sound she could not be sure when or where she was, but soon the feeble cry strengthened, like a desperate knocking at her front door, and she came all the way awake, and knew that she was needed, again.

She unwound herself from her thin linen sheet. If there were dreams, she’d lost them now that she’d stood up. There was only the crying, not so loud as it was strange, unsettling. She smoothed her nightmare hair and made ready her face. Stepped out from her cabin, barefooted.

At the center of the town, between the gathering of low cabins that sat close and humble, Rue could make out the collection of folks, like herself, who’d been drawn from their sleep by the haunting cry. Anxious, bedraggled, they emerged to suppose at that unearthly sound. It was a moonless night, the clouds colluding to block out the stars, and the crowd knitted itself tightly in a weave of black whisperings.

“You hearin’ that, Miss Rue?” one of them said when she approached.

What little light there was streamed down from behind the crowd, hiding them, illuminating Rue. She couldn’t make out their faces for the darkness but replied just the same. “Can’t help but hearin’. That some poor sufferin’ somethin’?”

As she walked, already she was holding herself straighter, prouder. It’s what they were expecting. No matter how weary she was feeling on the inside, she knew she had to walk easy, like she were floating, same as her mama used to do. Rue’s magic ought to be absolute, she knew, not come to them sleepwalking and unsure, or it wasn’t magic at all.

Rue knew they suspected already what child it was. That wrong child, born backward in a caul, a bath of black.

Jonah himself was opening the front door of his cabin and stepping out of it, and Rue did hope that Jonah, calm and right-headed, had come to silence the rumors on his child. But there was no denying that beyond him was the origin of the crying. Even his tower-tall presence in the doorway couldn’t block out the menacing sound.

“Miss Rue,” he called, and his voice was thin like river silt. “You there, Miss Rue?”

Rue did ache for Jonah’s predicament. She answered, “I’m here.”

“Sarah’s thinkin’ the baby’s took sick. She’s wantin’ you to look him over.”

Rue stepped forward, took her time going up the few sunken-down steps to the little porch. She could feel all them eyes clinging to her back like hooks. At the top step Jonah, dark-skinned and strong and sure, reached down for her and took her elbow in his hand, guiding her. His calloused palms were hard against her bared skin, rough the way only a man’s hand had cause to be, and as he moved her through the door, he gave the point of her elbow a slow rub, a caress away from their fastened eyes.

“Thank you, Miss Rue,” he said and showed her in.

The home was made up of two rooms, more than most folks could boast, though the thatch roof wept from some long-ago storm. Rue followed Jonah to the front room’s far corner where Sarah was knee bent, washing the children.

The tub was large enough to fit all three of Sarah and Jonah’s little ones, but their elder boy and girl stood outside of it, naked but dry, waiting to be washed. Their faces were damp and ruddy beneath their high-yellow skin, like they’d been crying but had exhausted that sorrow, left it to the baby to do the weeping for them.

Inside the tub the baby was on his back looking like a white island. The steam rose up from his skin in waves. He was crying, Lord, was he crying. Rue heard in it a lost cry, and it was a call she felt compelled to answer, if not with comfort then with a mournful cry of her own. In the water beside the baby a chipped cup bobbed along the ripples created by his movements. It hit the walls of the tub out of time with the high, piercing whine that had snaked its way into Rue’s dreaming.

When she leaned forward, the baby stilled his squall. He opened his eyes as if to look upon her, revealed the oil-slick black irises that had heralded his strangeness, that had prompted the name Rue had given him at his birth: Black-Eyed Bean.

Rue said to Sarah of the baby’s eyes, “They ain’t changed.” She spoke it low enough to be out of Jonah’s hearing.


There was no magic in birthing. No conjure, neither. The birth of Black-Eyed Bean had occurred one year back. Had begun no different than any other birth that Rue had known, and she had known many.

Rue just walked the women. That was it. All it took in the birthing room was good sense, the good sense that a thing hanging ought to fall, the way swollen apples brought their branches low before the apples plopped down to the ground. Shouldn’t it be the same with a baby? Let them hang low in the mama when it was time to fall, the mama being the branch near snapping.

Since the end of slaverytime, Rue had birthed every last child in that town. She knew their mamas and their daddies, too, for she was allowed into sickbeds for healing and into birthing beds alike, privy to the intimate corners of joy and suffering, and through that incidental intimacy she had come to know every whisper that was born from every lip, passed on to every ear. She knew what folks said about each other, and Lord, she knew what they said about her.

What folks said about Sarah, Jonah’s wife, Bean’s mama, was that she was beautiful, and it was so. She was a fiery woman, petite as an ember but just as dangerous, with skin light as wheat. Sarah was one of those who had sung when she walked the birth walk, had done so the two births before this, sung and moaned and sung right up to the moment that her bigger than big babies came on out to the world. Sarah had sung while she was heavy with Bean, a sonorous song with no words but so much soul. Her one hand gripped on too tight to Rue’s while the other hand beat out the tune she was singing against her sweat-slicked thigh. It was when Sarah’s squeezing got too tight, the veins standing up like blue rivers in her high-yellow hand, that Rue started her usual worrying.

Truth was Rue didn’t want nothing to do with any of that mess, the moan-singing mamas or the anxious daddies—when there were daddies—wringing their hats and their hands outside the door, or the wet and wailing babies, or, worst of all, the babies that came into the world just quiet, gone already before they ever lived, just lost promises with arms and legs and eyes for nothing. Why would she want to meddle in all of that?

As she laid Sarah down Rue had begun to think of how it all could go wrong, and if it did, what was she to do? Because just as easy as folks’ praise came, it could turn to hating. Magic and faith were fickle. Life and living were fickle. And didn’t Rue know that as well as anyone?

Still, when the time came for bearing down—the women praying with their cussing and cussing with their praying—it was in the way they looked up at her, weepy eyes filled with worship, that kept her door open. Like apples, babies came in seasons, and Rue would always tell herself in the lull, Not next year. Next year I be done.

Bean had been born in one such lull, Sarah being the fertile kind. The “Her man gotta do no more than look at her” kind, like Rue’s mama used to say of the women who could show up twice in a year with their bellies making tents of their dresses.

It was easy going year after year with Sarah. She was still young, twenty-and-some, and already she’d made two babies who had been born after no more than the usual struggle. Still she stayed smooth and sweet, and her breasts remained like two fat fruits just shy of ripe.

“He’s a’comin’,” Rue had said, laying her open palm on Sarah’s restless belly. How Rue knew even before the crown of him started pushing through that Bean would be a boy she could not account for, not in words. There was just her knowing.

Rue had rolled her rough-hewn sleeves on up—just about everything she wore and ate and owned was a gift from those mamas who had no other way to pay—and she had knelt the way she had knelt near a hundred times now, though her knees did ache for it despite her youth. Rue was nearabouts twenty also if her old master’s accounting was to be believed, not much younger than Sarah, though every day Rue felt more worn, like she were living out each one of her years double, aging out of time.

They’d grown up together, true, through slaverytime, wartime, freedomtime, but Sarah had kept herself young, and even here, at her most vulnerable hour, the sweat sitting on her skin had the audacity to glisten. In every way they were opposites—that was clear enough as Rue laid her thick dark fingers on Sarah’s thin thighs and parted them.

“Lord. Miss Rue.” Sarah sighed, praying to them both.

Rue had to love and hate equally being called Miss. She was every time reminded that she’d earned the title—and the respect of it—only after her own mama’s dying.

Afia Atakora was born in the United Kingdom and raised in New Jersey, where she now lives. She graduated from New York University and has an MFA from Columbia University, where she was the recipient of the De Alba Fellowship. Her fiction has been nominated for a Pushcart Prize and she was a finalist for the Hurston/Wright Award for College Writers. 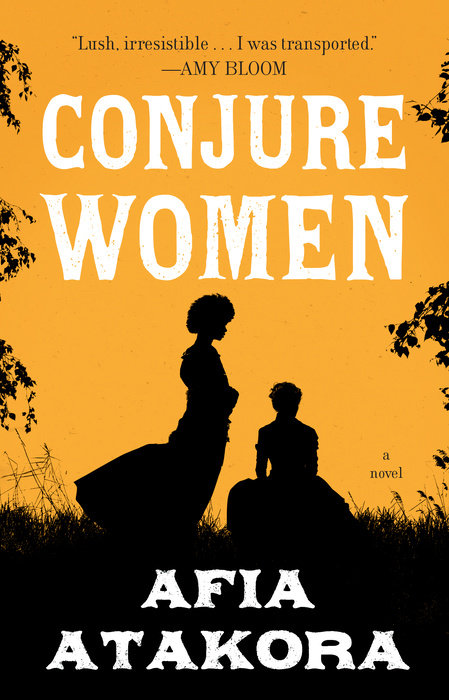