A millennium into the future two advances have altered the course of human history: the colonization of the Galaxy and the creation of the positronic brain. Isaac Asimov's Robot novels chronicle the unlikely partnership between a New York City detective and a humanoid robot who must learn to work together.

Detective Elijah Baiey is called to the Spacer world Aurora to solve a bizarre case of roboticide. The prime suspect is a gifted roboticist who had the means, the motive, and the opportunity to commit the crime. There's only one catch: Baley and his positronic partner, R. Daneel Olivaw, must prove the man innocent. For in a case of political intrigue and love between woman and robot gone tragically wrong, there's more at stake than simple justice. This time Baley's career, his life, and Earth's right to pioneer the Galaxy lie in the delicate balance.

An excerpt from The Robots of Dawn

Elijah Baley found himself in the shade of the tree and muttered to himself, “I knew it. I’m sweating.”

He paused, straightened up, wiped the perspiration from his brow with the back of his hand, then looked dourly at the moisture that covered it.

“I hate sweating,” he said to no one, throwing it out as a cosmic law. And once again he felt annoyance with the Universe for making something both essential and unpleasant.

One never perspired (unless one wished to, of course) in the City, where temperature and humidity were absolutely controlled and where it was never absolutely necessary for the body to perform in ways that made heat production greater than heat removal.

Now that was civilized.

He looked out into the field, where a straggle of men and women were, more or less, in his charge. They were mostly youngsters in their late teens, but included some middle-aged people like himself. They were hoeing inexpertly and doing a variety of other things that robots were designed to do—and could do much more efficiently had they not been ordered to stand aside and wait while the human beings stubbornly practiced.

There were clouds in the sky and the sun, at the moment, was going behind one of them. He looked up uncertainly. On the one hand, it meant the direct heat of the sun (and the sweating) would be cut down. On the other hand, was there a chance of rain?

That was the trouble with the Outside. One teetered forever between unpleasant alternatives.

It always amazed Baley that a relatively small cloud could cover the sun completely, darkening Earth from horizon to horizon yet leaving most of the sky blue.

He stood beneath the leafy canopy of the tree (a kind of primitive wall and ceiling, with the solidity of the bark comforting to the touch) and looked again at the group, studying it. Once a week they were out there, whatever the weather.

They were gaining recruits, too. They were definitely more in number than the stout-hearted few who had started out. The City government, if not an actual partner in the endeavor, was benign enough to raise no obstacles.

To the horizon on Baley’s right—eastward, as one could tell by the position of the late-afternoon sun—he could see the blunt, many-fingered domes of the City, enclosing all that made life worthwhile. He saw, as well, a small moving speck that was too far off to be made out clearly.

From its manner of motion and from indications too subtle to describe, Baley was quite sure it was a robot, but that did not surprise him. The Earth’s surface, outside the Cities, was the domain of robots, not of human beings—except for those few, like himself, who were dreaming of the stars.

Automatically, his eyes turned back toward the hoeing star-dreamers and went from one to the other. He could identify and name each one. All working, all learning how to endure the Outside, and—

He frowned and muttered in a low voice, “Where’s Bentley?”

And another voice, sounding behind with a somewhat breathless exuberance, said, “Here I am, Dad.”

“Sneak up on me like that. It’s hard enough trying to keep my equilibrium in the Outside without my having to worry about surprises, too.”

“I wasn’t trying to surprise you. It’s tough to make much noise walking on the grass. One can’t help that.—But don’t you think you ought to go in, Dad? You’ve been out two hours now and I think you’ve had enough.”

“Why? Because I’m forty-five and you’re a punk kid of nineteen? You think you have to take care of your decrepit father, do you?”

Ben said, “Yes, I guess that’s it. And a bit of good detective work on your part, too. You cut right through to the nub.”

Ben smiled broadly. His face was round, his eyes sparkling. There was a lot of Jessie in him, Baley thought, a lot of his mother. There was little trace of the length and solemnity of Baley’s own face.

And yet Ben had his father’s way of thinking. He could at times furrow into a grave solemnity that made it quite clear that he was of perfectly legitimate origin.

“You are, Dad. You’re the best of us, considering—”

“Your age, of course. And I’m not forgetting that you’re the one who started this. Still, I saw you take cover under the tree and I thought—well, maybe the old man has had enough.”

“I’ll ‘old man’ you,” said Baley. The robot he had noted in the direction of the City was now close enough to be made out clearly, but Baley dismissed it as unimportant. He said, “It makes sense to get under a tree once in a while when the sun’s too bright. We’ve got to learn to use the advantages of the Outside, as well as learning to bear its disadvantages. —And there’s the sun coming out from behind that cloud.”

“I can stick it out. Once a week, I have an afternoon off and I spend it here. That’s my privilege. It goes with my C-7 rating.”

“Sure. And when you get home, you’ll go straight to bed and lie in the dark.”

“Well, let her worry. It will do her good. Besides, what’s the harm in being out here? The worst part is I sweat, but I just have to get used to it. I can’t run away from it. When I started, I couldn’t even walk this far from the City without having to turn back—and you were the only one with me. Now look at how many we’ve got and how far I can come without trouble. I can do plenty of work, too. I can last another hour. Easy. —I tell you, Ben, it would do your mother good to come out here herself.”

“Some jest. When the time comes to take off, I won’t be able to go along—because she won’t.”

“And you’ll be glad of it. Don’t kid yourself, Dad. It won’t be for quite a while—and if you’re not too old now, you’ll be too old then. It’s going to be a game for young people.”

“You know,” said Baley, half-balling his fist, “you are such a wise guy with your ‘young people.’ Have you ever been off Earth? Have any of those people in the field been off Earth? I have. Two years ago. That was before I had any of this acclimatization—and I survived.”

“I know, Dad, but that was briefly, and in the line of duty, and you were taken care of in a going society. It’s not the same.”

“It was the same,” said Baley, stubbornly, knowing in his heart that it wasn’t. “And it won’t take us so long to be able to leave. If I could get permission to go to Aurora, we could get this act off the ground.”

“Forget it. It’s not going to happen that easily.”

“We’ve got to try. The government won’t let us go without Aurora giving us the go-ahead. It’s the largest and strongest of the Spacer worlds and what it says—”

“Goes! I know. We’ve all talked this over a million times. But you don’t have to go there to get permission. There are such things as hyper-relays. You can talk to them from here. I’ve said that any number of times before.”

“It’s not the same. We’ll need face-to-face contact—and I’ve said that any number of times before.”

“We’re not ready because Earth won’t give us the ships. The Spacers will, together with the necessary technical help.”

“Such faith! Why should the Spacers do it? When did they start feeling kindly toward us short-lived Earthpeople?”

Ben laughed. “Come on, Dad. You just want to go to Aurora to see that woman again.”

Baley frowned and his eyebrows beetled over his deep-set eyes. “Woman? Jehoshaphat, Ben, what are you talking about?”

“Now, Dad, just between us—and not a word to Mom—what did happen with that woman on Solaria? I’m old enough. You can tell me.”

“What woman on Solaria?”

“How can you look at me and deny any knowledge of the woman everyone on Earth saw in the hyperwave dramatization? Gladia Delmarre. That woman!”


“Nothing happened. That hyperwave thing was nonsense. I’ve told you that a thousand times. She didn’t look that way. I didn’t look that way. It was all made up and you know it was produced over my protests, just because the government thought it would put Earth in a good light with the Spacers.—And you make sure you don’t imply anything different to your mother.”

“Wouldn’t dream of it. Still, this Gladia went to Aurora and you keep wanting to go there, too.”

“Are you trying to tell me that you honestly think the reason I want to go to Aurora—Oh, Jehoshaphat!” 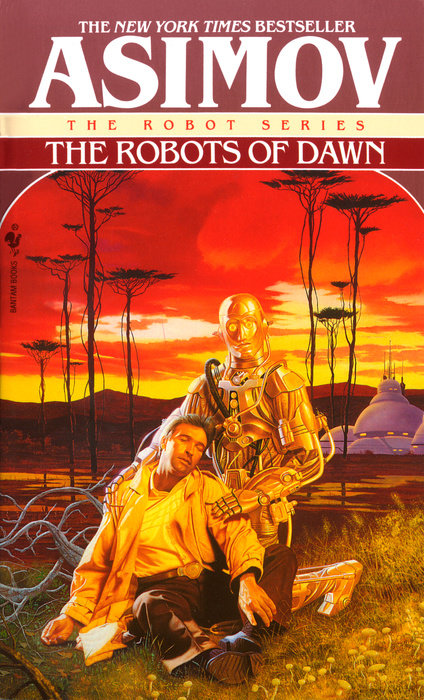