“American history comes to vivid, engaging life in this tale of two interconnected families (one white, one black) that spans from the 1950s to Barack Obama’s first year as president. . . . The complex, beautifully drawn characters are unique and indelible.”—Entertainment Weekly

Meet James Samuel Vincent, an affluent Manhattan attorney who shirks his modest Irish American background but hews to his father’s meandering ways. James muddles through a topsy-turvy relationship with his son, Rufus, which is further complicated when Rufus marries Claudia Christie.

Claudia’s mother—Agnes Miller Christie—is a beautiful African American woman who survives a chance encounter on a Georgia road that propels her into a new life in the Bronx. Soon after, her husband, Eddie Christie, is called to duty on an air craft carrier in Vietnam, where Tom Stoppard’s play “Rosencrantz and Guildenstern Are Dead” becomes Eddie’s life anchor, as he grapples with mounting racial tensions on the ship and counts the days until he will see Agnes again.

These unforgettable characters’ lives intersect with a cast of lovers and friends—the unapologetic black lesbian who finds her groove in 1970s Berlin; a moving man stranded in Portsmouth, New Hampshire, during a Thanksgiving storm; two half-brothers who meet as adults in a crayon factory; and a Coney Island waitress whose Prince Charming is too good to be true.

With piercing humor, exacting dialogue, and a beautiful sense of place, Regina Porter’s debut is both an intimate family portrait and a sweeping exploration of what it means to be American today.

Praise for The Travelers

“[A] kaleidoscopic début . . . Porter deftly skips back and forth through the decades, sometimes summarizing a life in a few paragraphs, sometimes spending pages on one conversation. As one character observes, ‘We move in circles in this life.’” —The New Yorker

“Porter’s electric debut is a sprawling saga that follows two interconnected American families. . . . Readers will certainly be drawn in by Porter’s sharp writing and kept hooked by the black-and-white photographs interspersed throughout the book, which give faces to the evocative voices.”—Booklist

An excerpt from The Travelers

Chapter 1: Pass It On

When the boy was four, he asked his father why people needed sleep. His father said, “So God could un-f*** all the things people f*** up.”

When the boy was twelve, he asked his mother why his father had left. The mother said, “So he could f*** anything that moves.”

When the boy was thirteen, he wanted to know why his father was back in their house again. His mother told him, “At forty-one, I can’t be bothered to go out and find anyone to f***.”

At fourteen, when profanity seemed to roll off his friends’ tongues like water down a leaky pipe, the word f*** held no allure for the boy. None. What. So. Ever.

At eighteen, the boy (Jimmy Vincent, Jr.) left his hometown of Huntington, Long Island, to attend the University of Michigan. Jimmy was, by all accounts, a very good student and handsome to the point of distraction. He could have had any girl he wanted, but as these things often go, he pivoted toward a wonderfully plain girl named Alice. Jimmy convinced himself that he loved Alice, and the two freshmen enjoyed tipsy, acrobatic sex. Delighted by her good fortune, Alice would hug Jimmy close to her with gratitude and say, “Oh God. Oh, me. Me? f***, f***, f***.”

After Michigan, Jimmy returned to the East Coast. He landed a job as a paralegal at a white-shoe law firm and met a tall New England girl. Jane was a medical student who could pass for a runway model. She didn’t talk dirty and people stared whenever they entered a room. Here was a girl Jimmy might have not only married but loved, even at the tender age of twenty-two. He took Jane to his parents’ house on Christmas Eve, which also happened to be the anniversary of their first year as a couple.

After a lovely dinner that Jimmy’s mother had spent all day preparing from her favorite cookbook, Jimmy’s father strolled into the living room and sat between Jimmy and Jane. He sipped Madeira port and reminisced about his childhood in rural Maine. “A hot potato will heal a stye. A raw potato under the arms works better than deodorant. Put a potato in your shoe and kiss a cold good-bye. That’s the farm boy’s dictionary right there. I left one row of potato fields for another. Long Island used to be full of potatoes, if you didn’t know.” When Jane dipped into the kitchen to check in on Jimmy’s mother, his father turned to him and said, “Son, are you blasting that? Hold on to that. Don’t f*** that up. Jimmy boy, what I could do with that.” Jimmy, who had always been called Jimmy Jr., decided instantly that he preferred the name James. When James was admitted to Columbia Law School, he drifted away from Jane.

When James was thirty-one, he made partner at his firm. He was wealthy, though not shockingly rich. James had seen heart attacks give two partners, not much older than him, the old heave-ho, so he carved out time to travel at home and abroad. It was his pleasure to date an impressive array of women. He married a pretty Middlebury girl not far from her college on a rolling blueberry hill in Vermont. James and Sigrid bought a three-bedroom apartment overlooking Central Park. His lovely wife had one flaw, a scar on her nose, a gift from a random stranger who had knocked Sigrid off her pink Schwinn bike while she was cycling with her parents in Prospect Park. “Move the f*** out the way,” the spandexed stranger had said, zipping past her on suede roller skates. This story seemed somehow prophetic to James. He loved Sigrid as much as she loved him. Sigrid gave good laughter. They had one son. They named him Rufus. And called him Ruff. Sigrid told James she would have no more. After a one-year leave of absence, Sigrid returned to her career as a copyeditor.

When he was forty, nothing stirred in James. He had read somewhere that people in their forties were miserable, but James was content to take his Ruff to baseball games at Yankee Stadium and to put the dull but profitable work of the office on hold from Friday to Monday. He found himself teaching at his alma mater, Columbia, and liking it more than the practice of law.

When he was forty-two, everything stirred in James—especially after he saw his elderly father interred in a family grave in Cabot, Maine. A colleague from the law firm pulled James aside before the funeral and said, “You’re lucky you got to know your dad as a grown man. Not all of us make it to eighty-one.” James wanted to say, f*** you. I didn’t know my dad at all. Instead, he said, “Thank you for traveling to Maine. Thank you so much.”

When James was forty-five, Sigrid told him she spent too much time alone in their apartment and she required a change. They were on their annual trip to Vermont, a few yards from the blueberry hill ski resort where he had first proposed to her. It proved a lackluster weekend. James consulted the same colleague who had attended his father’s funeral. “Menopause is a problem,” his colleague said. “Time to trade her in.” James thought this seemed a bit premature and asked his mother to weigh in. She sent James a recipe from Better Homes and Gardens. Over a plate of homemade mushroom risotto that he had spent most of the afternoon preparing, James told Sigrid, “The change of life can be your enemy or it can be your best friend.” Sigrid took their son, Rufus, and moved across the country to a Spanish-style apartment in Los Angeles. These days, she jogs most mornings on the beach and drinks Sapporo beer in the evening with her boyfriend.

When James was fifty and sleeping with Akemi, his much-younger Japanese assistant, Rufus called crying from Venice Beach. “Dad, some serious shit just went down. Would you come to L.A. and get me, please?” James was not prepared for his son’s bad news. He hung up on Rufus, but not before telling him, “I’m sorry, Ruff, but I’m trying to sleep—so I can unf*** all the things that God has f***ed up.” Akemi, which means “great beauty” in Japanese, watched James reach for the V&T pizza box on the nightstand. She noticed that he had taken to snacking in bed lately. She pulled the covers over her shoulders and would not pretend to love him. “You don’t know how to grow old here.” James told her he needed some time alone. And when Akemi left, he called Rufus.

When James was fifty-eight and happily married to fifty-six-year-old Adele, whom he loved because neither of them needed to talk much, he went to visit his aged mother at the retirement facility she now called home. His mother had white hair and white dentures and he was astonished by how vibrant her fake smile was. He had never told his mother that she was beautiful. She was the kind of woman who wouldn’t have appreciated the compliment. “How are you doing, Mom?”

His mother looked at him and said, “Enough is enough.” This statement struck James as necessary but oblique. He wondered if she was thinking about checking out. It was a coward’s way, but one he would never rule out himself. She gestured toward an old man in a shabby silk bathrobe two tables down. The old turtle was thick in conversation with a plump middle-aged female visitor who might have been his daughter or a much-younger wife. “I can’t get any peace. That old geezer is always hitting on me.”

“You still got it going on, Mom,” James said. His mother smiled and pinched his cheek. It wasn’t the same as telling her she was beautiful. But enough was enough. She pushed her chair back and told James she looked forward to seeing him the following Sunday.

When James was sixty and his Rufus, now married for several years and with twins of his own, called to ask, “How do I keep my marriage together, Dad?” James told him simply, “By not getting a divorce.” Rufus had married a black woman named Claudia Christie, which meant that James’s grandchildren, Elijah and Winona, were multiracial, biracial, part black. Everywhere James went in Manhattan, there were half-and-halves. He had once made the mistake of using the term mulatto. Rufus took him aside and explained to James that the word was verboten. Say it again and he would see his grandkids nevermore. Still, when James walked down the street with Elijah and Winona, his feelings were as mixed as their skin. “They are so stunning,” people would say. But they don’t look the first thing like me, he confessed to Adele.

Regina Porter is a graduate of the Iowa Writers' Workshop, where she was an Iowa Arts Fellow and recipient of a 2017-2018 Rae Armour West Postgraduate Scholarship. She is also a 2017 Tin House Summer Workshop Scholar. Her fiction has been published in The Harvard Review. An award-winning writer with a background in playwriting, Porter has worked with Playwrights Horizons, the Joseph Papp Theater, New York Stage and Film, the Women's Project, Woolly Mammoth Theatre Company, and Horizon Theatre Company. She has been anthologized in Plays from Woolly Mammoth by Broadway Play Services and Heinemann's Scenes for Women by Women. She has also been profiled in Southern Women Playwrights: New Essays in History and Criticism from the University of Alabama Press. Porter was born in Savannah, Georgia, and lives in Brooklyn. 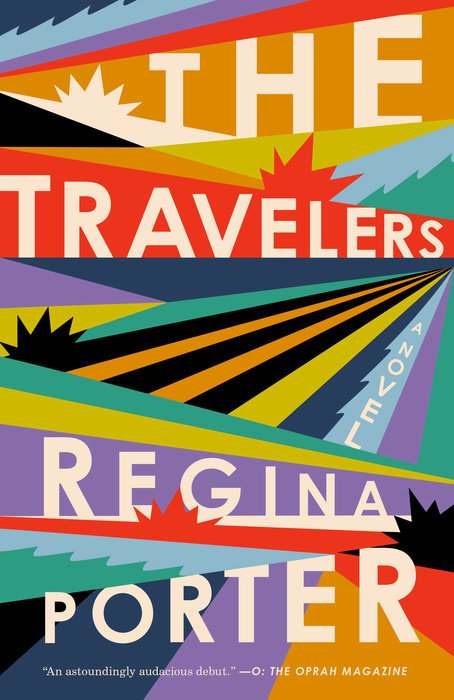