NEW YORK TIMES BESTSELLER • A longtime Nantucket resident is trying to make the best of a lonely summer. Her spirited granddaughter is learning what she wants out of life. Unforgettable surprises await them both in this magical, multigenerational novel from Nancy Thayer.

“Readers come to Nancy Thayer novels for the idyllic Nantucket beaches and lifestyle, but they stay for the characters.”—Mary Alice Monroe

Eleanor Sunderland loves living on Nantucket in a gorgeous cliffside home that has been in her family for decades. Yet this year she can’t help but feel a bit isolated, even as the island comes alive with summer travelers. Her best friend has skipped town, leaving Eleanor lonely and feeling nostalgic about her family’s weekend trips to the island, made less frequently in the years since her husband’s passing. Now her money-driven children complain and beg her to sell her beloved home for a steep payout. Hoping to kick the season off on a good note, Eleanor decides her seventieth birthday may be the perfect occasion for a much-needed reunion.

Fresh from her college graduation, Eleanor’s granddaughter, Ari, has just ended an engagement. She longs for a change of scenery and to escape from her parents’ snobbish expectations. Taking advantage of her newfound freedom, she heads to Nantucket to clear her head before graduate school, moving in with her grandmother and taking a job at the local beach camp. As she watches Eleanor begin to form a bond with an old acquaintance, Ari herself becomes smitten with a friend’s charming older brother. But just as grandmother and granddaughter fall into a carefree routine, a few shocking discoveries throw them off course.

Eleanor and Ari learn to lean on each other through every new challenge they face in life and love, in this tale filled with Nancy Thayer’s signature Nantucket magic.

An excerpt from Family Reunion

Summer was almost here! Eleanor Sunderland sat on her deck looking out at the eternal Atlantic, savoring the view. Above in the sky, diamond-­tipped stars were appearing, one by one, and Eleanor could hear the gentle shush of the waves on the shore far below her. The scent of long, sunny days drifted in with the light, salty breeze from the sea.

It was late May, and if she tilted her head, she could scan down the row of houses on the bluff. She could see which ones had lights on, which summer people had arrived early. She felt both invaded in her happy seclusion and grateful for the company. The winters here could be lonely.

The air was chilly. She wore a long-­sleeved dress, but still she shivered, and when her cat flicked his tail against her leg, she knew it was time to go inside, to give Shadow his treat, to prepare for bed. She had never liked going to bed. When she was outside by the ocean, Eleanor felt no age at all, but in her house all the new and necessary bits of technology made her feel very much her age.

She stood up—­too fast. Her blood pressure had trouble rising, her doctor told her, because she was so tall. Never one to enjoy being told what to do, it was a nuisance to be seventy years old and bossed around by her body. She waited, and the dizziness faded, and she went through the sliding glass door into the kitchen to give Shadow a small clump of Feline Feast. She checked the lock on the back door, out of habit, and made her way through the large house, turning off lights as she went. Upstairs, she brushed her teeth and changed into her light cotton nightgown and folded back the light quilt and settled against her pillows.

“Shall we watch some television, Shadow?” she asked the cat, who had eaten and now sat purring at the end of the bed.

She picked up the long black remote control, which made her think of the black monolith in 2001: A Space Odyssey. It was magical, but it was surely going to give her carpal tunnel syndrome or whatever it was called. Her thumb hurt from pressing the buttons. Yes, she knew she could use voice commands to get to a certain channel: PBS. CNN. She knew about the ridiculously named Xfinity, another sign that the English language was being hijacked by idiots, but once she was on the channel—­or what was it called now? Stream?—then she had to push a button to go up and down and across the rows of offerings, often accidentally landing in a Japanese anime series like The Legend of Korra. She pressed the blue button that allowed voice commands. It made a strange, unpleasant noise. The television screen said, Something is wrong. Well, she knew that!

“What are we going to do, Shadow?” Eleanor asked.

“My hair is still as thick as yours,” Eleanor told the cat, who obviously didn’t care, but it was true. She had been graced with thick dark hair, and so far age had not thinned it out, even though it had streaked the black with white and wreaked havoc on the rest of her body.

A pile of books lay on the bed next to her in all their glorious colorful jackets. New books she’d bought at Mitchell’s, because she loved that bookstore dearly, and also a few books from the library. She always gave herself some time to browse the library shelves to check out new reads she hadn’t heard about and wasn’t sure she would want to stick with. Like agreeing to only coffee on a first date, rather than an entire meal.

But she’d spent much of her day reading, and she wanted the effortless zoning out that television provided. She couldn’t tolerate being with her own thoughts for one more minute. She needed distraction.

Earlier today, she had walked from her house on the bluff to Martha’s house in town. Martha was her best friend. They’d gone through weddings, childbirth, adolescence, and empty nests together. Martha’s marriage had been as happy as Eleanor’s was miserable, and it was Martha’s laughter and advice that had gotten Eleanor through life with her wildly handsome, indescribably tense, strict, virtuous husband, Mortimer Radcliffe Sunderland. Now deceased.

Three years ago, Mortimer died suddenly, in his sleep. During the reception after the funeral, Eleanor had whispered to Martha, “I’m surprised Mortimer would do anything suddenly,” and they had covered their mouths with their hands and giggled like little girls.

But this morning, over coffee, Martha announced, “Eleanor, guess what! Al and I are leaving this week to take a three-­month cruise of the Mediterranean!”

Eleanor felt faint. The floor seemed to slip beneath her feet. “What?”

“I know it’s a surprise. I didn’t mean to spring it on you like this.”

Eleanor sat there, quietly, furiously, trying not to feel she’d just been stabbed in the heart by a traitor. After a moment, she regained her self-­control.

“Gosh, what a surprise,” Eleanor said in her normal voice. “I had no idea you were planning a cruise.”

Martha blushed. “We didn’t really plan it. We sort of decided on the spur of the moment. We’ve splurged on first-­class tickets. First-­class everything, because Al will turn seventy in June, and we decided it’s time to spoil ourselves.”

“How wonderful,” Eleanor announced, lying through her teeth.

“I know! Eleanor, let me show you our ship! Our itinerary! Hang on, I’ll get Al’s laptop.”

So Eleanor had to sit there going “Ooh” at the shiny photos of Greek islands rising out of deep blue seas, elegant staircases to posh first-­class suites, and a formal dining room with white tablecloths, floral centerpieces, waiters dressed like naval officers in handsome uniforms, and buffets of food from around the world.

“Al has to take a tux,” Martha whispered in awe. “I have to buy some gowns. Gowns, Eleanor! One night we’ll sit at the captain’s table!”

Full of chlorine and other people’s pee, Eleanor almost said, but bit her tongue.

Instead, she said, “The ship must be enormous if it has a swimming pool.”

Eleanor stopped listening. She was happy for her best friend. She was simply sad for herself. Summer was always a difficult time on the small island, when thirty thousand or more summer people arrived to share the pleasures of Nantucket. Contractors honked at any car with a New York license plate, families on bikes pedaled blithely past stop signs, and you never saw anyone you knew in the crowded grocery store. Complaining with Martha was one of her few summer joys, and this summer she would be deprived of that.

“Now you’re going to have to get a cellphone,” Eleanor said triumphantly. Martha was kind of a technophobe, using a landline telephone and her old Kodak camera.

“Well, I thought of that,” Martha said. “But you know how I hate those things. We’ve decided that, if necessary, I’ll use Al’s, but really we’ll only need to check on the children, and they’re all grown up so we don’t even need to do that.”

Eleanor restrained herself from rolling her eyes—­did anyone even send postcards anymore?

“Please do.” Forcing herself to be cheerful, she said, “Oh, Martha, I hope you have a spectacular time!”

She had been sad and hurt and angry when she left Martha’s house, because it didn’t seem like Martha not to tell Eleanor about something so important before.

Now she tossed the remote control on the quilt. “Alexa,” she said, “play Bob Seger.”

As his rough and growly voice filled the room with “Against the Wind,” Eleanor snorted, because if anything was against the wind it was her old house on the bluff.

Then came the words: “We were young and strong,” and Eleanor couldn’t help it. She burst into tears. 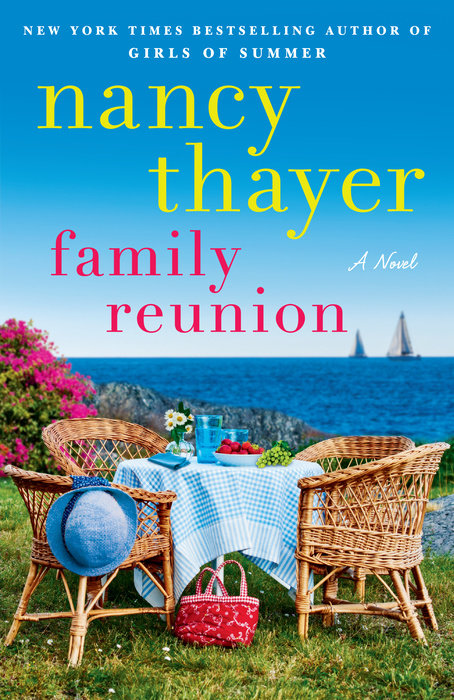