NEW YORK TIMES BESTSELLER • A desperate manhunt ensues for a killer who preys upon his victims’ minds—just before he claims their lives—in this blockbuster novel from #1 bestselling author Lisa Gardner.

These are the questions that haunt FBI Special Agent Pierce Quincy. The police say his daughter’s death was an accident. Quincy will risk everything to learn the truth—and there’s only one person willing to help. Ex-cop Rainie Connor had once been paired professionally—and personally—with the brilliant FBI profiler. He helped her through the darkest days of her life.

Now it’s time for Rainie to return the favor. But this killer is like none these two hard-boiled pros have ever encountered. This twisted psychopath has an insatiable hunger for revenge...and for fear. As the clock ticks down to one unspeakably intimate act of vengeance, the only way Rainie can unmask this killer is to step directly in his murderous path. She will become a murder waiting to happen. She will be . . . the next accident.

An excerpt from The Next Accident


Monday afternoon, private investigator Lorraine Conner sat hunched over her paper-swamped desk, punched a few more numbers into her old, cagey laptop, then scowled at the results shown on the screen. She tried the numbers again, got the same dismal results, and gave them the same dark look. The Quicken-generated budget, however, refused to be intimidated.

Damn file, she thought. Damn budget, damn heat. And damn circular fan that she’d purchased just last week and was already refusing to work unless she whacked it twice in the head. She stopped now to give it the requisite double-smack and was finally rewarded with a feeble breeze. Christ, this weather was killing her.

It was three in the afternoon on Monday. Outside the sun was shining, the heat about to crest for another record-breaking July day in downtown Portland, Oregon. Technically speaking, Portland didn’t get as ridiculously hot as the East Coast. Nor, in theory, did it get as humid as the South. These days, unfortunately, the climate didn’t seem to realize that. Rainie had long since traded in her T-shirt for a white tank top. It was now plastered to her skin, while her elbows left rings of condensation on the one clear spot on her desk. If it got any hotter, she was taking her laptop into the shower.

Rainie’s loft offered central air, but as part of her “belt-tightening” program, she was cooling her vast, one-room condo the old-fashioned way — she’d opened the windows and turned on a small desk fan. Unfortunately, that little matter of heat rising was conspiring against her. The eighth-floor condo wasn’t magically getting any cooler, while the smog content had increased tenfold.

Bad day for belt-tightening programs. Especially in Portland’ s trendy Pearl district, where iced coffee was served on practically every street corner, and all the little cafés prided themselves on their gourmet ice cream. God knows the majority of her upwardly mobile neighbors were probably sitting in Starbucks right now, basking in air-conditioned glory while trying to choose between an iced Chai or nonfat mocha latté.

Not Rainie. No, the new and improved Lorraine Conner was sitting in her trendy loft in this trendy little neighborhood, trying to decide which was more important — money for the Laundromat, or a new carburetor for her fifteen-year-old clunker. On the one hand, clean clothes always made a good impression when meeting a new client. On the other hand, it didn’t do her any good to land new cases if she had no means of carrying them out. Details, details.

She tried a fresh round of numbers in her Quicken file. Showing a gross lack of imagination, the file spit back the same red results. She sighed. Rainie had just passed the Oregon Board of Investigator’s test to receive her license. In the good news department, this meant she could start working for defense lawyers as a defense investigator, à la Paul Drake to their Perry Mason. In the bad news department, the two-year license cost her seven hundred bucks. Then came the hundred dollars for the standard five-thousand-dollar bond to protect her against complaints. Finally, she got to fork over eight hundred dollars for a million dollars in errors-and-omissions insurance, more CYA infrastructure. All in all, Conner Investigations was moving up — except she was now out sixteen hundred dollars and feeling the crunch.

“But I like eating,” she tried to tell her computerized business records. They didn’t seem to care.

A buzzer sounded. Rainie sat up, dragging a hand discouragingly through her hair, while she blinked twice in surprise. She wasn’t expecting any clients today. She peered into the family room, where her TV was tuned in to the building’s security cameras and now broadcasted the view from the main entrance. A well-dressed man with salt-and-pepper hair stood patiently outside the locked front doors. As she watched, he buzzed her loft again. Then he glanced up at the camera.

Rainie couldn’t help herself. Her breath caught. Maybe her heart even stopped. She looked at him, the last person she expected to see these days, and everything inside her went topsy-turvy.
She ran a hand threw her newly shorn hair again. She was still getting used to the look, and the heat made it flip out like a dark, coppery dish mop. Then there was her tank top — old and sweat-soaked. Her denim shorts, ripped up, frayed, and hardly professional. She was just doing paperwork today, no need to dress up, and oh God had she put on deodorant this morning, because it was really hot in here and she could no longer tell.

Supervisory Special Agent Pierce Quincy remained gazing up at the security camera, and even through the grainy image, she could see the intent look in his deep blue eyes.

Rainie’s scattered thoughts slowed. Her hand settled at the hollow of her throat. And she studied Quincy, nearly eight months since she’d last seen him and six months since even the phone calls had stopped.

His eyes still crinkled in the corners. His forehead still carried deep, furrowed lines. He had the hard, lean features of a man who spent too much time dealing with death, and damn if she hadn’t liked that about him. Same impeccably tailored suit. Same hard-to-read face. There was no one quite like SupSpAg Quincy.

He pressed the ringer for a third time. He wasn’t going away. Once he made up his mind about something, Quincy rarely let it go. Except her...

Rainie shook her head in disgust. She didn’t want to think that way. They’d tried, they’d failed. Shit happened. Whatever Quincy wanted now, she doubted it was personal. She buzzed him in.

Eight floors later, he knocked at her front door. She’d had time for deodorant, but nothing in the world could save her hair. She swung open the door, balanced one hand on her denim-clad hip, and said, “Hey.”

She waited. The pause drew out, and to her satisfaction, Quincy broke first.

“I was beginning to worry that you were out on a case,” he said.

“Yeah well, even the good guys can’t be working all the time.”

Quincy raised a brow. His dry tone made her positively nostalgic as he said, “I wouldn’t know anything about that.”

She smiled in spite of herself. Then she swung the door open a bit wider, and truly let him in.

Quincy didn’t speak right away. He walked around her loft casually, but Rainie wasn’t fooled. She’d blown the majority of her savings on the loft just four months ago and she knew the kind of impression it made. The eleven-foot ceilings of a converted warehouse space. The open, sunny layout with nothing but a kitchen counter and eight giant support columns to came out four simple spaces: kitchen, bedroom, family room, and study. The huge expanse of windows, filling an entire wall with the original 1925 paned glass.

The woman who had owned the condo before Rainie had finished the entranceway with warm red brick and painted the living space with rustic shades of adobe and tan. The result was the shabby chic look Rainie had read about it magazines, but knew better than to try on her own. The loft had nearly bankrupted her, but the minute she’d seen it, she couldn’t have gone without it. It was fashionable, it was upscale, it was beautiful. And maybe if the new and improved Lorraine Conner lived in this kind of place, she could be that kind of person.

Rainie scrutinized his face. He seemed sincere. She grunted a reply.

“I didn’t know you did sponge painting,” Quincy commented.

“I cut off the length and sold it to buy the loft, of course.”

“You always were clever. Not organized, as I can tell by looking at the desk, but clever.”

Quincy paused, then smiled grudgingly. “I see you still know how to cut to the chase.”

“And you still know how to dodge a question.”

She arched a brow, signaling that too wasn’t an answer. Then she propped up her hip on the edge of her desk, and knowing Quincy as well as she did, she waited.

Lisa Gardner is the #1 New York Times bestselling author of twenty suspense novels, including The Neighbor, which won Thriller of the Year from the International Thriller Writers. An avid hiker, traveler, and cribbage player, she lives in the mountains of New Hampshire with her family. 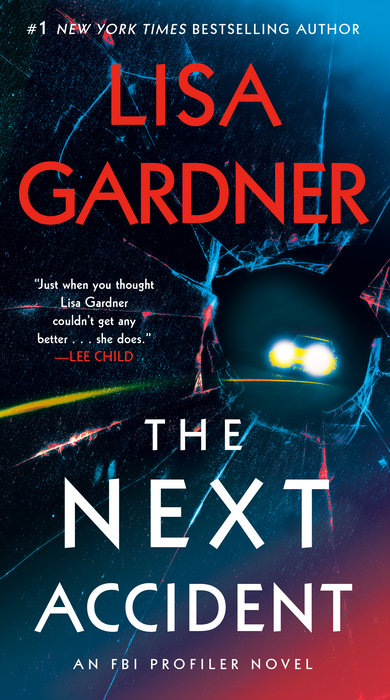