A SKIMM READS PICK • “This will be one of your favorite books of all time.”—Amy Schumer

In a haze of vape smoke on a rare windy night in L.A. in the fall of 2016, Chelsea Handler daydreams about what life will be like with a woman in the White House. And then Donald Trump happens. In a torpor of despair, she decides that she’s had enough of the privileged bubble she’s lived in—a bubble within a bubble—and that it’s time to make some changes, both in her personal life and in the world at large.

At home, she embarks on a year of self-sufficiency—learning how to work the remote, how to pick up dog shit, where to find the toaster. She meets her match in an earnest, brainy psychiatrist and enters into therapy, prepared to do the heavy lifting required to look within and make sense of a childhood marked by love and loss and to figure out why people are afraid of her. She becomes politically active—finding her voice as an advocate for change, having difficult conversations, and energizing her base. In the process, she develops a healthy fixation on Special Counsel Robert Mueller and, through unflinching self-reflection and psychological excavation, unearths some glittering truths that light up the road ahead.

Thrillingly honest, insightful, and deeply, darkly funny, Chelsea Handler’s memoir keeps readers laughing, even as it inspires us to look within and ask ourselves what really matters in our own lives.

Praise for Life Will Be the Death of Me

“You thought you knew Chelsea Handler—and she thought she knew herself—but in her new book, she discovers that true progress lies in the direction we haven’t been.”—Gloria Steinem

“I always wondered what it would be like to watch Chelsea Handler in session with her therapist. Now I know.”—Ellen DeGeneres

“I love this book not just because it made me laugh or because I learned that I feel the same way about certain people in politics as Chelsea does. I love this book because I feel like I finally really got to know Chelsea Handler after all these years. Thank you for sharing, Chelsea!”—Tiffany Haddish

An excerpt from Life Will Be the Death of Me

Where Have I Been All My Life

I don’t remember the actor, and I don’t remember the movie, but I remember it was five o’clock in the afternoon and I had just taken a couple hits off my vape pen. I needed to load my Pix account, which held pre-released movies that I was expected to screen before a star of one of the movies was a guest on my Netflix talk show. I was sitting on one of my overpriced chaise longues, the kind that celebrities and Russians purchase for their bedrooms, when I found myself once again unable to convert the TV that descends from the ceiling from Apple TV to Pix. Rich people have descending smart televisions. The idea is that they descend silently and gracefully from the ceiling, but because I am nouveau-riche rich, mine sounds more like a helicopter landing. I’d like to blame my inability to change the mode of my television to Pix on the fact that I was stoned, but that would be a lie; I’d be even less capable if I was sober.

I called my assistant Brandon at his house, to tell him to tell my other assistant, Tanner—who was downstairs in my house—to come upstairs and help me with the television. I hung up the phone. I looked down at the table and saw the vape pen. How many more hits of marijuana would I need to get through this movie?

I knew things had hit a new low—or high, depending on how you looked at the situation. I picked up the iPad that controls the TV along with everything else in my house—from the window shades to the exterior lights in my backyard, to my pulse, probably—and tried to pretend that I was troubleshooting, so that Tanner would think I had at least tried to figure it out on my own—as if that had ever happened before.

How did I become so useless? And how many assistants did I actually have? Answer: two. Brandon and Tanner. Brandon is gay and has an incredible attention to detail. Tanner is straight, and before he met me, he thought that the Four Seasons was a weather pattern. Before I met Tanner, I thought Venmo was an online liquor store.

Tanner was now upstairs standing behind the chaise I was sitting on. I wondered if he could smell the weed I’d just smoked, and if so, what did he think of me? Did he realize that most television hosts don’t even make the time to watch movies and TV shows to prepare for each of their upcoming guests? Did he understand that I was a consummate professional who went to great lengths to get ready for my show? Or did he think that I was just some rich, lucky, white bitch who continued to fall upward? No, that wasn’t quite right: I doubt he was thinking in terms of race. Two white people surely weren’t thinking about skin color. I was the one thinking that.

I didn’t want to watch another stupid f***ing movie that I didn’t care about. And I really didn’t want to interview another action star bloviating about his motivation for playing a half man, half mermaid. I just didn’t care, and I wasn’t doing anyone any favors by pretending that I did.

I remember coming home a couple of weeks before the 2016 election on a windy fall night—which for Los Angeles is rare. Anytime there’s weather in Los Angeles, even rain, it’s exciting—the constant sunshine can start to grate on your nerves. I went up to my bedroom, opened up my sliding glass doors, grabbed my vape pen, and turned on some Neil Young. I lay on my bed in the dark, watching the wind blow my bedroom drapes around, hearing the ruffling of the leaves, and watching the lanterns that hang from my backyard trees swinging into each other, thinking, If there’s an electrical fire, I hope the dogs will at least bark to wake me up, but overall, my thought was: This is f***ing awesome. This is exactly what I’d hoped adulthood would be.

No kids, no husband, no responsibilities—just a TV show on Netflix and whatever else I felt like doing, whenever I felt like doing it. Not trapped, not stuck, not dependent on a single person but myself—free to be you and me. I couldn’t believe how lucky my life had turned out, how many of my dreams had come true, and also my good fortune in being alive during this time in history—the year we were going to elect our first female president.

I suppose I could blame my state of mind on the election of Donald Trump—so I will. I have the Trump family and their horrifying personalities and veneers to thank for my midlife crisis. Along with more than half the population—of the world—I couldn’t grasp how, in this day and age, we elected a man who insulted Mexicans and women and Muslims and veterans and disabled people and everyone else he has insulted since. The contrast in decency between Barack Obama and Donald Trump was too much for me to bear—like electing Snooki to the Senate. Now people were seriously talking about Dwayne “the Rock” Johnson running for president. How on earth did we get here? Although, if I’m being honest, at that point in time—or at any other time during the entire Trump presidency—I would have preferred an actual rock.

Chelsea Handler is a writer, comedian, producer, TV host, activist, and the author of five consecutive New York Times bestsellers. She hosted the late-night talk show Chelsea Lately on the E! network from 2007 to 2014 and released a documentary series, Chelsea Does, on Netflix in January 2016. In 2016 and 2017, Handler hosted the talk show Chelsea on Netflix. She is at work on a documentary about white privilege that will be released by Netflix in 2019. 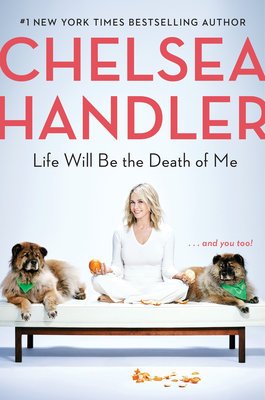