Confessions of an Urban Beekeeper

A year in the life of New York City’s premier beekeeper, who chronicles his adventures and the quirky personalities he encounters while spreading his infinite knowledge of and passion for the remarkable honey bee

“Coté’s charming and poignant essay collection delivers the entertainment and smarts required to make real change in how we look at our planet, and ourselves.”—Andrew Zimmern

From the humble drone to the fittingly named worker to the queen herself—who is more a slave than a monarch—the hive world, Andrew Coté reveals, is full of strivers and slackers, givers and takers, and even some insect promiscuity (startlingly similar to the prickly human variety). Written with Coté’s trademark humor, acumen, and a healthy dose of charm, Honey and Venom illuminates the obscure culture of New York City “beeks” and the biology of the bees themselves for both casual readers and bee enthusiasts.

Coté takes readers with him on his daily apiary adventures over the course of a year, in the city and across the globe. In Manhattan, among his many duties, he is called to capture swarms that have clustered on fire hydrants, air-conditioning units, or street-vendor umbrellas. Beyond maneuvering within a metropolitan populace as frenzied as the bees’, Coté is able to escape from the hive mind and the rigors of city dwelling with his philanthropic, international approach to apiculture. Annually, he travels to regions across the world with his organization, Bees Without Borders, where he teaches beekeepers how to increase their honey yield and income via beekeeping endeavors. For Coté, a fourth-generation beekeeper, this is a family tradition, and this personal significance pervades his celebration of the romance and mystery of bees, their honey, and the beekeepers whose lives revolve around these most magical creatures.

An excerpt from Honey and Venom

I bleed honey. It runs deep in my veins.

I am a fourth-generation beekeeper, intimately familiar with the world of honey bees and the aberrations of those who maintain them.

Early on, I honed my craft as a beekeeper on the array of hives that surrounded my boyhood home in Fairfield County, Connecticut. But today, aside from my apiaries in the suburbs and countryside surrounding Gotham, my turf includes skyscrapers, community gardens, ancient cemeteries, international territory, and other hidden pockets of New York City. My apiaries top, or have topped, some of New York’s most iconic buildings and locales, from the Museum of Modern Art to the Waldorf Astoria. My bees buzz above the lawn of the United Nations and the cemeteries of Green-Wood in Brooklyn, Woodlawn in the Bronx, and St. Patrick’s Old Cathedral down on Little Italy’s Mulberry Street. They preside atop Industry City in Sunset Park and flitter over a ballet school near the Flatiron. They hover and dart above churches and synagogues, secondary schools and restaurants. The apiary I installed and tend above the seventy-second floor of a hotel near Central Park is the highest in the world, though admittedly not the most productive. While it is certainly a thrill for me to work with these industrious, extra-high-flying honey bees at such lofty altitudes, I love working with those at ground level just as much—although I do envy the spectacular views of the city dwellers. All of these bees serve restaurants, grocery stores, my own honey stand, and, of course, first and foremost, themselves.

Beekeeping—and for beeks like me, urban beekeeping—is a passion for those who practice it. Worldwide, more and more people are drawn to this bewitching and satisfyingly messy work for environmental and conservation reasons, for the joy of producing something on their own, and because honey is, well, delicious.

One thing I love about beekeeping is how it brings people together in combinations one could not otherwise imagine. Because of it, I’ve cultivated the most unexpected acquaintances and friendships both close to home and abroad. I’ve worked with Parisian beekeeper Marie Laure Legroux on hives that have been on the grounds of the Luxembourg Gardens since 1856 (though Marie has not been there quite so long), and others with Nicolas Geant atop the Grand Palais des Champs-Élysées and Notre-Dame (the three atop Notre-Dame, it should be noted, survived the tragic fire that gutted the building in 2019). I’ve harvested from log hives in rural Samburuland in Kenya, helped prepare bees for overwintering in small Moldovan villages, relocated apiaries in immediate post-earthquake Port-au-Prince, Haiti, and helped Fijian beekeepers increase their profitability through targeted marketing of honey to honeymooners. Friendships were often forged along with those endeavors, many of which continue to this day.

Thoreau says that keeping bees is like directing sunbeams. Cupid supposedly dipped his arrows in honey before he set them flying. My favorite may be the words of Victor Hugo, who wrote “Life is the flower for which love is the honey.” I think the Frenchman was onto something there. I adore these magical little creatures—from my rusticating hives in the countryside to their cosmopolitan cousins atop Manhattan high-rises. I love my bees and I love how I came to be a beekeeper.

I learned beekeeping from my father, Norm, who is distinctly humble and soft-spoken. A wiry fellow who as of this writing is in the latter portion of his eighth decade, he was a navy man poised on a ship off the coast of Cuba during the Cuban missile crisis. After his days on the water dried up, he turned to fire, serving for more than three decades as a lieutenant in the Norwalk fire department. In the days following the attacks of 9/11, he was part of a dogged rescue and recovery team digging fruitlessly in the pile of rubble that was once the World Trade Center. But like many men of action, Norm’s manner is calm, patient, and distinctive.

His mother, Aldea, grew up on a farm with honey bees in Quebec, where she, along with her siblings and father, managed colonies of the nectar-gathering empresses of the sky. When she moved to the United States, she left the bees and the farm behind, giving rise to a brief period of dormancy for beekeeping in our lineage until Norm picked up the baton—or the bee smoker and hive tool. Whatever else we are, both my brother, Mike, and I are also now beekeepers, as are my brother’s children; I hope mine will be as well. Through our charity, a 501(c)(3), Bees Without Borders, my father and I have traveled the world as a team carrying on the family tradition, teaching, listening, and working with bees while navigating our own modest bee business at home. And beekeeping for the beekeeper is a lot like it is for the honey bees themselves, or at least can be. Overlapping generations working together. Cooperative brood care. Division of labor. Mutual love of honey. We all have a lot in common.

In New York City, a place where passion and competition abound, there were only a couple of dozen beehives registered when beekeeping became legal in 2010 (although many more went unregistered). About a decade later, there are hundreds of registered beehives in the city with an estimated hundreds more unregistered. While most, myself included, would say that more beehives is a good thing, the zeal for beekeeping has led to a situation that any New Yorker, bee enthusiast or not, will find unsurprising: The business of beekeeping can be cutthroat. Many would correctly describe the act of beekeeping itself as humbling, serene, instructive, and even meditative. But it can also be rife with rivalries and animosity, turf wars and hostile takeovers. Sheepishly, I confess to once—but happily no longer—being among the most guilty of those megalomaniacs; there’s only so much real estate for the bees, and there’s a finite supply of nectar where I practice the ancient art. At long last the bees have taught me humility. Still, from time to time there are conflicts. The honey of a crowded hive is defended by a thousand stings. Or, at least, so say the Olney Hymns.

For all the competition, occasional bouts of unpleasantness, and stings—from bees and humans alike—there are many things I very much enjoy about being part of an urban beekeeping community. Living in Manhattan, I’ve had occasional brushes with celebrities, which are nearly always exciting and good fodder for stories—like the time I met and had a friendly chat with Denzel Washington, or when Natalie Portman walked off smiling, clutching a jar of my whipped honey. Aziz Ansari, the world-famous comedian, saw no shame in pragmatically bargaining five dollars off his purchase, and it was exciting when Uma Thurman, herself a beekeeper at the time, bought one of our honeycombs.

Setting up shop and hawking honey at the Union Square Greenmarket in lower Manhattan has introduced me to many intriguing people, including famous chefs, actors, and artists. Padma Lakshmi regularly comes by, and we talk about bees and life. Martha Stewart, whose bees my father tended for twenty years, comes by on occasion. Alec Baldwin and I have discussed the trials and tribulations of being a father later in life. David Schwimmer and I laughed about our uncanny resemblance when we were in our twenties, “which I hope was a compliment to us both,” he said, certainly joking, since neither of us were pinups.

Hugh Jackman and I conversed for ten minutes without my knowing who he was (nor, to be fair, he I); he was in the company of celebrity chef Jean-Georges Vongerichten and, the market being a foodie mecca, I thought that all of the hangers-on and cameras were there for Chef Jean-Georges. Hugh and I talked about distinct Australian honey varieties, like Leatherwood from Tasmania, and how on Hog Bay, Kangaroo Island, the Ligurian Bee Sanctuary continues to breed the last remaining pure Ligurian honey bee stock in the world. As he departed, having purchased a bottle of buckwheat honey, I asked him what he did for a living. “I do some acting, singing. . . . I’m doing something on Broadway now,” he replied, very matter-of-factly and without a trace of amusement at my ignorance of his identity. “Excellent! Good luck with that!” I told him sincerely. When they were able to speak again, the two women who work with me informed me that I had been speaking with a megastar best known at the time for portraying Wolverine in the X-Men series.

Andrew Coté is New York City’s most well-known beekeeper. A fourth-generation apiarist, he is founder of the New York City Beekeepers Association, executive director of the nonprofit Bees Without Borders, polyglot, Fulbright scholar, black belt in aikido, and former college professor. Coté and his bees have been featured on The Martha Stewart Show, CNN, CBS, Cake Boss, Dr. Oz, Nightline, Good Morning America, and Today, and in The Wall Street Journal, The Atlantic, The New York Times, HuffPost, and many other news outlets around the world. Coté also runs Andrew’s Honey out of the NYC Union Square Greenmarket.

Confessions of an Urban Beekeeper 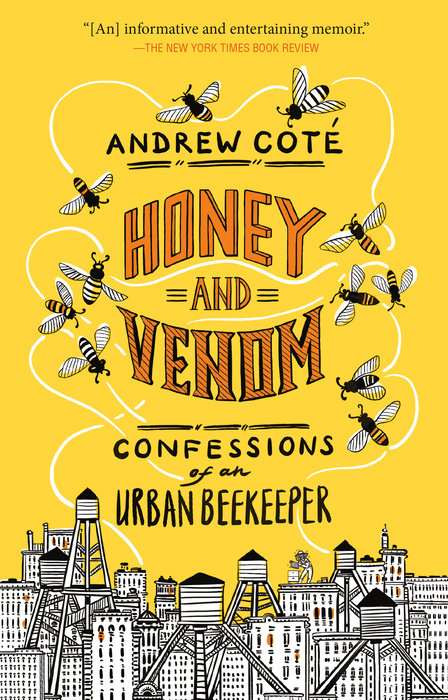