“[The] Ukrainian American heroine of this sweet-bitter debut is a wisecracking fatalist who can be counted on to say the inappropriate thing, a tendency that becomes more pronounced as doomed crushes and family crises pile up on the road to adulthood.”—O: The Oprah Magazine

When Oksana and her family move from the Ukraine to Florida to begin a new American life, her physicist father delivers pizza at night to make ends meet, her cranky mother sits at home all day worrying, and her flamboyant grandmother relishes the attention she gets from men. All Oksana wants is to be as far away from her family as possible, to have friends, and to be normal—and though she constantly tries to do the right thing, she keeps getting in trouble.

As she grows up, she continues to misbehave, from somewhat accidentally maiming the school-bus bully, to stealing the much-coveted key to New York City’s Gramercy Park, to falling in love with a married man. After her grandmother moves back to Ukraine, Oksana longs for the motherland that looms large in her imagination but is a country she never really knew.

When she visits her grandmother in Yalta and learns about her romantic past, Oksana comes to a new understanding of how to live without causing harm to the people she loves. But will Oksana ever quite learn to behave?

“What luck for readers that Oksana can’t behave! Little devil, infinite imbecile, poor futureless child—all the names her displaced, loving family give to her as she crashes and burns and wanders the wilderness of her inheritance, fit perfectly. As outrageous as she is, as funny and as awful as she can be, though, in Oksana, Maria Kuznetsova has also created a character of great passion and depth—of tragedy, even, too—the very sort that populate the stories of Chekhov and Tolstoy, the poems of Anna Akhmatova, and all the other Russian writers Oksana looks to for comfort and company and some sort of bearing in this absurd world. This novel is a stark, hilarious delight.”—Paul Harding, Pulitzer Prize–winning author of Tinkers

An excerpt from Oksana, Behave!

After I asked what America would be like, my grandmother sighed philosophically and released a mouthful of smoke out the passenger window. “America, Ukraine, it’s all the same in the end,” Baba said, as her brother, Boris, drove us to the station. “We just need a change, that’s all. Some things will be better in America, and some will be worse,” she declared, taking another drag on her cigarette. “But think of all the men!”

I was only seven, so this wasn’t much of a selling point. Mama and Papa were quiet on either side of me in the backseat, offering no consolation or clarification. For the last few months, they had stayed up late whispering about leaving Kiev, and during the day, they left to say goodbye to friends until it was our turn to go, when their remaining friends came over to say goodbye to us. I didn’t really know why we were leaving. All I knew was that we were at the start of a long journey that would end in a place called Florida, a land of beaches and theme parks. And now we were speeding by the Dnieper River and the rolling hills and maple trees I couldn’t imagine living without, even on this gray November day.

“In a while, foolish child,” said Baba, “when our hearts are healed and hungry for this place once more.”

“Will our hearts be healed by New Year’s?” I asked. I had been looking forward to my school’s New Year’s party, where the teachers let me run around without punishing me, and where I could steal a few tangerines and chocolates when they weren’t looking.

“Do not be sad, Oksana,” Papa said, though he seemed quite sad himself. “Kiev is in your soul. You can return there anytime you want.” He tapped my heart for emphasis.

“Dearest God I don’t believe in,” Mama said, shaking her head. “What did I do to deserve such a silly child? Who cares about Kiev, darling? You have your family with you, lucky fool. Everything you need is right here.”

Baba pointed her cigarette at me. “You know what your problem is?” she said.

“Having an annoying family?” I asked.

“You ask too many questions. What’s there to know, little idiot? You are born, you have some laughs and a rendezvous or two, and then you fall into the void. Just try to enjoy the ride, darling,” she added before turning away.

I didn’t see it at the time, but everyone’s conduct during the rest of the drive captured their distinct approaches to life. There was Papa watching the Dnieper flow by, with longing and misty eyes. Mama with her hands on her lap, looking forward and wishing we’d hurry up already. Baba fluffing her bright-red hair and scoping out the romantic prospects on the street. Her brother, Boris, driving with a smirk, not caring about the lipstick on his collar, the high heel in his backseat, or about staying behind.

And then there was me, always in the dark, not knowing that this was the last day all of us would ever spend in Kiev together or that Florida would just be the first stop in a series of places I would try to call home—stomping and howling, desperate for someone to tell me what would happen next.

I Pledge Allegiance to the Butterfly

We had been living in Gainesville, Florida, for a year when Officer Friendly told my third-grade class that you could call 911 from home and the cops would show up right away. Nobody else seemed as stunned by his revelation as I was, but that was no surprise. I had been released from ESL at the start of my second school year in America, and there were a lot of things I was slow to learn.

Like, for example, why people called me “Rod.” I thought it was because I was Russian or just scrawny, but one day Billy Spencer sang, “Have I told you lately that I love you . . .” at me and I figured out it was Rod for Rod Stewart because I had a bit of a mullet. Mama chopped it off, but the name stuck. The only people who used my real name were my teacher—Mrs. Thomas—and my ESL friend, Raluca, or I should say ex-friend, because she moved back to Romania over the summer without telling me. I tried not to take it personally.

Cassandra called me “Okey Dokey,” which was definitely closer to Oksana than “Rod.” We only talked after class, when we walked to the lobby so she could get picked up by her mom and I could cross the street to meet my grandmother behind the clump of palm trees where I made her wait.

But the day after the officer’s visit, Baba was flirting with Mr. Trevors, the crossing guard, by the front entrance, dangerously on display. Kids swarmed around like the ants in our kitchen, looking for their buses or parents or just their friends to walk home with, and nobody seemed to notice her. Baba squeezed the crossing guard’s arm, her fiery hair flying in all directions, her purple dress flailing about her high-heeled veiny legs.

Cassandra spotted her and said, “Yuck. Your mom is even older than my mom.”

“Oh,” she said, disappointed. “How old is she anyway?”

I knew my parents were thirty-one, but I had no idea how old Baba was. “No clue. Eighty, ninety, something like that,” I said. No one at school had spotted her before, and it made me twitch. I said, “You really think if I call the cops they’ll come?”

She rubbed her hands together. “Say, ‘Help! My grandma is trying to kill me!’ ”

“All right,” I said. As Baba caressed Mr. Trevors’s arms and then his stop sign, it sounded like the truth.

Maria Kuznetsova was born in Kiev, Ukraine, and moved to the United States as a child. She received an MFA in creative writing from the Iowa Writers' Workshop. She is the author of the debut novel Oksana, Behave! and her fiction and nonfiction have appeared in McSweeney's Quarterly Concern, The Southern Review, Guernica, The Threepenny Review, Crazyhorse, Slate, and elsewhere. She lives in Auburn, Alabama, with her husband and daughter and teaches at Auburn University. She is also a fiction editor at The Bare Life Review, a journal of immigrant and refugee literature. 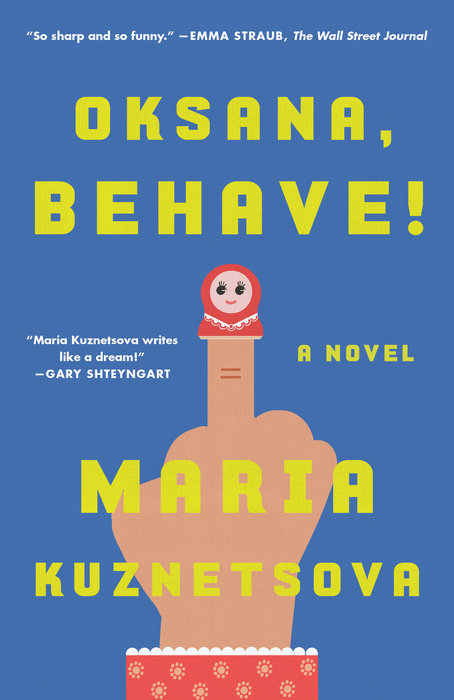