A cold case adds an extra chill to the holiday season as bestselling author Anne Perry whisks readers to an elegant home in the English countryside for a Christmas of secrets, soul-searching, and forgiveness.

As beautiful as it may be, their friends’ country house is not where Lady Vespasia wishes to spend Christmas with her new husband, Victor Narraway. She’d have preferred a relaxing holiday at home with him—especially as Victor, former head of the London Special Branch, seems to be hiding undercover dealings with the other guests who have gathered at the spacious estate.

As tensions grow, the young and beautiful Iris Watson-Watt becomes the center of several men’s focus. Unbeknownst to Vespasia, Iris carries a sensitive package that she must pass to Victor in the hope of unmasking a British traitor. While Victor plots his moves, he is reminded of a similar case from twenty years before, when a young Frenchwoman also carried a clandestine message—one that resulted in her murder, unsolved to this day. Victor has always been tormented by his failure to protect her, and now, with all eyes on Iris, Victor must act fast before history repeats itself.

With the joy of Christmas at risk of being forgotten and Vespasia feeling alone with a distracted husband, Victor must ultimately learn to forgive himself in order to save both his country and the spirit of the holiday.

An excerpt from A Christmas Gathering

It was not the Christmas Vespasia had planned. Last year, in Jerusalem, had been unforgettable, filled with experiences that she could not even have imagined. They had changed her life and her beliefs about heaven and hell. But this year, the third since she had remarried, she had hoped to spend Christmas entirely with her husband: no adventures, not even any parties. So late in life, she had found the man she truly loved with all the passion, intelligence, and trust in her nature. She had already had her children and grandchildren, had fulfilled all the obligations that she was heir to in society. This was different. In a purely personal way, it was her own time of fulfillment.

But as the carriage swept up the long curved driveway through the country estate of Max and Lady Amelia Cavendish, Vespasia knew from the look on Victor Narraway’s lean, dark features that this was a duty he had steadied himself to face. His pleasure did not lie here any more than hers did.

They had discussed the visit only a little on the journey. It was to be a small gathering: old acquaintances spending Christmas together in the most charming surroundings. On the surface that was all it was. But beneath that, Victor would quietly, unnoticeable to anyone else, conduct some secret business. Vespasia knew no details, and she knew not to ask. Until a short while ago he had been head of Special Branch, the department under the aegis of the Home Office that dealt with anarchists, saboteurs, and all purveyors of secret terror. Enemies were hidden, and success depended upon subterfuge, lies, and misdirection. To Special Branch, success was when no disaster happened; indeed, when no one knew that there had ever been a threat.

The carriage came to a stop outside the magnificent façade of Cavendish Hall. A waiting footman opened the door and assisted Vespasia to alight, welcoming her by name. She thanked him and heard Victor’s footsteps on the gravel as he came round from the other side, quietly thanking the coachman as he did so.

The high, oak-­paneled front door opened and Max Cavendish stood on the step, his handsome face wreathed in a smile. It was some time since Vespasia had seen him, but he had changed little. Rather more gray in his hair, perhaps, but otherwise the same. He inclined his head, not quite a bow. He would do that only for the queen.

“Lady Vespasia, what a pleasure to see you. It has been far too long.” It was a polite remark without much meaning. Neither of them had been absent from society—­they simply had few interests in common. She had even fewer with his wife, Lady Amelia, except social rank and all the acquaintance and experience that that implied. Lady Amelia, like Vespasia, was the daughter of an earl; the title was her own, not her husband’s, a fact that she never allowed him to forget.

Vespasia smiled with devastating charm. She must play this as if she had nothing but pleasure in mind. “I am sure this Christmas will make up for every year we have missed.”

Cavendish began to say something else, then changed his mind. She was not one to be flattered, as he had learned years ago. In her youth she had been considered one of the most beautiful women in Europe, not just for her elegance of appearance but, far more than that, for her wit, her grace, and her bright courage to follow all her most passionate beliefs. As a young woman she had fought at the barricades in the revolutions that had set Europe afire with hope in 1848, now more than half a century ago! The darkness had closed over those hopes, but that passion had never left her. It was just that now, in her later years, it was a trifle more discreet.

“Delighted you could come, Lord Narraway.” Cavendish shook Victor’s hand. “I hope you had a pleasant journey?” He glanced at the sky. “Weather’s holding off, but I don’t think it will last. Still . . . everyone’s safely here. Do come in.” It was not necessary to add that the servants would follow with their luggage. As the new century began, many things were changing in England—­and everywhere else—­but some courtesies remained.

They went inside to the huge oak-­paneled hall with its marble-­paved floor and sweeping curved staircases on either side, the polished banisters ending in high, elaborately carved newel posts. It was decorated with paintings of Cavendish ancestors of note for one thing or another. Frequently it was for nothing more than having the money to afford a fine artist, but no one would be tactless enough to say so. They dated from the time of Charles I right up to the present.

“Trilby will show you to your room,” Cavendish went on. “Tea will be served in the blue drawing room at half-­past four. But of course, if you prefer, you can have it brought to your room.”

“Not at all,” Narraway said immediately, for both of them. “We will join everyone else.”

Such an answer, made without reference to her, confirmed Vespasia’s feeling that there was much about this Christmas invitation that Victor had not told her. Twice she had drawn in breath to ask him, then could not find words that did not sound critical or demanding. She may not know his exact motive but she did trust him.

Cavendish Hall had at least fifteen bedrooms spread throughout the three main wings. Vespasia and Narraway were shown to one of the nicest, off the main landing and to the back of the house: quiet and overlooking the rose garden and the small lily pond with its central fountain. Vespasia could imagine the sound of it in the summer, with a light breeze and sunlight sparkling on the water. Now the garden was tidied and bare, preparing for a sleep under the snow that was forecast before the new year. But they would be home again by then.

Their luggage followed them immediately, but of course the maid would unpack both their cases and put everything where it belonged.

“Are you coming down for tea?” Narraway asked, looking at Vespasia with some concern. It had been only a two-­hour journey from London to this rural spot in the middle of Kent, but not one she was used to. “Or we can . . .”

“Yes, of course I am,” she said with a smile. “I will probably find I know several of the other guests.”

A shadow crossed his face. To most people he was unreadable, as he intended. He had many skills in life, starting in the British Army in India, and then going to Cambridge and into law. He had crowned his career at Special Branch, climbing its ladder right to the top. He played by his own rules and had made both friends and enemies. He knew too much about almost everyone in government and society, and about many outsiders, too. Nobody doubted either his intelligence or his ability, but some were dubious about the core of his loyalties. Everyone had things they would very much prefer to keep private. Therefore, a man with so much knowledge was to be feared.

There was more silver in his dense black hair now, but otherwise he had changed little over the years since Vespasia had first met him. He was still lean, not a lot taller than she, but she was tall for a woman. His eyes were coal black, the darkest she had ever seen in an Englishman, and there was both wit and strength in his face.

“I’m sure you’ll find them interesting,” he said, referring to the guests. He was equivocating, and they both knew that.

Would she ask him why? No. It was not the right time.

“I will be ready in five minutes,” she told him.

She wondered again at his ulterior motive for accepting this invitation and, though she had managed a country house full of people for almost the whole of her life, she felt newly vulnerable. She cared so deeply to live up to Narraway’s standards, as well as to her own. 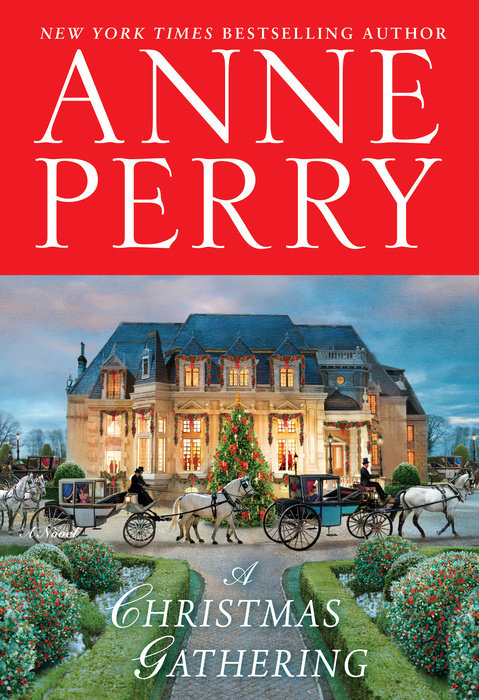