The Conversation That Sparked an Atheist Revolution

In 2007, Christopher Hitchens, Richard Dawkins, Sam Harris, and Daniel Dennett filmed a landmark discussion about modern atheism. The video went viral. Now in print for the first time, the transcript of their conversation is illuminated by new essays from three of the original participants and an introduction by Stephen Fry.

At the dawn of the new atheist movement, the thinkers who became known as “the four horsemen,” the heralds of religion's unraveling—Christopher Hitchens, Richard Dawkins, Sam Harris, and Daniel Dennett—sat down together over cocktails. What followed was a rigorous, pathbreaking, and enthralling exchange, which has been viewed millions of times since it was first posted on YouTube. This is intellectual inquiry at its best: exhilarating, funny, and unpredictable, sincere and probing, reminding us just how varied and colorful the threads of modern atheism are.

Here is the transcript of that conversation, in print for the first time, augmented by material from the living participants: Dawkins, Harris, and Dennett. These new essays, introduced by Stephen Fry, mark the evolution of their thinking and highlight particularly resonant aspects of this epic exchange. Each man contends with the most fundamental questions of human existence while challenging the others to articulate their own stance on God and religion, cultural criticism, spirituality, debate with people of faith, and the components of a truly ethical life.

Praise for The Four Horsemen

“This bracing exchange of ideas crackles with energy. It’s fascinating to watch four first-class minds explore a rugged intellectual terrain. . . . The text affords a different, more reflective way of processing the truly vital exchange of ideas. . . . I commend the book to those seeking an honest reckoning with their religion—and those curious about how the world looks from a rigorously naturalistic and atheistic point of view.”—Pittsburgh Post-Gazette

“The full, electrifying transcript of the one and only conversation between the quartet of luminaries dubbed the ‘four horsemen’ of the New Atheism, which took place in Washington, D.C., in 2007. Among the vast range of ideas and questions they discuss: Is it ever possible to win a war of ideas? Is spirituality the preserve of the religious? And, are there any truths you would rather not know?”—The Bookseller (UK) (starred review)

An excerpt from The Four Horsemen

Ever since the phrase ‘the New Atheists’ appeared in print, I have found myself celebrated or abused in the same breath with Richard Dawkins, Daniel Dennett and Christopher Hitchens. Needless to say, I’ve been greatly honoured by the association. It has, however, conveyed a false sense that we often schemed together in person. Although two or three of us would occasionally meet at conferences or other events, the book you are about to read provides a transcript of the only conversation the four of us ever had.

Christopher died in 2011, which gives this record a special poignancy. There is no question that his absence has been keenly felt in recent years. More times than I can count, strangers have come forward to say, ‘I miss Hitch.’ Their words are always uttered in protest over some fresh crime against reason or good taste. They are spoken after a bully passes by, smirking and unchallenged, whether on the left or on the right. They have become a mantra of sorts, intoned without any hope of effect, in the face of dangerous banalities or lies. Often, I hear in them a note of reproach. Sometimes it’s intended.

I, too, miss Hitch. But I will resist the temptation to offer further eulogy here. After all, the time will come when the rest of us have also left the stage. However, it seems that a record of our conversation will remain. We filmed it almost as an afterthought. I’m very glad we did.

Treating Richard, Dan, Christopher and me as a four- headed atheist has always elided significant differences of emphasis and opinion, but it was fair enough on the important points: Is there a distinction between believing things for good reasons and believing them for bad ones? Do science and religion differ in the degree to which they observe this distinction? Put this way, the debate is over before it even begins.

However disparate our interests, each of us was acutely aware that religious dogmatism hinders the growth of honest knowledge and divides humanity to no necessary purpose. The latter is a dangerous irony, of course, because one of religion’s most vaunted powers is that it unites people. It does that too, but generally by amplifying tribalism and spawning moralistic fears that would not otherwise exist. The fact that sane men and women can often be found doing good for God’s sake is no rejoinder here, because faith gives them bad reasons for doing good when good reasons are available. These are points that each of the four of us has made again and again, whether to applause or to stony silence.

In truth, not much need be said to close the door on belief in an omniscient, omnipotent and benevolent deity of the sort imagined by Christians, Muslims and Jews. Open any newspaper, and what do you find?

Today, a set of identical twin girls born with microcephaly in Brazil. How does something like this happen? Their mother was bitten by a mosquito carrying the Zika virus – which God, in his abundance, also made. Among the many unhappy effects of this virus is to produce tiny heads, tiny brains, and commensurately tiny lives for the offspring of any woman unlucky enough to be infected.

Imagine the woman herself a few months ago, doing everything within her power to prepare a happy life for her unborn daughters. Where does she work? A factory. How often does she pray? Daily, no doubt.

But at the crucial moment she sleeps. Perhaps she’s dreaming of a world better than the one we live in. Pic- ture a lone mosquito finding her open window. Picture it alighting upon her exposed arm. Will an omnipotent, omniscient and wholly benevolent God muster the slightest defence? Not even a breeze. The mosquito’s proboscis pierces her skin immediately. What are the faithful to believe at this point? One suspects they know that their God isn’t nearly as attentive as he would be if he actually existed.

So there was nothing to stop this tiny monster – descended from a long line of monsters that have been spreading disease for some 200 million years – from drinking this woman’s innocent blood and, in return for a meal, destroying the lives of her unborn girls.

The facts of a single case dismantle whole libraries of theological hairsplitting and casuistry. And yet the hor- ror compounds. Picture the woman noticing the welt on her arm the next morning – just a minor annoyance in a life soon to be filled with tragedy. Perhaps she’s heard reports of Zika and knows how the virus is spread. Her prayers now acquire a special fervour. To what end? Can the consolations of a faith so utterly misplaced outweigh the irony of worshipping a deity this impotent or evil – or, indeed, imaginary?

In the absence of God, we find true sources of hope and consolation. Art, literature, sport, philosophy – along with other forms of creativity and contemplation – do not require ignorance or lies to be enjoyed. And then there is science – which, apart from its intrinsic rewards, will be the true source of mercy in the present case. When a vac- cine or a cure for Zika is finally found, preventing untold misery and death, will the faithful thank God for it?

No doubt they will. And so these conversations must continue . . .

CHRISTOPHER HITCHENS was born in 1949 in England and was a graduate of Balliol College at Oxford University. He was the father of three children and the author of more than twenty books and pamphlets, including collections of essays, criticism, and reportage. His book, god Is Not Great: How Religion Poisons Everything, was a finalist for the 2007 National Book Award and an international bestseller. His bestselling memoir, Hitch-22, was a finalist for the 2010 National Book Critics Circle Award for autobiography. A visiting professor of liberal studies at the New School in New York City, he was also the I.F. Stone professor at the Graduate School of Journalism at the University of California, Berkeley. He was a columnist, literary critic, and contributing editor at Vanity Fair, The Atlantic, Slate, Times Literary Supplement, The Nation, New Statesman, World Affairs, Free Inquiry, among other publications. Christopher Hitchens died in December 2011 at the age of 62.

Sam Harris is the author of the New York Times best seller, The End of Faith: Religion, Terror, and the Future of Reason, which won the 2005 PEN Award for Nonfiction. He is a graduate in philosophy from Stanford University and has studied both Eastern and Western religious traditions, along with a variety of contemplative disciplines, for twenty years. Mr. Harris is now completing a doctorate in neuroscience, studying the neural basis of belief, disbelief, and uncertainty with functional magnetic resonance imaging (fMRI). His work has been discussed in The New York Times, The Los Angeles Times, The San Francisco Chronicle, The Economist, and New Scientist, among many other journals, and he has made television appearances on The O'Reilly Factor, Scarborough Country, Faith Under Fire, and Book TV.

The Conversation That Sparked an Atheist Revolution 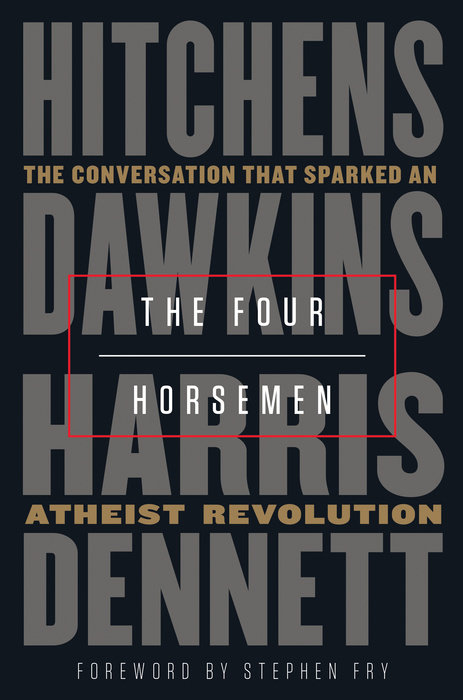