The Untold Story of the Family Behind the Jewelry Empire

The Cartiers is the revealing tale of a jewelry dynasty—four generations, from revolutionary France to the 1970s. At its heart are the three Cartier brothers whose motto was “Never copy, only create” and who made their family firm internationally famous in the early days of the twentieth century, thanks to their unique and complementary talents: Louis, the visionary designer who created the first men’s wristwatch to help an aviator friend tell the time without taking his hands off the controls of his flying machine; Pierre, the master dealmaker who bought the New York headquarters on Fifth Avenue for a double-stranded natural pearl necklace; and Jacques, the globe-trotting gemstone expert whose travels to India gave Cartier access to the world’s best rubies, emeralds, and sapphires, inspiring the celebrated Tutti Frutti jewelry.

Francesca Cartier Brickell, whose great-grandfather was the youngest of the brothers, has traveled the world researching her family’s history, tracking down those connected with her ancestors and discovering long-lost pieces of the puzzle along the way. Now she reveals never-before-told dramas, romances, intrigues, betrayals, and more.

The Cartiers also offers a behind-the-scenes look at the firm’s most iconic jewelry—the notoriously cursed Hope Diamond, the Romanov emeralds, the classic panther pieces—and the long line of stars from the worlds of fashion, film, and royalty who wore them, from Indian maharajas and Russian grand duchesses to Wallis Simpson, Coco Chanel, and Elizabeth Taylor.

Published in the two-hundredth anniversary year of the birth of the dynasty’s founder, Louis-François Cartier, this book is a magnificent, definitive, epic social history shown through the deeply personal lens of one legendary family.

An excerpt from The Cartiers

April 30, 1898. Springtime in Paris. Crowds were gathered outside the Church of the Madeleine, an imposing neoclassical building just to the northeast of the Élysée Palace, hoping to catch a glimpse of the sixteen-year-old bride as she arrived with her father. Inside, the Parisian fashion crowd were already at their pews. Eyeing one another’s outfits and jostling for the best view of the aisle, they were eager to see what the granddaughter of the world’s first celebrity designer would wear on the most important day of her life.

Up by the altar, the good-looking twenty-three-year-old groom was feeling uncomfortable. Under normal circumstances, Louis Cartier would have relished being the center of attention, especially surrounded by the crème de la crème of French society, but this was far from a normal day. Imploringly, he looked toward his father, who signaled encouragingly at the hundreds who had turned out to witness the union of two great families. Or rather, one great family, the Worths, and another family that still aspired to greatness. While the House of Worth was famous for revolutionizing Parisian fashion, the House of Cartier was still relatively unknown.

Just a few days earlier, Louis had gone to his father, Alfred, in desperation. He couldn’t marry this girl, he had pleaded. She wasn’t right. He understood that an alliance with her family would be good for their business, but what about his life? She would make him miserable. She wasn’t like other girls: she was somber one minute, hysterical the next. His fourteen-year-old brother, Jacques, had spotted it too: “I spent several afternoons alone with her and I was struck by her strangeness, her melancholy, and her sense of not being completely there.”

Later Jacques would recall how, soon after meeting Andrée-Caroline, she had insisted he read several morbid books, something that had surprised him given her young age. While he was reading, she “stayed silent for many hours and seemed completely absent of spirit. But occasionally she acted excessively gay for no apparent reason.” He couldn’t help but judge her to be “ill of mind.” And he knew what he was talking about. “I have . . . witnessed the existence of nervous crises before.” He was referring to his mother, Alice.

Louis had begged to call the wedding off. Alfred, who himself had entered into an arranged marriage over two decades earlier for the good of the family firm, would not hear of it. The two ended up having the almightiest row. Jacques, asked by Louis to be present, was shocked by the force of Alfred’s reaction: “I attended a scene where my father pushed him into marriage, seizing him by the arms and forcefully expressing his concern over the future of the family and the business. . . . Without this obligation in which he was trapped, I am sure that my brother would have broken off the engagement.”

But there was no way out. With Louis standing by the altar, the congregation looked back toward the large church doors where the silhouette of Andrée-Caroline appeared next to her father, and with every step that his bride-to-be took toward him, past the exquisitely arranged spring flowers on the end of each pew, Louis tried to master his discomfort. As he lifted her veil, he half-flinched to see a familiar absent look in her eyes. She would go through the motions of the wedding with “an unconscious air.” Jacques, standing up by the altar alongside his brother, would later remember how Andrée-Caroline’s “lack of reverence/recollection shocked me . . . I believe her to be ill, a young girl . . . to whom the idea of consent cannot have any value.”

If that was so, the newspapers were blissfully unaware. The Paris broadsheets only gushed about the crowds gathered outside the magnificent Greek-temple-like church in order to watch a “deliciously pretty” bride in the “radiance of her sixteenth year.” They were far more concerned with her family than anything else. She was, after all, descended from the great Monsieur Charles Frederick Worth himself, who “has rendered great services to France by developing—unbeknown to him—the luxury industry.” Although the paper’s comments on Worth and French luxury could have provided a neat segue into a brief description of Cartier as a family firm in the jewelry trade, neither the Cartier family nor firm was mentioned. In fact, so obscure was the young Louis Cartier that Le Figaro had to clarify, not once but twice—on consecutive days—that the groom of Andrée-Caroline was not the other, much better known Louis Cartier, the father of the Marquis de Villefranche.

This was why Alfred was so adamant that his eldest son had to follow his orders. Arranged marriages were not uncommon in French society, and this one would forge a lasting alliance between the relatively unknown (at least beyond Paris) Cartiers and the internationally celebrated Worths. After Charles Frederick Worth had passed away in 1895, his business had been taken over by his two sons, Gaston and Jean-Philippe. Under normal circumstances, the Cartiers would have struggled to marry into the Worth dynasty, but as Andrée-Caroline carried the stigma of having been born illegitimately, she could not marry into aristocratic circles. Jean-Philippe, keen to see his daughter taken care of by a respectable husband, had welcomed Alfred’s interest on behalf of his eldest son. And just as Louis-François had negotiated his son’s marriage contract with the Griffeuille family more than two decades before, so had Alfred negotiated Louis’ future union.

The terms were favorable for the Cartiers. In return for Louis marrying his love child, Jean-Philippe offered not only a very handsome dowry of 720,000 francs (about $3.85 million today) but also introductions to the world’s best luxury clients. When J. P. Morgan heard that the granddaughter of his late friend Charles Frederick Worth was to marry Louis, he called on the groom-to-be, promised him his future patronage, and bought $50,000 of jewels on the spot.

When Alfred first voiced the arranged marriage idea to his son, Louis had been happy to go along with it. Worth was one of the most famous names in Paris, and Louis, who didn’t shy away from the limelight, wasn’t averse to being linked to such celebrity. Though he hardly knew Andrée-Caroline, she was easy on the eyes (his nickname for her when they were courting was said to be So Pretty), and he was astute enough to see how the union would help his family business. The more time he had spent with his bride-to-be, however, the more his doubts had grown. By the time he had the confrontation with his father just before the wedding, he had made a decision. He would go ahead with the marriage only if his father would consent in advance to a divorce in the future, if as suspected the marriage turned out to be an unhappy one. Alfred, desperate that nothing should impede the arrangement he had made with Jean-Philippe, agreed to his son’s sole condition but countered with an additional demand: If a divorce was sought by Louis, he would consent, but only after ten years. That would give the marriage a chance to succeed and also give Cartier enough time to benefit from an alliance with the House of Worth without upsetting Jean-Philippe too soon.

Ever since they were children, the Cartier brothers had dreamed about building the family business into the world’s leading jewelry firm. By 1898, when Louis joined his father in the showroom at 9 Boulevard des Italiens, Cartier had a loyal domestic client base and a few faithful foreign visitors, but it was still some way off being known outside France. They longed for the kind of American grandes dames clients whose lives were summed up so succinctly by Alice Roosevelt Longworth. The Washington press recalled how they “bought clothes in Paris, came trotting back, perhaps went up the river for a brief moment, then to Newport, perhaps up the river again, New York for Christmas, worried through the winter, and then it was time to go to Paris again for more clothes and then to London. It was like living in a perpetual Christmas play.”

Adjoining the majestic Place Vendôme, Rue de la Paix was the first port of call for luxury purchases in Paris. With Worth at number 7, the jeweler Mellerio at number 9, and the Hôtel Westminster at number 11–13, it was inundated with stylish ladies and wealthy admirers keen to impress them. Louis-François and Alfred had always known that location was key, and now Louis, having seen firsthand the caliber of clients who visited his father-in-law in the elegant Worth showroom, understood it too. He also, thanks to his wife’s ample dowry, had the finances to make such a move possible. When part of the Hôtel Westminster was auctioned off in 1899, Cartier bought one of the two shops at number 13, with a lingerie firm taking the other half. The expansion into the wide-fronted store (encompassing the full 11–13 Rue de la Paix) would take place more than a decade later in 1912. For now, half of number 13 was quite sufficient. The new showroom was fitted out with all the latest modern technologies, including electricity (Cartier was one of the first firms to have electricity in Paris) and a telephone. They even had their own automobile for deliveries.

A graduate in English literature from Oxford University, Francesca Cartier Brickell is a direct descendant of the Cartier family. Her great-great-great-grandfather founded Cartier in 1847. Her late grandfather Jean-Jacques Cartier was the last of the family to manage and own a branch of the world-famous jewelry firm. She is a sought-after international lecturer on Cartier’s illustrious history and has given talks for major auction houses, museums, and societies. This book is the result of a decade of the author’s independent research into her family and the business they founded. She lives with her husband and children in London and the South of France.

The Untold Story of the Family Behind the Jewelry Empire 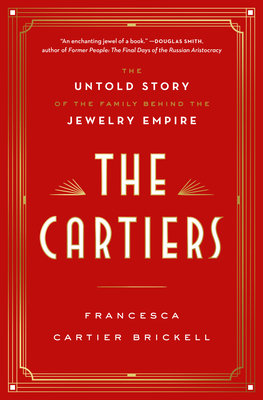